Recently we had the pleasure of having Professor Nick Crafts give the first of our series of City Horizons talks in the Shard. Nick looked at the varying performance of our cities over the last century, and the implications that this has for future growth.

One particularly interesting point was the often unseen costs that occur as a result of not expanding our most successful cities for the residents of those cities.

The costs of expansion are very clear to the electorate – new buildings swallow up green fields and block views, while more cars on the road increase congestion. What are much less clear are the benefits of increasing the size of a city, which result from increases in productivity. Nick used the chart below to illustrate how these costs and benefits play out. 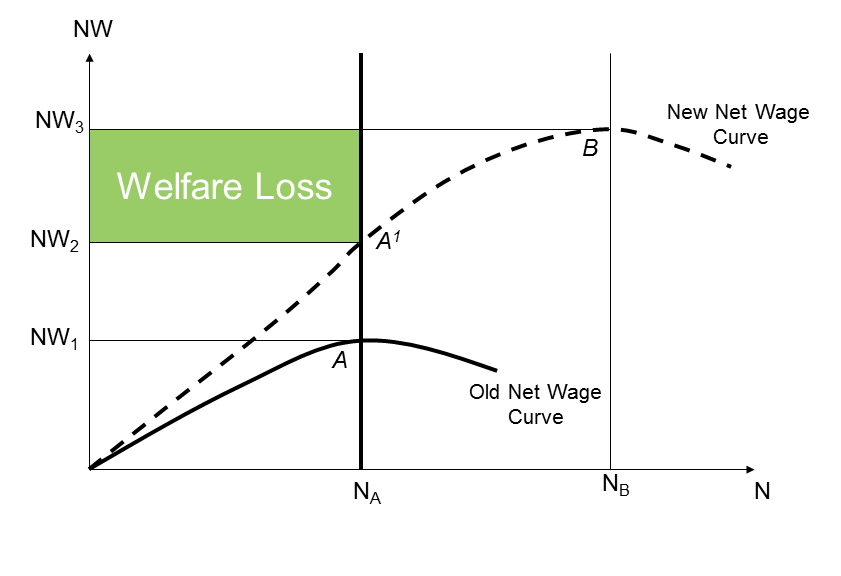 Let’s say we have city called Smallville. For the types of industries Smallville has, it is perfectly sized at size N­­a. Any costs (such as congestion) of increasing the size of the city would outweigh the benefits (namely increased wages) leaving the residents worse off.

But there is opposition to expanding Smallville, and a small but vocal band of residents come together to oppose any such expansion. They don’t want developers to build on the green fields on the edge of town because it will block their view of the countryside. And they don’t want more cars going past their houses that results from more people living in the area.

The complaints lodged by this group win out, and the Smallville planning department turns down the planning applications to increase the size of the city. The loss aversion of this group leads them to protect what they already have. But overall they lose out because they don’t benefit from higher net wages. This loss is shown by the green box on the chart. And these are the losses that fall only on the current residents of the city – they do not include the costs that fall on people who live elsewhere who are prevented from taking advantage of the opportunities in the city because of its lack of expansion.

While this all sounds very theoretical, it can be seen in the development of our cities. During the industrial revolution, cities such as Manchester and Liverpool expanded rapidly as new technologies developed. This was a good thing for the people who lived there, as their net wage increased. But during the current knowledge revolution cities such as Oxford and Cambridge, which have been well placed to benefit from the birth of new, knowledge-based industries, have not expanded in the way that they could have. While wages have undoubtedly increased in these places, they most likely have not increased as much as they could have had they expanded more rapidly.

The implication is that the residents of Oxford and Cambridge are worse off than what they otherwise would have been.

Our second City Horizons event will be on Comeback Cities and will be given by Professor Ed Glaeser on 21 May. We’ll be announcing details of the tickets very soon.