This April will see the first of a series of increases to the wage floor as part of the introduction of the ‘National Living Wage’, which the government hopes will reduce the gap between the lowest paid and the average paid worker. More details are expected in tomorrow’s Budget statement, but while the debate will no doubt continue as to the impact that this change will have, we thought we’d have a look at which cities will be most affected.

We modelled the number of jobs in cities in 2015 that paid below the £7.20 threshold that will be introduced next month. As the map shows, cities in the North tend to have a much greater share of jobs paying an hourly rate under this threshold (Southend is the only exception). For example, around one in 20 jobs fall below the threshold in Oxford and Crawley. But in Doncaster and Burnley, the two cities with the highest shares, this figure is more than one in five. 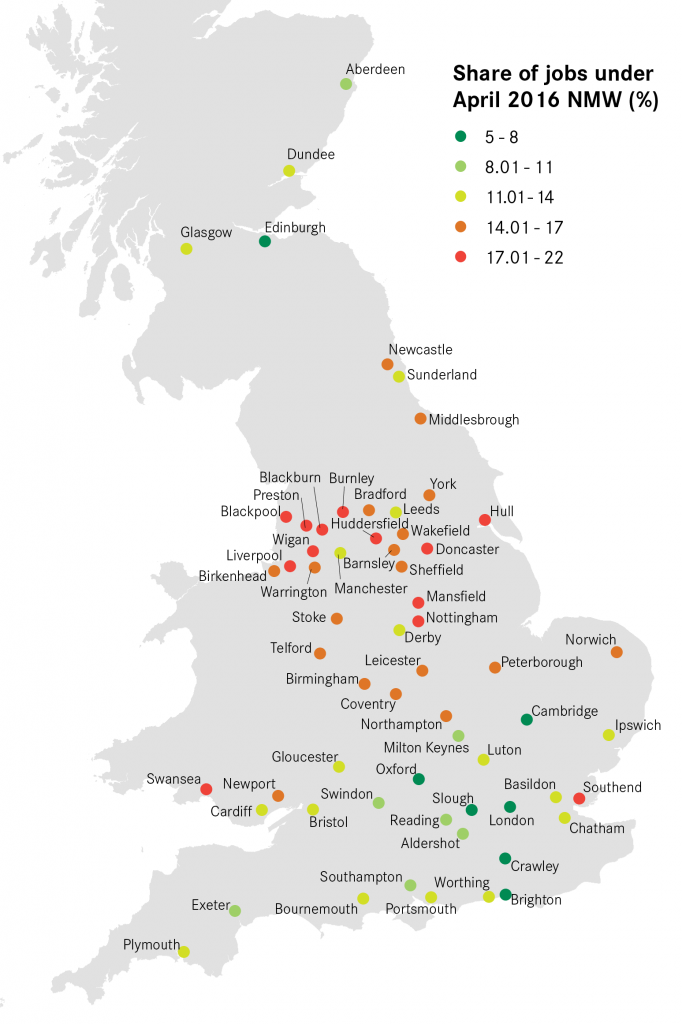 The implications that the increase in April and the subsequent increases will have for these cities is unclear. The economic textbooks say that an artificial increase in the wages of low-paid jobs will lead to job losses. But the counter argument put forward by the supporters of the raise is that these job losses did not happen in 1997 when the National Minimum Wage was introduced.

But in some ways this debate, while important, ignores the cause of low wages.

The bigger issue is that for decades, cities like Burnley and Doncaster have struggled to attract investment from higher paying businesses. Our Century of Cities work showed that it is those cities that have been able to reinvent their economies over the last 100 years – replacing job losses in more traditional, low-skilled areas with higher-skilled occupations – that are our strongest performing cities today in terms of wages, productivity and welfare spending. As shown below, the cities with the highest share of low paid jobs have a much greater reliance on manufacturing, which tends to be low skilled in these areas, a larger share of publicly-funded jobs, and much smaller shares of knowledge intensive business services (KIBS) jobs, which tend to be higher skilled and better paid.

So while the argument of the impact of the ‘National Living Wage’ will no doubt continue, what is clear is that in order to be successful in the future, our weaker cities need to go through a process of reinvention, attracting business investment that shifts their economy to a mix of businesses that make them more productive. Without doing this, even if the ‘National Living Wage’ doesn’t have an immediate adverse impact on the number of jobs in their economies, globalisation will.

What should the Government do about the Teesside steel closure?