In the aftermath of the EU Referendum commentators have put forward a range of reasons as to why the country voted the way it did. But as the charts in last week’s blog showed, economic disenfranchisement, which has persisted since the 1970s, either directly or indirectly, appears to have had something to do with the discontent people have shown with political institutions. And countless policy efforts over this period have failed to sufficiently address this.

Those cities that polled a larger number of leave votes tend to have lower-skilled economies. And as the chart below shows, this applies for both services and manufacturing. In cities that voted remain, for every one low-skilled job in services, there was a high skilled job. But this figure was much lower for those cities where leave polled more than 60 per cent of the vote. While not as acute, this holds for manufacturing too. 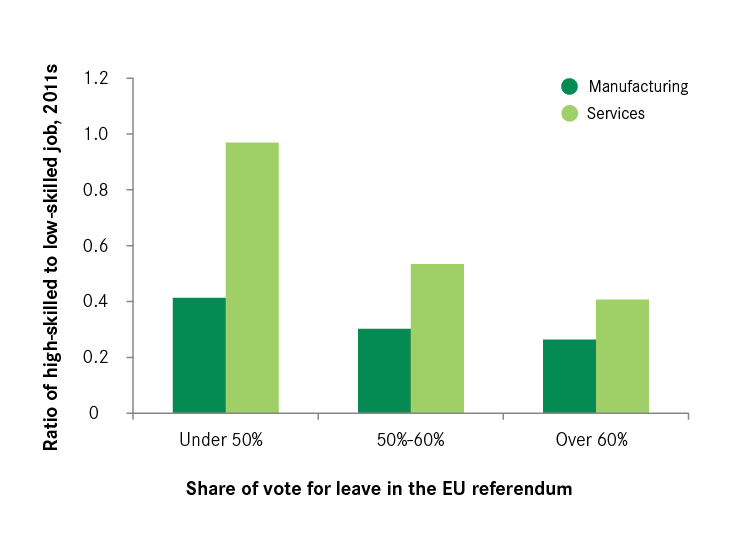 This has happened because the cities that voted remain have been able to reinvent their economies. As our Century of Cities work shows, these cities have adjusted from a lower-skilled economy based around traditional manufacturing to a more knowledge-based economy based on high value services and manufacturing. Those that voted leave tend to be ‘replicators’ – in the face of globalisation they have swapped coal mines for call centres, replacing one set of low-skilled jobs for another set. The result is that they struggle on a range of economic indicators today.

Policy hasn’t ignored the struggles of the replicators, far from it. Regional policy is over 80 years old, and vast sums of money have been spent and numerous programmes and initiatives launched in these places, both from the UK Government and more recently through EU funds. But it hasn’t had the desired impact because it has done little to equip people and places to respond to the changes brought about by globalisation. We’ve had lots of money for new buildings and dual carriageways, with little assessment as to whether lack of space or congestion are the fundamental barriers to business growth in these places. More counterproductively, we’ve had a string of policies and rhetoric (such as the industrial interventions of the 1970s) about preserving what is in decline, rather than adapting those industries, and the place more generally, to the future.

This is a big problem – if places are to reinvent themselves, then policy must assist them principally through tackling the root cause of their struggles. Most importantly, industries offering high-paid, high-skilled work, of which the UK is continuing to specialise in, but which too many replicator economies struggle to attract, require a highly-qualified workforce with intermediate and graduate level skills. Despite this, policy has given much less attention to addressing the skills challenges that all of our struggling cities face.

If places are to turn around, then we must learn from the mistakes of the past. Significant political pressure is already building for more to be done to support struggling local economies, particularly in the North of England. It is vital that communities feel politicians are acting to address their concerns in the short term. But we need to avoid the risk that this simply translates into investing most of the limited funds available into ‘visible’ commitments to improve the physical infrastructure of places, when we know that simply building another new road or rail line alone will have little impact on the jobs and wages of the people living there.

The evidence shows that improving the skills of individuals will have a positive impact on their employment prospects. There is no guarantee this will be enough to transform the cities’ economies; it certainly won’t be enough alone. But history tells us that failing to address these skills challenges now almost certainly guarantees that these cities will continue to struggle in the future.

A Century of Cities
The Future of Work

What should the Government do about the Teesside steel closure?