The UK has pledged to reach net zero carbon emissions by 2050. Centre for Cities research shows that our cities and largest towns will have a big role to play in meeting this target.  Our ongoing work on net zero sets out what needs to change if urban areas are to lead the way in decarbonising the UK’s economy, without leaving people and places behind.

What is net zero?

Net zero refers to the balance between the greenhouse gas emissions going into, and being removed from the atmosphere. It does not mean zero emissions, as in some sectors like agriculture, cutting emissions down to zero will be very difficult to achieve. Instead, it means that any residual emissions are fully offset through ‘carbon sinks’, either natural (like trees) or artificial (like carbon capture and storage technology).
Back to top

Why is net zero important?

The net zero objective by 2050 was internationally agreed upon as the only way to mitigate climate change, keep global warming below 1.5C and avoid irreversible damage to the planet. It was enshrined into UK law in June 2019.
Back to top

How can the UK reach net zero emissions?

In the past three decades, the UK has made good progress in cutting emissions, as greenhouse gas levels halved since 1990. But there is still a long way to go. Firstly, these are only UK production-based emissions- not emissions associated with the consumption of goods or services imported from elsewhere. Secondly, the remaining half of the challenge is likely to be more difficult: so far, most reductions came from the industry sector, with a shift away from carbon-intensive manufacturing and energy sources like coal. Meeting the net zero target will require cutting emissions in two sectors which have seen little progress so far: transport and housing.
Back to top

What are the main drivers of carbon emissions?

The first is industry and commercial activity, which in 2018 accounted for 37 per cent of all carbon emissions. These include emissions stemming from the burning of fossil fuels for electricity generation and the production of goods, like manufacturing.

The second is transport- about 36 per cent of all carbon emissions. Road travel (emissions from road vehicles powered by fossil fuel) is the largest contributor, with petrol and diesel cars emitting the most- around 60 per cent of all transport emissions. That share remained fairly stable since the 1990s, as vehicle improvements were offset by large increases in traffic and the rise of carbon-heavy vehicles like SUVs.

The third is domestic- 27 per cent of emissions– which includes gas and electricity consumption and the burning of fossil fuels used for cooking or heating homes. The quantity of emissions is influenced by a number of factors including the types of fuel used; the age, type, quality and condition of the property (especially its size and insulation), and other household characteristics.
Back to top

Why do carbon emissions levels vary between cities and rural areas?

The 63 largest cities and towns in the UK generate about 45 per cent of all carbon emissions. Large cities like London have, in absolute terms, high levels of emissions given their size and economic activity.

There are two main reasons for this. The first is that high-emitting industrial activity tends to be located outside of cities. The second is that carbon emissions are largely influenced by the characteristics of the built environment: density, something that is specifically unique to cities, encourages greener lifestyles. In dense urban environments, low-carbon transport options are more accessible because journeys are shorter and can more easily be walked or cycled. Public transport is more viable, too, because of higher demand. And denser housing, like flats or terraced houses, are more energy-efficient, resulting in lower carbon emissions.
Back to top

Which UK cities have the highest and lowest carbon footprints?

Carbon emissions per head vary between cities. Swansea and Middlesbrough have the highest carbon footprint, likely a result of the steel and chemical industries within their boundaries. Ipswich is the city with the lowest carbon footprint per head, followed by Worthing and Brighton.

The role played by different emission sources varies between places, suggesting they have different challenges to address. Cities like Warrington, Milton Keynes and Peterborough all have high levels of transport emissions- all are new towns built around the car with low levels of public transport uptake. In Blackpool, Mansfield and Barnsley, domestic emissions are the highest, as a lot of the housing stock is older and needs retrofitting.
Back to top

Net zero: what is the carbon footprint of my city? 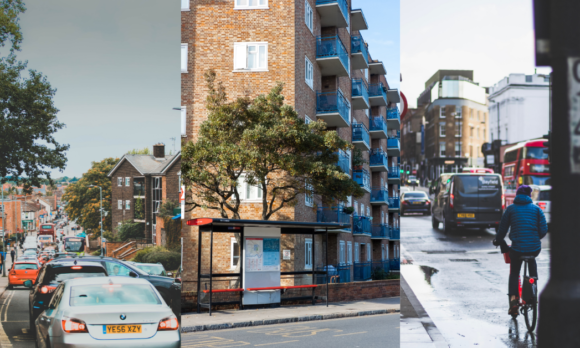 Urban planning is likely to be an important- and often underestimated- tool in the race to net zero emissions. This is because of the influence of the built environment on daily lifestyles, from how people get around for their commutes and leisure trips, to the type of homes they live in.

Urban planning determines how land is being used, where new developments, whether residential or commercial, are located; and what type of buildings are built. For instance, building denser housing near existing public transport networks and jobs is likely to have a much more beneficial impact on carbon emissions than sparse, low-density developments in the outskirts which lock people into car-dependent lifestyles.

More widely, planning principles and decisions which are set out in a local plan also influence the carbon footprint of a given area- for instance determining infrastructure like cycle lanes or district heating schemes.
Back to top

What role does local government play in achieving net zero?

Although they’re not directly responsible for local emissions (with the exceptions of the buildings or vehicle fleet they own), local governments can influence carbon emissions through a number of different levers.

As a local planning authority, they are in charge of designing the local plan and giving planning permission, which means they can influence the location and type of new developments. They have control over buildings’ emissions through building regulation standards. They are also partly in charge of transport planning, setting out policies and objectives for local transport: road management, cycle paths, parking policies, or charging schemes like Clean Air Zones are all in their remit. However, they often lack statutory powers to act, as they have no or little control over the infrastructure, service and funding for public transport.
Back to top

Which policies are needed to address transport emissions?

Here are Centre for Cities’ recommendations on how to cut emissions from the transport sector:

Why we need more electric vehicles, but fewer cars, to reach net zero 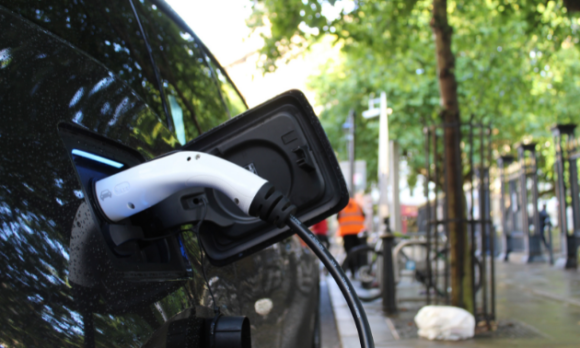 Which policies are needed to address domestic emissions?

Here are Centre for Cities’ recommendations on how to cut emissions from the housing sector:

It has often been suggested that remote-working is a solution to cut carbon emissions, particularly as a result of the Covid-19 pandemic which triggered a surge in home working patterns. While this might be the case in some instances, especially for people who would drive to work every day, it is important to not overestimate the impact this might have on carbon footprints. Commutes only account for 14 per cent of all car trips, so are not the largest contributor to emissions.

In a scenario where a household moves further away from a city centre because they do not need to commute, the impact is not clear-cut. Provided they did not use public transport for their commute, they might save carbon on that journey. However, they may end up using a car more for other purposes- which may explain why traffic is back to its pre-pandemic levels despite the fact that many people are still working from home.  As a result, their total carbon footprint would either remain unchanged or increase, especially if they moved to a larger home that uses more energy.
Back to top

Can the net zero agenda help deliver levelling up?

The net zero agenda is not incompatible with economic prosperity. Quite the opposite: shifting to a low-carbon economy presents a number of economic opportunities. It has been estimated that more than 250,000 jobs could be created through investment in a low-carbon future up and down the country, in industries like electric vehicles manufacturing or wind turbine engineering. The retrofit challenge is a good example: it would help create jobs in places that need it the most, and have been the most impacted by the current crisis- cities like Burnley, Blackpool or Bradford. To be in line with the levelling-up agenda, it is important to help places which are more reliant on carbon-intensive industries, where jobs will either be lost or disrupted. This should be done by providing targeted job support, investing in skills and providing workers with tools to find employment in a green economy.
Back to top

The latest on net zero

The UK has pledged to reach net zero carbon emissions by 2050. Our work looks at why and how cities and large towns are likely to play a disproportionate role in helping the UK to hit this target.

Oxford and Telford have very different carbon footprints per head. The way they are spatially planned might explain why.

Switching to electric vehicles will help us on the road to net zero, but to reach our destination most of us will need to ditch cars entirely.

Housing Net zero
Does working from home cut carbon emissions? Not necessarily – in fact, it can have the opposite effect

Intuitively, working from home would seem to help reduce carbon emissions. But people who move out of cities drive more and those working in poorly insulated homes turn the heating on.

How our spatial footprint dictates our carbon footprint: the denser the greener

Very few parts of the country account for large shares of its economic output.

A common sentiment in struggling towns is that they’ve been overlooked by government in favour of places further south, but this isn’t the source of their problems.

The UK and Ireland are both worried about land banking, but the common denominator is their planning systems.

The new deal finally solves the mismatched geography of the North of Tyne mayoralty.

The UK is in the grip of a cost of living crisis, and there is a clear North-South divide in how it is playing out across the country. Explore the latest data for your city or large town.

Are business parks hotbeds of innovation?

Business parks offer some benefits to certain types of new economic activity, but those in the suburbs of cities are more popular than those located in more remote locations.

Dundee’s expanding gaming sector does look to have helped turn the city’s fortunes around. Now policy should attempt to broaden its sources of growth to encourage the further expansion of its economy.

Just because northern towns and cities have a strong manufacturing past doesn’t mean they are well placed to attract manufacturing jobs of the future.

Three lessons that should guide the development of the Chancellor’s remoulded investment zones.