As we approach the general election, most parties have now set out their manifestos, and while the ultimate goal of the main candidates is similar – promoting a more inclusive and equal country – their strategies to achieve it are different. On the one hand, the Labour manifesto positions itself as ‘For the many not for the few’ by reducing inequality. On the other, the Conservatives want to move ‘Forward, Together’, pushing for policies that promote growth up and down the country. But what does this mean for cities? With the polls indicating a two horse race, we analyse mainly what Labour and the Conservatives have pledged on five key issues for city economies. 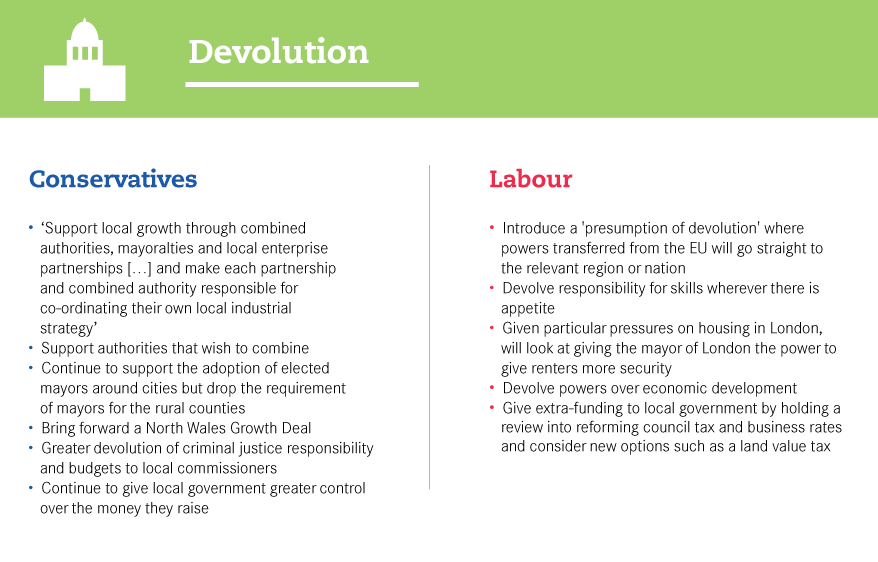 While in coalition, the Conservatives paved the way for devolving powers to cities with City and Local Growth Deals and, during the short two year parliament, saw the Cities and Local Government Devolution Act through to Royal Assent – which led to the election of six powerful new metro mayors. In 2017, the Conservatives want to see more metro mayors elected, and have identified Local Enterprise Partnerships (LEPs) and local and combined authorities as bodies that will help deliver their industrial strategy at the local level.

In contrast, the Labour Party limits its commitment to further devolution to those local authorities that have ‘an appetite for it’. Although pledging to introduce a ‘presumption of devolution’ by which powers transferred back from Brussels won’t stop in Westminster but will go at the level that is more appropriate for them, the language used is very much around regions, rather than local or combined authorities. Furthermore, their plan to set up a National Health Care and a National Education Service clearly shows that their focus is national rather than local.

Unsurprisingly, we would argue that committing to devolution for the long term is essential in particular for the biggest English cities, including London. Whether or not it features in a manifesto, responding to the London Finance Commission, and addressing the challenges around local government finance must feature over the next Parliament. 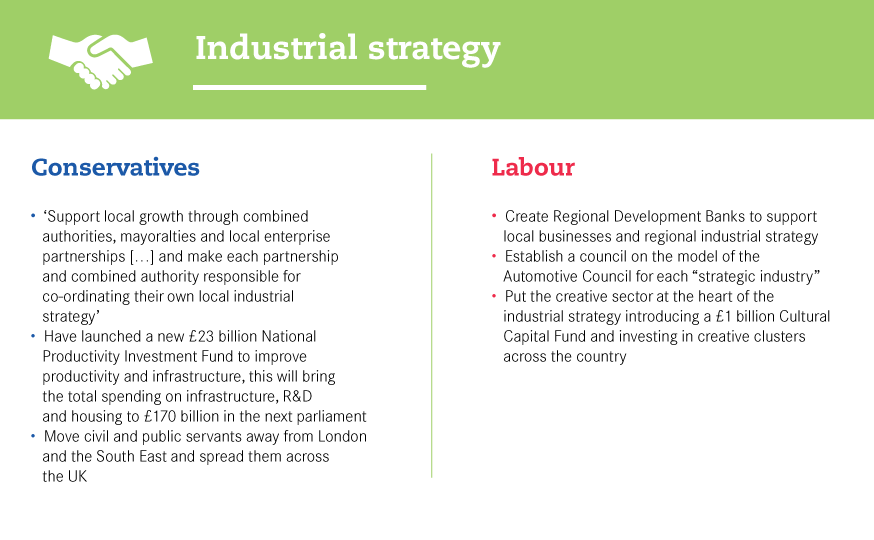 Whether to focus on a sector-based industrial strategy or a place-based one seems to be the main dividing line between Labour and the Conservatives.

The Labour Party’s plan for the Industrial Strategy represents a traditional sector-oriented approach, although their creation of Regional Development Banks is likely to help support local businesses and promote a regional strategy.

The Conservatives however, have pledged to deliver a national industrial strategy consisting of many local industrial strategies, co-ordinated by LEPs and local and combined authorities which will have the responsibility of delivering a plan relevant to their local needs. And, in an attempt to promote growth across England, they have also pledged to move civil servants and cultural institutions away from London and the South East.

Our recent work has shown that, for it to be successful, industrial strategy will need to focus on cities not sectors. The risk of pushing a handful of industries is that not only does it ignore other parts of the economy, but it can’t support growth of industries that don’t yet exist. Instead, by focussing on places, the industrial strategy can improve the attractiveness of these places for business investment, increasing their ability to attract new industries as they are formed.

Closely related to the industrial strategy, Labour in particular have committed to vast infrastructure improvements.

Labour set out specific plans for transport: from the completion of HS2 and of the Science Vale transport arc between Oxford and Cambridge, to the promotion of a high speed line connecting northern cities (Crossrail for the North) and a new Brighton Main Line for the South East. Labour will create a National Investment Bank to co-ordinate the Regional Development Banks and will invest £250 billion in a National Transformation Fund used to upgrade transport, housing, energy systems, communications and scientific research.

In contrast, the Conservatives pledge a high speed route connecting northern cities (Northern Powerhouse Rail) and confirm a continued commitment to both HS2 and Heathrow Airport Expansion. They also recommit to a National Productivity Investment Fund that will take total spending on infrastructure, research and development, and housing to £170 billion during the next parliament. They have also pledged to open new branches of the British Business Bank in cities across the country.

Large infrastructure projects are always going to be eye-catching. Our work shows that while improving the connection between Leeds and Manchester in particular will be important, bigger gains are likely to be had from improving transport within cities rather than between.

Once again, all parties promise to build more homes. Both Labour and Conservatives want to build at least a million houses by the end of the next parliament, with Labour setting aside half a million of those to be affordable.

While we would agree that more houses need to be built, they must be built in the places where we need them the most. As shown in our General Election 2017 briefing, the UK as a whole does not have a housing crisis, but the Greater South East certainly does. Yet, parties fail to capture this spatial picture. And with their pledge of building more houses ‘not just in the South East’, the Conservatives are at risk of missing the point. As we showed in 2014, by pledging to protect the Green Belt, all parties give up an opportunity to build more homes where we actually need them.

Both the Conservatives and Labour have bold plans for skills development and life-long learning. An efficient education system which endows people with the right skills relevant to business needs is essential for a successful industrial strategy, so the focus on improving technical education is a welcomed pledge present in both manifestos.

The Conservatives put education at the heart of their plan to make the United Kingdom a ‘Great Meritocracy’, stressing the importance of reducing differences among places, improving social mobility and focusing on technical and STEM subjects. They will deliver on these points by introducing new institutes of technology and specialist maths schools in every major city, establishing a UCAS-style portal for technical education and continuing their commitment of creating three million apprenticeships by 2020, with a focus on driving up their quality.

In contrast, Labour wants to promote life-long learning and guarantee access to education to everyone, and will do so by creating a National Education Service, scrapping university fees for everyone, offering free education in Further Education colleges and doubling the number of Level 3 apprenticeships by 2022.

Higher skills lead to stronger economic growth and productivity, so for both parties to focus on education from school onwards is welcome. This is particularly an issue in northern cities, and addressing this challenge will be key if politicians want to see a greater number of people across the country benefit from growth.

Forward for the many

May’s seemingly toned-down approach to devolution, and Labour’s talk of regions and national policies, moves us away from the ‘race to the top’ on devolution that we had in the last general election. Our work shows that if policy is to improve standards of living across the country, then it needs to identify and tackle the reasons why some places struggle to attract business investment. No manifesto deals sufficiently with this, and whoever wins will need answers to this problem if they are to succeed in bringing greater prosperity across the country.