Though social care, security, and fox hunting were all the big issues of the day, Britain’s cities were a key battleground in the election – yet no party managed to triumph. For both parties, urban voters are still in reach, and how the parties develop policy towards cities over the next period will be critical for the next election.

The first change we noticed is that Labour’s vote surged, seeing an urban swing of 6% compared to 4% nationally. But in individual cities, swings were swung in both directions. Labour’s advance was concentrated in London and the South, while the Conservatives made gains in cities in the North, the Midlands, and also in Scotland. Leaving aside Scotland, this reflects the emergence of two different urban economies – one open, dynamic, and increasingly Labour, and another that is struggling, frustrated with a lack of order, and increasingly Conservative.

At the last election in 2015, the Conservatives won the majority of the vote in just under half of all English cities, with Labour taking just over half. All Scottish cities were won by the SNP – reflecting opinion in much of the country. But last week the urban map started to change as more English cities voted for Labour, leaving the Conservatives with a majority of the vote in five fewer cities than in 2015.

But interestingly, while more cities particularly in the South have swung towards Labour, the Conservatives gained votes in the North and Midlands.

Cities in the North of England saw a 4% swing from the Conservatives to Labour; those in the South saw a swing of 10% to Labour. Labour actually saw swings against it in some of its urban heartlands, including Stoke, Middlesbrough, and Sheffield. This resulted in Labour’s one loss of the night – Mansfield, on a 17% swing away from Labour to the Conservatives. 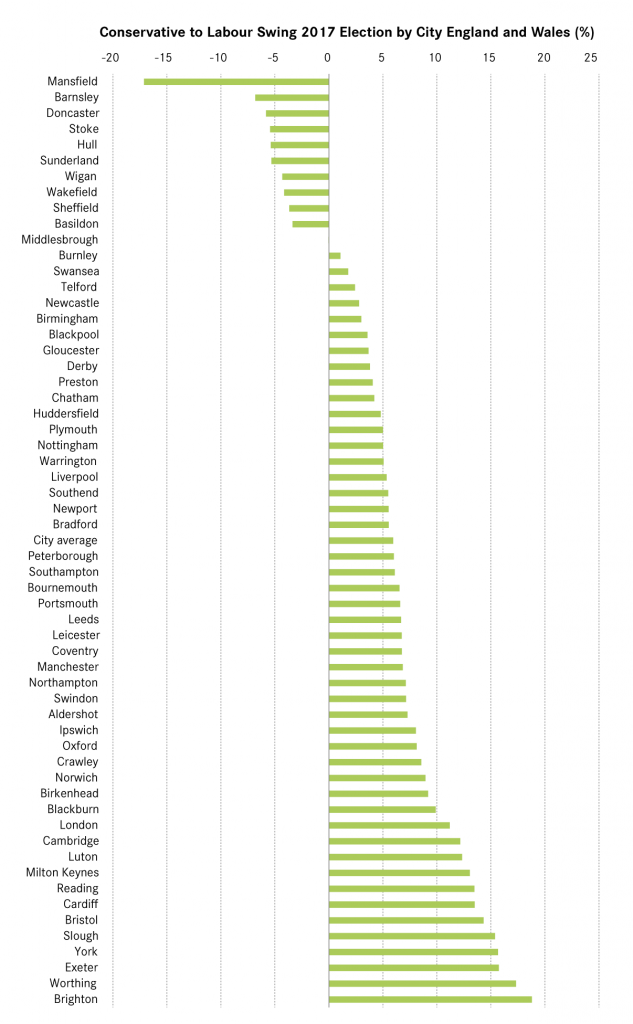 The characteristics of these cities may offer some explanation as to why this election saw a swing toward the Conservatives. Many voted to Leave the European Union, and may be seen as the ‘left behind’ places. While both Theresa May and Jeremy Corbyn focused on an inclusive rhetoric – for the many not the few; a country that works for everyone – the harder stance on Brexit proposed by the Conservatives, with a promise for restoring jobs from it, may have helped turn the dial towards the right.

That is in contrast to the more prosperous, urban South where a big issue is affordability, specifically in housing. In this election Labour have shown they are not just the party of urban Britain – but a specific kind of urban Britain, increasingly Southern, middle class, and potentially relatively highly skilled.

There are exceptions of course – for instance, Basildon swung to the Tories, and York to Labour – but even these outliers prove the broader rule. Labour is making gains in the cities that are successfully responding to economic and social change with more openness, while the Conservatives are advancing in the cities that are seeking a more orderly relationship with these developments.

The picture in Scotland is different with the four cities swinging to the Conservatives rather than to Labour, mostly at the expense of the SNP. This saw the Conservatives achieve a majority of the vote in Aberdeen, part of a return for the party to their historic heartlands in the Borders and North East Scotland, as well as gains in Dundee, Edinburgh, and Glasgow. In these three cities though, it is Labour who are in second place to the SNP, and who have seen its vote share stabilise and recover slightly from 2015. Each of the Welsh cities swung to Labour, who picked up support from every party, though again, the cosmopolitan Cardiff saw a much larger Labour swing than the more traditional cities of Swansea and Newport.

Overall though, the results in cities reflect the results in Parliament – a stalemate. Yet the swings have shown emergent patterns reflecting two halves of urban England – larger or at least growing cities, or ex-industrial cities where growth is stagnant and skills are low. However policymaking pans out over the next parliament, both of the main parties will need to recognise that there is a distinct split around the country, and politics reflects economics.

All cities need to see parties committing to growing their economies and supporting people into skilled work, and they need to see their place supported when the costs of growth become too high. For the Conservatives, that’s bringing back their traditional middle class supporters by improving housing affordability. For Labour, appreciating how and where local economic gains will be made might stop them losing the urban North altogether.