How can the next government improve prosperity?

As the UK prepares to go to the polls once again on 8th June, one theme has characterised the main political parties’ electoral campaigns – the need to raise prosperity and growth for people living across the country, as we prepare to leave the European Union. Slogans such as the Conservatives’ “building an economy that works for everyone”, or Labour’s “standing up for the many, not the few”, reflect a concern about the UK’s economic divides and so-called ‘left behind’ people and places, which many commentators believe drove the vote for Brexit last summer.

However, despite the increased focus on improving prosperity up and down the country, and a growing understanding in recent years of the diverse role that different places play in the economy, policy discussions about the economy are still largely national in focus.

In reality, the issues that underpin the economic divides which national leaders are pledging to address – such as productivity, skills and housing – play out very differently across the country. And for the next government to successfully tackle these issues, they must put in place policies which reflect this differing geography. In particular, the national economy clusters in cities – which account for just 8 per cent of land, but 54 per cent of the population and 60 per cent of jobs – and which should be central to any policies to strengthen the economy.

This piece sets out three big issues that the next Government must address if it is to improve prosperity and growth for the greatest number of people across the UK.

Productivity largely determines standards of living. And this is why there has been so much concern over the UK’s poor productivity performance in recent years – as the Chancellor pointed out in the Autumn Statement, it takes a German worker four days to produce what a UK worker does in five. 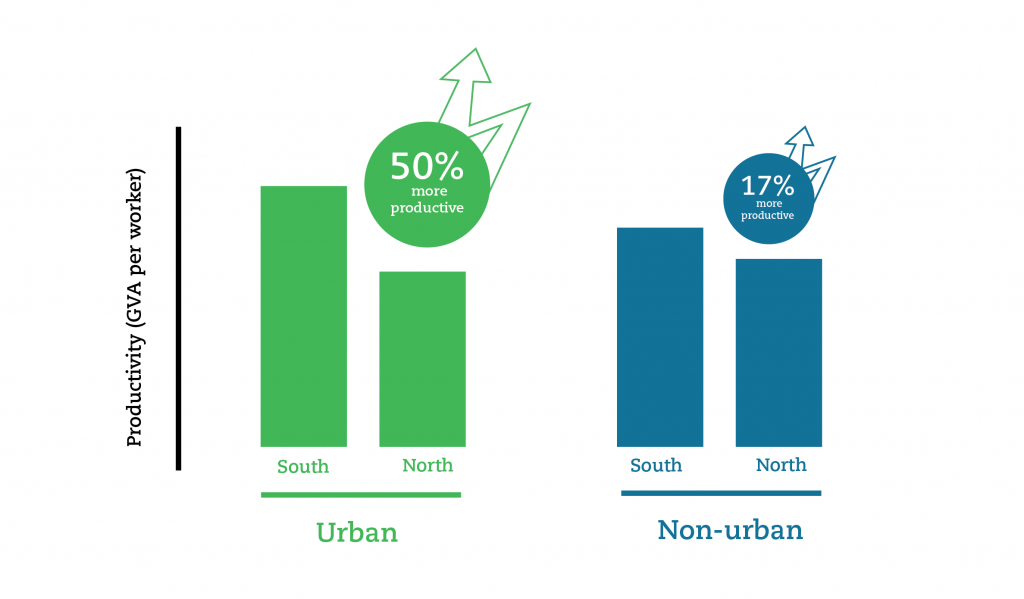 Productivity differences in cities and non-urban areas, 2015. Source: ONS, Regional Value Added. Note: The North is defined as the regions of the North East, North West and Yorkshire and Humber. The South refers to the Greater South East.

Recent research has shown that 5 million adults lack basic literacy or numeracy skills, while the UK ranks 19th out of 24 OECD countries for the number of people with low skills. This limits the benefits that people receive from growth of the economy, as they are unable to take advantage of the high-skilled, high-waged jobs that a successful economy brings.

The issue of poor skills is greatest in places across the UK which have the weakest economies. The chart below plots the share of people with no formal qualifications against the share of pupils gaining five good GCSEs, with the size of the bubble representing productivity. It shows that those places with lower productivity (such as Stoke and Liverpool) tend to do poorly on both school performance and adult skills.

The implication is that a great number of people with poor skills are attempting to find jobs in areas where opportunity is limited. This is at the root of the economic divides we see across the country.

If national politicians want to close these divides, they need to ensure that the education and adult skills systems are more effective in giving people the tools needed to benefit from a growing economy.

3. Build houses to help the squeezed in successful areas

There is no national housing crisis in the UK, but there is a crisis in the Greater South East. At a national level houses are 9.8 times higher than average salaries. This ranges from four times in Burnley to 10.5 in Reading and 16.7 times in Oxford.

As Figure 3 shows, success brings with it its own challenges to our most productive cities, with less affordable housing being one of those. This risks choking off growth in our most successful areas by pricing people out . And this would obviously be bad news for the national economy.

Expensive housing in successful places hits the poor the hardest. This either means that a huge share of their wages goes on housing costs, or they get priced out of accessing the job opportunities in these places completely. The result is widening inequality within these places.

As we’ve written about many times before, these patterns are driven by an undersupply of houses in and around our most successful cities. It is around these places that politicians should be committing to build more homes to ease the squeeze on poorer people living in them, both on brownfield and greenfield sites.

How the next government can do this

These issues have a critical influence on the job opportunities available to people across the country, their ability to access these jobs and the amount of money in their pockets. However, they play out very differently across the UK, and this variation needs to be central in any approach taken to improve prosperity.

The national economy clusters in cities, so to drive growth and improve standards of living for the greatest number of people, the next Government must focus on making the most of the UK’s urban areas. That means taking lessons from our most successful cities to improve the performance of our struggling ones, and putting measures in place to offset the costs of success in those cities that are driving on the national economy.

The next government’s economic policies should therefore have at their heart a place-based plan for spurring growth. That should include addressing the skills inequality that locks people out of the growth of the national economy in struggling places. It also means building houses where they are most needed, allowing our most successful cities to continue to make their significant contribution to the national economy, while allowing people to access the opportunity that these places create.

The next government should also avoid becoming fixated on concerns about relative inequalities between different places. Our most equal cities are also some of our poorest, and they haven’t enjoyed many of the benefits of the growth of the national economy in recent years. In these places, policy needs to prioritise making these places more attractive to business investment, in order to increase the job opportunities available to the people who live there.