The economy of the UK – and the world – is concentrating in big cities and away from many of the towns and cities that grew on the back of a single company or industry. This means that the way jobs are distributed is uneven and spiky (see map below). Should we expect the strong market forces underlying this change to make the political map spikier too?

Big, globally connected cities like London are home to a vertiginous pile of high-knowledge jobs within firms that are part of a highly competitive, complementary and productive business environment. The breadth and height of this pile attracts highly skilled people from across the UK and world who make the pile even higher. The high-knowledge, tradable services these workers create provide the wealth and demand for other goods and services that mean big cities are also attractive places for the low-skilled and migrants– from sandwiches at lunchtime, to cab rides, cleaners and caretakers. Big cities also offer abundant opportunities, where cars aren’t a necessity and culture, public services and community are often free and on your doorstep. These agglomeration effects of big cities drive this attraction to rich and poor alike, and help to explain why our richest cities are also our most unequal. And it’s why many places feel left behind as more of our lives and economy concentrate in our big, evolving and growing cities away from many of the other concentrations of land, labour and capital that drove the industrial revolution. 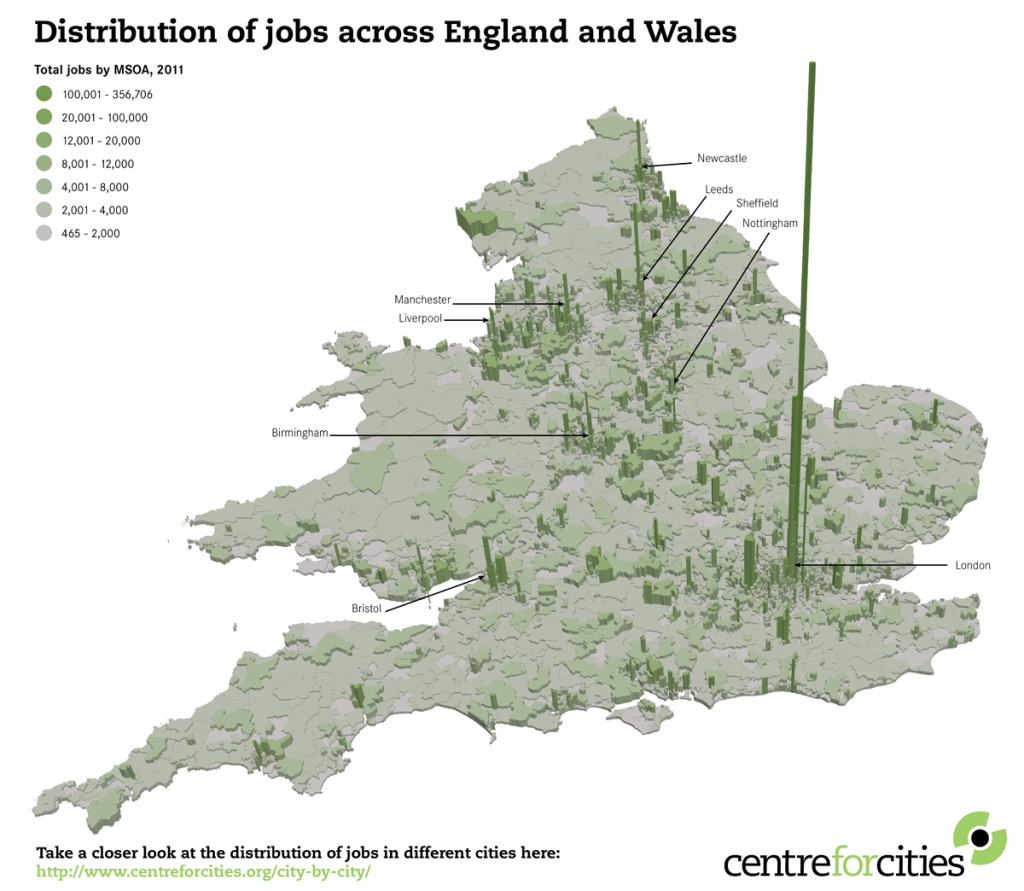 To the consternation of many geographers, planners and politicians this process has been largely unaffected by decades of government attempts to push growth around the country in the pursuit of convergence and national equality.

But one group of people who may not be worried by this is Labour MPs who have been canvassing in major cities. In the 2015 general election in England, the collapse of the third party and first-past-the-post voting saw Labour and the Conservatives increase vote share and seats, and control 525 of 533 or 98.5% of English seats with 72.6% of the votes. Labour picked up big city Liberal Democrat seats while Conservatives picked off the rest, including smaller urban areas mainly in the South.

Recent analysis of the polls and feedback from the doorstep indicate that this pattern is set to deepen. They show the Labour Party’s national vote share rising above its 2015 levels even while candidates and campaigners in parts of the North and Midlands return from the doorstep with dire reports of impending defeat. It looks like politics is also about to get a lot spikier for those Labour MPs outside of the bigger and more highly educated metropolitan areas, and those in the suburbs of these cities which we can see clearly in Outer London and around the core of Birmingham

As Daniel Finkelstein writes, Labour’s message is more immediately appealing to middle class city dwellers than its traditional vote in midlands and northern towns and smaller cities. These voters in areas that voted heavily to leave the EU are now being targeted assiduously by the Conservatives. It is no coincidence that they are likely to live in areas without access to the knowledge economy, and where globalisation and immigration are are not viewed as the symbols of progress.

The way individuals sort themselves in and out of different cities that drives economic spikiness seems to also drive and feed off the political and social sorting that comes with it. And it probably shouldn’t be surprising that this sorting – most commonly of people with degrees to cities with the biggest job opportunities – should bring political as well as economic divergence.

More skilled people moving to a city changes its workforce and improves local economic performance and wages, while having the opposite effect in the place they left behind. If we think education, income and the acceptance of living in a big city tell us anything about a person’s political views, then we should expect these compositional changes to affect election results too.

How does this sorting work? As mentioned, job opportunities are the major pull factor that sorts the UK by skill level. This is most clearly seen among university leavers, with the sorting being strongest among those leaving the best universities with the best degrees, and weakening with those with lower level degrees. The impact high skills have on city economies is evidenced by the well-intentioned but wrong-headed attempts of many university cities with big student populations but weak economies to retain graduates with inducements and incentives to stay.

The lifestyle demanded by a big city also plays a role in sorting; the daily grind (or joy) of living cheek by jowl, anonymous among the crowd, undivided by private cars, front doors or green spaces. This can be expected to put off many of those otherwise tempted by the jobs and amenities, while being positively embraced by some, and endured of the rest.

The social and cultural composition of a city is also affected by sorting. Young people from smaller towns or the countryside may wish to be part of the throng in the city, hooked up to arrays of cultural and sub cultural options within a deep pool of people like them. And more tolerant attitudes in a big city might be attractive to anyone feeling out of place in the countryside or urban hinterlands.

Plenty of people raised in cities or who begin their careers in them weigh the costs more heavily than the benefits and get out as soon as possible, never to look back from smaller towns or the countryside. Whether they are priced out or pissed off, their departure somewhere cheaper or cheerier changes the composition of the city and its economy and electorate.

And once in a city, this natural rubbing up against different people, groups and cultures might begin to have an impact on political views – self-reliance, the role of the state, immigration. In the US, Cass Sunstein argues that the polarisation of political views has been deepened by the greater sorting of people into blue states and red states, blue cities and red country.

Sorting takes place within cities too. It is no act of God that sees coffee shops spring out of the ground in some parts of town to be filled by buggies, while others are preferred by different cultural economic or ethnic groups. People sort to areas that offer the amenities and jobs they want, and by doing so increase demand for these amenities, the supply of which will grow in response. The constant pursuit of personal preferences produces the emergent phenomenon of a more sorted city, creating areas of heterogeneous homogeneity that over time change how constituencies vote at Westminster or local elections. This could happen even if not a single person voting changes the way they vote, just where they vote.

So if Labour piles up votes in the big cities while Theresa May wins a majority, should we be concerned for our cities and the national economy?

The Conservatives already hold seats in fast-growing cities in the South. Yet if they don’t win in big, mainly Northern, cities, and still maintain their grip on rural seats, then there is a risk of a Tory government ignoring the big cities that are the engines of our economy. This could seek to limit or spread London’s growth and reduce the investment in homes, transport and infrastructure that the city and South East needs to accommodate that growth, then yes, it will be worry. London is already responsible for 30p in every £1 the UK raises in economy taxes. Recent policies and those announced in each party’s manifesto will only increase the country’s financial dependency on the capital even while its international position deteriorates.

If it fails to win today and the Labour party membership and leadership maintain its current course, aiming for and achieving high levels of support among the young, ethnic minorities, public sector workers and metropolitan, socially liberal voters, then it had better hope that more Londons and Manchesters and Bristols arrive soon. Its best policy might be to pursue massive expansion of housebuilding around those cities to make the jump from other parts of the country to these cities easier (that and a boundary review based on population rather than the electoral register).

And for the Tories, if the precipitous drop in home ownership and hope of ever getting on the property ladder among the young has anything to do with the strong support for Labour among this cohort, then maybe massive expansion of housebuilding of their own in these cities would help to reenergise Margaret Thatcher’s homeowning (and Conservative voting) democracy.

Who knows? The country is currently deciding and we’ll find out tonight whether political divergence marches along with economic divergence, and metropolitan and suburban/rural divides grow. How the parties respond will be a central issue of the next parliament and beyond.