Fundamental shifts have taken place in the global economy over the last 30 years. Innovation and technology have created thousands of new jobs and businesses, from developers and programmers in tech startups to designers and global branding companies. As these types of jobs and companies, which are highly skilled and knowledge-intensive, continue to drive growth, the geography of the UK economy and its small and medium sized businesses (SMEs) base will continue to change.

This year’s Small Business Outlook looks at this shift towards ‘new work’ and what it means for SMEs across the UK’s 64 cities. It explores where ‘new work SMEs’ are locating and why, and examines the wider impacts these firms have on their city economies. Crucially, it aims to build understanding of why SMEs in the professional services, creative and digital industries (‘new work’ sectors) locate in particular places, and what this means for cities seeking to transform themselves into hubs for innovative, thriving small businesses.

The shift towards ‘new work’

Over the past few decades, there has been a notable shift in the UK economy towards the most innovative, knowledge-intensive industries.Knowledge-intensive services1 now make up 34 per cent of UK output and 29 per cent of total employment.2 Within these sectors, growth has been particularly significant among the professional services, creative and digital sectors. Between 2009 and 2013, employment in these ‘new work’ industries increased at over four times the economy as a whole. Over the last four years employment in creative firms grew by 4.9 per cent, in digital firms by 3.2 per cent and in professional services firms by 12 per cent compared with overall growth of 2 per cent.

Between 2009 and 2013, output from the ‘new work’ sectors increased by one and a half times the rate of the economy as a whole.3 Output from the digital sector increased more than seven-fold (657 per cent) between 1990 and 2013 and by 286 per cent in the professional services and 196 per cent in the creative sector. Growth across most manufacturing sectors – with the exception of pharmaceutical and aerospace – has been more subdued, increasing by over 39 per cent between 1990 and 2013.4

Using broader industry definitions, ‘new work’ industries make up over half (51 per cent) of the country’s exported services by value.5

The shift in the UK economy towards ‘new work’ is set to continue. While it is notoriously difficult to precisely forecast where future growth will come from, longer term economic trends suggest that knowledge-intensive services are likely to see the strongest output and employment growth in the medium to longer term (Figure 1).6 The shift towards high skill, white collar jobs, including managers and professionals, is also predicted to be ongoing.

SMEs are also an increasingly important driver of output growth. Between 2009 and 2013, Gross Value Added (GVA) grew at twice the rate of large businesses (25 per cent compared to 12 per cent).7 The latest data indicates that SMEs are now at least as productive as large businesses.8

The shifting profile of SMEs

The shift towards ‘new work’ in the UK economy is reflected in the changing profile of SMEs. Among the UK SME base, there has been a shift away from the primary industries, manufacturing, construction and lower value services, towards knowledge-intensive services, including creative industries, professional services and digital. More than a third (34 per cent) of SMEs now operate in ‘new work’ industries; an increase from 31 per cent in 2008 (Figure 2). 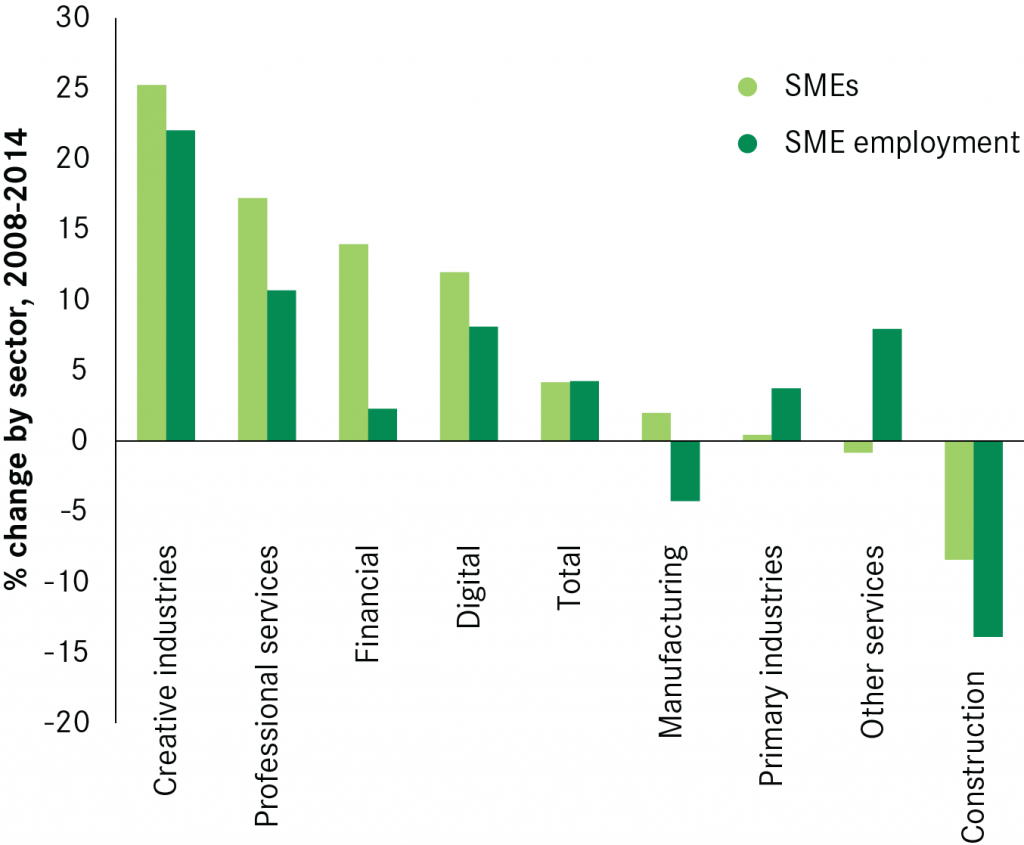 ‘New work’ SMEs in the creative industries, professional services and digital sectors saw the largest increases in employment between 2008 and 2011. Changes in SME employment follow a slightly different pattern across other industries, however:

Policy and the economic importance of ‘new work’ sectors

The Government and cities recognise the economic importance of these ‘new work’ sectors. The 2010-2015 Coalition Government identified 11 key sectors as part of its Industrial Strategy ‘that will benefit from long-term strategic partnership and where this can make the most difference to the economy’. Among them, ‘professional services’ and ‘digital’ are highlighted as two sectors that have exhibited strong economic growth and where there is the potential to exploit growing domestic and global demand. The Department for Business, Innovation and Skills (BIS) continues to monitor the performance of the 11 sectors as part of its ‘Growth Dashboard’.

More recently, the Government has re-prioritised policies on the basis of their potential to boost productivity growth. Policies are set out within a framework built around two pillars: 1) encouraging long-term investment and 2) promoting a dynamic economy that encourages innovation and efficient resource allocation.

At the local level, nearly every city and Local Enterprise Partnership (LEP) economic strategy highlights the ‘new work’ industries – or at least one sub sector – as being a source of comparative advantage within their local economy. For example, our previous research has found that 70 per cent of English cities identified the creative industries as one of their priority sectors.9 Put simply, not every city can have a world leading cluster in the same few industries.

Creative industries includes the publishing, production and broadcasting of literature and media services such as design, PR and advertising agencies, library and museum activities, artistic education and creation.

Digital includes software and computer consultancy, programming and the reproduction of sound, video and information technology media. Certain news media activities and the manufacturing and wholesale of computer related equipment.

Professional services include legal, accounting, administrative and management consultancy work, as well as scientific research and development and other professional activities.

The significance of place

While the focus on ‘new work’ sectors is welcome, there are two significant barriers to making the most of the growth in ‘new work’ SMEs. First, national government policy often underplays the significance of place as a factor in driving growth in these industries. Second, cities can overplay the existing economic importance of certain sectors, including ‘new work’ sectors, within their local economies.

Cities are likely to play an ever more important role as the economy continues to shift towards ‘new work’. Businesses in these sectors tend to concentrate in cities: in 2014, 58 per cent of ‘new work’ SMEs were located in one of the 64 largest urban areas in the UK. But there is also huge variation between cities, with higher concentrations of ‘new work’ SMEs in some compared to others.

This report aims to build greater understanding of the geography of ‘new work’, the connections between SMEs operating in these industries and the wider economy of cities, and what this means for policy by exploring the conditions that these industries need to thrive. The focus on particular sectors is not intended to encourage cities to seek to replicate clusters or to ‘pick winners’. Instead the aim is to further the evidence base in order to support policymakers to take informed decisions to create, protect and foster conditions for growth in different cities.

Box 2: The use of Primary Urban Areas

The analysis undertaken in Small Business Outlook compares cities’ Primary Urban Areas (PUAs) – a measure of the built-up areas of a city, rather than individual local authority districts.
A PUA is the city-level definition used in the Department for Communities and Local Government’s State of the Cities Report. It is useful as a consistent measure to compare cities across the country and we have used it since the first edition of Cities Outlook in 2008.

It is worth noting that, as is the case with almost every definition of geographic units, PUAs are imperfect and fit some areas better than others. Hull and Cambridge PUAs, for example, are slightly under-bounded. Some cities with substantial populations, such as Colchester, never made it into the PUA definition. And Manchester PUA is smaller than Greater Manchester, which also includes Rochdale, Bolton and Wigan PUAs.

PUA data only exists for English cities; for Welsh and Scottish cities we have used local authority data with the exception of tightly-bounded Glasgow, where we have defined the city as an aggregate of five Local Authorities: Glasgow City, West Dunbartonshire, East Dunbartonshire, East Renfrewshire and Renfrewshire. Belfast is defined as the aggregate of Belfast City, Carrickfergus, Castlereagh, Lisburn, Newtownabbey and North Down.

These figures are only estimations, however, as the relevant surveys record self-employment in different ways. The Labour Force Survey (LFS) and Censuses record all self-employment and do not delineate between registered and non-registered businesses, while the Inter-Departmental Business Register (IDBR) (the basis for the Business Structure Database) does not capture any unregistered businesses with no employees.

‘New work’ SMEs are more likely to be operating as sole traders: 16 per cent of workers in professional services and 13 per cent in digital are self-employed or freelance (with no employees) compared to a 10 per cent average.11 For the reasons outlined above, however, it is not possible to identify which of these will be registered – and included in the IDBR. As a result of the incompatibility of different datasets, unregistered sole traders are excluded from the analysis.