03Cities have the potential to increase bus journeys dramatically

In 1999, there were 1.3 billion bus journeys in London. The network’s buses travelled 354 million miles. Since 2000, all Mayors of London have used their control of the capital’s bus network and the revenues it raises to entrench the most significant pro-bus policies in the country. More funding, more bus lanes and a congestion charge have supported more frequent and reliable buses, a 24-hour service, lower and more concessionary fares, cleaner vehicles and a new payment system.

As Figure 2 shows, by 2009, journeys had increased to 2.3 billion a year, and the network had grown 483 million bus miles. And by 2012, more than half of bus journeys in England were made in London.

Every metro mayor can now do for buses in their city what London’s mayors have done for buses in the capital. In 2017/18, 782 million bus journeys were made in the seven mayoral combined authorities with franchising powers.18 Including West Yorkshire and the North East, this figure is above 1 billion journeys a year (most of these are captured in ‘Metropolitan areas’ in Figure 2), down from over 2 billion in 1985. 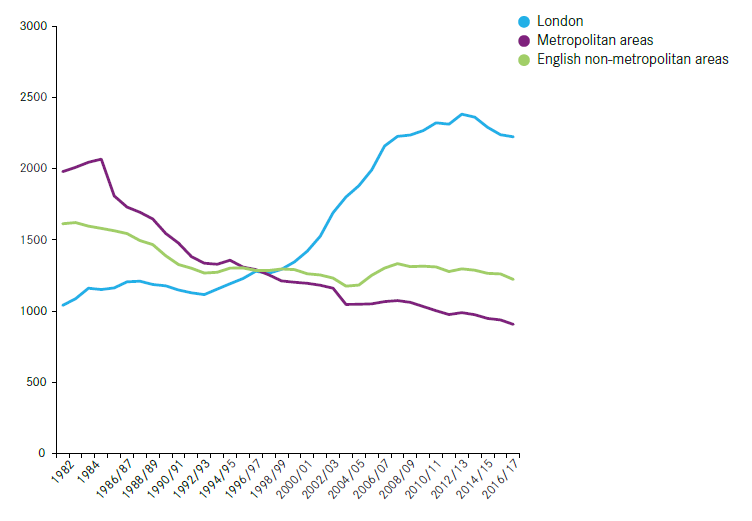 London shows that reversing this trend is achievable and cities have announced their ambitions to do this. Leeds is aiming to double bus use within 10 years.19 Greater Manchester aims to increase walking, cycling and public transport journeys by 1 million per day by 2040.20

If the metro mayors are as successful as the Mayor of London, this would mean doubling bus ridership in major cities over the next decade to over 2 billion journeys a year. The prize in terms of the benefits this could bring to jobs, wages, air quality, the environment and communities is huge.

This growth will require a high-quality bus system in every city. Cities are in broad agreement in what this should look like for passengers, mayors and operators:21

Achieving the system will require addressing a series of challenges that have hampered the bus systems in places outside London for the last 34 years. The next section looks at this in more detail.