01A new era for national and local ambitions for buses

Bus use has been in decline in the UK since the 1950s as car ownership has grown and decades of policy at local and national level accommodated higher levels of car use, changing the physical fabric of the country and cities in the process (see Figure 1). But the higher levels of car use and declining bus use are taking their toll on growth, the environment, public health and communities in cities. 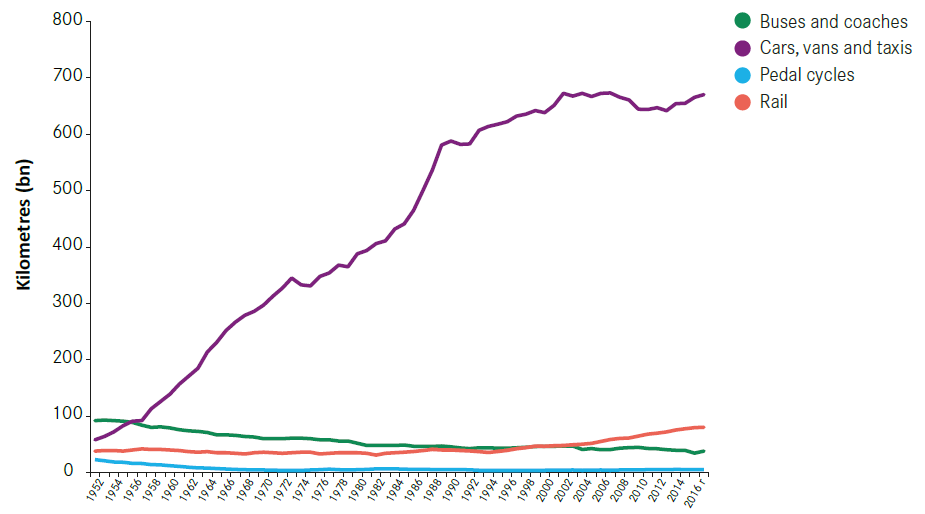 The decline of bus passenger numbers outside London is now a recurring theme of set-piece political speeches, and reversing it is a key policy to support more productive and inclusive cities in the UK. The Prime Minister called the connectivity that good bus services provide as a ‘basic ingredient of success’ for cities, but one lacking in too many places.2

Boris Johnson pointed the finger of blame for a 34 per cent decline in bus ridership outside of London and 97 per cent growth in the capital at the lack of franchising powers to specify the routes, fares and quality of bus services that London has uniquely enjoyed for over three decades.2 He made clear that he wanted every part of the country to be able to have London-style bus powers.

In 2017, through the Bus Services Act (BSA) the Government gave newly-created metro mayors in major city regions the power to franchise bus services as well as a new model for partnership with bus operators. Mayors can now fully integrate the bus network into wider economic, social and spatial plans in the same way that the Mayor of London has since the creation of the office. The BSA, in particular the powers to franchise services, was supported by all major parties — the Labour Party plans to encourage local leaders to franchise bus services, rewarding any that do so by funding for free bus travel for under-25s.4

More recently, the announcement of the National Bus Strategy, and up to £220m for improvements to road network, ticketing, and new vehicles bolsters the argument that the Government is getting serious in its ambitions for increasing bus use.5

This report sets out: