03To be successful, the Northern Powerhouse initiative must focus primarily on its cities and city regions

The economy of the North of England struggles principally because its cities and wider city regions punch below their weight. This is most clearly seen not by comparing the North to the Randstad or the Rhine-Ruhr, but by comparing it to the Greater South East of England.

To improve their performance, the Northern Powerhouse initiative should focus on maximising the effect of agglomeration in its city regions. This means increasing the benefits – namely knowledge spillovers and the size of the pool of skilled workers – and reducing the negatives, such as congestion and the costs of commercial space.

The idea of the Northern Powerhouse was first conceived to provide a counterbalance to London in the UK economy. If policymakers want to improve the performance of northern cities, then there are many relevant lessons that can be learned from the place they are trying to counterbalance.

The UK economy is likely to continue to specialise in knowledge-based economic activity. This type of activity benefits from proximity and the knowledge spillovers this creates to a much greater extent than more routinised types of activities.26 This explains why high-skilled, knowledge-based services sectors have increasingly located in large city centres in recent years, while lower skilled jobs tend to locate in out-of-town locations.27

As shown above, over 17 per cent of the North’s KIBS jobs were located in its largest city centres in 2015, despite them accounting for just 0.07 per cent of land. But only Manchester city centre saw its growth of KIBS jobs between 1998 and 2015 outstrip growth in KIBS jobs in the North as a whole.

This suggests two things. Firstly, because so much of it occurred outside of city centres, the nature of KIBS jobs growth in the North is likely to have been lower skilled (for example, back office functions for financial services). Secondly, the North’s city centres are struggling to attract KIBS businesses, suggesting they need to improve access to knowledge. Given the preference for many of these businesses for a city-centre location, the result is that the North as a whole struggles to attract more knowledge-based services jobs, which is reflected in its industrial structure (see Figure 11).

Figure 11: Industrial structure of the North and Greater South East of England, 2014

How exactly knowledge spillovers are facilitated is unclear. What we do know is that they increase with density.28 London has the highest density of private sector jobs in its centre of any British city, despite the cost of office space. This suggests that the knowledge spillovers that result from this concentration more than offset the high cost of commercial space there.

To encourage this density in the Northern Powerhouse, decisions will need to be made about how land is used both across city regions, and within city centres, with a focus on encouraging the expansion of attractive office space and associated amenities within city centres and encouraging greater density where appropriate. The focus of policies such as enterprise zones, for example, could switch to building office space in city centres, underpinned by wider, long-term spatial plans for city regions (as it is in London through the London Plan) that make strategic choices about how land is used.

In any long-term planning undertaken, anticipating the costs of success will also be important. Increasing demand to live and work in particular places pushes up the cost of offices and housing and increases congestion. This will mean that the supply of office space and housing will need to match increases in demand (the latter has not sufficiently happened in London), while the introduction of congestion charging, as has been in place in the capital and cities such as Stockholm, Milan and Singapore for some time, will need to be considered in the future as the performance of the North’s cities improves.

Expanding the pool of workers

One of the key drivers of the location and investment decisions of businesses will be whether they can recruit the right workers. And so this makes policies that increase their availability crucial in making northern cities more attractive places to invest.

Expanding the pool of skilled workers will require two different policy interventions. The first is to increase the skills of residents in and around cities and city regions. And the second will be to develop public transport systems that better connect these people to jobs, particularly in city centres.

The North is hamstrung by its weak skills profile. York, Warrington and Leeds are the only three cities to appear in the top 20 for share of residents with a degree. And almost half of the 30 cities with the highest shares of residents with no formal qualifications are in the North (see Figure 12).

Cities in the Greater South East in general, and London in particular, have much higher shares of highly qualified residents. Close to half of all the capital’s residents hold a degree. And this is combined with scale – over 2 million degree holders lived within 18 km of central London in 2011, giving London-based businesses greater choice than those located in cities further north.29

The strong skills profile that London businesses benefit from has little to do with any London-specific policy, and is in part down to the migration of graduates from further north. Be that as it may, the weaker skills profiles of northern cities puts them at a disadvantage when attempting to attract high-skill businesses, and any policy attempting to improve the performance of northern cities will need to address this with the highest priority. Northern cities that have managed to secure a devolution deal will be given greater control over adult skills budgets. Tailoring the use of these budgets to address the specific skills needs that each city faces should be a main focus of mayors as they come into office.

The coverage, performance and management of public transport in London is far superior to that seen in northern cities. This allowed the system, mostly managed by Transport for London (TfL), to carry over 2.25 million commuters to work in London every day in 2011.30

The TfL model has five key advantages over the transport models currently available elsewhere in Britain:31

The Buses Bill, which is currently making its way through Parliament, will give other city regions outside of London with a mayor similar powers over the bus network if they choose to use them. Combining this power with the creation of TfL-style bodies will be a significant step in improving the provision and management of public transport in their areas.

There is a case for improving transport between cities in the North. As previous research by Centre for Cities has shown,32 the speed of the Manchester to Leeds line, especially relative to speeds of lines linking London to surrounding cities, suggests that an upgrade is needed. But the allure of a grand projet should not divert attention from the need to improve the places it is designed to link, particularly when it comes to transport within the city regions and skills across the North.

Improving city-to-city links is likely to be important from the view of connecting businesses – the Eddington Transport Review suggested that reducing travel times could increase productivity between 0.4 to 1.1 per cent33 – but any upgrade is unlikely to have much impact on commuting, as has been claimed to date.34 Longer commutes impose a cost on workers, both in terms of time and money. This is traded off against the size of a house, its cost and the value attached to its surroundings. Box 3 shows how this trade-off is much greater for London, helping to explain why average commuting distances to the capital are so much longer.

Box 3: The trade-off of housing costs and commuting time in and around London and Manchester

London has the furthest reach of any English or Welsh city – on average, London workers who live outside the capital commute 62 km to their job. For Manchester it’s 38km, while in Leeds it’s 32 km.35

There are three main reasons for this. Firstly, on the supply side, London has a much more extensive transport network than Manchester. There are many more train routes radiating out of the capital than out of Manchester city centre.32

Secondly, on the demand side, differences in wages are much greater between London and its hinterland than Manchester and its surroundings. On average, wages in Manchester are 8 per cent higher than its surrounding area. In London this differential is 28 per cent. And it is even greater when looking at Inner London – average wages are 51 per cent higher in Inner London than in the capital’s hinterland. This clearly increases the incentive for workers to travel longer distances into London.

Thirdly, also on the demand side, is the large difference in the cost of housing between the respective cities and their hinterlands. Figure 13 shows that the gradient of the cost housing per square foot is both lower overall and drops off much more quickly in Manchester than it does in London. The result is that the trade-off between commuting time and housing costs is much less acute in Manchester, meaning people aren’t forced to live so far away from the centre of the city, and so commuting distances are shorter.

One of the benefits that has been raised of living in a larger city like London is the ease at which professional couples can both find a job. It has been argued that an improved rail line between Leeds and Manchester could bring similar benefits, with the combined scale of the two cities increasing the likelihood that both people could find a job.

There is logic to this argument. But living between the two cities and commuting by train to either is already an option. The train from Huddersfield takes 30 minutes to go to both Manchester and to Leeds. Of the working residents living in the west of Kirklees local authority (the east is served by Dewsbury station, which is much closer to Leeds), around 1,500 commuted into Leeds by train, and 400 went to Manchester in 2011. This would mean that a maximum of 400 couples commuted in opposite directions by train, and the reality is that this number is likely to have been much lower.

Median house prices per square foot in and around London and Manchester, 2015 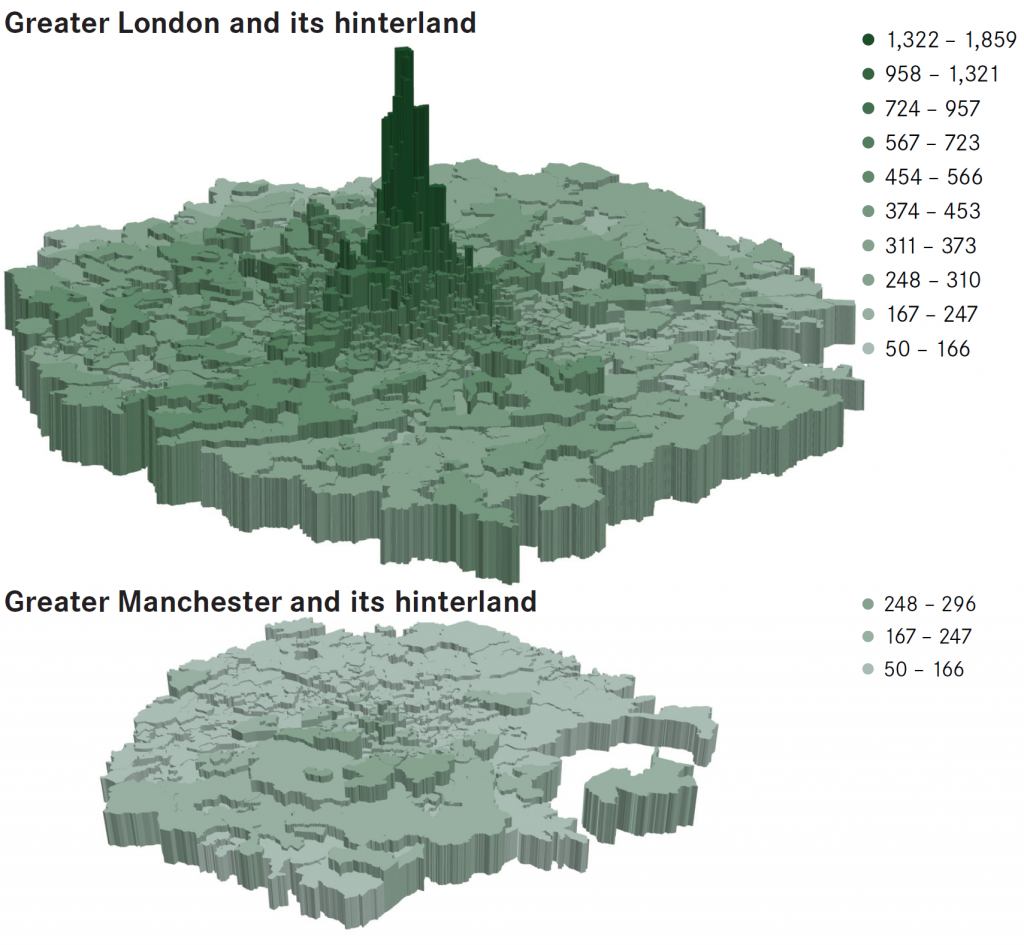 Our research shows that the North is comprised of many economies, rather than one single economy. Decisions about economic policy should be taken at the lowest level appropriate for those decisions to be efficient and well informed. This means that skills, strategic transport and spatial planning should be taken at the city-region level, and should be the responsibility of the forthcoming metro mayors. It also means that the success of the devolution deals that Government has already struck will be crucial to the success of the Northern Powerhouse initiative, as will securing separate deals in Leeds and Hull, which don’t currently have one.

Because intracity transport by definition operates across city regions, decisions about what this should look like quite rightly fall into the remit of the newly created Transport for the North. But the pan-Northern institutions should focus resources on matters where there are significant benefits from working together that cannot be achieved either alone, or through partnerships between mayors for specific purposes. For the North as a whole to be successful, it is important to ensure a strong focus on making the most of the component city regions, and working across boundaries with limited resources only where that adds significant value.