The national economy is not spread evenly across the country – it is concentrated in cities. In Britain, cities account for 8.5 per cent of land, but 62 per cent of output.

Jobs cluster in specific places because of the benefits that density and proximity bring. These benefits increase the productivity of the jobs concerned – it is for this reason that British cities1 are 14 per cent more productive than non-city areas. This phenomenon is called agglomeration.

The benefits of agglomeration for businesses can be split into three main categories:2

Figure 1: The benefits of agglomeration 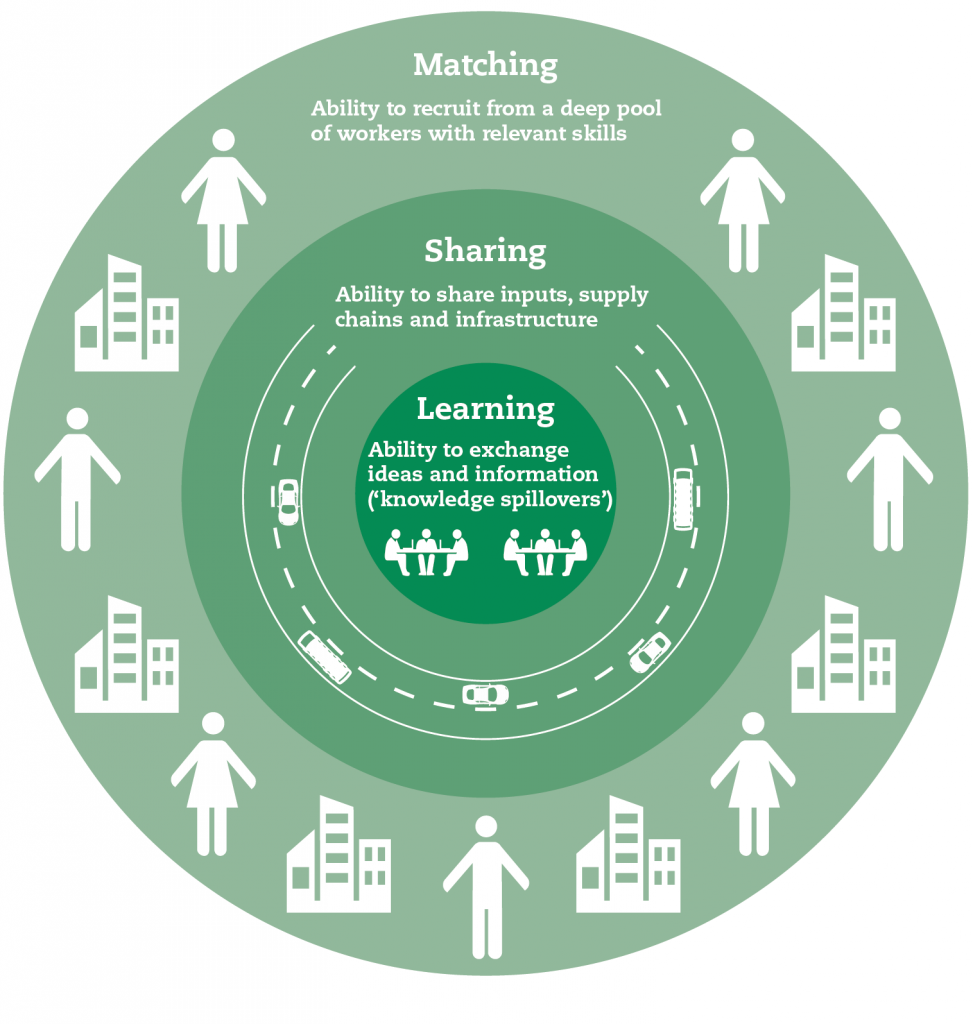 And these benefits increase with scale – the more businesses there are to interact with, and the greater the choice of workers, the bigger the uplift on productivity that agglomeration has. While this principally has a positive impact on more ‘knowledge-based’ businesses,6 such as media and software development, growth in these industries creates jobs in other areas of the economy too, such as the retail and leisure industries.7

It is the principle of benefiting from scale that has driven the creation of the ‘Northern Powerhouse’ policy agenda. But even in the short time since the Chancellor announced the Northern Powerhouse idea, the focus of the initiative has been fluid. What started as an idea to link together the belt of cities from Liverpool to Hull has since broadened out to attempting to harness the scale of the whole of Northern England. The idea is that better connecting the North will increase its scale, creating one single economy across the North of England to rival other global cities. Policymakers have pointed to the Randstad in the Netherlands and the Rhine-Ruhr area of Germany as examples of where this already occurs (see Box 1).

Box 1: The Randstad and Rhine-Ruhr as inspiration

A world class transport system must better link up the individual cities and towns in the North, to allow them to function as a single economy and be stronger than the sum of their parts.

We can see how an efficient and effective transport system in the Northern European urban areas of the Randstad and the Rhine-Ruhr unite smaller cities into one economic area and increase overall performance.

The Northern Powerhouse: One Agenda, One Economy, One North, March 2015

Improved connectivity in the North will support growth in the North’s Key Growth sectors and their high value jobs by bringing towns and cities across the North closer together – creating the agglomeration benefits of a much larger, single economy.

Definitions of the Northern Powerhouse, Randstad and Rhine-Ruhr

In this report, the Northern Powerhouse, Randstad and Rhine-Ruhr areas are broken into three geographies – the region as a whole, and below this regional level, city regions and cities. They are defined as the following: 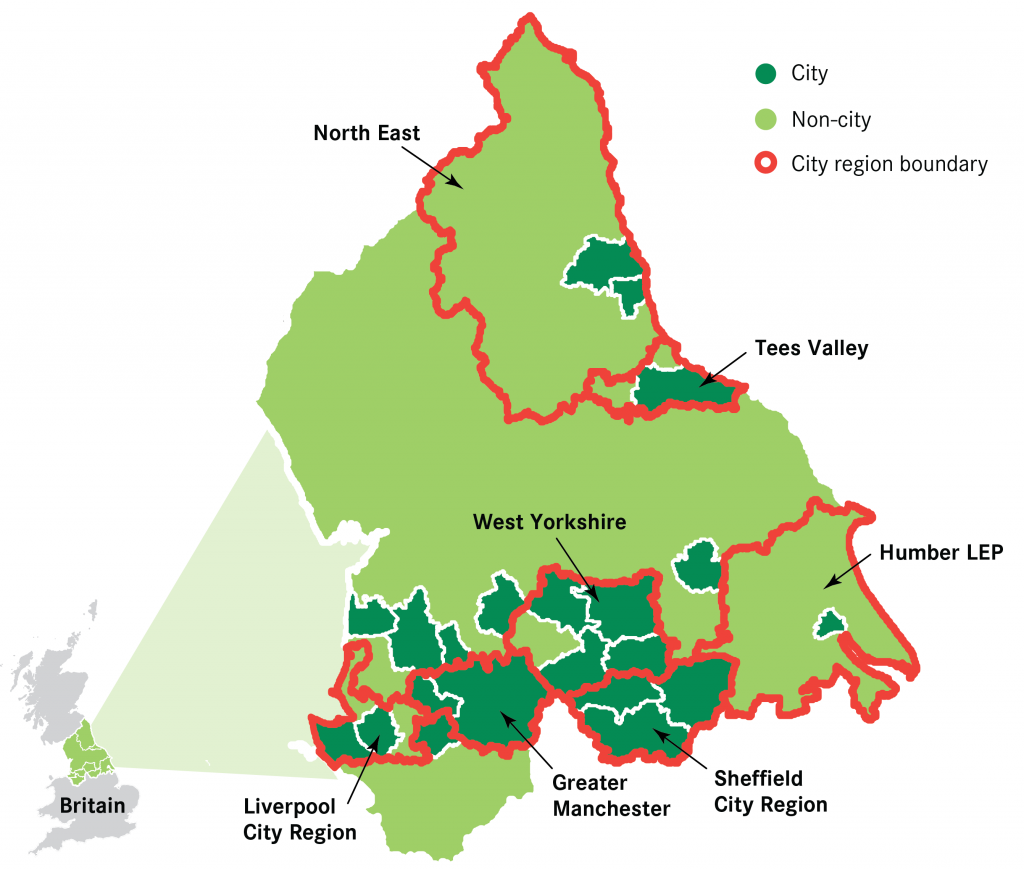 Total region: The regions of the North East, North West and Yorkshire and Humber, in line with the definition used by Transport for the North in last year’s initial report on a Northern Transport Strategy.8

Cities: Primary Urban Areas, as used as standard in Centre for Cities’ work. 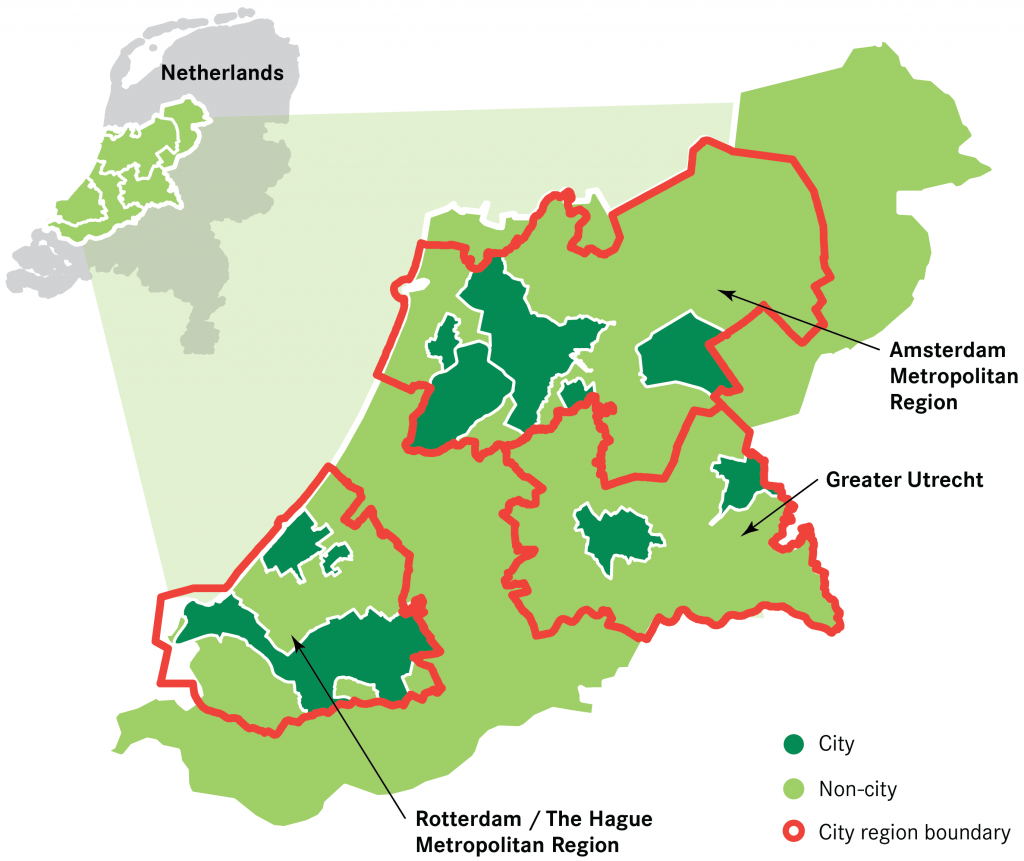 Total region: The NUTS3 areas of Utrecht, Flevoland, IJmond, Haarlem Agglomeration, Zaanstreek, Groot-Amsterdam, Het Gooi en Vechtstreek, The Hague Agglomeration, Delft en Westland, Leiden en Bollenstreek Agglomeration, Oost-Zuid-Holland, Groot-Rijnmond and Zuidoost-Zuid-Holland. This definition matches the one used in ESPON analysis,9 but also includes the two NUTS3 areas that cover the ‘green heart’ of the Randstad in line with other research on the area.10

City regions: The city regions are defined according to the definitions for ‘Metropolitan Region’ in the Netherlands, except for Utrecht, where the NUTS3 area is used. For the purposes of this paper this is named Greater Utrecht.

Cities: Eurostat’s Urban Audit, with a night-time population threshold of 125,000 used to make them comparable to the Primary Urban Area definition used for UK cities. 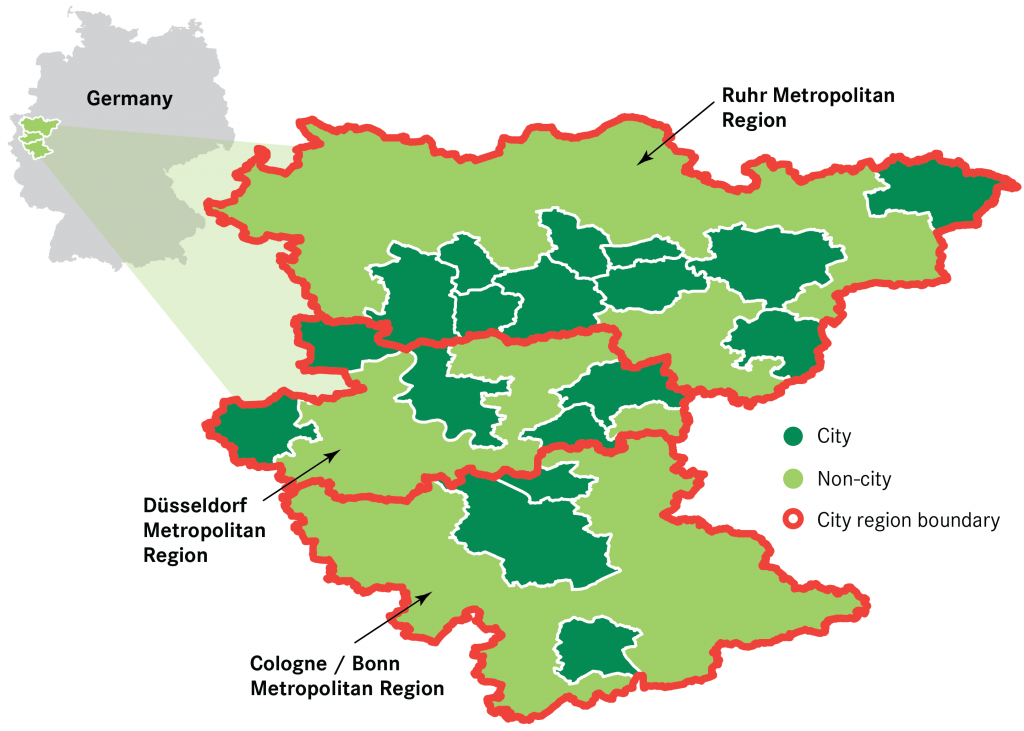 Cities: Eurostat’s Urban Audit, with a night-time population threshold of 125,000 used to make them comparable to the Primary Urban Area definition used for UK cities.

Figure 2: Size of the Northern Powerhouse, Randstad and Rhine-Ruhr