Allowing our cities to expand would help create the growth and jobs the country desperately needs.  However despite only covering just nine percent of the UK’s landmass and Nick Boles best intentions to increase this number, opposition to expanding our cities is still strong.

So, if we can’t physically grow our cities to support growth, our next best option is to better connect them. Fast and efficient transport systems reduce costs for firms and workers – The Department for Transport has shown that eliminating existing congestion on the road network could add £7-8 billion in GDP each year.

This is where Network Rail’s Business Plan for Control Period Five comes in. If it’s approved it could benefit cities in two key ways.

First, rail improvements will increase access for more people to the 72 percent of Great Britain’s knowledge intensive jobs which are housed in cities. Because we know that highly skilled people tend to travel further for work, rail improvements should, in theory, make it easier for them to access these jobs. This is particularly important as the UK economy becomes increasingly orientated towards knowledge-based service sectors.

Second, increases in rail capacity are needed in some of our largest cities. In eleven of the UK’s major cities five percent of passengers (or 18,000 people) travelled in trains which were over capacity during the morning peak hour. As Figure 1 shows, London is the city where the rail network is under most strain. During the morning peak hour 16,000 people travelled on trains than there was capacity for. Birmingham, Sheffield and Leeds also have congestion issues. 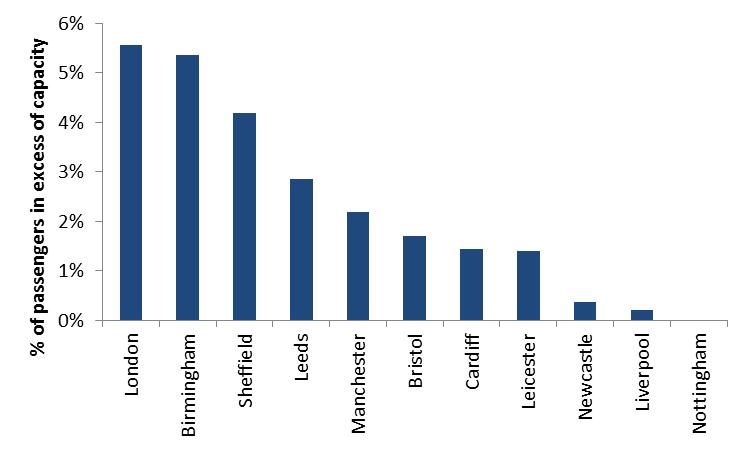 Given this, promises by Network Rail to, for example, electrify the Great Western Main Line from London to Bristol, deliver further improvements to the Northern Hub benefiting Liverpool, Manchester and Leeds as well as continuing with Crossrail and Thameslink in London are welcome. If realised, their plans will increase peak seats in large regional cities and central London by 32 and 20 percent respectively.

But, increasing capacity whilst constraining prices – which there have been considerable calls for – could actually worsen rail congestion. Similar to Jevons’ arguments in 1865, increasing the number of seats on our trains and / or reducing the cost of travel is as likely to cause congestion to rise as it is to reduce it.

This raises important issues around managing the interaction of increasing capacity and managing demand.  Reflections on these issues will have to wait – I’ve got a train to squeeze on to.