Apprenticeships work. As revealed by research from our sister organisation, the What Works Centre for Local Economic Growth, apprenticeships can have a positive impact on skills level, wages and employment opportunities for individuals. Yet, one of the key challenges around the take up of apprenticeships is the lack of awareness of them among individuals and employers.

In the spirit of this year’s National Apprenticeship Week — aimed at showcasing the diverse range of opportunities that apprenticeships offer — this blog answers five questions around how apprenticeships vary among the largest cities and towns in England and what places are doing about it.

Where are apprenticeships more popular?

With 26 apprentices for every 1,000 working-age population, Exeter is the city that provided the largest number of apprenticeships in the last full academic year. Apprenticeships were also particularly popular in Burnley, Preston and Derby, while Southend, Bristol and Luton were the three cities with the fewest apprenticeships starts. 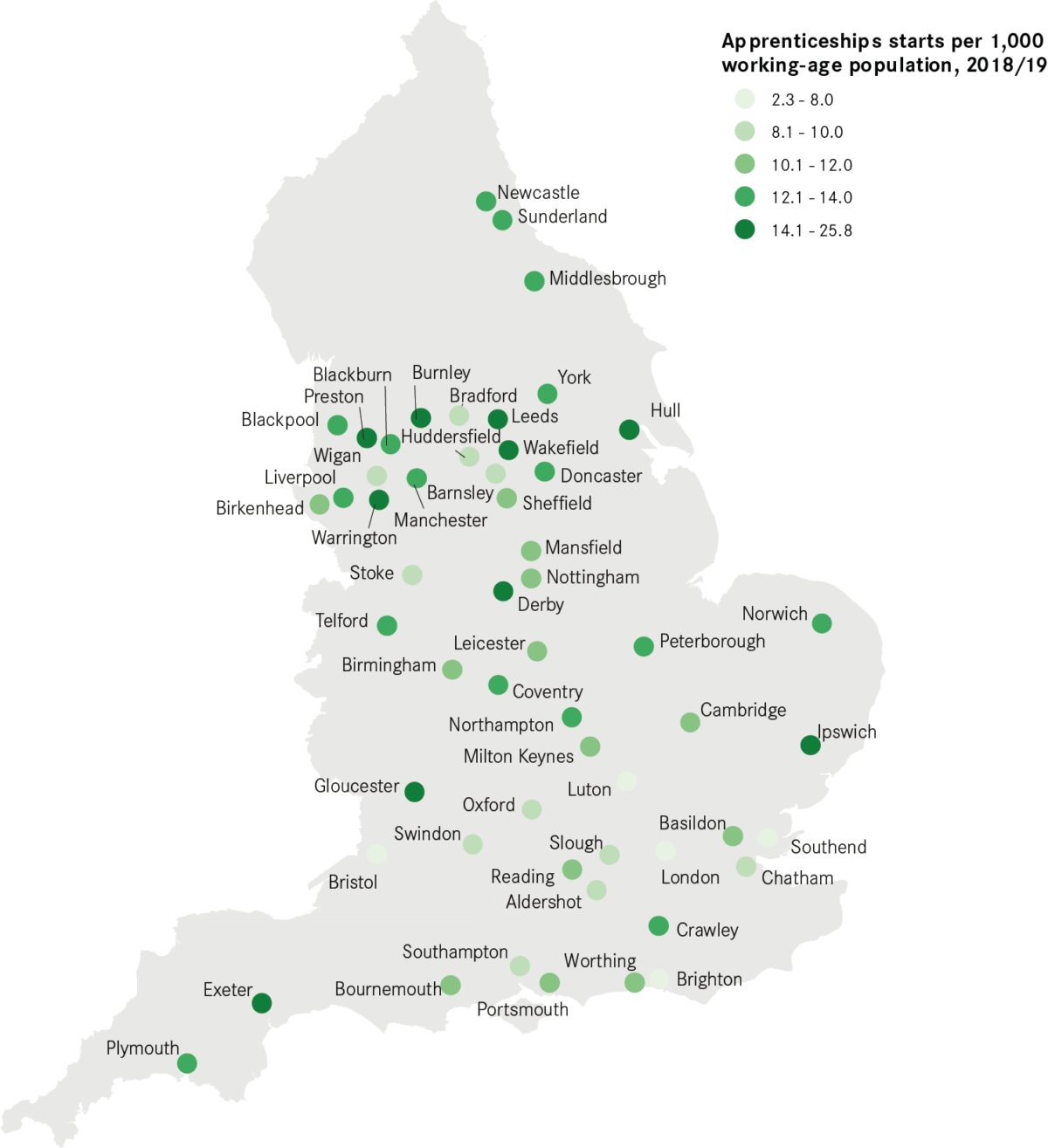 In which cities are apprenticeships more popular among young people?

Apprenticeships are open to anyone who’s 16 years old or older, but there is considerable variation in take-up from one place to another. In 45 out of 55 English cities, the majority of apprentices are 25 years old or younger and in four cities – Derby, Southend, Basildon and Blackburn – the share goes up to over two-thirds. In contrast, Cambridge is the city with the fewest young apprentices (43 per cent) followed by Wakefield and Liverpool.

In which cities are apprenticeships more likely to offer a ladder to further opportunities?

If historically apprenticeships were considered a way to enter a trade, they are now also increasingly seen as an alternative route to higher education – with apprenticeships now available at level 4 or above, i.e. at a level equivalent to degree level qualifications.

In contrast, in other cities take-up of apprenticeships is skewed towards particular levels. Interestingly, there is a North/South story here: in many northern and Midlands cities — places like Mansfield and Barnsley — there was only one higher level apprenticeship for every four level 2, intermediate apprenticeships.

On the other hand, some southern cities also have a very skewed offer, but in this case, it is usually towards higher-level apprenticeships. In Cambridge, over half of all the apprenticeships provided are higher and degree apprenticeships, while in Reading it is 37.5 per cent. 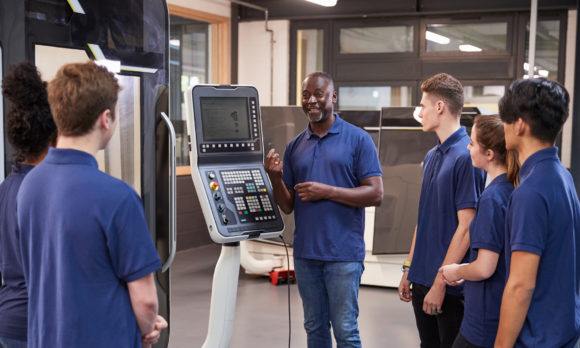 Which cities have the most varied apprenticeships offer?

Interestingly, despite their much smaller size (38th and 31st in terms of population respectively) Derby and Doncaster had a much more varied offer than other larger cities – coming in 13th and 14th position respectively, with apprentices enrolled in over 160 different apprenticeship standards in the past academic year.

What are cities doing to encourage take-up of apprenticeships among employers and individuals?

Cities have identified two challenges in particular when it comes to improving take-up of apprenticeships in their local area.

The first is lack of awareness among individuals. To fight this, Liverpool City Region and the Greater Manchester Combined Authority have both decided to create UCAS-style platforms where individuals can easily browse all the apprenticeship offers in their local area, in a similar manner as to university provision.

The second challenge instead is around helping businesses navigate the new apprenticeships levy system. On one hand, small businesses are struggling to introduce apprenticeships because of the hidden costs they entail in terms of human resources and time. On the other hand, large businesses are not always able to fully spend their levy, and are interested in passing it on to other businesses in their supply chain and related activities to make the most of it.

To respond to these needs, places like Liverpool and Manchester have set up local brokerage services to facilitate the matching between large, levy-paying employers and smaller, non-levy payer businesses, assisting them with the transfer of the levy and providing and identifying suitable education routes for their needs.

Levelling up The Future of Work
Future of cities Levelling up
Report launch: The role of regeneration in levelling up