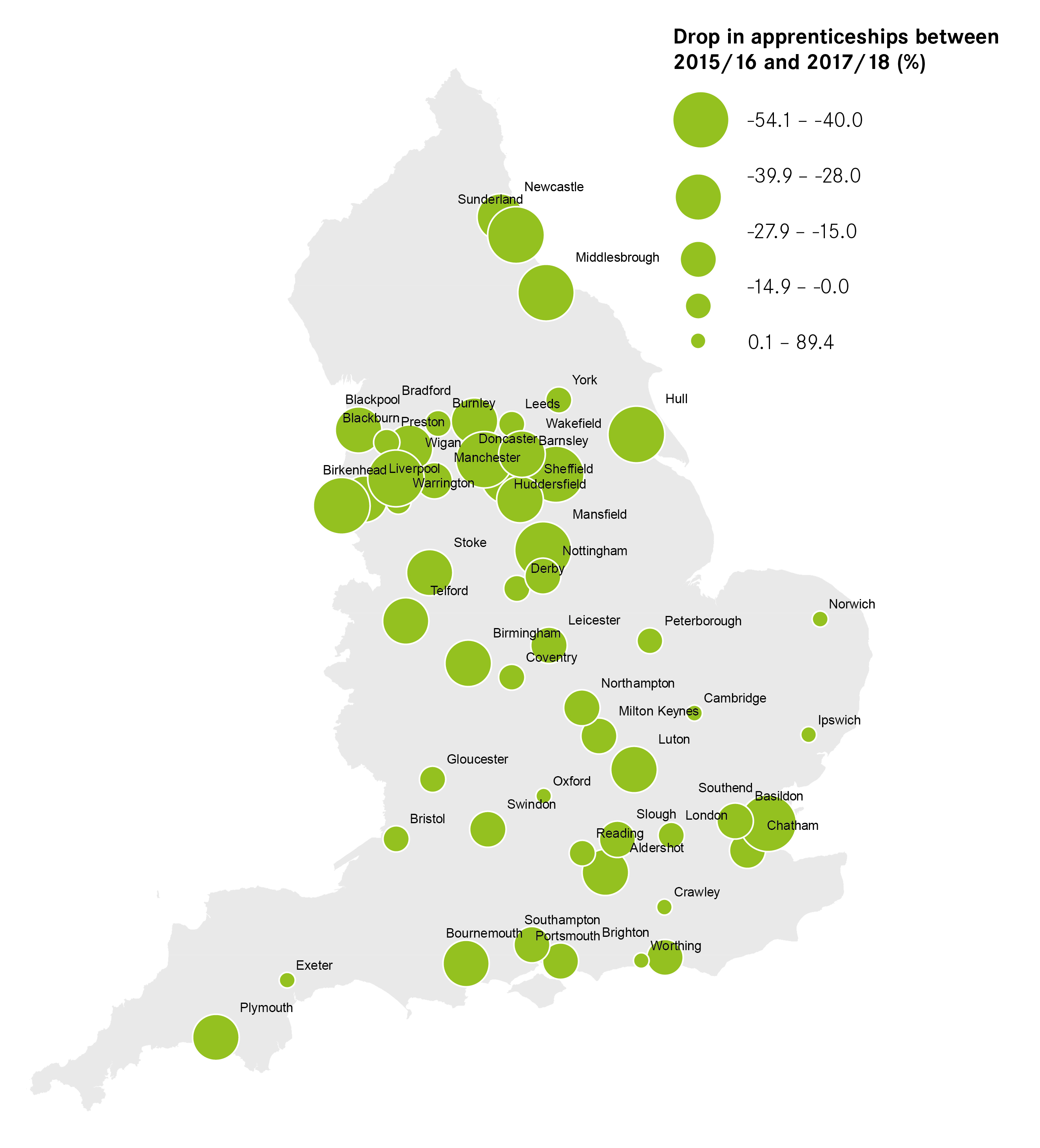 Source: Department for Education, Apprenticeship starts by delivery in each Local Authority District by Provider and Level 2017/18 – Starts

Meanwhile, just seven cities have bucked this trend and saw an increase in apprenticeship starts between 2015/16 and 2017/18. These include cities such as Oxford, Cambridge and Exeter. 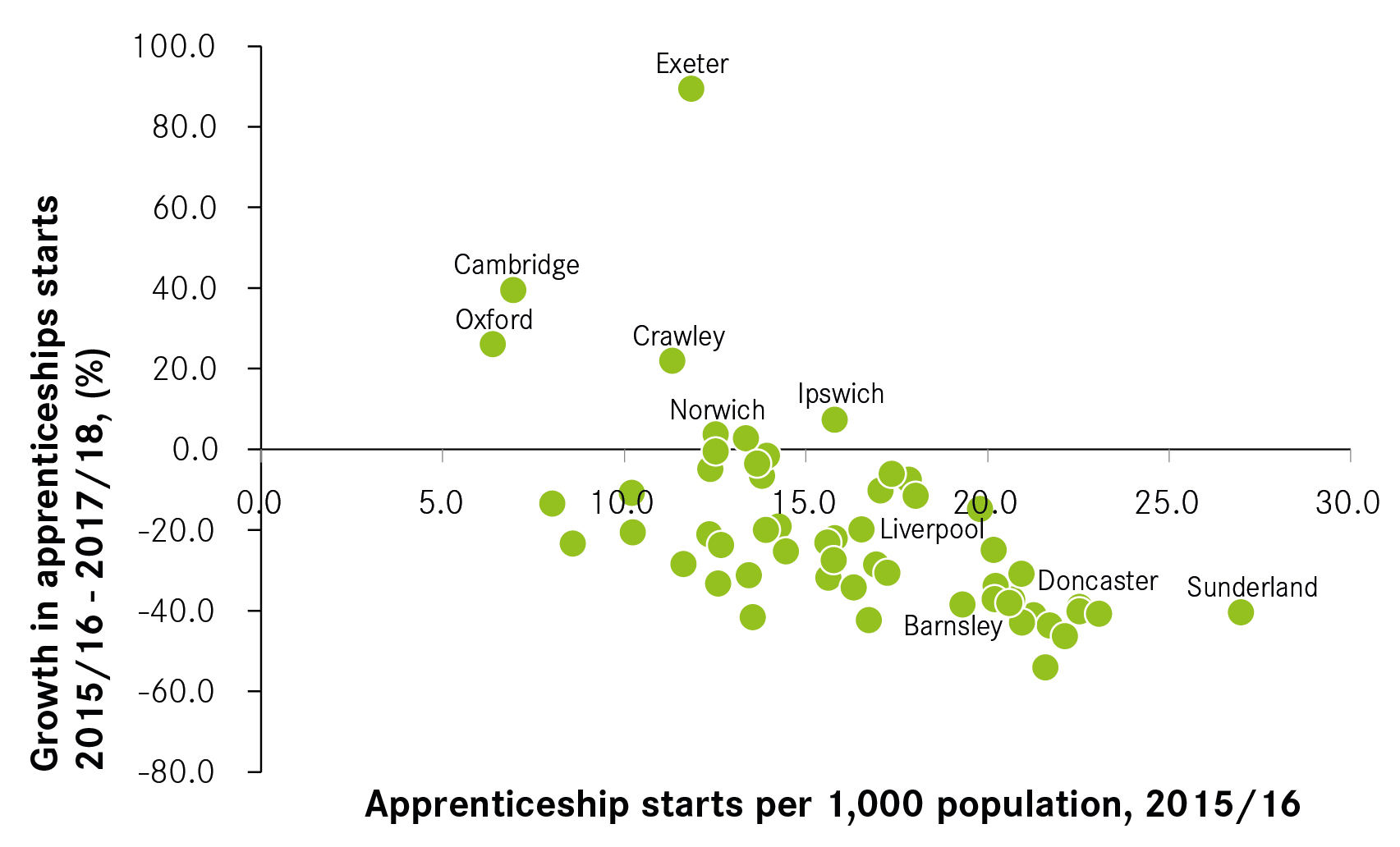 Source: Department for Education, Apprenticeship starts by delivery in each Local Authority District by Provider and Level 2015/16 and 2017/18 – Starts

There are two explanations for the patterns in the chart above, both of them related to the type of apprenticeships that people are starting. Firstly, take up of intermediate level (good GCSE-equivalent) apprenticeships fell by more than a third nationally in the last year. This has particularly hit cities in the North and Midlands where intermediate apprenticeships are more popular.

Secondly, the introduction of higher level and degree apprenticeships has meant that businesses in places that were traditionally less engaged with apprenticeships are now growing their stock of apprentices.

These changes may be a temporary consequence of the introduction of a new system, with numbers returning back to normal once employers get their head around the new rules.

However, news coverage suggests that since the introduction of the Levy, employers have been trying to ‘game’ the system by enrolling existing senior staff in higher apprenticeships getting a better and easier return on the money they had paid in the Levy.

So what can cities do about this?

First, they should be cautious about calling for the devolution of the Levy. Since the introduction of the Apprenticeship Levy, local authorities up and down the country have been frequently calling for it to be devolved. Yet, recent research by the Centre for Vocational Education in partnership with our sister organisation the What Works Centre for Local Economic Growth , has found that the impact of devolving the Apprenticeships Grant for Employers through City Deals was limited, and that this could partly be due to the fact that devolution of the funding was negotiated on the wrong margins, such as by asking for more flexibilities for large employers when actually this scheme was somewhat more successful at improving take-up of apprenticeships in small and medium-size businesses.

Therefore, if Sadiq Khan, Steve Rotheram and the other mayors now want devolution of the Apprenticeship Levy, the first step they should undertake is gathering intelligence on how apprenticeships work in their local areas to make their intervention as targeted as possible, such as who employs them and why.

Second, cities should use their soft powers to make improvements in the existing system. While cities cannot wait for a Government preoccupied with Brexit to fix the apprenticeship system, they also should not just lobby the Government for more devolution.

They should instead make sure they are already using their soft powers to make apprenticeships work. That means, for example, working towards raising awareness of apprenticeships in their local area – a tool the What Works Centre has found effective in raising apprenticeships take-up. Cities should also play a coordinating role at the local level by facilitating interactions between employers and training providers and improving efficiency in the system by mapping existing provision and reducing duplication.

As with every new intervention, it takes time for those involved to adapt to changes. The Apprenticeships Levy will only turn two in April this year, so we should not be too quick in judging its impact. However, we must also not ignore the early signs that suggest the Levy is actually doing the opposite of what it wanted to achieve – increase skills and improve productivity up and down the country.