The race to be the Mayor of Greater Manchester has heated up this week, with Andy Burnham throwing his hat in the ring, Ivan Lewis setting out his vision for the mayoralty, and interim Mayor Tony Lloyd securing support from two of the largest unions.

But whoever becomes Mayor will need to deliver on the expectations of people living in Greater Manchester. As part of our Getting ready for mayors programme ahead of the 2017 Mayoral elections, we polled people across the city region to find out their views on what the top priorities should be for the new Mayor when they take office. 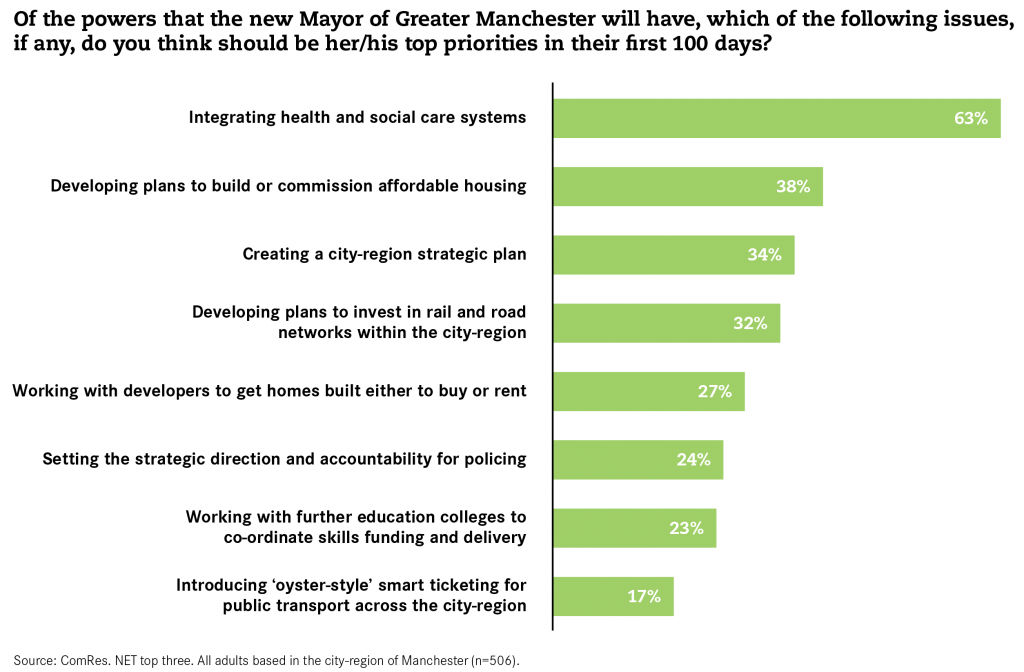 One of the distinctive elements of Greater Manchester’s devolution deal is that it will give the new Mayor powers over health and social care, which mayors in other cities will not have. This is perhaps reflected in the polling results, in which almost two thirds of respondents said integrating health and social care systems should be a central concern for the Mayor, while around a third said affordable housing, strategic planning and investing in the transport network are key issues to tackle.

Although housing in Manchester is cheaper than in half of the cities in the country (with average house prices 6.9 times more than average income, compared to the national average of 9.8 times), the Mayor will also need to be seen to address concerns over a lack affordable housing. There has been a great deal of local media focus on homelessness in the city, and the growing “tent city” in the centre of Manchester in particular, and so it was no surprise that Andy Burnham highlighted the issue in his campaign launch speech this week. This is a visible and emotive issue, and one that the new Mayor will be expected to address as a priority.

It is also notable that despite failing to secure congestion charging in the past, investing in rail and road networks is supported by so many people in the city-region. Making the tough decisions to prioritise investment in certain areas of the city over others will require strong decision making and leadership in these areas. For example, the Mayor might want to prioritise boosting transport which serves the city centre, rather than trying to divide investment pots across the city-region.

To meet these and other priorities, whoever becomes Mayor will need to work closely with the combined authority cabinet – which has the power to veto some mayoral decisions – in order to get things done. He or she will also need to exploit their mandates, and make the fullest possible use of their informal powers to take decisive action on behalf of Greater Manchester residents, and to deliver on the issues that matter most to them.