The skills of workers are a key input to any business. And cities that have highly-skilled workforces are likely to attract more investment from high skill businesses. As part of the research for our recent report Building the Northern Powerhouse, we looked at how skills levels in cities in the North of England measured up against their popular comparators in the Randstad and Rhine-Ruhr. Unfortunately, Northern cities don’t tend to fare too well.

To unpack this it’s worth looking at two different measures of skills – data on those with a degree, and those holding very few qualifications.

The good news is that, in terms of the number of residents that hold a degree, many northern cities compare favourably to their counterparts in the Randstad and Rhine-Ruhr. Utrecht (57 per cent), Amsterdam (48 per cent) and Bonn (47 per cent) had the highest shares of degree holders in 2011 (see table below). But 4th placed York (41 per cent) and 8th placed Leeds (34 per cent) were not far behind. Meanwhile just three cities from the Rhine-Ruhr made the top 20, and the bottom five cities on this measure were all German. On this measure, it is cities in the Rhine-Ruhr that come off the worst. 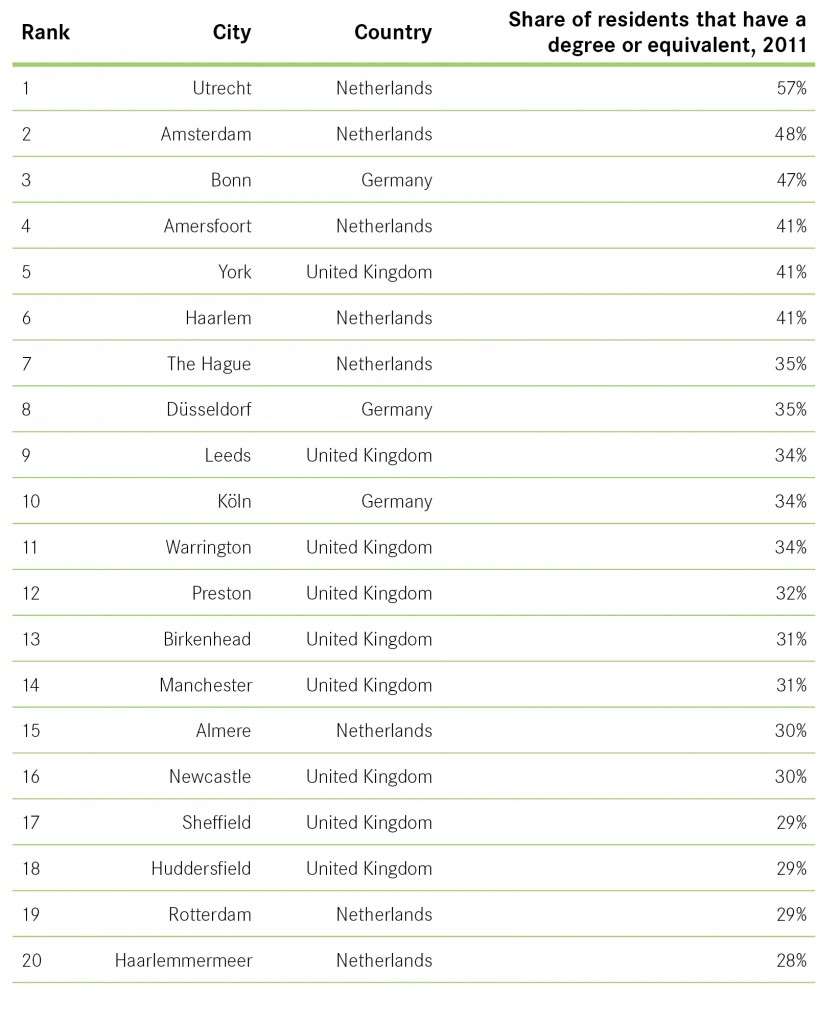 Where northern cities fare much less well is when looking at the share of people that have no or very low level qualifications. As shown in the table below, northern English cities dominate the top 20 on this measure, with Rotterdam being the only city from either the Randstad or Rhine-Ruhr to feature. In cities such as Liverpool, Doncaster and Hull, two-fifths of residents did not have a qualification equivalent to five good GCSEs in 2011. By way of comparison, this figure was less than one in five in Utrecht (15 per cent) and Düsseldorf (18 per cent). 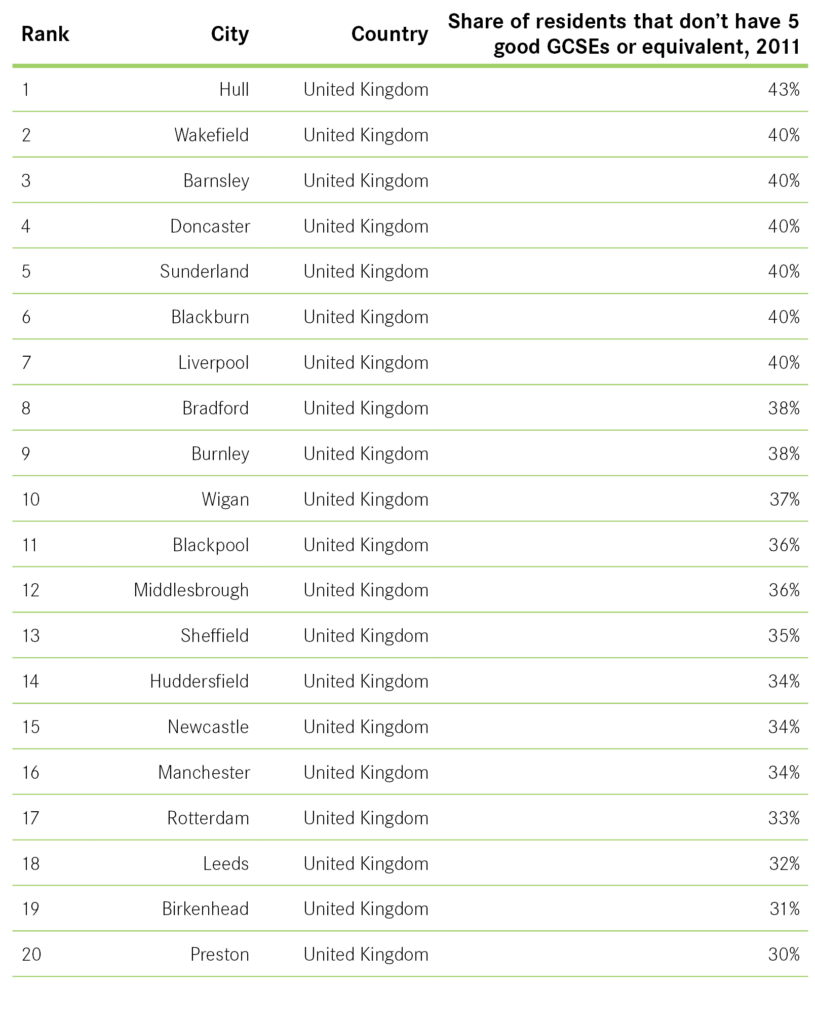 What is striking about cities in the Rhine-Ruhr in particular is that while they don’t have many residents with a degree-level qualification, they have very large shares that have qualifications to the equivalent of five good GCSEs or A-levels. So in terms of the table above, no city from the Rhine-Ruhr appears in the top 20. These figures suggest that the skills system in this part of Germany encourages residents to move beyond very basic qualifications, whereas it does not in cities in the north of England.

The result is that northern cities are at a disadvantage when they compete for investment that requires a workforce with qualifications beyond a basic level. This in part explains why inward investment in the North tends to be in lower skilled activities.

This suggests that improving the skills of the large number of residents with no or very few formal qualifications should be a main goal of the incoming city region mayors who will take up post next year. These mayors will have some control over adult skills funding, and using this to address the skills challenges that their city faces should be occupying the minds of those who have declared they are running for the office.

As our previous research has shown, this should be focused around improving Maths and English in particular. Failing to do so will likely mean that northern cities will continue to struggle to attract investment from higher skilled, higher paying businesses.