UKTI – the body responsible for promoting inward investment in the UK – has in the past been criticised for having a South East bias. But is this criticism fair?

Using the proportion of private sector jobs in foreign-owned businesses as a proxy, the map below shows what patterns of inward investment look like across UK cities. While it’s certainly true that southern cities such as London, Swindon and Reading have been attractive to foreign investment, the trend is not clear cut.

As the map below shows, cities in Yorkshire and the North West have struggled to attract investment from abroad, but there are a number of cities in the North where this hasn’t been the case. In Sunderland, around one in three private sector jobs is in a foreign-owned business (the sixth highest of all UK cities). And Warrington, Telford and Middlesbrough also feature highly. Meanwhile coastal cities in the  South East, such as Brighton, Hastings and Southend have been much less successful. 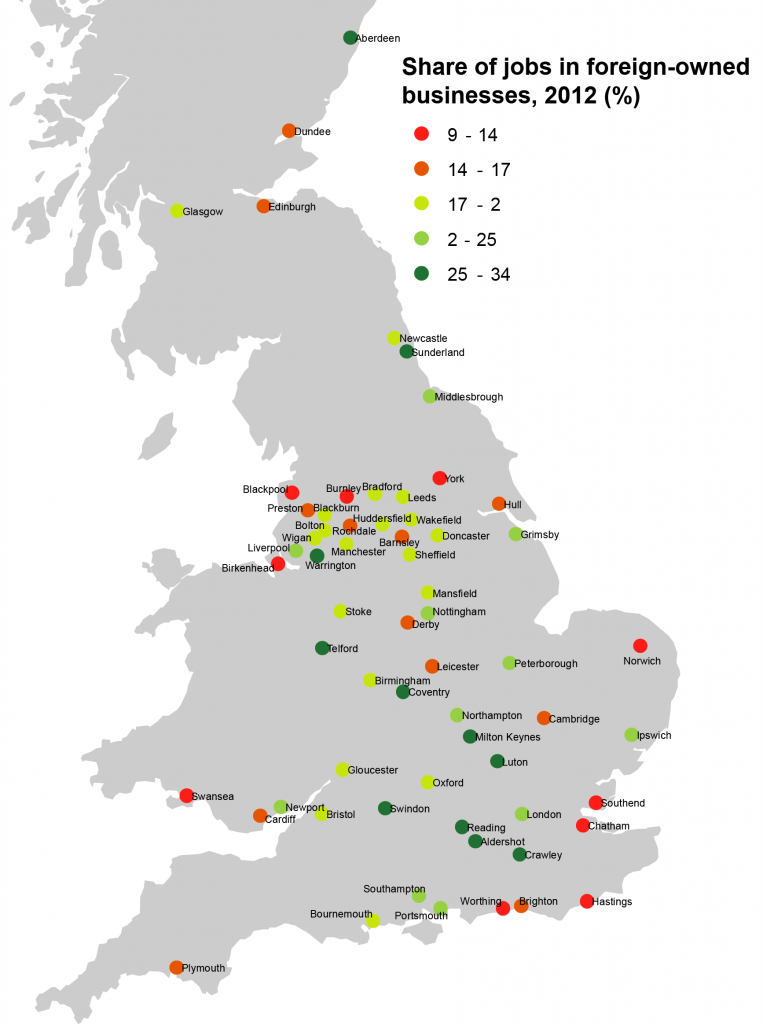 But these patterns say very little about the type of investment and jobs that cities attract. When looking at the proportion of jobs in foreign-owned companies that are in knowledge intensive business services (KIBS), as is done in the map below, a clearer pattern emerges. 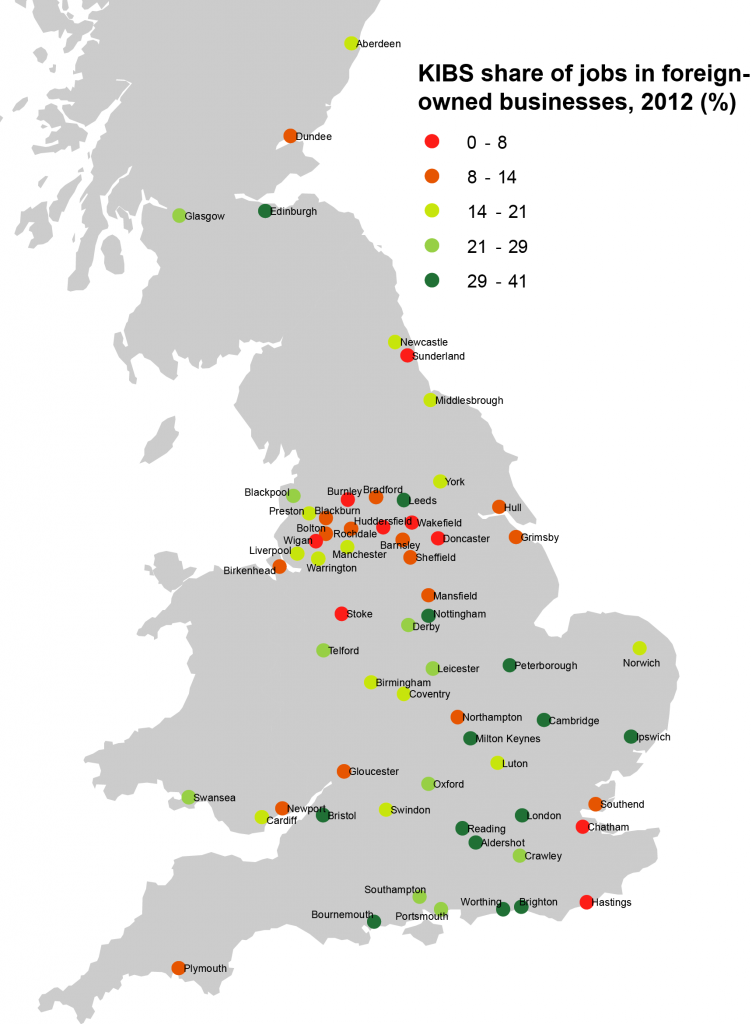 As we show in A century of cities,  it is the stock of knowledge in different cities that determines how attractive they are to different types of investment. Knowledge-focused businesses are prepared to pay a premium to locate in a city that has a large pool of highly-qualified workers that they can recruit from and knowledge-focused businesses they learn from and collaborate with. In Bristol, 39 per cent of residents hold a degree. And in Brighton it’s 44 per cent. This is why they have above average concentrations of knowledge-based companies, despite being more expensive places to do business.

Businesses that are involved in lower-skilled, more routinised activities – such as call centres – have little to gain from paying the higher costs that are often associated with accessing knowledge. Instead they want access to lots of lower-skilled workers and cheap land. This is where the cheaper cities in the North and Midlands benefit from their cost advantages. And this drives the type of inward investment activity seen in many of these cities.

The second is the extent to which this investment is embedded in city economies. More routinised businesses – such as call centres – require lower skilled workers. And their operations can be easily offshored to cheaper locations that also offer a large number of low-skilled workers to recruit from. But knowledge-focused businesses tend to be part of a ‘knowledge network’ of skilled workers, businesses and institutions, and it is more difficult to find these qualities elsewhere. They tend to be more embedded in the local economy they are located in. Our Century of Cities report suggests that patterns of inward investment have less to do with any biases within UKTI and more to do with the characteristics of different places. Attracting high-skilled jobs has less to do with signing a memorandum of understanding with UKTI and more to do with the stock of knowledge in a city.

Where once it was being close to raw materials that determined business location decisions, increasingly it is being close to knowledge that drives where knowledge-businesses locate. If cities want to make themselves attractive to investment, be that from the UK or overseas, then they must focus on increasing the stock of knowledge in their economies.

Read more in A century of cities.