One common complaint about London is that it acts as ‘a giant suction machine draining the life out of the rest of the country’ – an idea expressed by Vince Cable MP when Business Secretary, and often repeated by others. But our latest report suggests that this isn’t entirely accurate.

London certainly is a magnet for young professionals. Our Great British Brain Drain report looked at where students and new graduates move around the country and showed that London is attractive to high achieving graduates in particular. Despite accounting for 19 per cent of all jobs, almost a quarter of new graduates worked in London six months after graduating. This increased sharply for higher achieving graduates and was particularly marked for Oxbridge graduates, 52 per cent of whom found themselves working in the capital six months after graduation.

But if London does suck economic activity from elsewhere, you would expect to see those places closest to it doing the worst – and this isn’t the case. Previous Centre for Cities research has shown that many of our most productive cities are located close to the capital. And as our latest report Talk of the Town shows, some of our most successful towns are those located in its orbit too.

For example, the map below shows the share of people either unemployed or claiming long-term benefits in towns 2011 (the latest available data for towns). It shows that towns neighbouring London have the best employment outcomes, with places such as Basingstoke and Newbury doing particularly well. 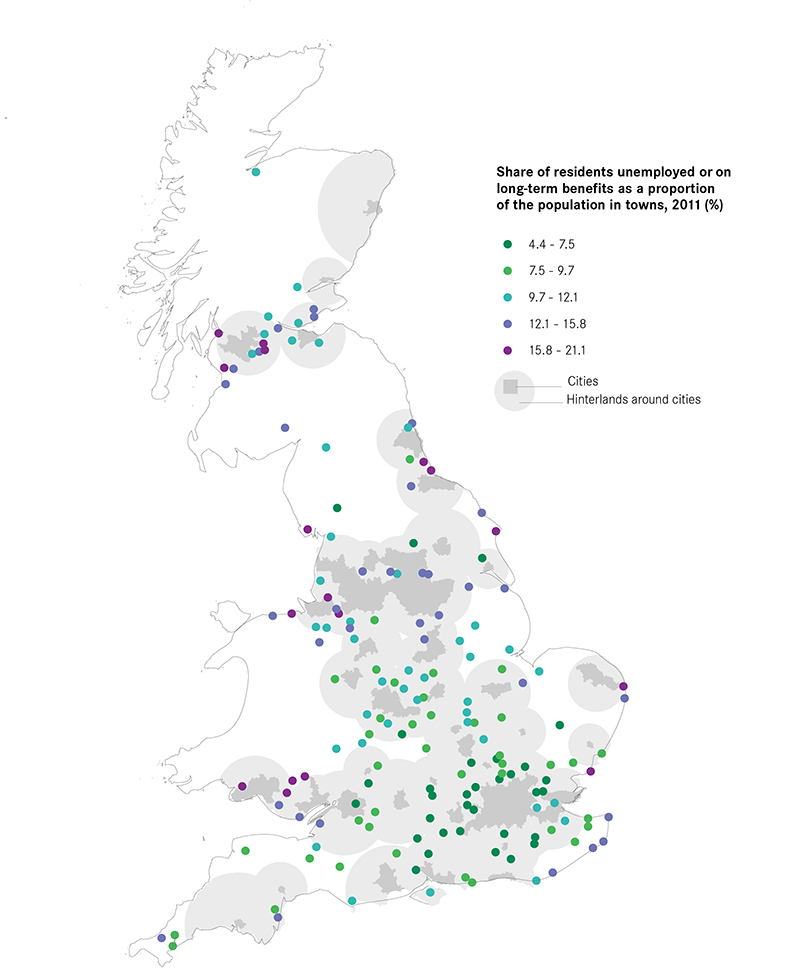 Share of residents unemployed or in receipt of long-term benefits, 2011. Source: Census 2011

While commuting to London plays a part in this, proximity to the capital also appears to strengthen the economies of nearby towns by making them more attractive places for investment too. On average, 22 per cent of jobs in London’s neighbouring towns were in high-skilled exporting jobs (those that are more productive and higher paid), compared to the overall town average of 17 per cent. And as the chart below shows, the share of these jobs tends to be lower for towns either close to weaker cities or in more rural locations, despite the cheaper cost of commercial space in these areas. 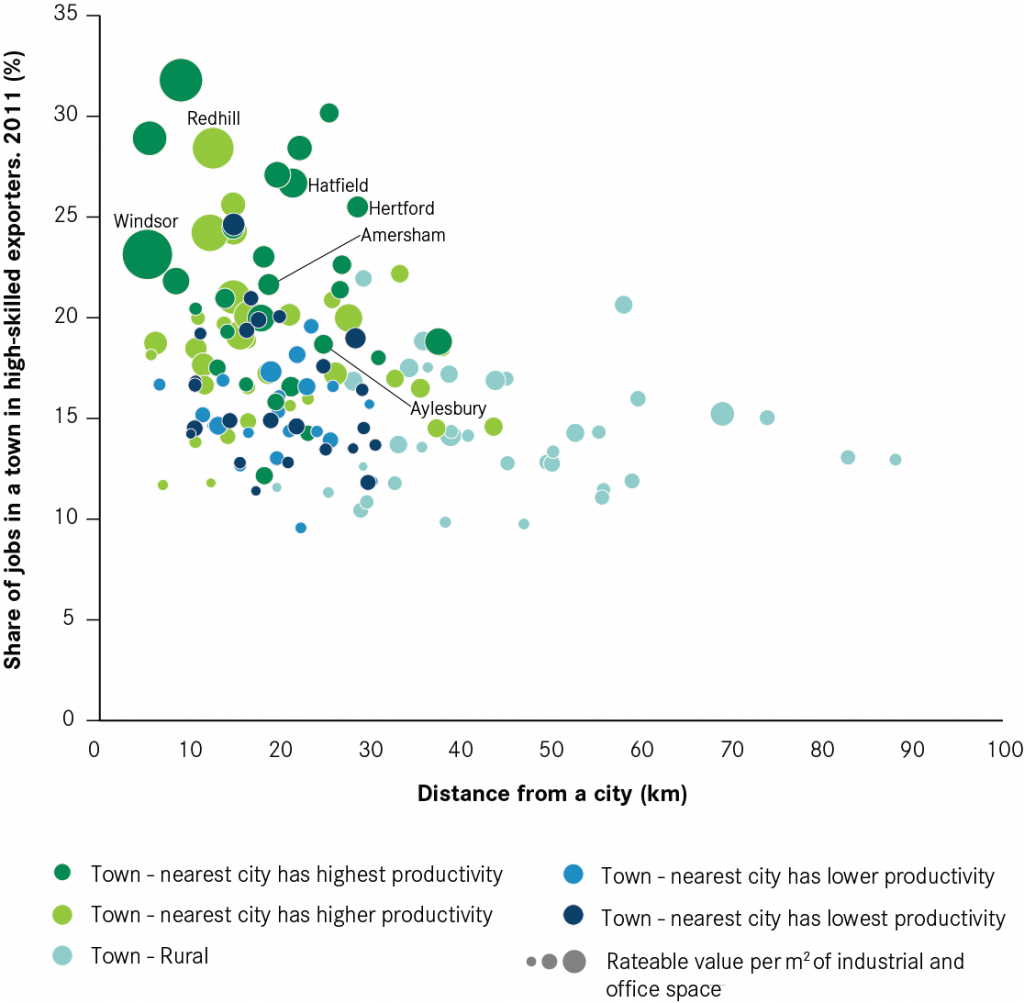 The economic structure of a town, proximity to a city and cost of commercial space. Source: Census 2011; VOA

Towns close to London also benefit from the movement of higher-skilled people out of the capital. While there is an inflow of young professionals into London in their 20s, this trend is reversed for people aged from 31 onwards with a net outflow of this cohort, many of whom have a degree. Many of these people don’t move very far though, with over half of the people who left London moving to a town or countryside location in the Greater South East.

The concerns that Cable and others have expressed about London have also been applied to other big cities. For example, the Northern Powerhouse minister Jake Berry has suggested that the growth of Manchester and Birmingham is sucking the life out of their surrounding towns too. But our research shows that it’s actually their underperformance of both these cities that should be of concern for nearby towns, not their success.

Reflecting the experience around London, those towns close to successful cities tend to have better employment outcomes, in part because of access to jobs in the nearby city, and stronger economies in their own right. It is the lack of a halo around our less successful economies that is the problem. And this isn’t just bad for the residents of that city and the national economy as a whole, but also for the residents of nearby towns too.

As such, towns across the country shouldn’t be concerned about whether neighbouring cities are too successful – but instead whether they aren’t successful enough.