It is good news for the urban regeneration projects announced in February’s Levelling Up White Paper that Michael Gove is back as Secretary of State for DLUHC. However, rather than focusing on levelling up cities by helping them attract more productive firms and jobs to their city centres, Gove has hinted that these programmes might focus on housing instead.

It is important that city centres provide some homes, but with housing starts predicted to fall sharply next year it is even more important that planning reforms make it easier to build higher density housing in the suburbs.

The Bristol Temple Meads and York Central regeneration schemes, both in or near city centres, intend to provide much more space for housing than office space or other uses. It’s understandable why with housing affordability poor and worsening in both cities.

However, despite the need for more housing, neither of these cities are building enough new homes in their suburbs. Figure 1 shows Bristol and York  only increased their suburban housing stock by six and four per cent respectively between 2011 to 2019, just equal to or smaller than the national suburban increase of six per cent.

In contrast, housing stock grew rapidly in their city centres, with Bristol’s growing by 27 per cent and York’s growing by 16 per cent.

Figure 1: City centres are growing their housing stock much more than suburbs 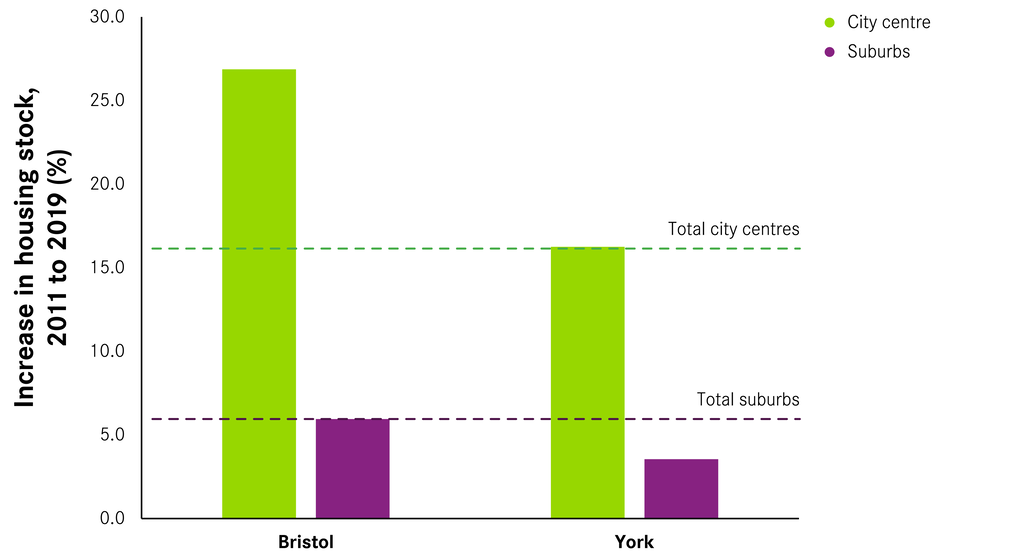 This pattern is happening across UK cities.  Figure 1 shows the total city centre housing stock has increased by 16 per cent since 2011, nearly three times more than the increase in the suburban housing stock.

The planning system is pushing housing into city centres

The reason suburbs build so few additional homes is because the planning system makes suburban developments costly and risky. This makes large ‘plan-led’ housing developments in the city centre or on the outskirts of the city much easier to build by comparison.

Most neighbourhoods in existing suburbs don’t have many large greenfield sites left to build on, so they add almost no new homes, with over half of suburban neighbourhoods adding less than one home a year from 2011 to 2019. Many cities are also stopped from building new homes on their outskirts by greenbelts. Bristol and York are both confined by greenbelts, which is one of the reasons for why their suburban housing stock isn’t increasing by much.

City centres are key to boosting the UK’s productivity, but building homes there is not the way to achieve it. Michael Gove needs to ensure urban regeneration programmes focus on making city centres attractive to more productive firms and jobs rather than building housing.

But the Government still needs to alleviate housing pressures somehow. This means finding a way to densify existing suburbs and free up greenbelt land for development.

Based on the ongoing revolt by backbench MPs against housing targets, any policy to boost suburban house building will be politically difficult. However, there are still steps the Government should take, like using the National Planning Policy Framework and the New Homes Bonus to incentivise suburban densification.

Future of cities Levelling up
Making places: The role of regeneration in levelling up

Centre for Cities' new report in partnership with Aviva argues that for the Government's regeneration schemes to succeed they should focus on city centres and be backed by public funding and planning reform.

For the Government's regeneration schemes to succeed, they must prioritise city centres and be backed by substantial public funding to maximise private investment opportunities.

Despite spending cuts, the Government should make room in the budget for regeneration .

If the Government is serious about getting the UK’s economy growing, it should look to regeneration in city centres.