This year’s edition of Cities Outlook shows that not all high streets have been evenly affected by the Covid storm. This blog pulls out two case studies to illustrate its main findings: how have Cambridge, one of the most successful cities in the UK, and Mansfield, a ‘red wall’ town at the heart of the levelling up challenge, weathered the Covid shock? What does that tell about the future of their high streets, and, in light of the recent publication of the Levelling Up White Paper, what’s needed to ‘level-up’ the high street?

On the eve of the pandemic, Cambridge and Mansfield were on opposite ends of the spectrum 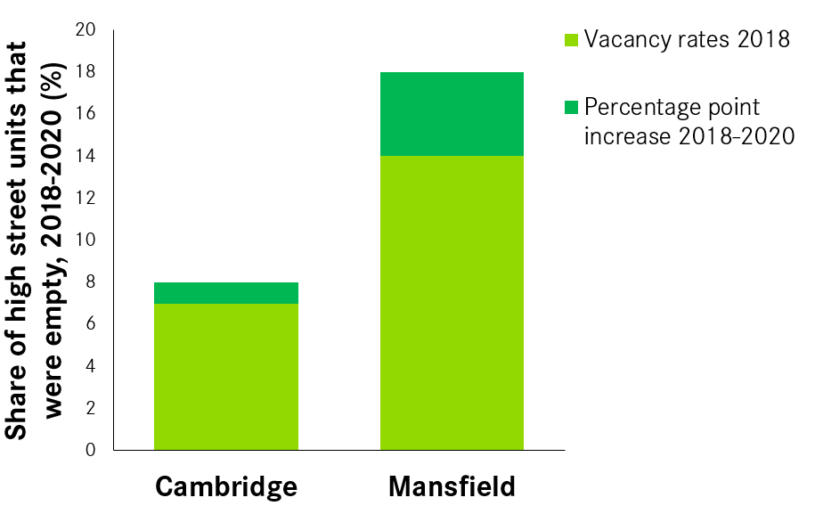 In both places, the performance of the high street was a symptom of the strength of the city centre economy as a whole. Mansfield was typically struggling with post-industrial decline and a low-wage, low productivity labour market- only a third of all exporting jobs in its centre were high-skilled (Figure 2). Cambridge, on the other hand, benefited from an ever-greater specialisation in the knowledge economy: more than 66 per cent of exporting jobs were in high-skilled sectors like financial services, marketing or law. The combination of high-paid jobs in the city centre, an affluent catchment area and the presence of domestic and international tourists effectively created a pool of customers with a lot of money to spend in shops, pubs and restaurants. This also meant that a higher share of sales made online did not represent a significant threat for the high street: what really mattered was the total amount of money that circulated in the local economy. By contrast, in Mansfield, people had less disposable income, fewer people came to the city centre for shopping or leisure, and more high street units stood empty as a result- despite lower levels of internet shopping.

It also influenced the offer on the high street. In Mansfield, the limited spending power meant that people allocated more of their day-to-day budget to essentials like groceries, and the remaining non-essential offer was heavily skewed towards retail and fashion; while in Cambridge the affluent customer base sustained a wider range of amenities- not just retail, but also bars and restaurants.

Figure 2: Cambridge and Mansfield entered the pandemic in a very different position 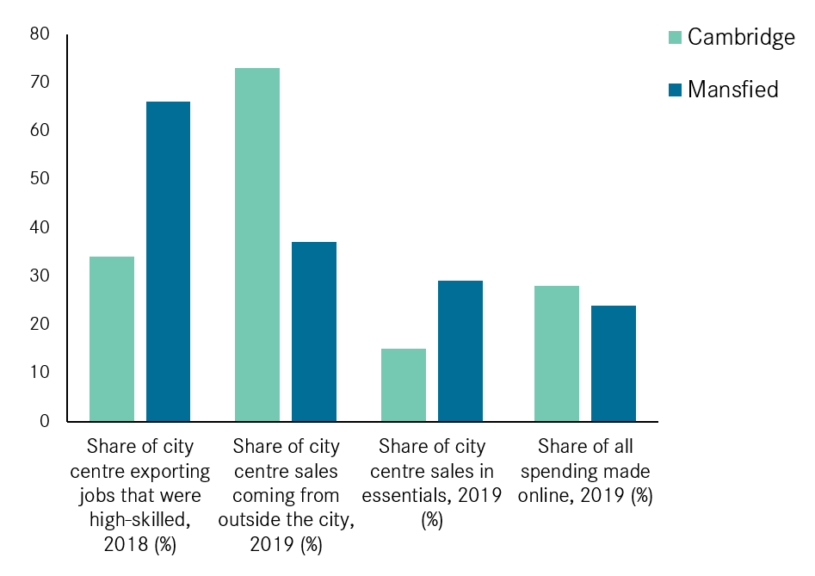 Note: the higher the CAMEO score, the less affluent the people who are spending in an area.

The Covid storm led to a reversal of fortunes

Although broadly the same restrictions were imposed in both cities, Cambridge was hit much harder. Data on consumer spending shows that it lost the equivalent of 36 weeks worth of sales between March 2020 and September 2021, nearly three times more than in Mansfield (13)

This is because the factors that previously drove Cambridge’s success turned into a weakness: travel restrictions and remote-working guidance drastically limited the daily influx of shoppers, visitors and workers (as more city centre jobs could be done from home). And the fact that a higher share of commercial units was occupied by non-essential businesses made them more vulnerable to forced closures. This contrasts to Mansfield where fewer jobs could be done remotely, businesses lost a smaller proportion of their usual customer base, and less spending was cut back as most essential shops remained open.

This had a clear impact on the high street. The number of vacant units went up in both places, but more weeks of lost sales in Cambridge translated into a higher number of shops closures (Figure 3). By November 2021, about 12 per cent of units were vacant in Cambridge- a four-percentage point increase. In Mansfield the increase was much more muted (+ 1 percentage point).

Given Mansfield’s previous struggles, it is on the face of it very surprising that the rise in vacancy rates slowed down during the pandemic. It’s likely that the emergency support provided by the Government played a key role in mitigating further damage. Cambridge benefited more in monetary terms from business rates holidays, but many businesses in Mansfield were already exempt- so this measure only brought parity between the two cities (Table 1). What’s made a difference, though, is the grants they received: businesses in retail and hospitality received about £2,000 more on average than those in Cambridge, despite having lost fewer weeks’ worth of sales. This, combined with the fact that running costs (commercial rent in particular) were lower in Mansfield has meant that the financial support stretched much further. And it partly explains why, paradoxically, the long-lasting rise in vacancy rates in Mansfield actually slowed down during the pandemic.

What does that mean for the future of both places?

If ‘normality’ returns as restrictions are being lifted, then Cambridge is likely to bounce back to a position of relative strength. The factors that made it strong in the first place will drive the recovery: a well-performing local economy with many high-skilled, high-paid jobs in the city centre generating demand for local businesses; and a high street that sits within a wide and affluent catchment area, with students and tourists progressively returning.

If however the ‘new normal’ does not mean a return to where we were back in 2019, and in particular if more workers decide to stay at home, then high street businesses might need to adapt to a permanently reduced number of customers.

In Mansfield, business support might have delayed the pain- in which case the full impact of the pandemic may not yet have happened. And bouncing back to where it was back in 2019 will mean returning to a position of relative weakness, and returning to a cycle of low footfall and growing vacancy rates on the high street.

So, what does all of this mean for levelling up? The primary challenge is to boost consumer spending power, rather than make cosmetic high street changes. This means that policy makers need to address the underlying economics behind the lack of demand and improve the strength of the city centre economy. The priority should be to make the city centre a better place to do business, by attracting investments from high-skilled, high-productivity businesses and creating high-wage jobs which will then push demand for shops, cafes and restaurants.

Some of the policy responses put forward in the recently published Levelling Up White Paper to ‘revitalise’ high streets do this in part, but instead of placing the focus on ‘place-making, planning and design’, they could have gone further by explicitly linking the health of the high street to the health of the wider economy.

How have two years and three lockdowns changed our shopping habits, and what does this mean for the future of our city and town centres?