This morning I switched on the radio to hear Greg Clark (Business, Energy and Industrial Strategy Sectary) being quizzed on BBC Radio 4 about why UK productivity is below that of France and Germany. This is of course an important question. But looking at the national picture alone obscures where the problem lies – and how the Government can start to address it in this week’s Budget and the upcoming Industrial Strategy.

Above all, what’s been overlooked in debates about productivity in recent years is how it varies across the country. On an hourly basis, a worker in the Greater South East (GSE) produced 7 per cent more than her German counterpart in 2015, and this area is one of the most productive in Europe. But this isn’t the case elsewhere in Britain, where on average workers produced 22 per cent less than in Germany.

Much of this comes down to the diverging performance of cities in different parts of the country. In our series of briefings on the industrial strategy published in recent months, we’ve shown the importance of cities to the national economy, particularly as the UK continues to specialise ever more in more knowledge-based activities.

Productivity improvements are led by exporters, and the overall differences in productivity in cities are a result of differences in their exporting bases. The figure below shows the variation in productivity of sectors in cities in the GSE and elsewhere in Britain. While all sectors are more productive in GSE cities than elsewhere, this is particularly the case for those sectors such as manufacturing and information and communications (on the left side of the chart), which are more likely to export. There is much less variation in ‘local services’, such as retail and restaurants, that make larger contributions to employment than they do to productivity. 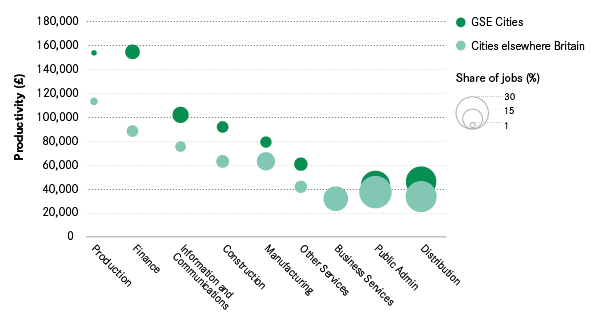 This means that if policy is to improve national productivity, then it needs to remove the barriers that deter higher-skilled exporting businesses from investing in many cities outside of the GSE. The aim should be to attract investment from engineering and designing activities (for example), rather than call centres.

We’ve made a number of suggestions in our industrial strategy briefing series as to what this should focus on. Improving transport links within cities is one of them, so today’s announcement of the Transforming Cities Fund – a £1.7 billion fund to improve transport within big city regions –is very much welcome. The West Midlands will receive £250 million, and we’ll watch with interest to see what’s awarded to other places in the coming days.