Amongst UK cities, many of which are struggling or going through a slow transition, Cambridge stands out as an unquestionable success story. The combination of a world leading university and the most skilled workforce in the UK has been fuelling growth in knowledge intensive business services (KIBS) which now account for 1 in 4 private sector jobs in the city. Yet the spatial make up of employment in Cambridge doesn’t reflect what we would expect from a knowledge driven economy.

Our recent report showed that KIBS jobs, more than any others, like to locate in dense urban centres where they can benefit from knowledge spillovers. This is not the picture that we see in Cambridge. Figure 1 shows that the geographic centre of Cambridge (within 0.5 mile of the Market Square) has less private sector jobs than the 0.5 mile wide doughnut area surrounding it, and the largest number of jobs are actually between 2.5 and 3 miles away from the city centre. This rather unusual pattern reflects the history of the place.

Figure 1. Locations of jobs within 10 miles of Cambridge city centre.

The university was the heart of Cambridge for over eight centuries and the modern city is shaped around the old college buildings. The city centre, dominated by medieval architecture, attracts the best academic talent in the world and crowds of tourists, but leaves very little space for businesses.

Despite this constraint, the large skilled population and workforce and the University still attract lots of innovative businesses to Cambridge. And to respond to the demand for business space, Cambridge has developed business parks on the fringes of the city.

The Cambridge Science Park was established in 1973 by Trinity College just two miles north-west of the city centre. St John’s Innovation Centre was opened on the neighbouring site in 1987. Figure 1 shows that these parks still accommodate a significant proportion of private sector employment based in the city. Following the success of the first business parks a great deal more were built around the city boundaries. Figure 2 shows 11 office employment sites near Cambridge and more are still to come. 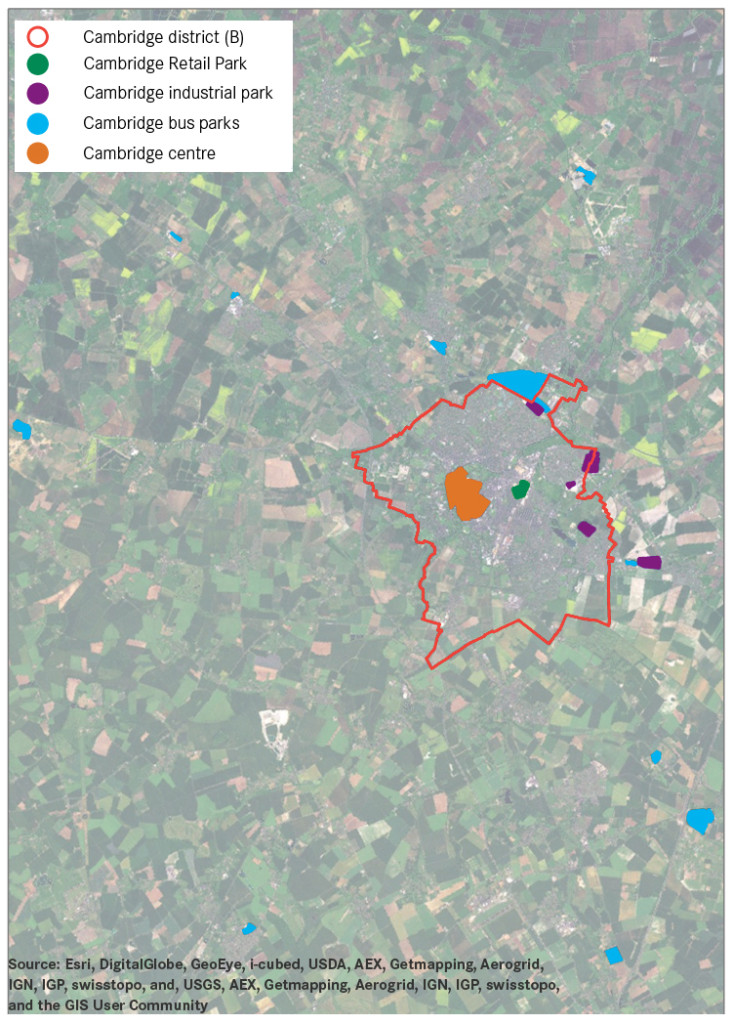 But business parks are not the appropriate solution for all businesses. They tend to be spread across space, are rather low density and not connected into the wider city fabric. All of which limit the opportunities for knowledge spillovers. The world’s largest centres for KIBS industries like New York and Tokyo are known for their high density city centres. London and Paris on the other hand have responded to the demand for such environments by developing new high-rise business districts outside the core.

It is interesting that a natural response to the demand for a high density space is emerging in Cambridge. Large scale office and residential developments around the train station anchored by the likes of Microsoft have a potential to become the new business centre of the city.

A dense business core has been the missing piece of the puzzle in the success story of Cambridge. If the new cluster is allowed to grow and expand, Cambridge would be well placed to stay ahead of global competition for decades to come.

Previous blog in the series: Patterns of growth in Birmingham