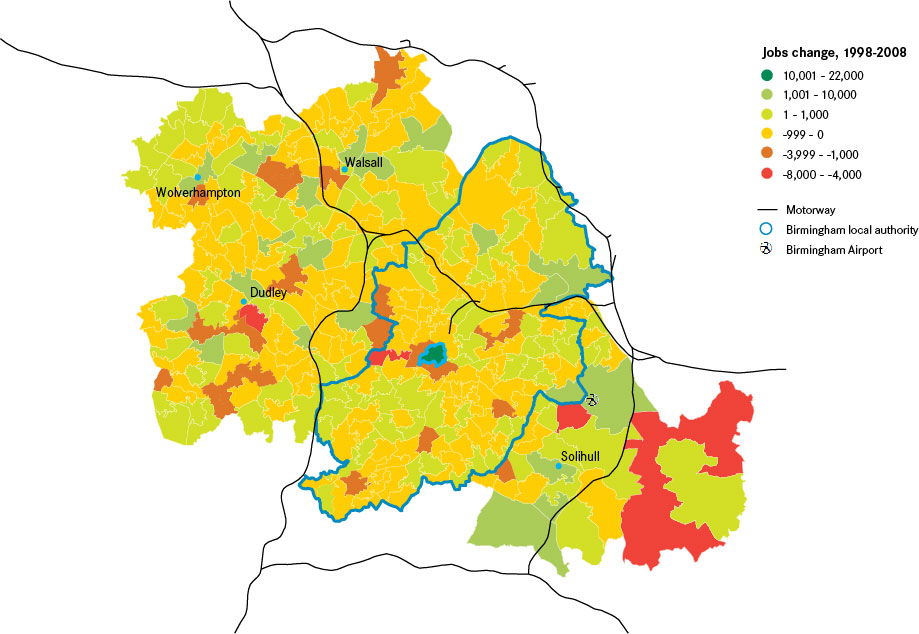 The recent performance of Birmingham’s city centre is interesting in the context of the history of policy in the city. In 1988 the city council brought together people from the UK and abroad to come up with ideas for the regeneration of the city centre, a gathering that became known as the Highbury Initiative. Subsequent actions focused on making changes to the inner ring road or ‘concrete collar’, which was seen as being restrictive on the growth of the city centre, designating different parts of the city centre as ‘quarters’ (e.g. the jewellery quarter) and improving pedestrian access and the public realm. While it’s difficult to say what impact these interventions have had (although this impact must surely have been positive), they do at least offer an avenue for further investigation for those cities that have struggling city centre economies.

What do these patterns of growth suggest about the future of Birmingham’s economy? Overall the city has struggled in recent years and tends to lag behind many other large cities on a range of economic indicators. But the strong performance of the city centre, and the make-up of this growth, suggests that Birmingham may be turning a corner. While the wider city continues to deal with the decline of manufacturing, the knowledge-based services growth in the city centre puts the city in a strong position to contribute to future economic growth as the UK continues to specialise in this type of activity.

As part of our work on city centre economies we have produced a briefing paper on the geography of jobs in Birmingham, which looks in more detail at the patterns of private sector jobs growth in the city and the sectors responsible for these patterns.

Previous blog in the series: The geography of jobs in Brighton and Wakefield

Next blog in the series: An alternative city centre for Cambridge