Manufacturing plays a larger role in Burnley than in any other British city, taking up 22.6 per cent of its total jobs share. And yet despite this, it has one of the weakest economies of any UK city. So how does this square with calls for a manufacturing renaissance to create a brighter future for struggling places?

This isn’t something that is unique to Burnley. As the chart from our data tool below shows, those cities that had a higher share of jobs in manufacturing tended to have lower productivity in 2017. And no British city with over ten per cent of its jobs in manufacturing met the national average in GVA per worker. On the other hand, the top ten performers in terms of productivity had much lower shares of jobs in the manufacturing sector (of these, Swindon had the highest share at 8.4 per cent). 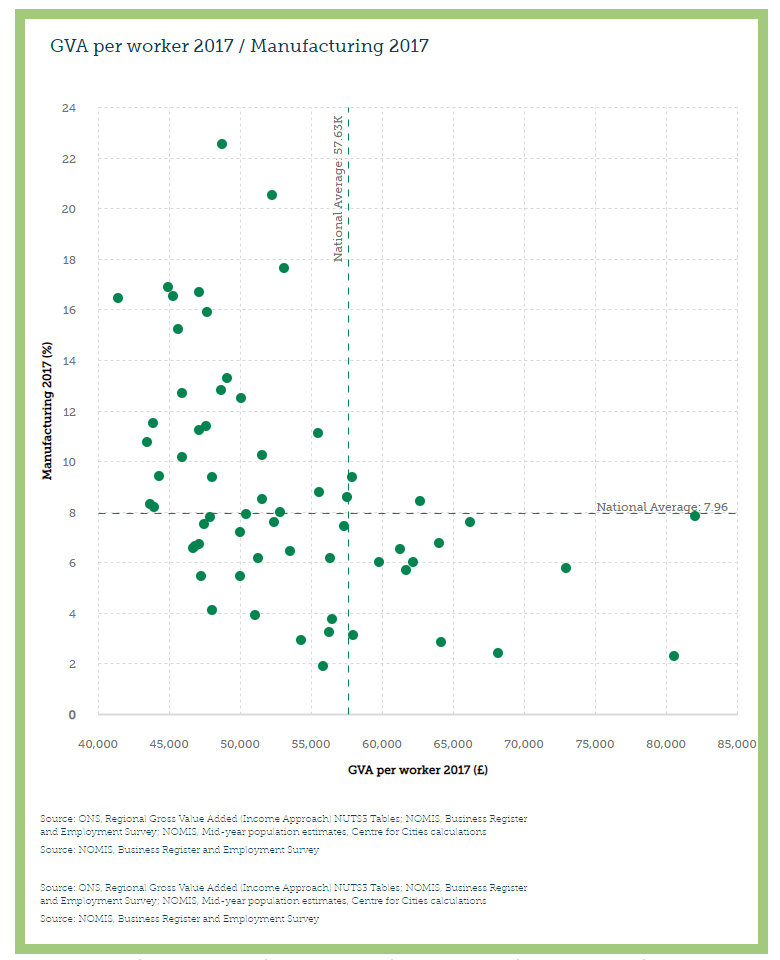 Burnley’s lagging performance in terms of productivity is reflected in how well it does on other measures too. Cities Outlook 2019 shows that it:

This sits somewhat uncomfortably with the notions of both Labour and the Conservatives of rebalancing the economy towards manufacturing. The line goes that Britain doesn’t make anything anymore and, in a world of black and white and no shades in between, is over-reliant on finance and doesn’t make enough goods. But if anything, the data suggests that what Burnley needs is a rebalancing away from manufacturing if its fortunes are to improve, not more of the same.

It also challenges the notion of looking at an area’s ‘strengths’ when assessing its performance, something that many strategies and independent reviews are very fond of doing. But this is the wrong way of looking at the problem. The question for weaker cities like Burnley should not be ‘what do we have?’ Rather, it should be ‘what have we not got enough of?’

In Burnley’s instance, it is a lack of higher-skilled, higher-paid jobs in both manufacturing and services. In manufacturing, data from the Census shows us that for every high skilled job in manufacturing in the city, there are five lower skilled jobs. This compares to a ratio of one to one in Cambridge and Crawley. And at 6 per cent of all jobs in 2017, it had the lowest share of knowledge-based jobs of any British city.

While national politicians may miss the point on this, it is something that is well understood by Burnley Borough Council. As a result, they have been focussing efforts on expanding the University of Lancashire’s presence in the city, have set out a masterplan for its city centre which goes beyond retail, and where they have been supporting manufacturing firms it has been to help them raise their productivity and the skills of their workforce.  All with the aim of helping its economy to adapt in the face of ongoing changes to the global economy.

Assisting cities to adapt to the constant changes in the global economy should be the goal of government. Sadly too much national policy – the Regional Growth Fund and Enterprise Zones to name but two –  looks to the past, ignores the situation that cities find themselves in, and doesn’t help cities to adapt to the ongoing changes in the world of work.  In many instances, national politicians are more nostalgic than local politicians.

Recent decades have not been kind to Burnley. If it, and other cities like it, are to fire again, they can’t be constrained by nostalgia. They need help to make themselves attractive to tomorrow’s businesses and workers, whatever industry they’re in.

You can see more data for all cities on our data tool.

Productivity
Levelling up Productivity
Labour Party Conference: How do health inequalities impact wellbeing in the workplace?

Future of cities Levelling up Productivity
Realising Regional Growth: What next for Greater Manchester?