Last week Nick Clegg announced the Government’s proposals to improve support for young people not going to university. The announcement follows Jeremy Heywood’s (unpublished) review into youth unemployment, the launch of which many viewed as an implicit admission that the Youth Contract wasn’t working. Despite the Government’s efforts to incentivise employers to recruit young employees, youth unemployment remains stubbornly high. This is a major cause for concern because of the scarring effects spells of unemployment can have on young people over their lifetimes.

The latest set of initiatives focus on providing young people who are out of work and not in education with a clearer route into employment. While we await the detail behind Clegg’s speech, the main measures include:

Clegg also reiterated Osborne’s announcement in the Autumn Statement that 18 to 21 year olds without a level 2 in Maths and English will be required to go on training courses or risk losing their benefits. The government will also pilot work experience placements for those who have been on JSA for six months.

The focus on improving outcomes for those not pursuing traditional academic routes into employment is very welcome. Non-graduates between the age of 21 and 30 are far more likely to be unemployed or disengaged from the labour market than their peers who hold a degree. Graduates are also likely to earn around £200,000 morethan non-graduates over their lifetime. 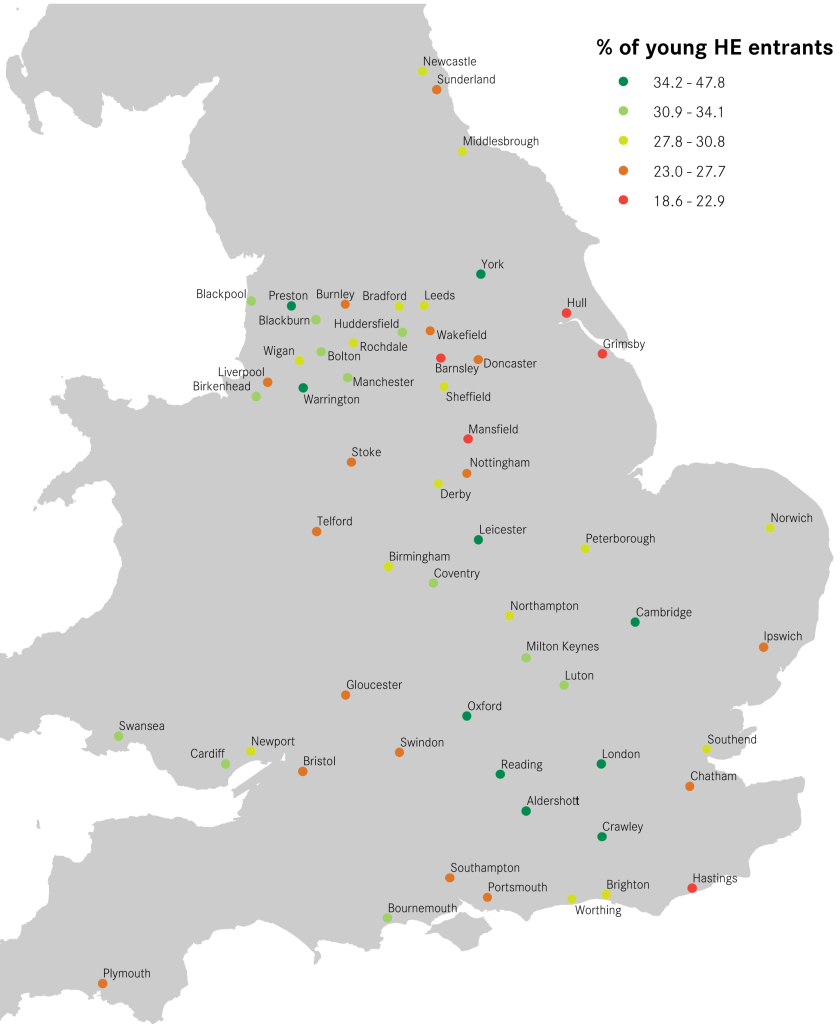 As we found with patterns of GCSE attainment, these trends reinforce economic and social divides across the country. On the whole, cities with fewer young people going to university have higher youth unemployment rates.

Figure 2: Youth unemployment compared to HE participation rates, 2005 to 2011

The difference between the numbers of young people going to university in Cambridge and Hastings equates to a total lifetime earnings differential (based on very rough estimations) of over £220 million.

The government needs to continue to break down the barriers to university for young people living in cities like Hastings. Part of this is about raising educational attainment rates at GCSE and A-level: unsurprisingly, there is a strong correlation between A-Level grades and applications to Cambridge at local authority level, for example.

But with 6 out of 10 young people not going to university, greater focus needs to be put on both the quality and accessibility of alternative routes into employment. Last week’s announcements are a step in the right direction. But key to all of this working is effective partnership and collaboration. Many would argue that the Youth Contract is not as effective as it could have been because in many areas it wasn’t properly integrated into other forms of employment support.

Partnership will be crucial to local authorities’ ability to provide up-to-date, comprehensive information through a UCAS-style portal. It will also be crucial to increasing the availability and quality of vocational education, apprenticeships, traineeships and work placements.

Cities across the UK are actively trying to improve the system. Initiatives to tackle youth unemployment were a key feature of many of the City Deals and cities such as Birmingham have set up youth unemployment commissions. Cities have the ability to innovate, target resources and join up with employers in ways that wouldn’t be possible at the national level. The Government must continue to enable and empower local partnerships if it wants to make real inroads into tackling youth unemployment in this country.