Yesterday’s unprecedented announcement by the Prime Minister on how we need to live our lives over the coming weeks and months will have profound impacts up and down the country. The geography of this will vary depending on the structure of different local economies. This blog looks at three areas where this will play out – self-employment, the ability to work from home, and the rise of remote working.

Self-employed people in the North and Midlands are more likely to be in insecure, lower-paid roles at high risk from economic shocks

The economic impact of Coronavirus on self-employed people has received a lot of attention in recent weeks. And while the Chancellor stepped in to extend Statutory Sick Pay (SSP) to this group and people working on zero-hour contracts, they still stand to lose almost two-thirds of their current earnings.

But while cities in the North and Midlands might have lower rates of self-employment, those who are self-employed in these places are more likely to be in precarious situations. Of all the self-employed people in Burnley and Blackburn, only two in ten also have access to additional income as employees.

In contrast four in ten do in Cambridge. In addition to that, they are also more likely to be in lower-skilled, lower-paid occupations, such as in the hospitality, personal care and transport sectors, meaning they are more vulnerable to economic shocks. 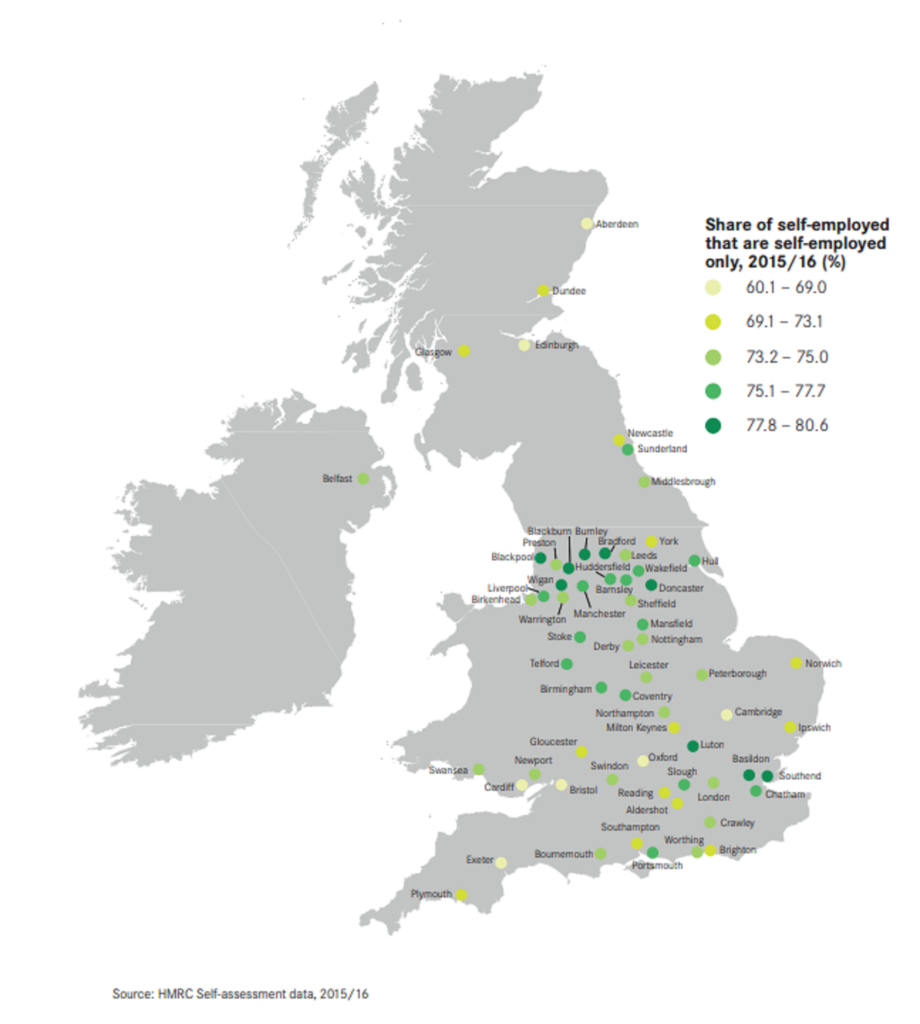 Yesterday the Prime Minister asked those who can work from home to do so. But how likely is this across the country?

The jobs that could be more easily done from home – such as consultants or finance – are concentrated in cities in the Greater South East (see the figure below). Assuming some sectors could completely shift to home working if necessary, up to one in two workers in London could shift to working from home. Meanwhile in Reading, Aldershot and Edinburgh over 40 per cent of workers could too.

On the other hand, less than 20 per cent of all workers in Barnsley, Burnley and Stoke could work from home, suggesting the economies of many northern cities are likely to be hardest hit by a complete lockdown. Manchester, Leeds, Warrington and Newcastle are the exceptions as they have a higher share of jobs that could shift to home-working, reflecting the slightly different structure of their economies compared to other northern cities. 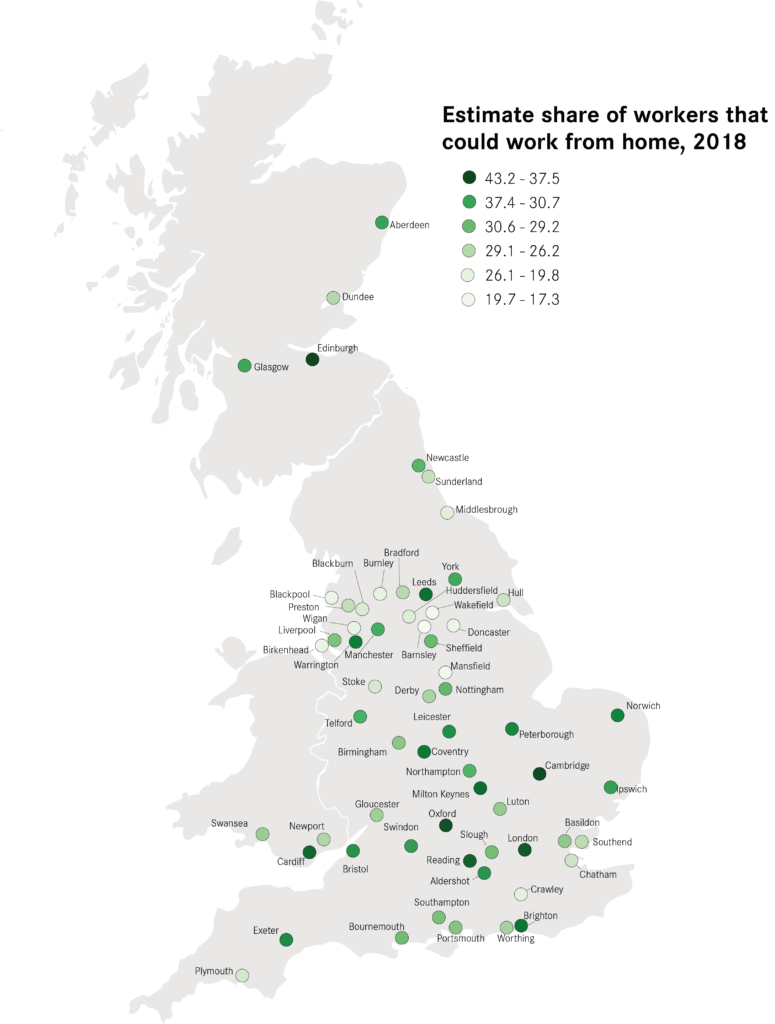 Estimate of workers that could work from home 2018

Once Coronavirus has peaked, face-to-face interaction will continue to be more important than ever

The arrival of Coronavirus has sparked debate in the comment sections of newspapers about the benefits of home working.

This is nothing new. In the late nineties the death of distance was declared by many because of internet-driven improvements in communications. And yet, despite their further advancement since, jobs (particularly high-skilled ones) have continued to cluster in cities.

This is because of the benefits that cities offer – such as face-to-face interaction. While this might seem intangible, no doubt many readers who have been grappling with trying to communicate with colleagues working from home in recent days will now be all too aware of the benefits of being in the same room as their team. So, while technology no doubt makes this strange period a little easier than it would otherwise have been, by the end of it we are likely to be reminded of the value of face-to-face meetings to help us get things done.

Levelling up Productivity
Is GDP a good measure of wellbeing at the local level?
Future of cities Housing
England needs either tougher housing targets or planning reform – it is one or the other