Given the wide recognition of its importance to individuals’ future education and career prospects, and to the UK’s global competitiveness, it’s not surprising that education ranks as one of the most important issues for voters in the 2015 General Election. But we also know that attainment and school performance vary enormously between cities, threatening to reinforce patterns of economic disadvantage.

As they prepare their manifestos, all of the major political parties have made a number of statements on educational reform, including issues related to the overall schools budget, teaching standards, curriculum development, funding for disadvantaged pupils, and inspection.

While the majority of these proposals are not overtly spatially sensitive in nature, their impact will vary between cities. Take the Conservatives’ flagship policy for improving schools – academy conversion. If the Conservatives focus this on schools that are judged by OFTSED to be ‘inadequate’ or ‘requiring improvement’, then we would expect more academy conversions in Barnsley than York, where there are three times as many schools falling into these categories.

The same applies with the Liberal Democrats’ proposed increase of the pupil premium: 49 per cent of pupils in Middlesbrough are eligible for the pupil premium, compared to just 19 per cent in Warrington. And if Labour were to reintroduce the Educational Maintenance Allowance (EMA), that would likely affect more pupils in Hull, where previously one in seven received payments, than in Milton Keynes, where take-up was just one in 14.

The big question is whether any of these proposals go far enough to address the persistent disparities in educational outcomes between cities. In York, 19 pupils out of a class of 30 achieved five or more A* to C grades, including in Maths and English, in 2014. In Barnsley, this dropped to 14 pupils out of a class of 30. These divides reinforce patterns of economic disadvantage across the country, as pupils in struggling cities are more likely to attend underperforming schools and fall further behind their peers. This has implications for these young people’s employment prospects, as well as the wider economy. 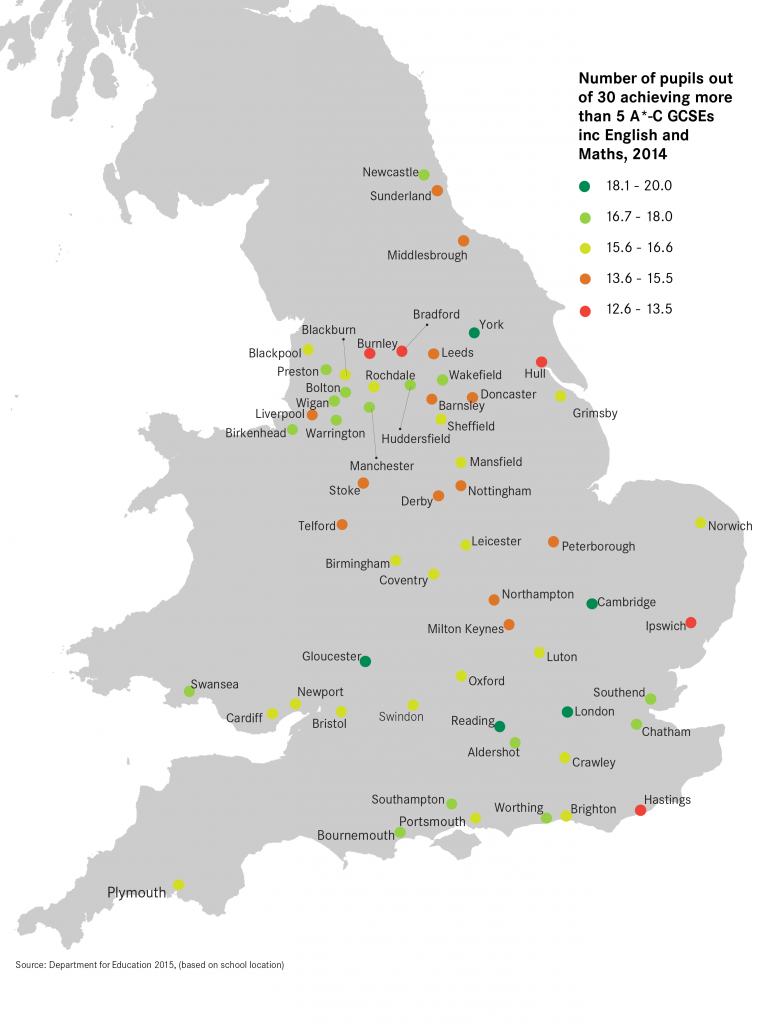 Evaluations indicate that proposals to increase the number of academies, raise the pupil premium, and re-introduce the EMA can all lead to some level of improvement in educational attainment – although none are without their controversies, and the benefits take time to materialise. There are also echoes of the previous Labour Government’s ‘London Challenge’ in some of the policies – including former Education Secretary David Blunkett’s local Directors of Schools Standards proposal, and the Conservatives’ academy sponsorship plan – which focus on building partnerships, ‘best practice’ sharing and targeted support for failing schools. While it’s now clear that London Challenge was not as significant in turning around London’s secondary schools as previously thought, there are still signs it did have a positive effect, and thus some of the themes it promoted perhaps warrant further exploration in future policy-making.

There’s clearly no single solution to the UK’s educational disparities, and it is helpful to consider policies as complementary rather than in competition with one another. There may also be other aspects of public policy outside the realm of education that could help to support increased educational attainment. What is clear is that we will never help to close the gap between Barnsley and York, or Hull and Milton Keynes, without ensuring that solutions are tailored to the particular needs, strengths and weaknesses of different cities.