The city centre is re-emerging as the preferred location for office space, away from out-of-town locations and business parks.

The 1980s and 1990s saw the rise of the business park, offering large floorplates and vast amounts of car parking space. However, Centre for Cities research in 2011 suggests that there has been a shift back towards the city centre as a preferred location for offices, and particularly for higher skilled jobs. Employers located in city centres benefit from proximity, as well as finding it easier to attract and retain employees.

Offering a range of modern office space within mixed-use areas, which include other amenities such as restaurants, shops and gyms and are well served by public transport, is likely to become ever more important as high skilled jobs and businesses increasingly concentrate within city centres. It also supports city centres to become more diverse, as over-reliance on the retail sector is not good for long term growth.

Making the Grade highlights this shift and shows how Cambridge appears to be responding to the challenge of the increased attractiveness of the city centre.

The city’s response to increasing requests from businesses to be located close to historic centre, which has limited site availability, has been to prioritise new development to the east. This means that the existing railway station will now sit at the heart of an expanded commercial and residential area; a move that has attracted Microsoft to relocate from its out-of-town site.

The fast rail links from Cambridge to London Kings Cross, combined with a large amount of land available for development within a ‘new’ city centre, provides an excellent base for one of the UK’s top performing cities to build on its success and drive economic growth. 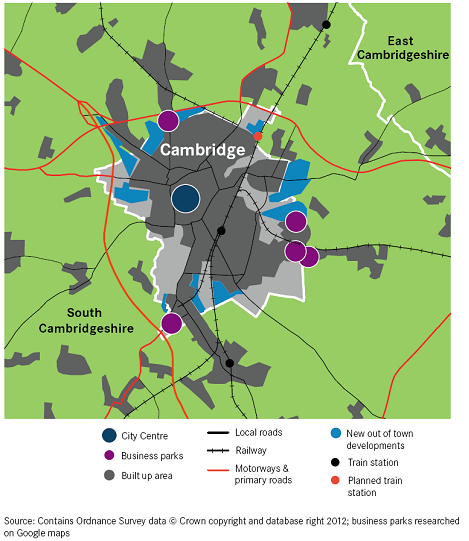