‘Only connect!’ said E.M. Forster. He might not have been talking about broadband policy – more fool him – but the point still stands. Good digital infrastructure is crucial for our future cities, to keep up with the inevitable digital trajectory of businesses and public services. Broadband (whether superfast or not) will be a key part of this infrastructure.

We’ve seen some positive commitment from both national government and cities on the issue of broadband recently. On 1 April, the DCMS SuperConnected Cities Programme, which had been due to come to a close, was expanded. The scheme, which uses a pot of £150m to provide vouchers to SMEs in partner cities to cover connection costs for superfast broadband, has been extended from 22 to 50 cities. So far, over 14,000 SMEs in the UK have received grants, and its extension will allow businesses in cities including Sheffield, Ipswich and Sunderland to benefit.

Separately, cities have also developed their own schemes to support broadband provision. Coventry, for example, signed a deal with a fibre infrastructure provider to invest in and upgrade the city’s broadband, and Nottingham expressed an intention to invest in high-speed broadband as part of a possible devolution deal for the city.

Fantastic! We might say. What’s to lose? Only that broadband provision (through fibre and cables) and adoption (by businesses and homes) requires significant investment. And while we might assume that it would have a positive economic impact, that’s not necessarily the case. If we look at the top 10 UK cities for superfast broadband connectivity (measured as 30 MB/S), there’s no particular relationship between their connectivity and their overall economic performance – and some of the UK’s strongest city economies (Cambridge, Milton Keynes, Oxford, for example) are nowhere to be seen. Helpfully, the What Works Centre on Local Economic Growth has produced a review of the impact of broadband to explore the evidence in more detail. It shows that provision is varied and complex – and it might be worth looking before you leap.

One crucial insight that came out of the review is that broadband has a more significant effect in cities than in rural areas. The national economy is not flat, but spiky – our jobs, services and populations are increasingly concentrated in cities. The intensity of the effects of broadband provision demonstrates the case for focusing investment within cities as a priority.

But as is often the case, the effects will vary across cities. They also vary between different types of business, and types of workers. And not all the effects will be positive, so national and local policymakers will need to take a considered approach.

Firstly, broadband creates both winners and losers. It might make some businesses more productive, but others may lose staff or go out of business. The acceleration of automation will penalise lower skilled workers over higher skilled ones, and in places with low skill levels overall, this may have negative impacts on welfare and employment levels. Among the 10 UK cities with the lowest penetration of superfast broadband, six also fall into the bottom 20 cities for no formal qualifications. Although there might be a temptation to drive economic growth in these places through investment in broadband, without the complementary investment in skills and employment, this negative impact may in fact outweigh the benefits.

And secondly, the provision of broadband does not necessarily result in its adoption, which requires behavioural as well as infrastructural change. While the SuperConnected Cities scheme openly addresses adoption, it has faced issues with slow take-up from businesses in the past, indicating that this remains a challenge. Firms need to be able to clearly see the benefit and be able to make the most of it in order to further the adoption of broadband.

And digital inclusion needs to extend to citizens, as well as to businesses. While broadband seems to have positive local economic impacts, some of these might be derived from in-migration from the area, rather than reflecting positive effects on existing residents. Policy should be looking actively at digital inclusion, both in skills and in broadband adoption in homes and public places, to allow the benefits of broadband to penetrate across the social spectrum, rather than just among new arrivals to the area.

Ultimately, broadband provision is not a silver bullet for local economic growth. Broadband can improve firm productivity, but it can also have negative as well as positive effects on numbers of businesses, employment, income and wages. Policies such as SuperConnected Cities can only have value in pushing forwards on economic growth if they are seen as part of the overall economic strategy for cities. 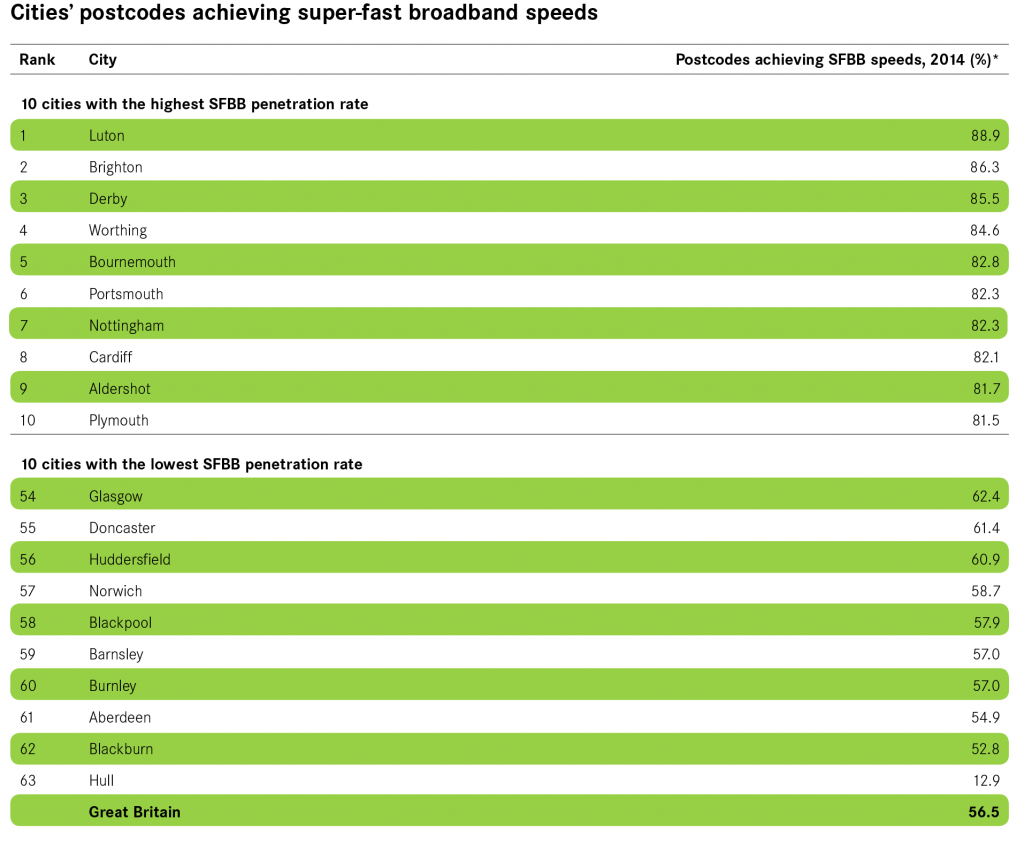