This section examines the policy context in US cities relative to the UK. Collaborative working in the field of youth employment support has taken a variety of forms in US cities in part due to the role of the state relative to other actors and comparatively high levels of city autonomy. The redistributive function of US government spending and relatively low levels of spending on welfare in the US means that private citizens and philanthropic organisations play a more significant role in funding workforce development or employment support activities. US cities have greater fiscal autonomy compared to UK cities giving them greater flexibility and more room to innovate. In addition, the blend of public and private funding available allows cities to plug gaps in provision and experiment with new ways of working.

The role of the state vs other actors

While overall levels of tax are similar, the US tax system is less progressive. Tax brackets in the US are higher among lower income groups and lower among higher income groups relative to the UK meaning that it is less redistributive. The structure of government spending also varies with the UK spending more on welfare. Social protection represented nearly 37 per cent of general government expenditure in the UK in 2011, compared to 21.3 per cent in the US.13 The US government instead spends significantly more than the UK on defence, economic affairs and health.

Evidence suggests that public provision of welfare in the UK crowds out private charitable giving.14 As private citizens, Americans appear to give more of their time and money to the poor than the British.14 The relative absence of a welfare state in the US coupled with high levels of inequality means that a higher proportion of individuals in the US fall below the poverty line and disposable income among the lowest income groups is particularly low – or in other words “the poor are really poor in the US”.

Foundations and other types of philanthropic organisations are also becoming increasingly active in the fields of economic and workforce development in the US (22 per cent of philanthropic funds are spent on education and 16 per cent on human services), and they have a presence in cities across the US. The Kresge Foundation headquartered in Detroit, for example, made grants worth $134million (£87million) in 2013.17 The Foundation has been funding organisations in Detroit since 1924 and in 2011 it provided grants as part of the Re-Imagining Detroit framework totalling $25.5million (£17 million).

The Community Re-investment Act (CRA) means that financial organisations also invest significant amounts in cities. The Act passed in 1977 is designed to reduce discriminatory lending practices in low-income neighbourhoods. Banking institutions are examined for CRA compliance by federal regulatory agencies and this is taken into account when approving applications for new bank branches or mergers and acquisitions. While it is not without controversies, the CRA has increased lending to low-income communities and led to investment in housing, community facilities and economic development.18

The UK government is projected to spend at rates closer to the US government by 2020, 36.4 per cent of GDP compared to 35.4 per cent in the US.12 Existing and planned austerity measures in the UK mean that cities will increasingly need to look to sources of alternative revenue, as many US cities already do, to fund local initiatives.

US cities have a higher degree of fiscal autonomy than UK cities, as measured by their reliance on locally raised taxes in comparison to intergovernmental transfers. New York, for example, raises 69.1 per cent of its revenue from local taxes compared to 26.2 per cent in London.20 Local tax systems are constrained through tax and expenditure limits in the majority of states.21 New York, for example, has to get approval from New York State to levy new taxes, which has also introduced a new capping law for property taxes. Yet, UK cities are in general far more reliant on intergovernmental transfers that often have to be spent on specific functions: on average locally raised taxes, fees and charges account for 71 per cent of municipalities’ revenue in the US21 compared to 25 per cent for local authorities in the UK.23 Greater fiscal autonomy means that US cities have the option to raise additional revenues if required (although this needs to be balanced against potential disincentives for businesses and residents) and more flexibility to respond to local priorities and circumstances.

Federal and state policy, nevertheless, does impact on the way that public services are delivered in US cities. Most agencies that administer programmes are guided by federal legislation and reliant upon money appropriated by Congress on an annual basis. Legislation defines what agencies can offer through programmes, and the amount of funding heavily impacts upon the scope of workforce efforts in cities.24 Over half (51.6 per cent) of New York City’s funding for public workforce development and adult education programmes, for example, comes from federal government and a further 12.2 per cent from New York State.25 Approximately 16 per cent of total funding comes from the federal Workforce Investment Act (WIA)26 – the main federal programme focused on increasing employment, retention and earnings through workforce investment activities – which has specific targets and eligibility requirements attached.

WIA and other federal programme funding are part of a much broader set of resources and programmes that enable cities to provide education, training and employment services. A third of total funding for New York City’s workforce programmes in 2014 came from local dollars and around 2.6 per cent ($13million) from the private philanthropic sector. Private companies also fund City workforce investment programmes. Citibank, for example, donated $1 million to New York City to fund 700 internships in the city.29 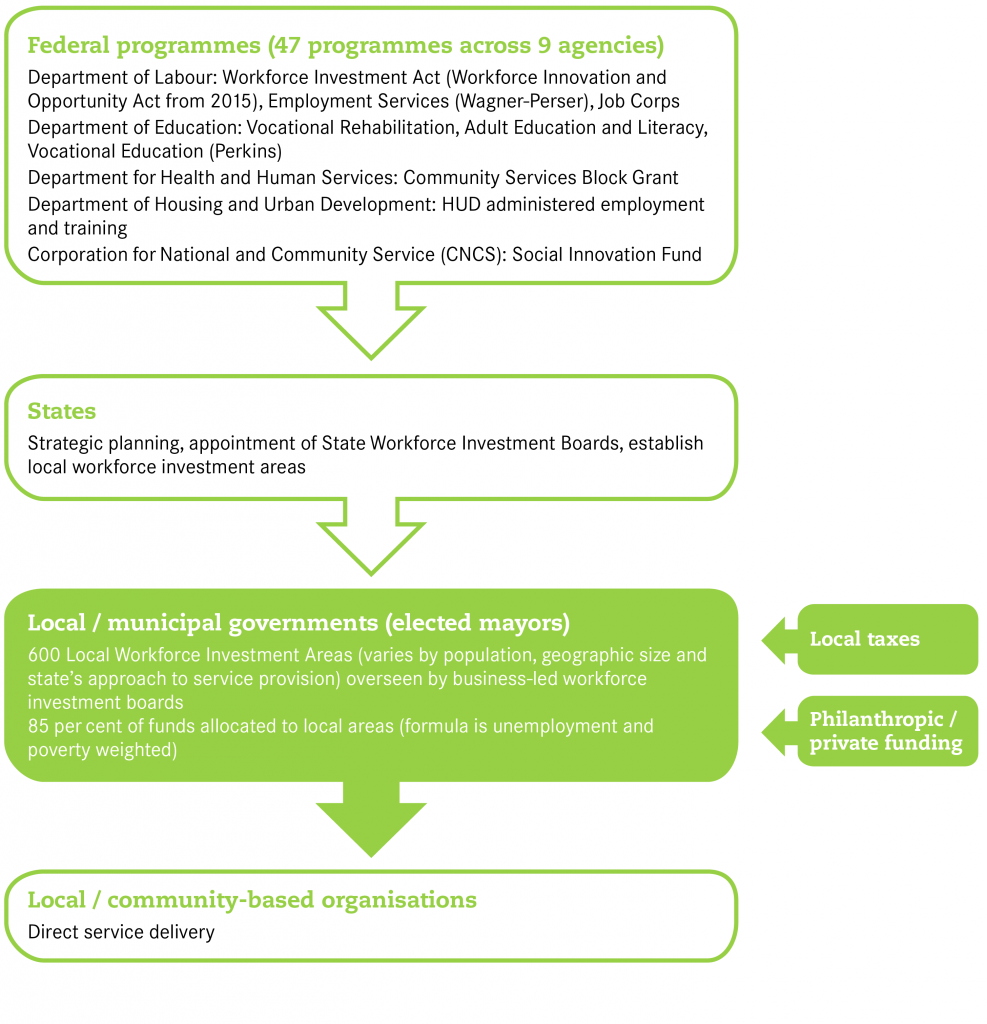 There are also a number of city-based programmes that are not publicly run or funded and in this regard, cities have become more reliant on ‘philanthropic dollars’ as Federal funds for workforce development have been cut back. Over the last ten years in New York City, there has been a 250 per cent increase in investment in workforce development from foundations. Meanwhile, total WIA allocations to New York City have declined by 27 per cent. The New York City’s WIA allocation for youth services totalled $22.5 million (£14.6 million) in 2014. To put this in perspective, New York City Workforce Funders, a group of about 40 foundations, invested nearly $29 million31 (£19 million) in direct youth services in 2013.32 One interviewee described philanthropic organisations as “the mortar between bricks that holds a building together”.29

The blend of national and local, public and private dollars gives cities greater flexibility and room to innovate, as well as plugging gaps in federal funding. Cities and community-based organisations responsible for direct service delivery may, for example, choose to serve a wider group of young people using other funding streams. For example, Opportunities for a Better Tomorrow, a Brooklyn-based CBO, receives 65 per cent of its funding from private foundations or individual donors and serves a wide range of disadvantaged youth and adults.29

While local funding provides flexibility and room for innovation, it means that some cities have far less funding than others. Cities like Detroit and Baltimore suffer from a lack of overall funding for youth services due to limited revenue from local property taxes. As one interviewee in Baltimore stated, “everything we do we could take to scale…and there are parts of the city that we know we’re not funding”.29 The reliance on charitable giving and philanthropic organisations may further reinforce inequalities between cities as more economically buoyant cities, such as New York and Boston, have a higher concentration of philanthropic organisations. It can also be a challenge for cities to establish funder-neutral initiatives as opposed to funder-driven ones.29

Funding variations are in part a consequence of the economic variations between US cities, serving as a reminder that supply-side interventions alone are not sufficient to improve young people’s employment prospects. Cities such as Detroit that have struggled to adapt from a significant loss of industry are characterised by a lack of jobs, while cities like Boston with strong and growing economies have a shortage of skills.

The lack of jobs and quality of jobs, along with the bifurcation of the labour market, create significant barriers in many US cities – as in the UK. The Job Opportunities Task Force in Baltimore, for example, has turned down funding to expand one of their courses in the past as there were not enough jobs in the city to place participants.29 Concerns have also been raised about the quality of work experience placements offered through Summer Jobs schemes: “it’s good at getting young people off the street but it’s not great in terms of real work experience. Kids are often doing very low-skilled jobs”.29 Local actors are increasingly looking at ways to stimulate employer-demand as a result.

City systems for youth employment support are also characterised by fragmentation. As one interviewee put it, “there isn’t really a system in place for dropouts or ‘Opportunity Youth’; it’s probably more accurately described as a series of programmes”. Local partners are often frustrated by the silos that operate between city-government departments. In New York, for example, the Administration for Children’s Services pulled a contract which resulted in a CBO having to close but the Department for Youth and Community Development (DYCD) which funds the same organisation knew nothing about it. There can also be significant divides between city governments and WIBs, and there are numerous examples of foundations working in isolation.

How does the context vary from UK cities?