All cities have been affected by rising youth unemployment during the recession, but young people have long struggled to make successful transitions from school to work. The most successful youth employment initiatives are those that tackle the multiple and diverse challenges that young people often face, while also responding to the needs of employers. This requires collaboration and coordination between multiple cross-sector organisations. Cities have a central role to play in bringing these partners together, as there will be greater proximity between them and they are likely to face shared challenges.

With youth unemployment recently reaching all-time highs and in anticipation of further austerity measures in the UK, this report explores collaborative youth employment initiatives in seven US cities with distinctive labour market challenges to identify the factors that lead to effective intervention.

Youth employment in the UK and US 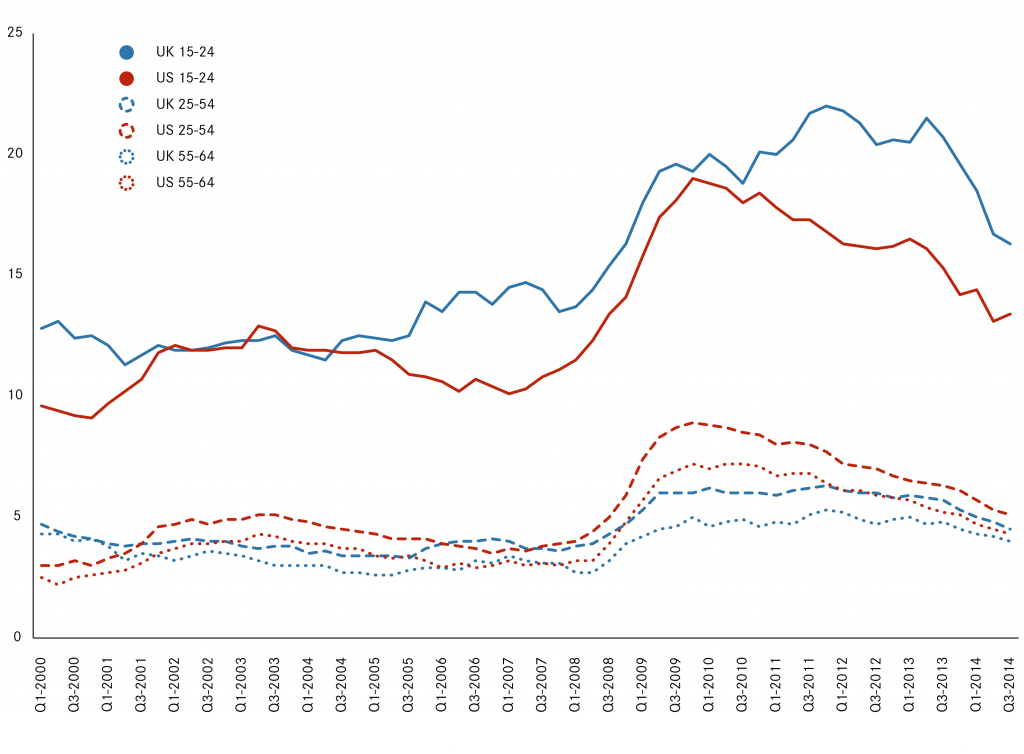 Early success in the labour market, in terms of steady employment and wages, is vital for an individual’s lifetime prospects of steady work and adequate earning power. For many US cities the budgetary and social consequences of long-term disconnection – “in costs for foregone income tax revenues, corrections, shelter system and social services, and less functional, coherent, safe and stable communities”6 – justify specific focus on young people.

High levels of youth unemployment and inactivity pre-date the recession in the UK and US, indicating that the root cause goes beyond the financial crisis. Young people often face multiple barriers to finding and staying in work, ranging from a fall in jobs available due to the recession to long running issues such as skills mismatch. There is a misalignment between employers in need of skilled entry-level talent and young people in need of employment opportunities: 45 per cent of employers in the US cite lack of skills is the main reason for entry-level vacancies, while 6.7 million out-of-school and out-of-work 16- to 24-year-olds struggle to connect to employment.7 Lack of work experience, social or behavioural constraints, and low awareness of support available can also act as significant barriers.

Evidence highlights the importance of early intervention, integrated work-based learning opportunities, multiple and high-quality routes into employment, tailored and continuous support, opportunities to reengage young people and demand-side interventions (to influence employer decisions and behaviour) if youth unemployment is to be lowered over the long term.8 Programmes need to have the flexibility to respond to the diversity of needs (and talents) of young people. Some young people are more ‘job ready’ and only require ‘light touch’ services while others may require more intensive support.9

All of these interventions require some form of collaboration, and engagement with employers, to be effective. This implies a central role for local partners given their ability to engage with employers and other stakeholders, and work in close collaboration due to their proximity and shared challenges. Yet in many cities, systems of youth workforce development and employment support are fractured. Too many organisations work in isolation from one another leading to duplication and the inefficient allocation of resources. It also means that young people face difficulty in accessing services.

Rising levels of youth unemployment and under-employment coupled with public spending cuts mean that local policymakers and practitioners are increasingly looking at ways to collaborate to achieve better outcomes. This has taken a variety of forms in US cities in part due to comparatively high levels of city autonomy and the role of the state relative to other actors (discussed in more detail in the next section). In a number of cities, partnership working has progressed to take the form of ‘collective impact’, which brings together actors from multiple sectors in a highly structured way to affect significant social change. To date, there are limited examples of collective impact in the UK. In the field of youth employment, Talent Match, established in 2014 and supported by the Big Lottery Fund for five years, is one of the most significant step changes towards greater cross-sector working with voluntary and community organisations at the forefront.10

Lessons from US cities – this report

This report aims to build understanding of the most effective ways to work in partnership at city level to improve employment outcomes for young people. The successes of the initiatives detailed in this report are all reliant on different forms of collaboration in order to deliver their goals. Through a series of in-depth interviews with more than 150 city and national policymakers and practitioners in nine US cities11 – New York, Philadelphia, Boston, Pittsburgh, Cleveland, Detroit, Chicago, Washington and Baltimore – during September and October 2014, it explores how partnerships were established, the incentives and broader enabling factors for collaboration, the challenges faced and how these have been overcome.

The next section examines the underlying policy context for responses to youth unemployment at city-level in the US, with comparison to the UK. The second section explores how and why partners in different US cities are working in partnership and what factors lead to effective collaboration. The final section sets out a series of recommendations for local partners and the UK government based on the lessons learnt from US cities.