Much of the discussion to date on the differing productivity of businesses have focused on two things – the idea that the diffusion of ideas from leader firms to other businesses, which would boost their productivity, has slowed, and that varying management practices also influence performance. There is truth in both of these theories. But they don’t explain all of the variation that is seen across the country.

Not all export activities are the same. Some are high-skilled, such as research positions in pharmaceuticals or smartphone app designing. And some are lower-skilled, such as call centres and more routine manufacturing activities.

Because they aren’t tied to any particular market (unlike local services, which by definition sell to a local market), exporters have greater freedom as to where they locate. Where different exporting activities actually locate depends on the benefits that different places offer.

These location decisions are shaped by a process known as agglomeration. Cities offer three key advantages to business over non-urban areas, which in theory should make them more productive:

For many businesses, particularly more highly-skilled service businesses (which tend to be more productive), the benefits of a city location outweigh the costs because the access to workers and knowledge that cities offer make them more productive. For this reason, we see a number of these businesses clustering within city centres in particular, with 25 per cent of England and Wales’ high-knowledge
service exporter jobs being based in a city centre in 2011, despite these central locations accounting for just 0.1 per cent of all land.

Box 4: The attraction of non-urban locations in the Greater South East

Not all high-skilled businesses look for a city location – the opportunity to share ideas is not likely to appeal for companies that have commercially sensitive information, such as pharmaceuticals companies. But access to skilled workers is still important, and explains the appeal of non-urban locations in the Greater South East to higher skilled activities. For example, while this area accounted for 22 per cent of all jobs in Britain in 2016, it hosts 40 per cent of all of Britain’s positions in research and experimental development on natural sciences and engineering. That 44 per cent of people in the Greater South East had a degree in 2017, compared to 35 per cent elsewhere in Britain, is likely to be a strong factor in this.

However, not all cities offer these benefits to the same extent, resulting in the variation in city performance shown above. This leads to very different profile of exporters across the country.

Higher-skilled exporters tend to be more prevalent in cities in the Greater South East. This is because these cities offer access to a large number of skilled workers and a network of other highly–skilled businesses. And their location decisions suggest that they are willing to pay a premium to have access to these benefits because of the higher commercial rents in these cities.

Lower-skilled exporters tend to be based elsewhere in the country. The more-routine nature of their work means that they require access to lots of lower skilled workers and in many cases, because of the size of their operations, access to large areas of cheaper land or commercial space. Many cities elsewhere in Britain offer both of these benefits, which results in a sorting of exporting businesses according to the skill levels of their activities across them (see
Figure 11).

Examples of this can be seen even within the same company – Amazon and ASOS have their headquarters in London but distribution sites elsewhere, while Barclays does its investment banking in Canary Wharf but its call centre activities in Sunderland. Box 5 looks at the benefits that the earlier case studies of Reading, Bristol, Sheffield and Hull offer businesses.

Figure 11: High-skilled occupations share of all jobs in exporters, 2011 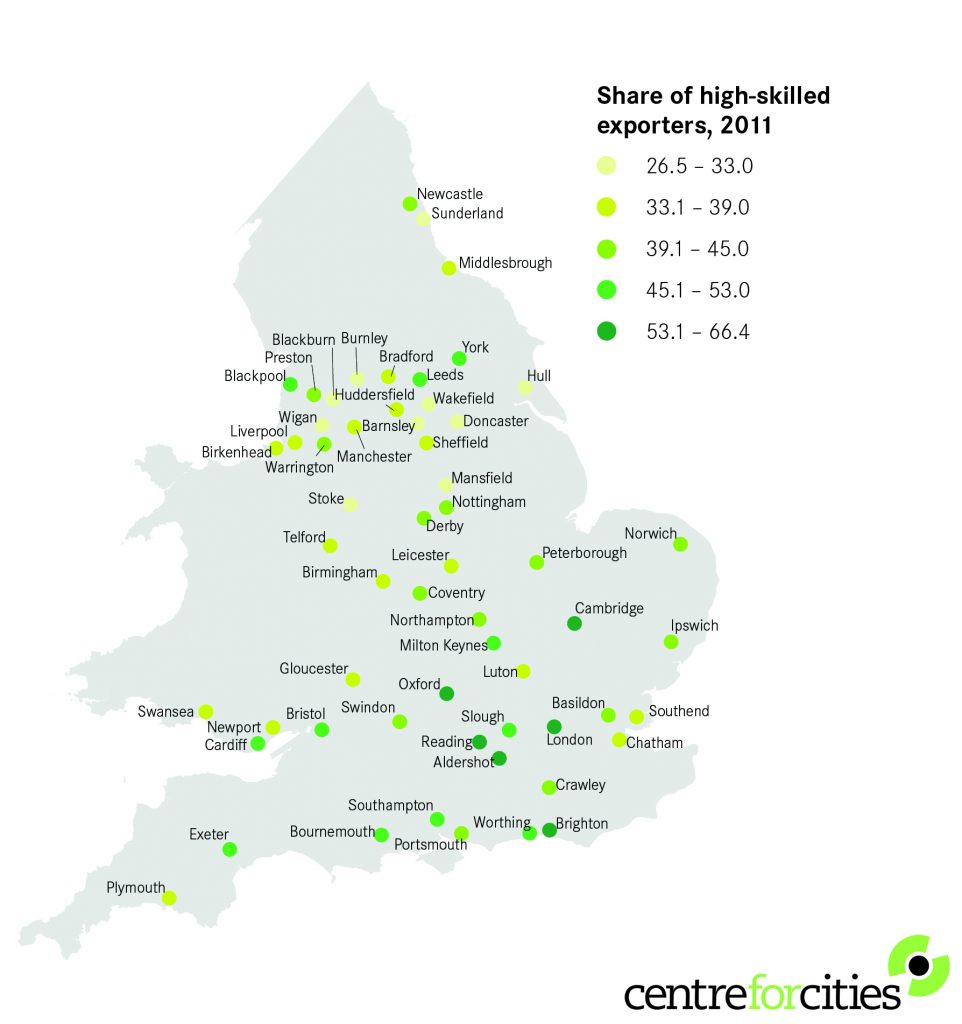 The implication is that the lower productivity of many cities outside of the Greater South East is a result of the type of exporters they have been able to attract to or grow in their economies, rather than the underperformance of existing businesses. This has implications for the idea that to improve productivity, policy needs to better facilitate the diffusion of new innovations and ways of working from leaders to laggards. The reality is that any innovation made in investment banking, for example, is unlikely to have any relevance to a call centre handling personal banking queries.

A similar critique holds of management practices. Work by the Bank of England shows that foreign-owned companies are more productive than domestic companies, with one reason for this being that management practises are stronger amongst foreign companies. But as Figure 13 shows, the distribution of productivity amongst foreign-owned companies reflects the patterns seen for all companies, which again results from the nature of foreign investment that different places are able to attract due to the benefits they offer. This again is seen even within companies. Nissan is well known for its ‘kaizen’ form of management, which seeks continuous improvement to its processes. But the nature of the work it undertakes differs across its sites, assembling its cars in Sunderland (which is more routine in its nature), but designing and engineering them in the Greater South East – the former is done in London and the latter in Cranfield in Oxfordshire. The design and engineering processes add much more value to its products, and so are more productive, than assembly.

Box 5: The relative advantages of Reading, Hull, Bristol and Sheffield

The ability of Reading, Bristol, Sheffield and Hull to attract business investment (either from within their own business base or from elsewhere) rests mainly on the specific benefits that they can offer businesses. Figure 12 sets out how the four compare. It shows that what Reading and Bristol offer is access to knowledge – both in terms of high-skilled workers and a more dense city centre (as well as easier access to London), but this comes at a cost. What Hull and Sheffield offer to a much greater extent is access to a lot of lower-skilled workers and much cheaper land. Reading and Bristol’s offer therefore holds greater appeal to higher-skilled economic activity that requires access to knowledge, while Hull in particular appeals more to lower-skilled activities that don’t need access to knowledge, instead looking for a low cost location.

Figure 12: The benefits of Reading, Hull, Bristol and Sheffield 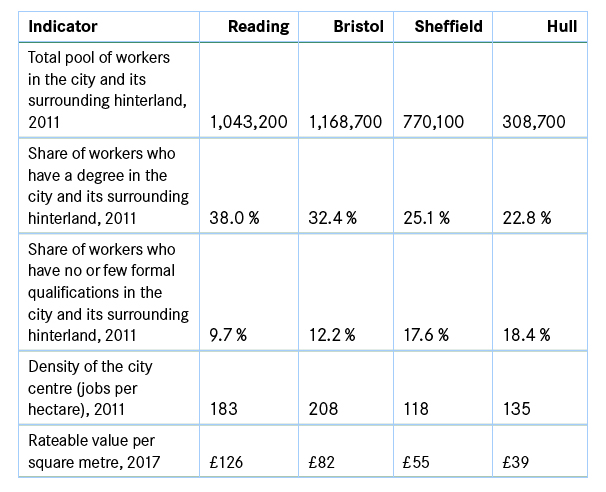 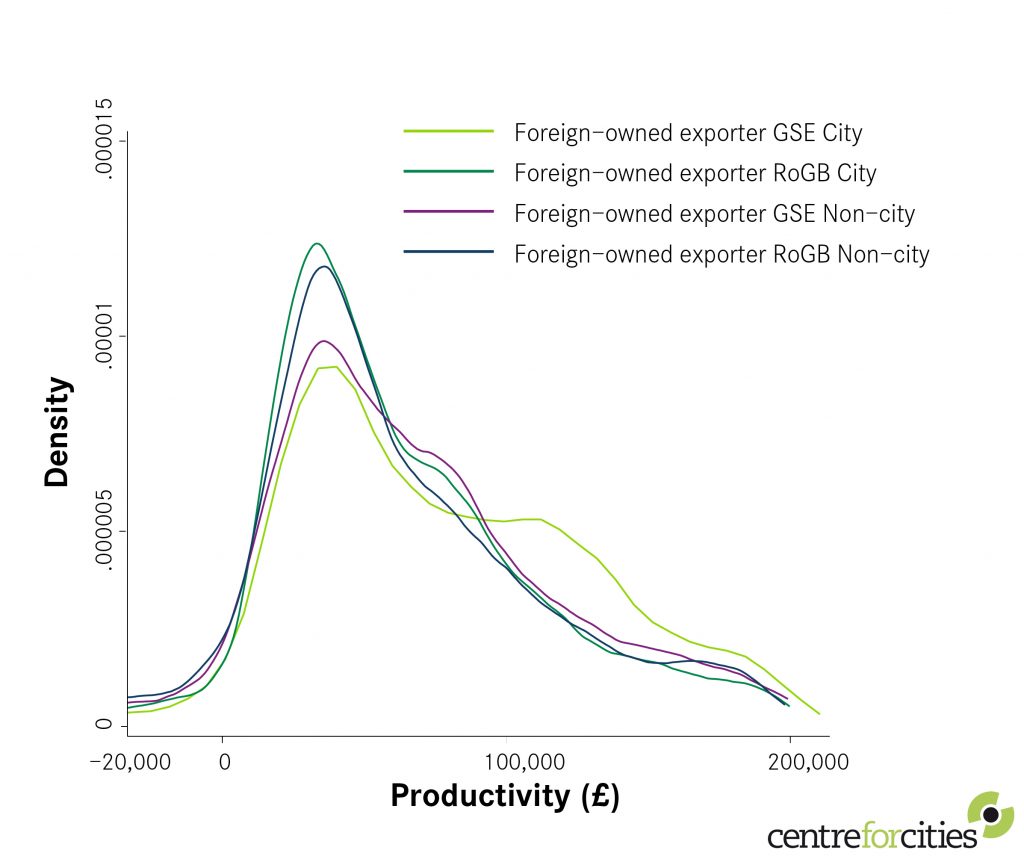 Improving management practices or the ability for businesses to make use of new innovations will of course have an impact on their productivity – Nissan’s car assembly is likely to be more productive than neighbouring manufacturers, which could learn from its practices. But making a lower skilled exporter more productive through such interventions will not have the required change in productivity in places that are lagging on its own. The added challenge is to improve the ability of struggling cities to attract and support the growth of higher-skilled exporters. And this will require an improvement in the fundamental benefits that places offer to potential investors, particularly around skills of
the workforce.