04Will there be any benefits from a fall in migration numbers?

Will there be more jobs for UK workers?

The growing importance of EU workers in the labour market has led many to argue that this has had a damping effect on wages and crowded out British workers, particularly when it comes to low-skilled jobs. This suggests that a fall in the number of people coming from the rest of the EU will bring benefits to UK workers in terms of more jobs and better wages.

But the evidence on this damping effect suggests migration has not had a negative impact on employment and that any negative impacts on low-skilled workers have been small.25 In 2016, net migration was 248,00026 but the number of jobs has increased by 486,000 between 2015 and 2016, suggesting that workers are not competing over a fixed number of jobs. As discussed earlier, migrants also increase demand for jobs through the consumption of goods and services in the local economy, and the impact they have on innovation and productivity.

The rate of jobs growth varied across occupation types as shown in Figure 10. While the number of high-skilled jobs in England and Wales grew by 27 per cent between the 2004 EU accession27 and 2016, the number of low and medium-skilled jobs has remained almost the same. This suggests that the real pressures on access to low-skilled jobs are coming from structural changes, such as technology and globalisation, and the transition towards a knowledge-based economy, rather than the influx of workers coming from abroad.

In addition, growth across different types of occupation has been uneven and does not have a strong relationship with the number of people coming from the EU at a city level. For example, Peterborough, the city with the second highest share of EU residents (10 per cent) has experienced the highest growth in low-skilled jobs from 2004 to 2016. In contrast, in places with a lower share of EU residents such as Hull (4 per cent) and Middlesbrough (1 per cent), the number of low-skilled jobs fell by around 20 per cent over the same period.

Will it ease the pressures on public services and housing?

The other argument often raised in favour of reducing migration is that it puts pressure on public services. This argument suggests that a fall in migration numbers will ease the pressures on hospitals, schools and housing. The lack of data on users of public services by nationality makes it hard to accurately identify these impacts, particularly at the local level. But studies show that EU migrants pay more than they receive in welfare payments, suggesting that funding for public services delivery will suffer if there is a reduction in international migration.28

Looking at the health profile of residents cities in England and Wales, EU residents are less likely to suffer from long-term illness, which together with their age profile suggests that they are less likely to rely on the NHS compared to the native population. For example, in Liverpool, 8 per cent of the UK-born population had a long-term illness, whereas this was only 2 per cent of the EU-born population.

But given their younger age, this group of people is more likely to start a family and this might be putting pressure on the number of school places.

And as shown in Figure 11, there does not seem to be a clear relationship between the share of foreign-born residents and welfare spend per capita in a city. If anything, places with a higher share of the foreign-born population tend to spend less on welfare.

Figure 11: Relationship between welfare spend per capita (2010) and EU share of city population (2011) 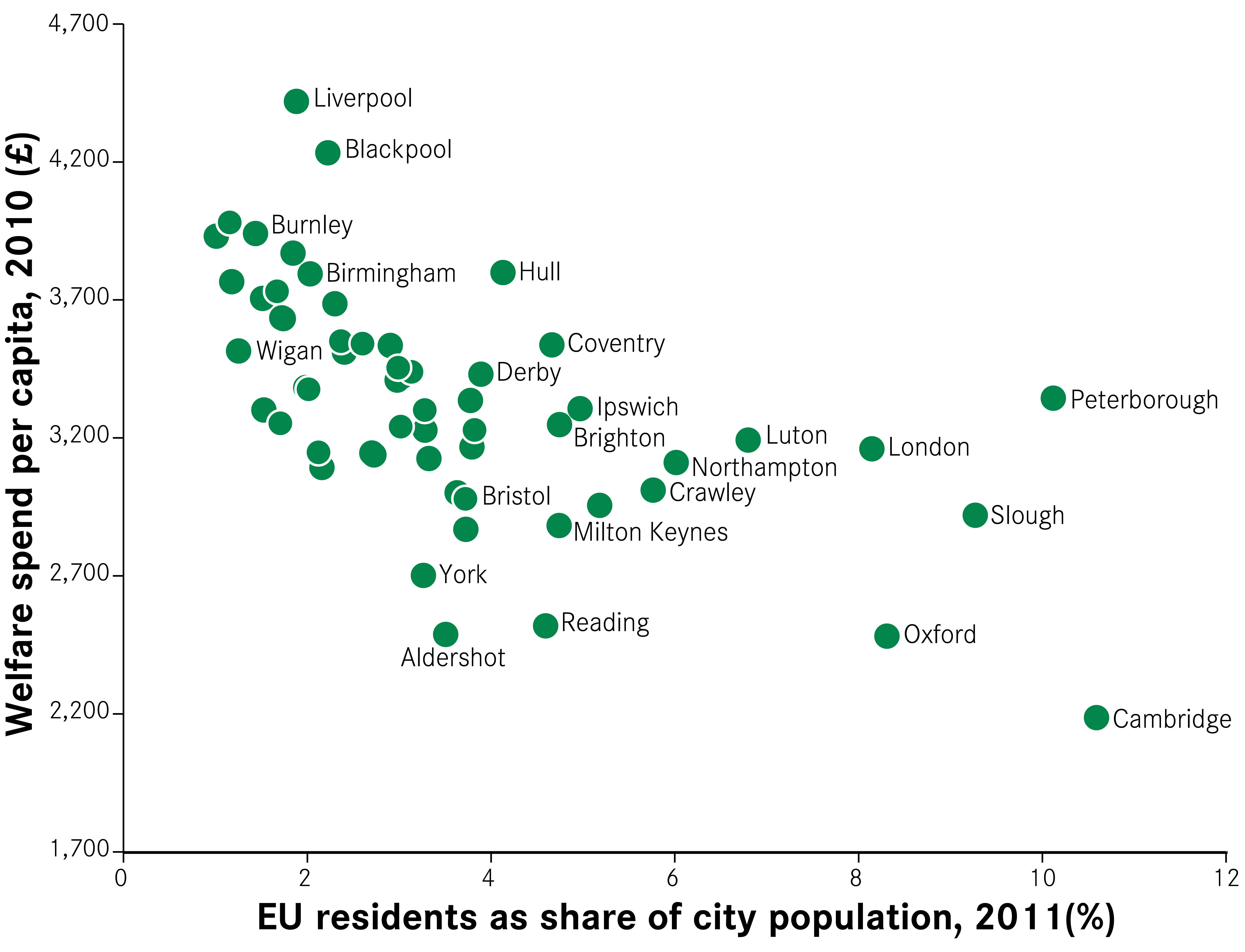 Migrants play a crucial role in the delivery of public services, working as teachers, doctors or nurses. In 2011, EU workers accounted for 4 per cent of all jobs in education and for 3 per cent of those in health in England and Wales. In Cambridge, Cardiff and Oxford, the figures for education are considerably higher (around 10 per cent), reflecting the role that the universities play in these economies and their reliance on international talent. More recent data shows that roughly one in 10 NHS workers in London is from the EU (compared to 5 per cent nationally).29 This means that public services in some cities will be more negatively affected by migration changes.

This is not to say that inflows of people do not put any pressures on communities. For example, Figure 12 shows that some of the most successful places like London, Cambridge and Oxford have a higher share of EU residents and they also tend to have higher house prices on average. However, this may be due to the fact that these places are located in the Greater South East where the general lack of supply is likely to play a bigger role. 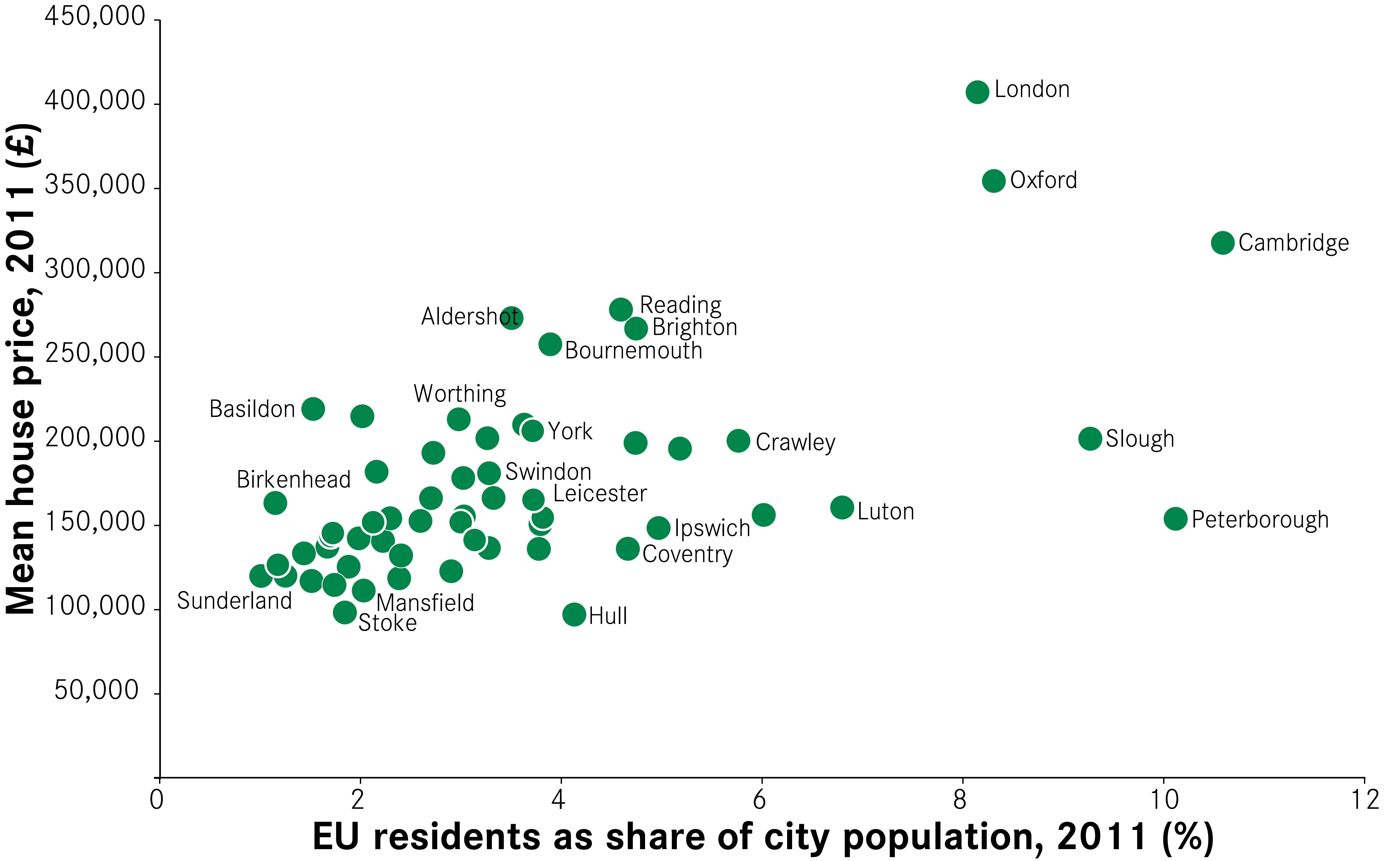