03How are changes in migration likely to impact city economies?

In order to understand the potential impacts of changes in migration, it is important to look at the contribution international migrants make to city economies.

The most successful places attract the largest shares of migrants

Figure 5 shows that there is a positive relationship between the share of new foreign migrants and economic performance at city level. Some of the most economically successful places, such as Cambridge, Oxford and London had the highest shares of new migrants in 2011. This suggests that international migrants tend to move to places that provide the best opportunities, just like domestic migrants.16 The ability to attract people from other parts of the world should be seen as a positive reflection of the economic performance and attractiveness of a place to live and work.

Figure 5: Relationship between all foreign migrants and productivity, 2011 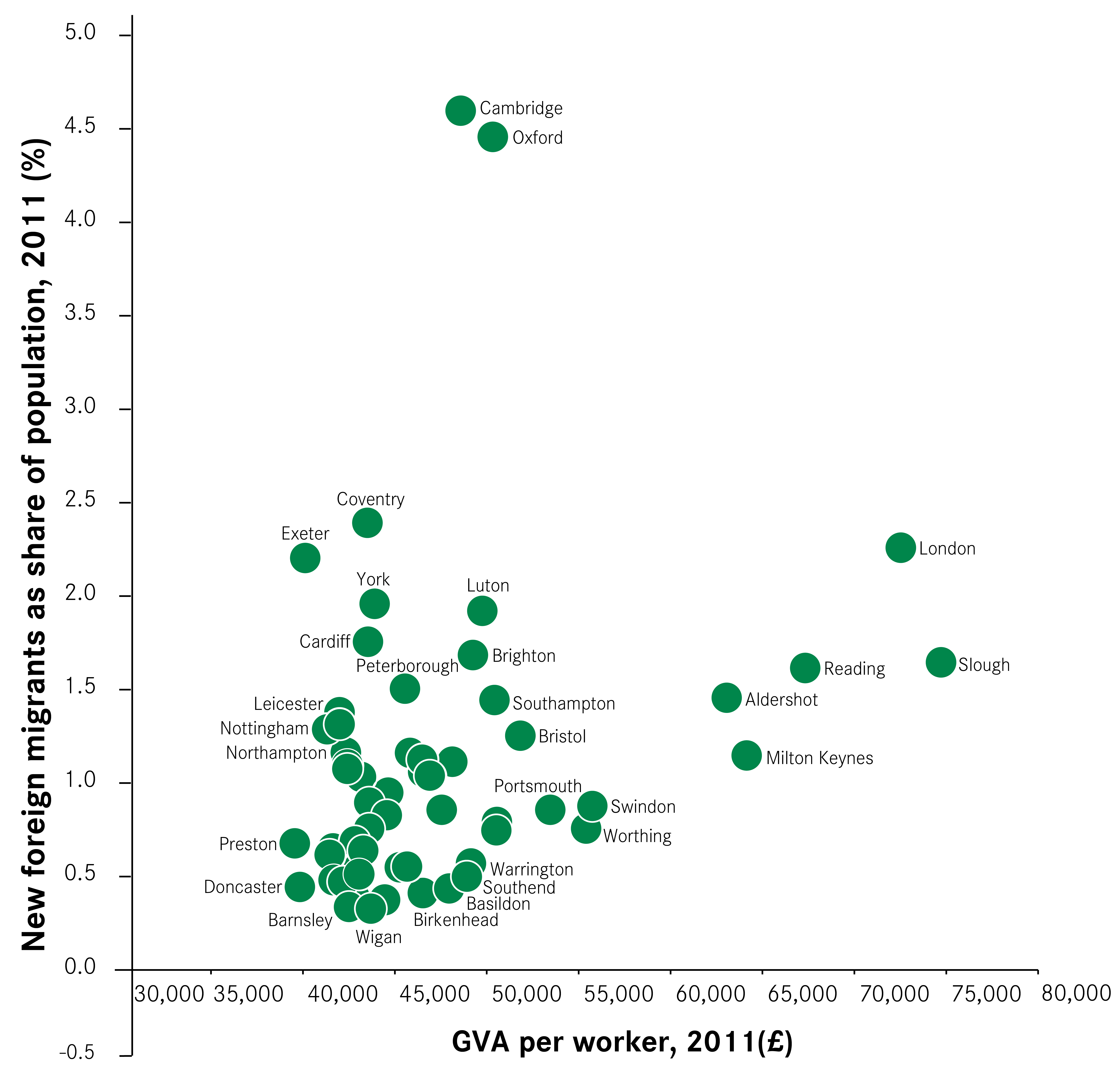 The evidence suggests that migrant diversity in urban areas has a positive effect on wages, employment and productivity for native workers.17 This is because migrants consume products and services in the places they live and work in, stimulating demand in the local economy and creating jobs. They may also bring skills that are complementary to those of the existing working population, leading to better ideas and knowledge creation, and therefore more innovation and higher productivity.18 Other studies also show that migrants are more likely to be self-employed than the native population and in places like London, migrant entrepreneurs tend to innovate more than others.19

The main issue with predicting the impact that migration changes will have on local economies is that we do not have enough data to accurately measure the economic and fiscal contribution that migrants make in city economies. The characteristics and employment profile of international migrant populations provide some indication though. For example, places that attract highly-skilled migrants are likely to see the largest economic benefits.20 By contrast, cities that attract less skilled workers may see fewer benefits. These places may also experience more competition for low-skilled jobs and pressure on public services as low-skill migrants are more likely to be on lower wages and to participate in welfare programmes.21

In every city, EU migrants are more likely to be in work than UK-born residents

EU migrants tend to be more highly qualified – but not everywhere

And they tend to be in low-skilled occupations and industries

The majority of EU workers in England and Wales in 2011 were employed in low-skilled occupations.22 Given the skills profile of migrants, this suggests that there may be barriers to this group of people accessing jobs that match their skills level. But again there is variation between cities. In Doncaster and Wakefield around three-quarters of EU workers were in low-skilled occupations, whereas in Cambridge just a quarter was.

The industry breakdown of EU workers also indicates there are skill mismatches. More than a quarter of EU workers in England and Wales work in either hospitality or retail, which are predominantly low-skilled industries. The two industries account for a similar share of employment in the majority of cities. More generally, the industry EU migrants work in seems to reflect the local industrial structure. For example, in Telford almost half of EU migrants are in agriculture or manufacturing. In contrast, in Cambridge, 20 per cent of the EU workforce were employed in professional services.

Overall, the skills, age and employment profiles of EU migrants suggest that this group of people make a positive contribution to the national economy. But their profile and, as a result, their contribution varies across the country.

Box 2: What the profile of EU migrants tells us about the Brexit vote

Immigration has been at the heart of the debate on Brexit. But the number of foreign people living in a place does not seem to have directly influenced how a city voted in the referendum, as shown in Figure 6 . For example, Cambridge, the place with the highest share of EU residents voted to remain in the EU but Peterborough, the place with the second highest share of EU population, voted to leave.

This suggests that it is important to look beyond the size of the foreign population in a place to understand the voting patterns. Looking at the skills profile of EU migrants reveals that places that voted to remain tended to have a higher share of EU migrants with a degree. In contrast, the places that voted to leave were the ones that had a higher share of EU migrants with no qualifications. While the majority of these cities have relatively small migrant populations, they may have made a smaller economic contribution and increased competition for low-skilled jobs. And the way people voted might have reflected these concerns.

But this is only part of the story. Looking at the characteristics of the total resident population such as skills and occupation, rather than just EU migrants, reveals that the places that tended to vote for Brexit are the ones that have a higher share of people with no or few qualifications – and variation in the profile of EU migrants tends to align with the broader economic profile of a city. They also tend to have a higher share of people in skilled-manual jobs, which are arguably the ones most under threat from ongoing globalisation and technological change (see Figure 7). And this suggests that these places have mainly struggled with structural changes in the economy and the inevitable displacement that this process has caused. 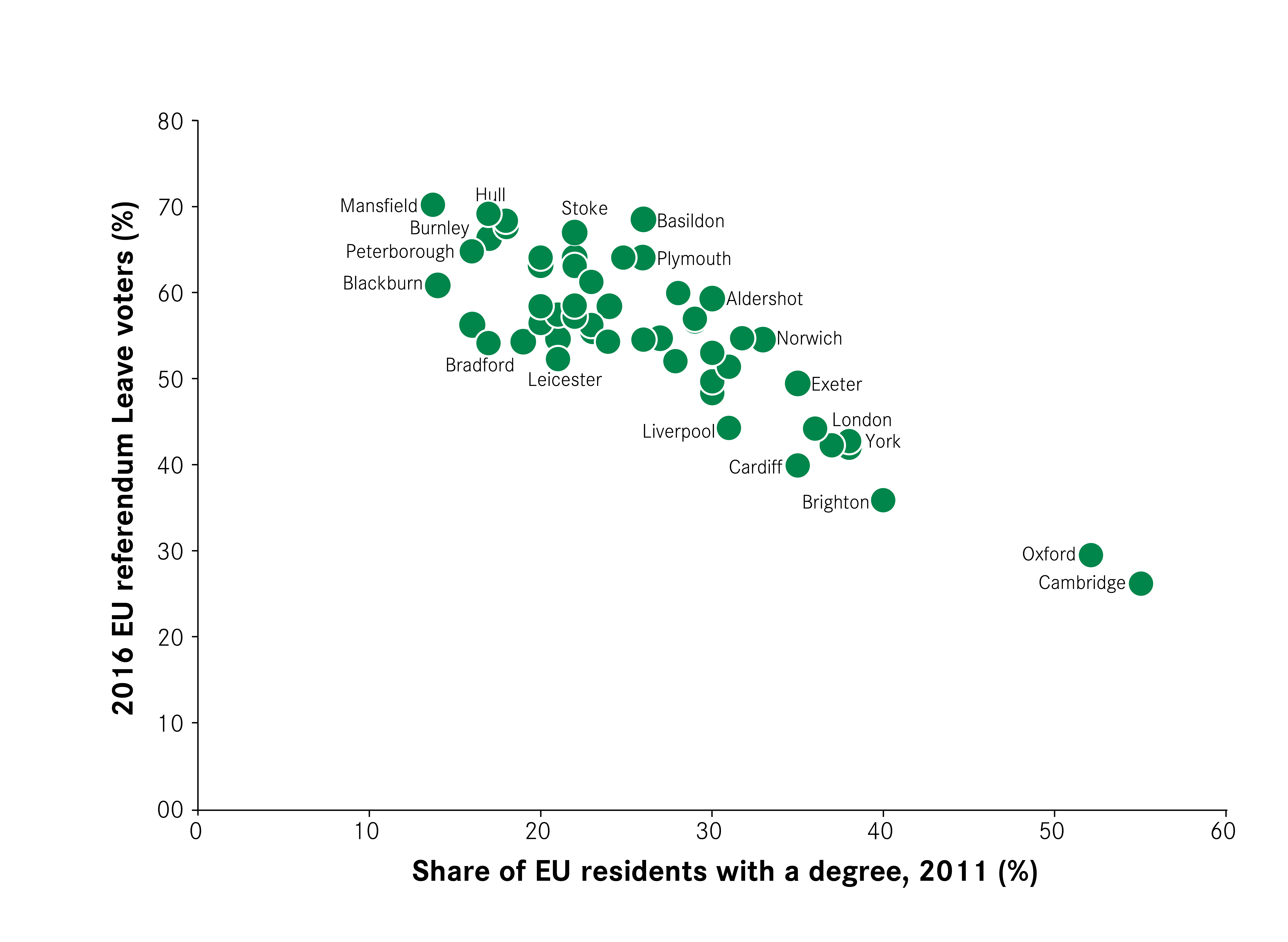 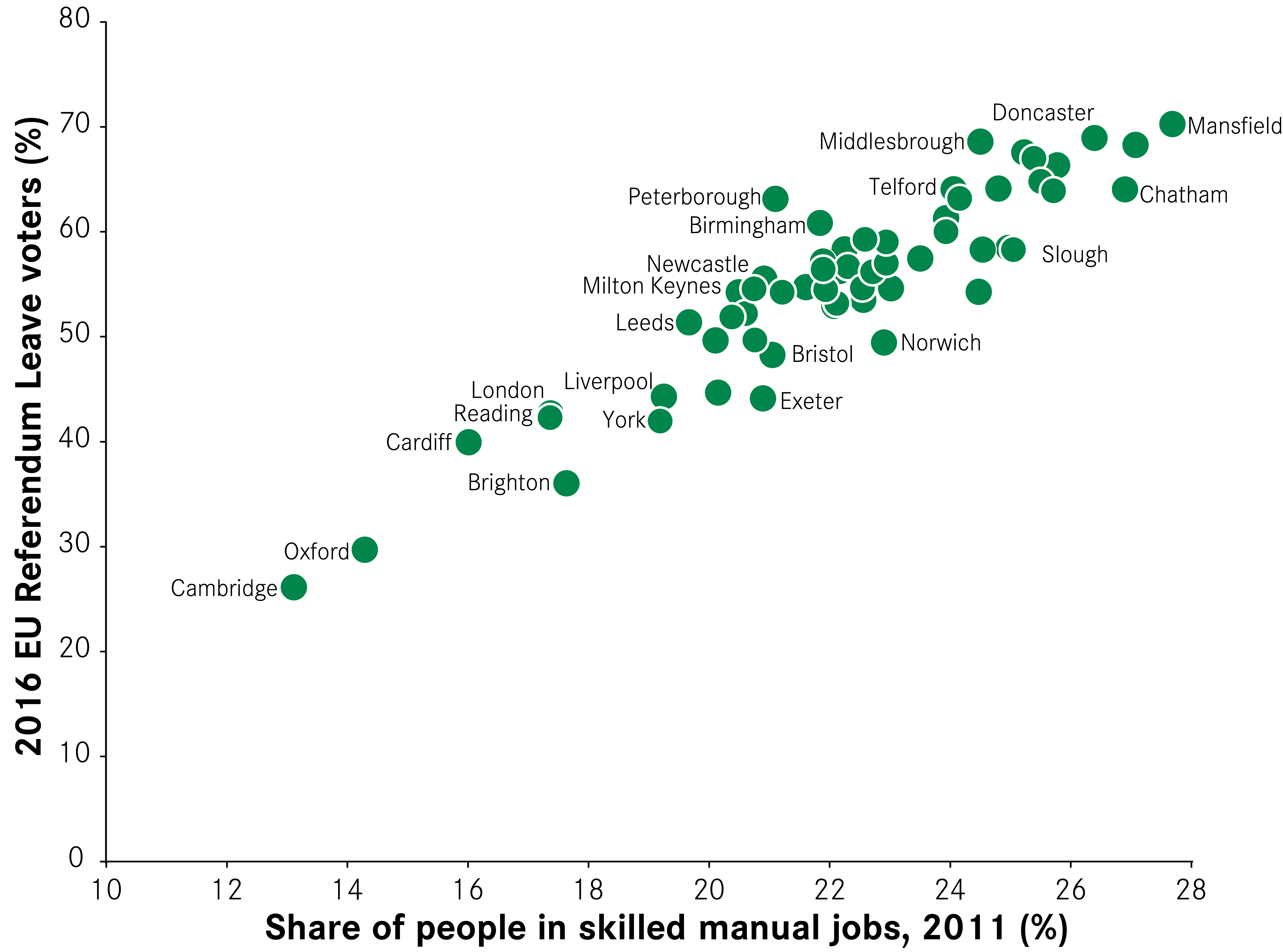 Predicting the impact: cities and sectors

Over the past decade, EU migrants have become an increasingly important element of urban labour markets, accounting for 5 per cent of total jobs in cities. But there is variation across the country, with cities in the Greater South East more reliant on the EU workforce than cities elsewhere. Cambridge had the largest share of EU workers, who accounted for 12 per cent of the city’s total workforce in 2011. Peterborough (11 per cent), London (9 per cent), Oxford (9 per cent) also rely heavily on EU workers.

In contrast, less than 1 per cent of workers in Middlesbrough are EU-born. Alongside variations in the profile of the EU-born population across cities discussed in the last section, differences in the size of the EU workforce means that the reduction in the number of people from the rest of the EU coming to this country will play out very differently across places.

Analysis of the economic impact of post-Brexit trade agreements finds that cities in the Greater South East will be the most negatively affected.23 This suggests that these cities are likely to experience a double-shock: one caused by trade reduction with other EU countries and the other caused by possible labour shortages. As these are the most economically vibrant places this double-shock is likely to have a strong impact on the national economy.

Looking at levels of dependency on EU workers across industries reveals stark differences. Figure 8 shows that hospitality was the sector most reliant on EU workforce: around one in every 10 jobs in hospitality in England and Wales was taken by an EU worker whereas this was less than one every 80 for jobs in public administration — and the pattern is similar across urban areas. This suggests that employers in the hospitality industry face the biggest shortfalls.

Figure 8: Which sectors are most reliant on EU workforce, 2011 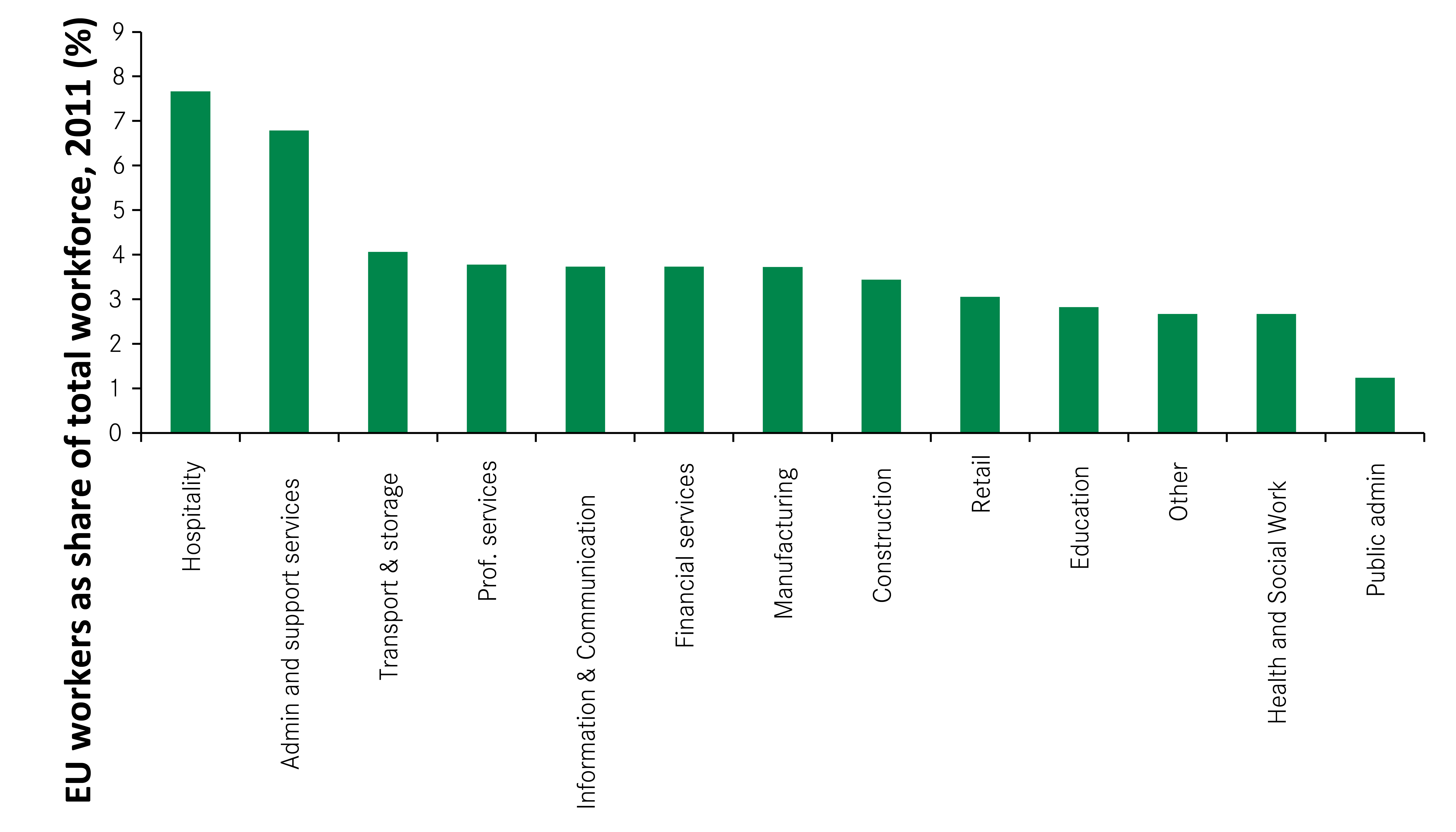 Variation in the share of EU workers by industry in different cities means that the labour shortages likely to arise from a fall in EU net migration will play out very differently across sectors and places. In Cardiff, one in three people employed in the hospitality sector was from the EU and in London and Cambridge it was one in every five. But in Peterborough, ‘admin and support services’ was the most reliant on EU workers with one in four workers being EU-born. And in Northampton, the sector most reliant on EU workers was transport and storage, with EU-born migrants accounting for 17 per cent of the sector’s workforce in the city.

Some cities, particularly those in the Greater South East, have a relatively high degree of dependence on EU workers in more than one sector. For example, in Cambridge there are four sectors in which EU workforce accounts for more than 15 per cent of the total: hospitality (22 per cent), finance (19 per cent), admin and support activities (17 per cent) and professional services (16 per cent). Similarly in London, three sectors — hospitality (20 per cent), admin and support activities (16 per cent) and construction (16 per cent) — rely heavily on the EU workforce. By contrast, in Middlesbrough, hospitality was the industry most reliant on EU workers but they accounted for only 1.7 per cent of the workforce in this sector.

Box 3: Brexit and the impact on international students in cities

Brexit is also likely to affect the number of EU students attending universities in England and Wales. In 2015, EU students account for 6 per cent of the university student population in the UK. But in some cities, the proportion of EU students is higher, including Cambridge (10 per cent), London (9 per cent) and Oxford (8 per cent).

Changes to tuition fees for EU students are predicted to lead to a 57 per cent (31,000) fall in EU students and a £40 million fall in income from tuition fees with 100 institutions worse off. The fall is predicted to be partly compensated by 14,500 more non-EU students a year choosing to study in the UK if the falling pound makes UK courses cheaper.

Domestic migration may help to fill the jobs in cities likely to experience labour shortages. Figure 9 shows that cities with a higher share of EU migrants also tend to have a higher share of domestic migrants. These cities draw in migrants from across the UK and other countries because of the job opportunities they provide. This suggests that EU workers could be replaced by more workers from other parts of the country. 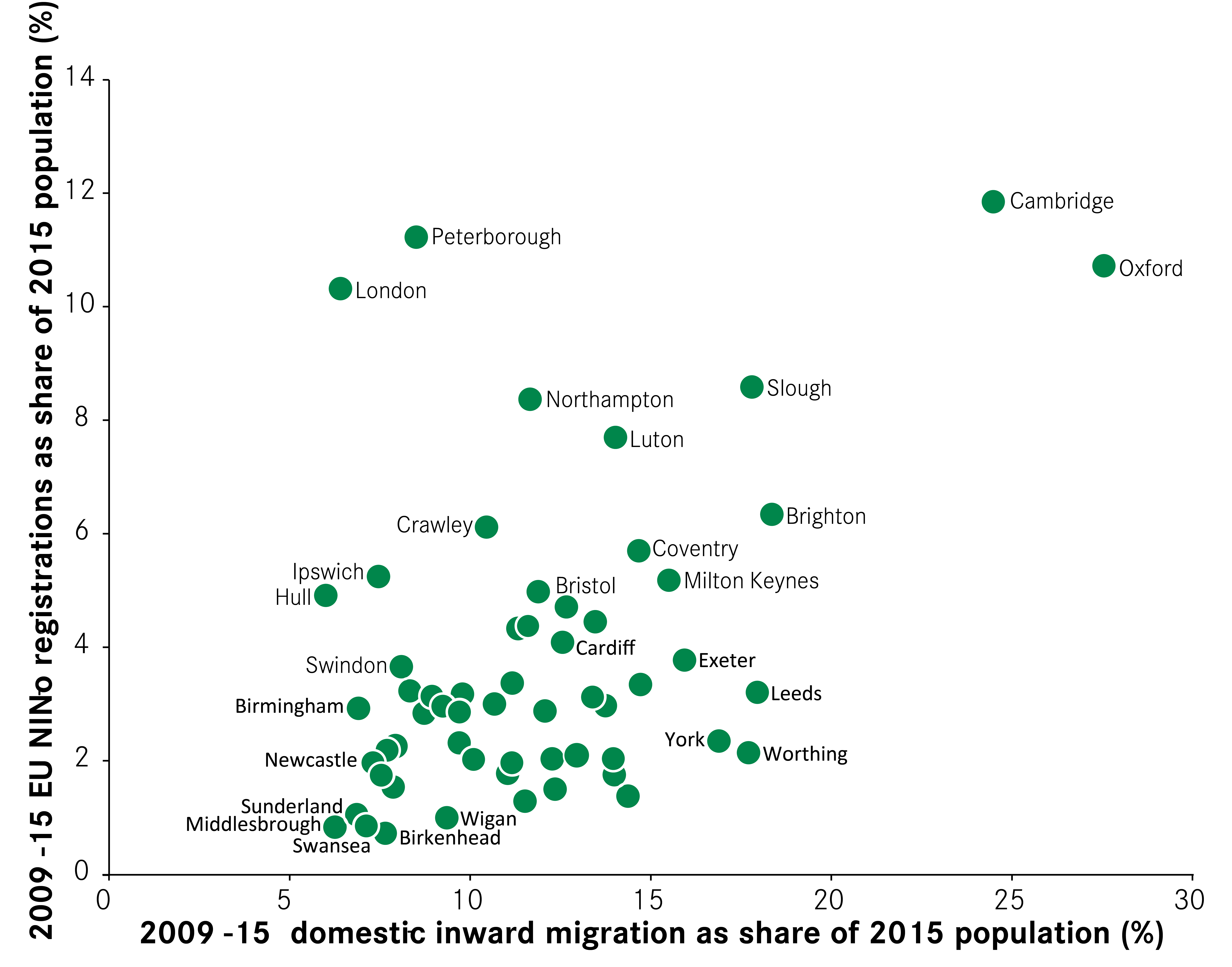 But there is a caveat to this. As the analysis in the previous section shows, the industries that are most likely to experience the greatest staff shortages are predominantly low-skilled. While highly skilled people tend to be mobile, that is not the case for the vast majority of domestic low-skilled workers. In addition, the places that are most likely to be affected by these shortages caused by a fall in EU migration are in the Greater South East, where living costs are higher. This means that in order to support domestic migration, particularly among the low-skilled, to help respond to potential labour shortages more needs to be done to increase the attractiveness of these places to this group of people, such as reducing housing costs and increasing wages.