02How is Brexit likely to affect migration flows to cities?

Migration to cities is likely to be affected by two main factors over the longer term: policy change and economic performance.

There is a high degree of uncertainty with regards to post-Brexit migration policy and there are several different labour migration models that could potentially be used to offset possible labour shortages. The UK is unlikely to see a dramatic fall in the number of EU workers but, while there are still several different models that could potentially be used, the government commitment to end the free movement of EU citizens to the UK means the inflow of migrants is likely to be reduced. The exact model put in place has implications for overall migration flows and the types of migrants locating in the UK.8 For example, if the criteria for non-European Economic Area (EEA) migrants are applied to EEA migrants, it will be harder for low-skilled workers from the continent to enter the UK. However, the Government may opt for different arrangements such as temporary permits for low-skilled workers to meet business needs in particular sectors, at least in the short-term.

International migration to the UK is also likely to be affected by changes in economic performance.

The main reason why EU migrants come to the UK, and to cities in particular, is the economic opportunities they provide.9 But research suggests that in both hard and soft Brexit scenarios, all cities will be negatively affected by a change in the UK’s trade relationships.10 These trade effects are likely to be compounded by a fall in migration. Lower levels of migration may, in turn, lead to lower output and employment growth, and consequently even lower migration.11

But there has already been a fall in migration since the referendum predominantly driven by migrants from the EU.

Migration data shows that since the EU referendum, the number of people coming to the UK has fallen whereas the number of people leaving has increased. This has resulted in a fall in net migration of 106,000 in 2017 compared to 2016.11 EU citizens accounted for over three-quarters of this fall.13 The latest figures indicate that non-EU net migration is now bigger than EU net migration.14 Changes in other EU economies, the falling value of Sterling and anticipated policy changes seem to have affected people’s decisions to move to the UK – prior to any change to migration policy.

The most recent data on National Insurance Number (NINo) registrations in England and Wales — often used as an indicator for the number of migrants moving into a geographical area15 — confirms this trend. Since the referendum, there has been a fall in the number of EU people registering as shown in Figure 3. The number of registrations for non-UK citizens fell by 6.9 per cent between 2016 and 2017, while EU citizen registrations fell by 9 per cent. Yet this follows a large increase in the two years from 2013. 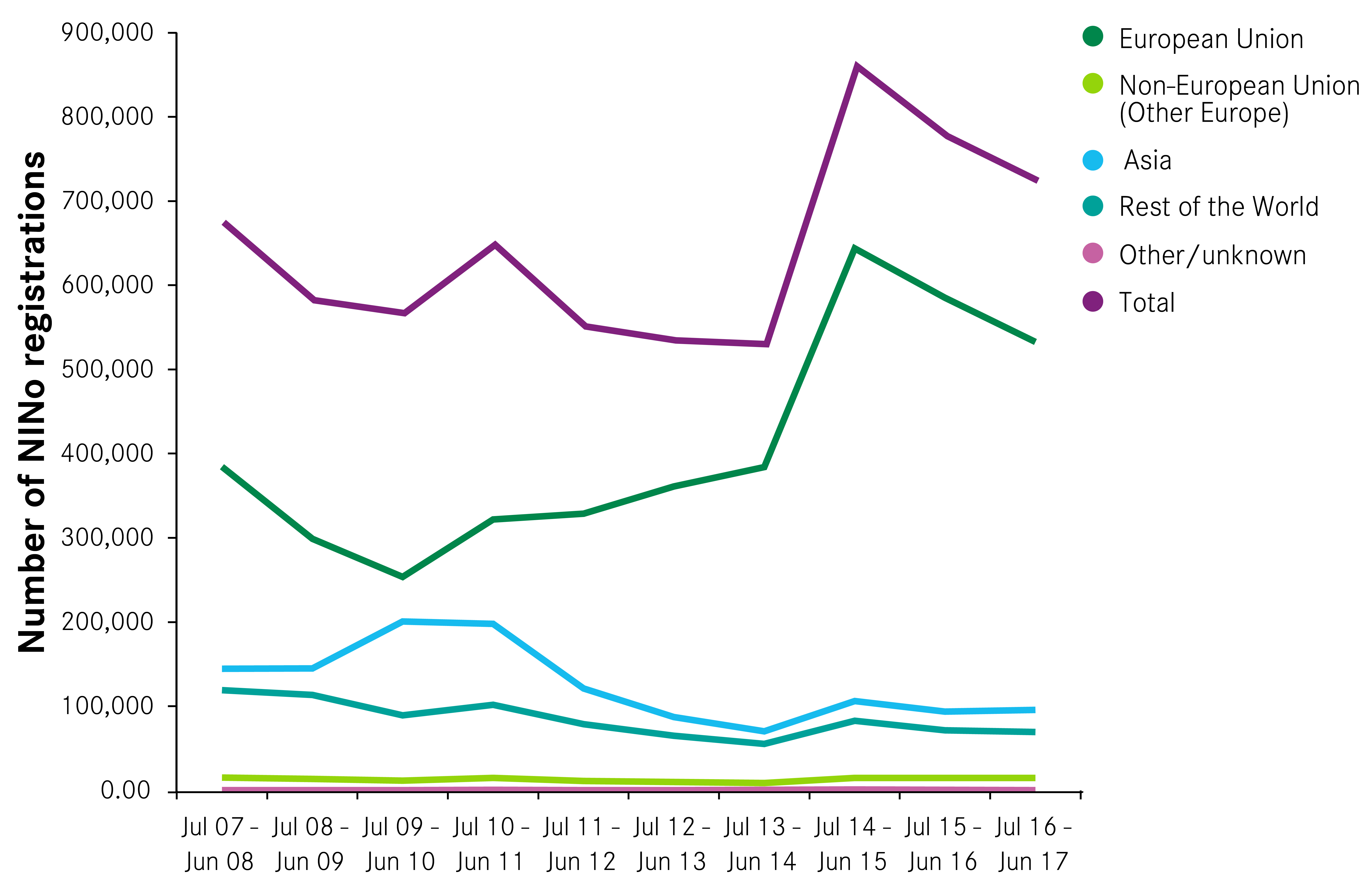 Figure 4 shows that the fall in the number of registrations for EU migrants varied across places. In absolute terms, London (-28,000) experienced the largest fall since the referendum (between 2015/16 and 2016/17), followed by Birmingham (-2,500). Looking at percentage changes, Mansfield (-31 per cent) and Middlesbrough (-27 per cent) experienced the largest decreases in registrations but this was from a low base. A small minority of cities experienced an increase in the number of NINo registrations: Burnley, Swansea, Derby, Swindon, Sunderland, Hull and Crawley. 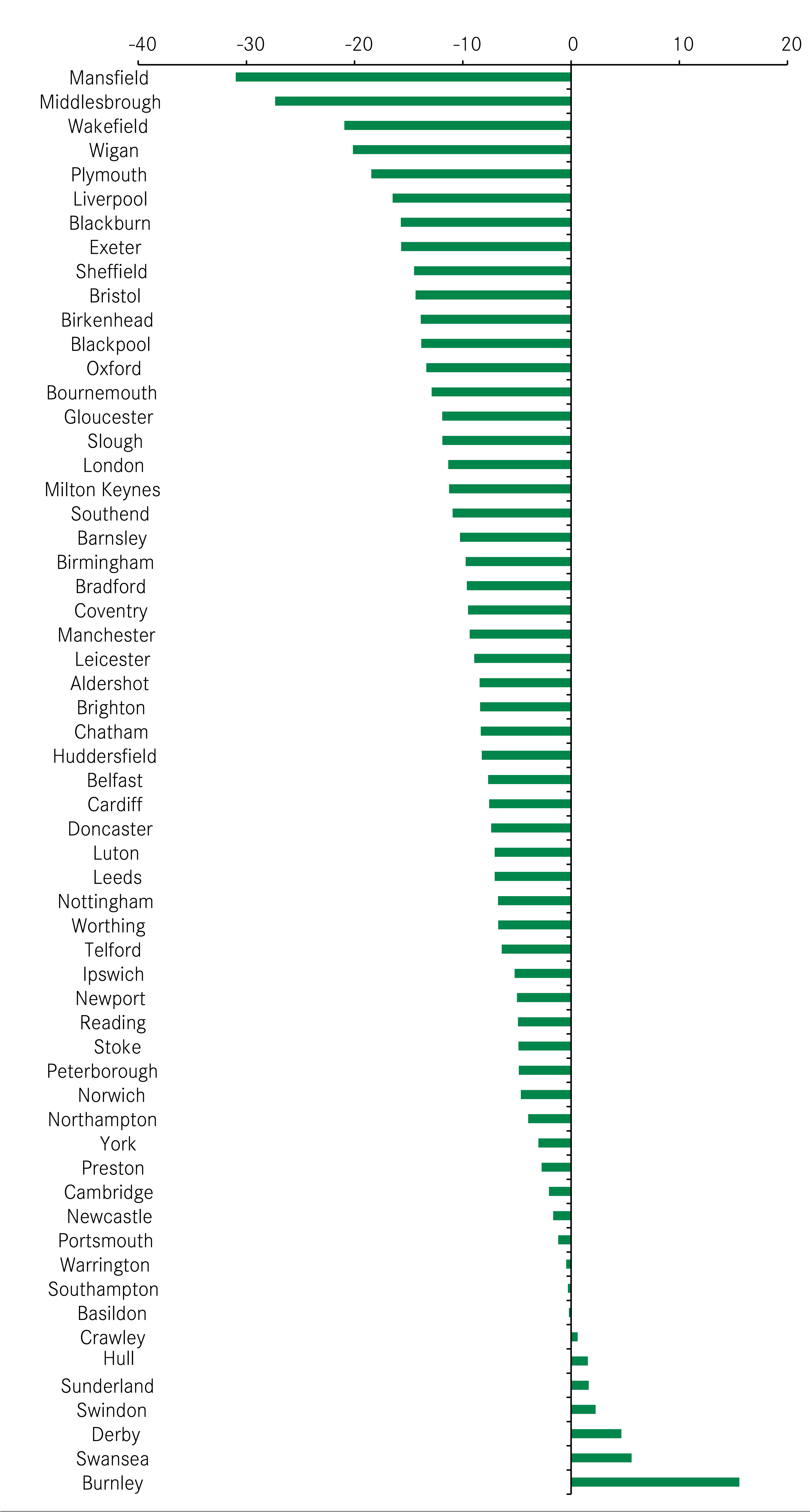