02Cities are places to play as well as to work

An inherent advantage of cities is that they provide both scale and density — many businesses, jobs and people clustered in one place. These qualities make cities attractive to businesses.

Scale provides businesses with many potential employees from which to hire, who choose to live in cities because they offer a wider choice of job opportunities. Density is especially important for businesses that benefit from the network of knowledge that cities, and city centres in particular, provide.2 It is high-skilled businesses that export their goods and services that have most to gain, as explained in Box 3. Being located alongside like-minded firms makes it easy for them to share knowledge and work together, boosting their productivity.

It is for this reason that the UK economy is concentrated within cities, and why high-skilled exporting businesses in particular are based in urban locations.3 Since these are the firms that contribute most to productivity growth,4 cities play an especially important role in the national economy.

Cities are able to play an important role as places of consumption as well as places of production. The inherent benefits of a city allow it to support a greater number of amenities. Density and scale create a large market of customers — from within and beyond city borders — that sustains amenities. The fixed costs of setting up amenities can be spread across many customers. Box 4 illustrates how the scale of London supported the emergence of theatres in the 16th Century.

These arguments hold especially for city centres and their high streets. The funnelling of people into these central locations provides an opportunity to sell them goods and services. It is for this reason that high streets emerged in the first place, because the flow of people provided a market.

Box 3: The role of exporting businesses in city economies

There are two types of private sector business:

Local services sell directly to consumers. They include estate agents and amenities such as hairdressers and cafes. As a result, their location decisions are determined predominantly by where their customers live, work or trade from. They are also known as ‘non-tradable’ businesses.

Exporting businesses, such as investment banks, advertising agencies and manufacturers, sell their products or services outside their local area to regional, national, and international markets. Unlike local services, these exporting businesses are not tied to one local market. They are also known as ‘tradable’ businesses.

They generate income independent of the performance of their local economy, because they sell to other markets.5

They tend to be more productive than local services firms and are drivers of productivity increases over time. For example, while a hairdresser is as productive as 50 years ago, a worker in a car factory is now many times more productive.6

Exporting businesses have a multiplier effect on jobs in local services. The better they perform, the higher the local disposable income in the economy, so the higher the demand for the goods and services of local services such as shops and restaurants. All exporting businesses have a multiplier effect, but it is much bigger for high-skilled exporters than for low-skilled exporters. For example, for every 10 new high-skilled exporting jobs created between 1995 and 2015 in urban Britain, 17 new jobs were generated in low-skilled local services.7

For the purpose of this research, exporters and local services are defined using Standard Industrial Codes (SIC).8 We use these to identify jobs in sectors that have the potential to sell to markets beyond their local area.

Box 4: The emergence of theatres in 16th Century London

In Triumph of the City9 urban economist Edward Glaeser explains how cities made the first theatres possible. Up until the 1500s, drama troupes travelled around the country performing. By constantly moving to new locations, the actors could access enough viewers to support themselves.

But by the 16th Century, the growth of London provided a permanent base for actors. The city’s size gave them access to large enough audiences – even in a fixed position – to make ends meet. Not only was the city’s size important for finding customers, it also helped actors meet and work together in a time before drama schools.

But when amenities are broken down into a number of categories, differences start to emerge, and the benefit of an urban location becomes clear. This can be seen in four ways.

This is particularly the case for performing arts venues, as Figure 2 shows. In total, 81 per cent of these venues were city based in 2018, and over half were based in city centres.

Figure 1: The distribution of population, day-to-day and specialist amenities across Great Britain 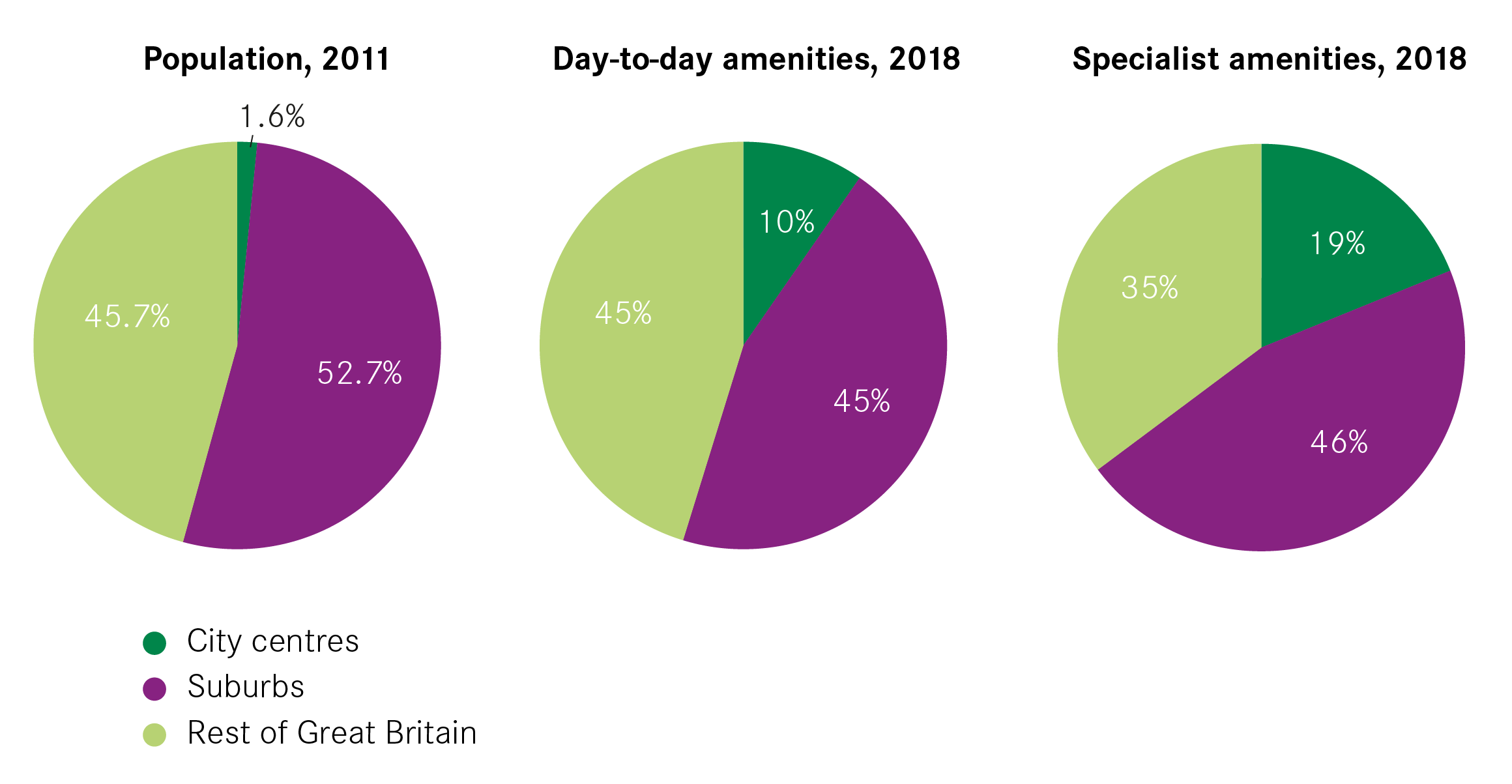 In comparison, 55 per cent of day-to-day amenities are in cities, which is again in line with the distribution of the population. Looking at more specific amenities, beauty salons and retail follow a similar pattern, with 56 and 57 per cent respectively in cities. This is because the vast majority of these amenities are day-to-day (such as hairdressers and clothes shops) rather than specialist (such as tattoo studios).

An exception is the location of museums and galleries, which includes historic houses. Despite being specialist amenities, these are predominantly located outside cities. This is because their locations are often set by factors other than the ability to maximise customers, such as their proximity to a historical site.

Figure 2: The location of amenities by category, 2018 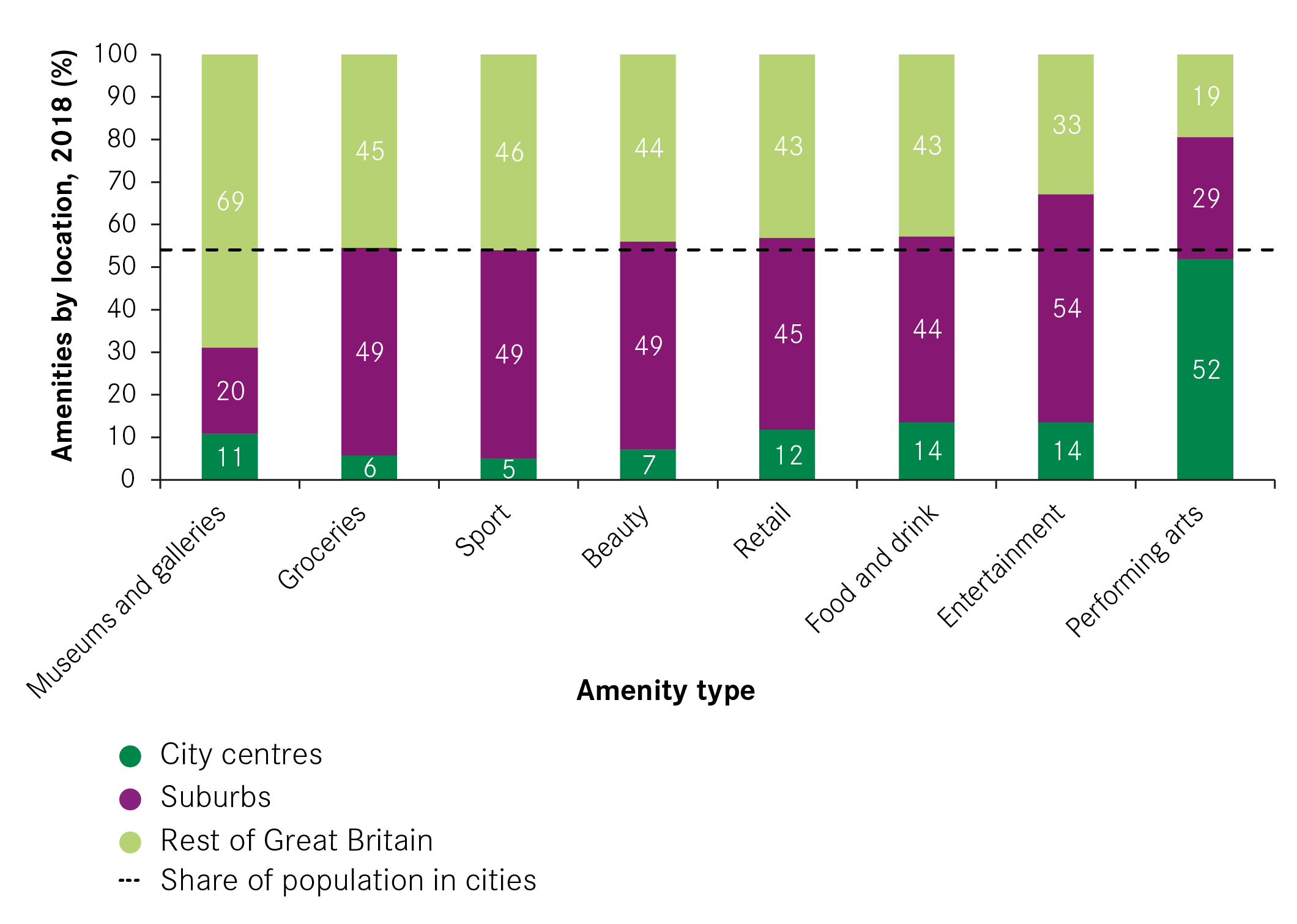 Premium amenities — those selling more expensive goods and services, such as designer retailers or Michelin-starred restaurants — are more concentrated in cities than the population. This can be illustrated by looking at the distribution of specific food and drink amenities: fast food and restaurants.

Cities offer slightly greater access to fast food — a cheaper way to eat, on average — than other parts of the country. Cities house 59 per cent of these amenities, as shown in Figure 3. But restaurants — a more expensive way to eat — are much more city focused. Over two-thirds of the country’s restaurants are located in a city and one in five restaurants is in a city centre.

Figure 3: Spread of fast food and restaurants across Great Britain, 2018 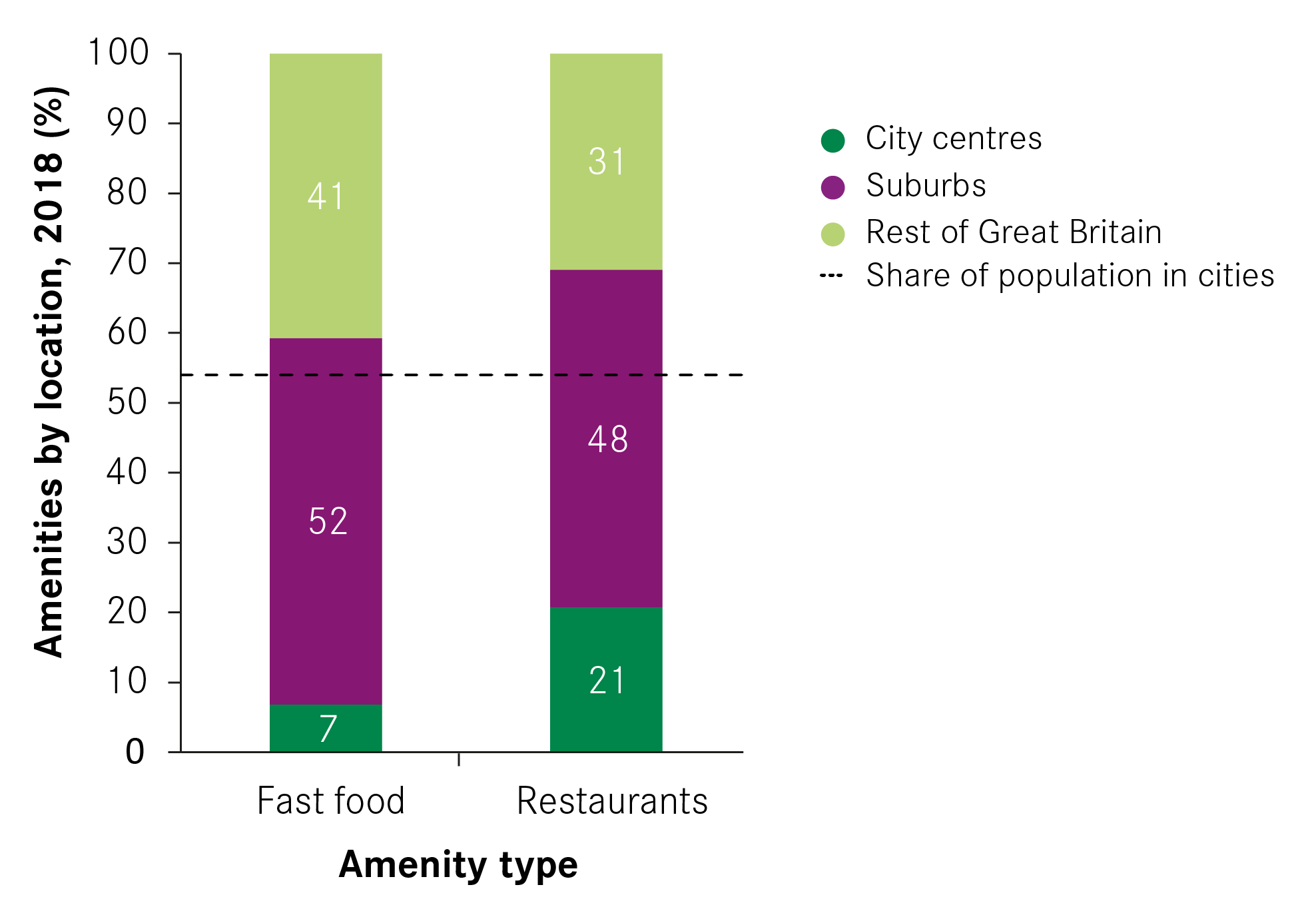 In contrast, in the rest of the country the majority of places to eat provide British food, and just 6 per cent provide cuisines outside of the top six.

City centres are more diverse than suburbs. While ‘other’ cuisines account for 21 per cent of all restaurants in suburban locations, this rises to 29 per cent in city centres.

Figure 4: Variety of cuisines on offer in cities and the rest of Great Britain, 2018 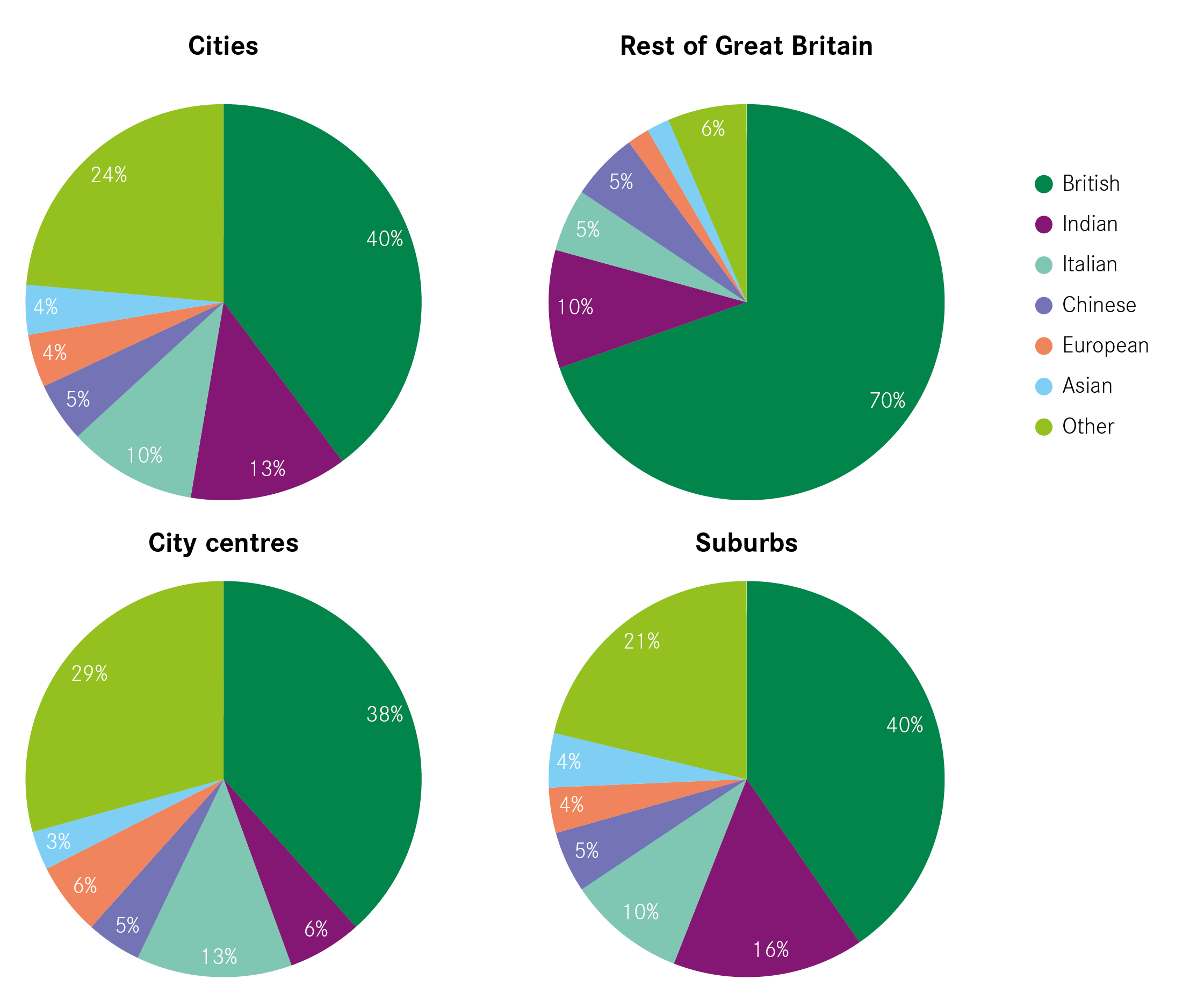 The average number of employees employed by an amenity tends to be larger in cities than elsewhere. This is particularly the case for museums, galleries and sports facilities. The average city-based museum employs 17 workers, compared with 11 workers elsewhere in the country, as shown in Figure 5. Access to a city’s large population means venues can attract large enough audiences to recover fixed costs.

Groceries are the only type of amenity with larger shops outside of cities. This is likely due to the number of small convenience stores in city suburbs and the scope for out-of-town supermarkets to be much larger due to cheaper
property prices.

Data on employment for city centre amenities is not available.

Figure 5: Size of amenities in cities and elsewhere, 2017