In May, people living in the West Midlands city region will return to the polls to elect their second metro mayor. Introduced for the first time in 2017, this relatively new institution has significant executive powers and funding to make strategic decisions over the city region, allowing for policy to be better tailored to the local economy. When polled, 70 per cent of local voters in 2021 were aware that there was a West Midlands metro mayor, and 30 per cent could correctly name the incumbent, Andy Street. 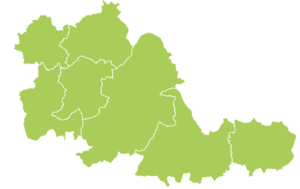 The West Midlands Combined Authority covers the local authorities in Figure 1. Data on the West Midlands economy and how it compares to other mayoral areas can be found in the factsheet, and for the Birmingham and Coventry primary urban areas in City Monitor, the High Street Tracker, and the UK Unemployment Tracker. The mayor will be elected for a three-year term (it will revert to four years after the next election in 2024).

The city region entered the Covid-19 pandemic with levels of unemployment well above the national average, and the number of people claiming unemployment-related benefits has increased by a further 77,000 since March 2020. While Centre for Cities expects the bounce back from Covid-19 to be swift, the city region’s challenges pre-pandemic will continue to be an issue post-pandemic.

The headline challenge for the West Midlands is to improve the performance of its economy. Unlike similar large urban areas in Western Europe and the US, the West Midlands lags behind the national average in terms of productivity, a key determinant of prosperity and jobs. Conservative estimates by Centre for Cities estimate that the city region is £10.5 billion per year smaller than it should be.1

The overriding economic goal for the next mayor should be to put policies in place that aim to reduce this gap by one third over the next decade. This briefing sets out the three priorities that the mayor should implement to help achieve this goal. They are: continued focus on improving Birmingham and Coventry city centres; getting people back into work; and, improving the bus network.