Cities on the national stage

The attention and prominence given to cities by the National Government have waxed and waned over the years. There was a clear drive from the 2010 and 2015 governments to empower a number of cities with wide-ranging devolution deals in return for electing a relatively powerful metro mayor.

Yet when asked, 84 per cent of city leaders did not believe their needs were represented on the national scale. Of the leaders that responded in this way, there was a range in the size of their administration, level of power, or whether or not they are an elected mayor.

Figure 13: Do you believe the needs of urban areas are sufficiently represented at the national level?

Only 14 per cent of leaders felt they were sufficiently represented nationally.  Because some respondents did not represent English cities, this may suggest that leaders’ interpretations of the word ‘national’ included both Westminster, and the devolved administrations.

Getting on with the Government?

While many leaders do not feel their needs are represented at the national level, they do need to maintain a productive relationship with government ministers and national civil servants particularly when responding to national policy priorities at the local level.

Figure 14a: This question refers to the nature of your contact with both the National Government and local stakeholder groups. Thinking about the following stakeholder groups, how would you judge your relationship with them? Consider the level and frequency of engagement; responsiveness to changes in local policy; and support and contribution to local policy development. 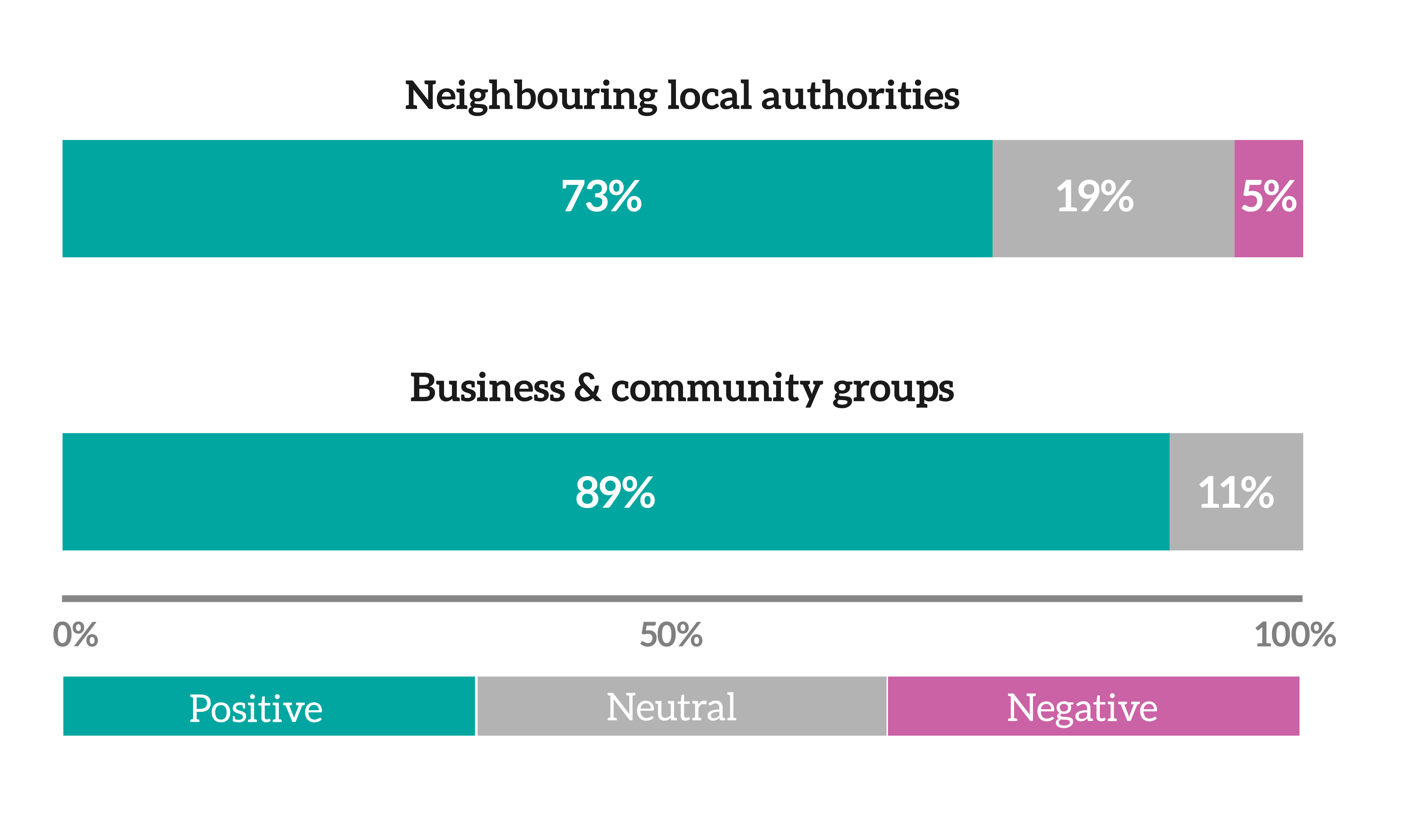 But, for leaders’ relationships with Ministers, it was more likely to be negative than positive: 32 per cent selected negative – just under a third of all survey participants.

Conversely, leaders were more likely to be positive toward the civil service with 30 per cent considering their relationship with officials to be positive.

Getting on with the locals

As part of the same question, leaders were also asked to rate their relationship with neighbouring authorities and local business and community groups.

Figure 14b: This question refers to the nature of your contact with both the National Government and local stakeholder groups. Thinking about the following stakeholder groups, how would you judge your relationship with them? Consider the level and frequency of engagement; responsiveness to changes in local policy; and support and contribution to local policy development.

Neighbouring authorities had a similar outcome with 73 per cent of leaders reporting positive relationships, and 19 per cent neutral. While combined authority representation on this survey is limited to a small sample, of those metro mayors that participated, the relationships at both the local and national scale were generally positive.

As new city leadership structures emerge and more places, particularly bigger cities, take up these opportunities, the appetite to continue on this track across all cities remains high.

The survey gave leaders a number of options on what they would hope to see devolved, regardless of what existing powers they have. In this instance, they could choose as many options as they wanted.

Figure 15: This question addresses potential areas for future devolution of powers. Of the following policy areas, where would you expect to see the greatest positive local economic impact with more local control? Some you have much control over, some very little. Please pick all the options where more local control would be economically beneficial. (Please select at least one)

Apprenticeships was chosen by two-thirds of leaders as a policy area which would have the greatest positive local impact with more local control – this was joint highest with transport and infrastructure (65 per cent each).

Just under two thirds (62 per cent) wanted more control over borrowing for housing. Around 76 per cent of leaders wanted some control over housing (either borrowing or planning). Of leaders that identified housing as an area of pressure, 85 per cent also wanted to see more local control.

Of those who identified under-18s education as the public service under the most pressure, 75 per cent believe this would also benefit from local control.

Schools and further education got the lowest proportion of responses with 38 per cent each. Two-fifths wanted business support and investment, and one-half wanted more say over health and social care.

Overall, every option leaders were given was chosen and one leader opted to devolve everything available.

Looking across the responses, there is no specific consensus among the leaders about what exactly should be devolved and everything scored highly. The appetite for devolution did not vary by city size. This response suggests that everything should be on the table for as many places as possible when it comes to further devolution.