How to spend it – Flexible or Certain?

Revenue funding was highlighted by nearly every respondent as a big challenge to service delivery. In this context, leaders were asked to choose one of two changes to how money could be spent in their area – the ability to integrate budgets; or longer-term funding periods.

Figure 10: If you could make one change to the way money is spent in your area, which of the following, if any, would you choose? (Please select one)

Over one-half of the respondents opted for more certainty through longer funding periods, with fewer than 40 per cent preferring a more integrated approach. Two respondents did not choose either option.

In 2019, the Government will announce its Spending Review for funding from 2020 which is likely to cover at least three years. Leaders were asked to offer one area of public service spending where they wanted to see an increase in revenue, alongside one area where a spending freeze or cut would have the least negative impact. 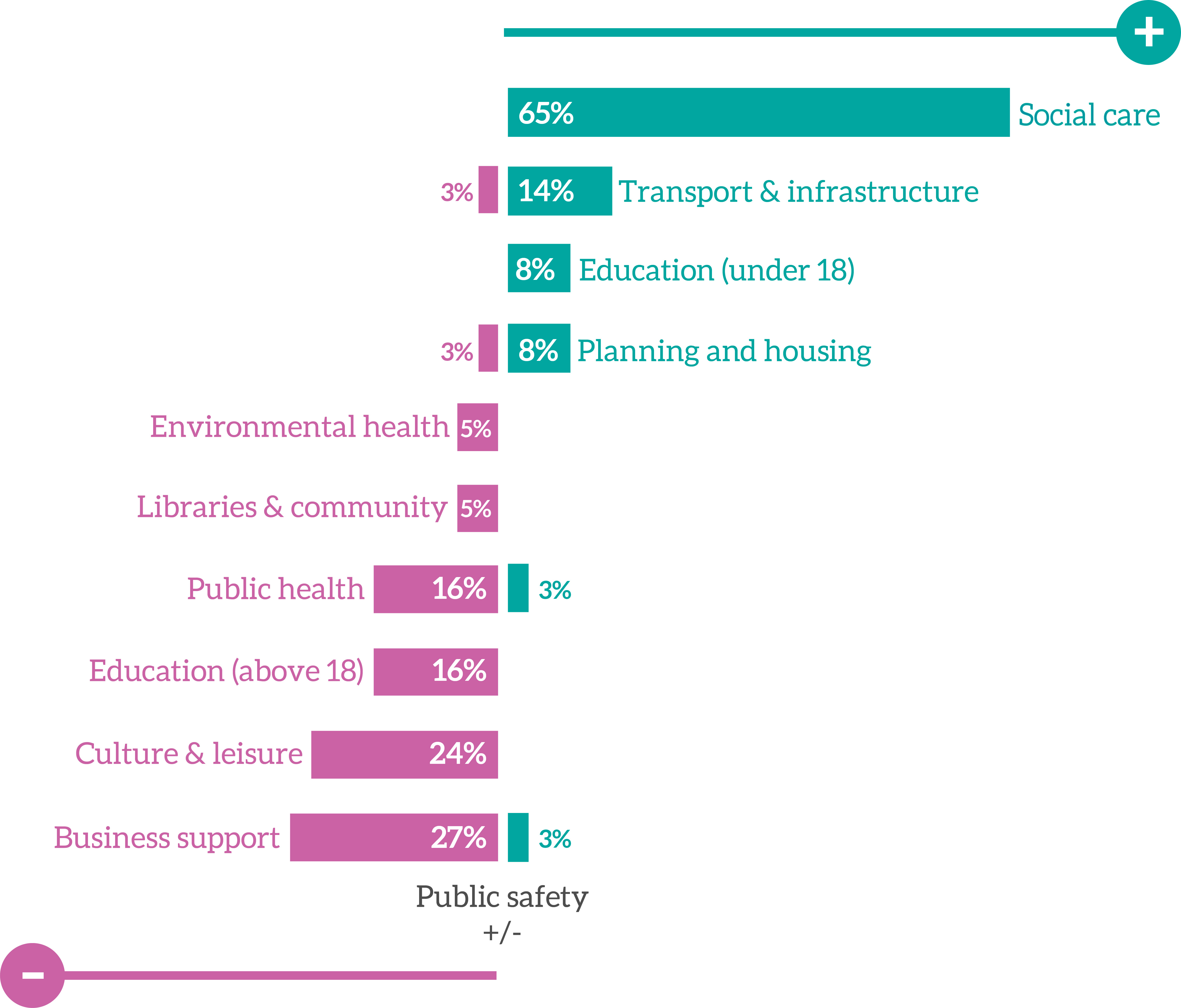 Just under two thirds (65 per cent) of leaders chose social care for increased funding, matching their response on services under the most pressure.9

The only other relatively significant policy area chosen for further spending was transport and infrastructure, with 14 per cent of participants choosing this. A small proportion of participants chose under-18 education, housing, business support and public health over the other services listed.

There were five service areas that were not chosen for additional funding by any leader: Adult (above-18) education, public safety (including fire and policing), libraries and community services, environmental health, and culture and leisure.

Leaders were also asked which service, if cut or frozen, what would have the least negative impact. Of the service areas that were not chosen for additional spending, two of these were identified as areas that could be cut – environmental health and libraries and communities services. Culture and leisure services were chosen by just under one-quarter (24 per cent) of respondents, while over-18s education would be cut or frozen by 16 per cent of leaders surveyed.

While one leader did identify business support for additional funding, this service was chosen by the largest proportion (27 per cent) as an area that would have a less negative impact if funds were cut or frozen. Similarly, 16 per cent chose public health, although one participant would increase spending here.

There were three service areas that no leader would choose to cut spending in – these were social care, under-18s education and public safety. Public safety was the only service not chosen either for additional spending or a spending freeze.

How to spend it – A surprise capital grant

To establish where cities would put additional funds if they could, leaders were asked to allocate an additional capital grant across a number of areas of expenditure.

Figure 12: You have been given a large capital grant to spend in your area. Of the following, what would you spend it on, regardless of whether you control them? Spread 100% of the funding across the following options: 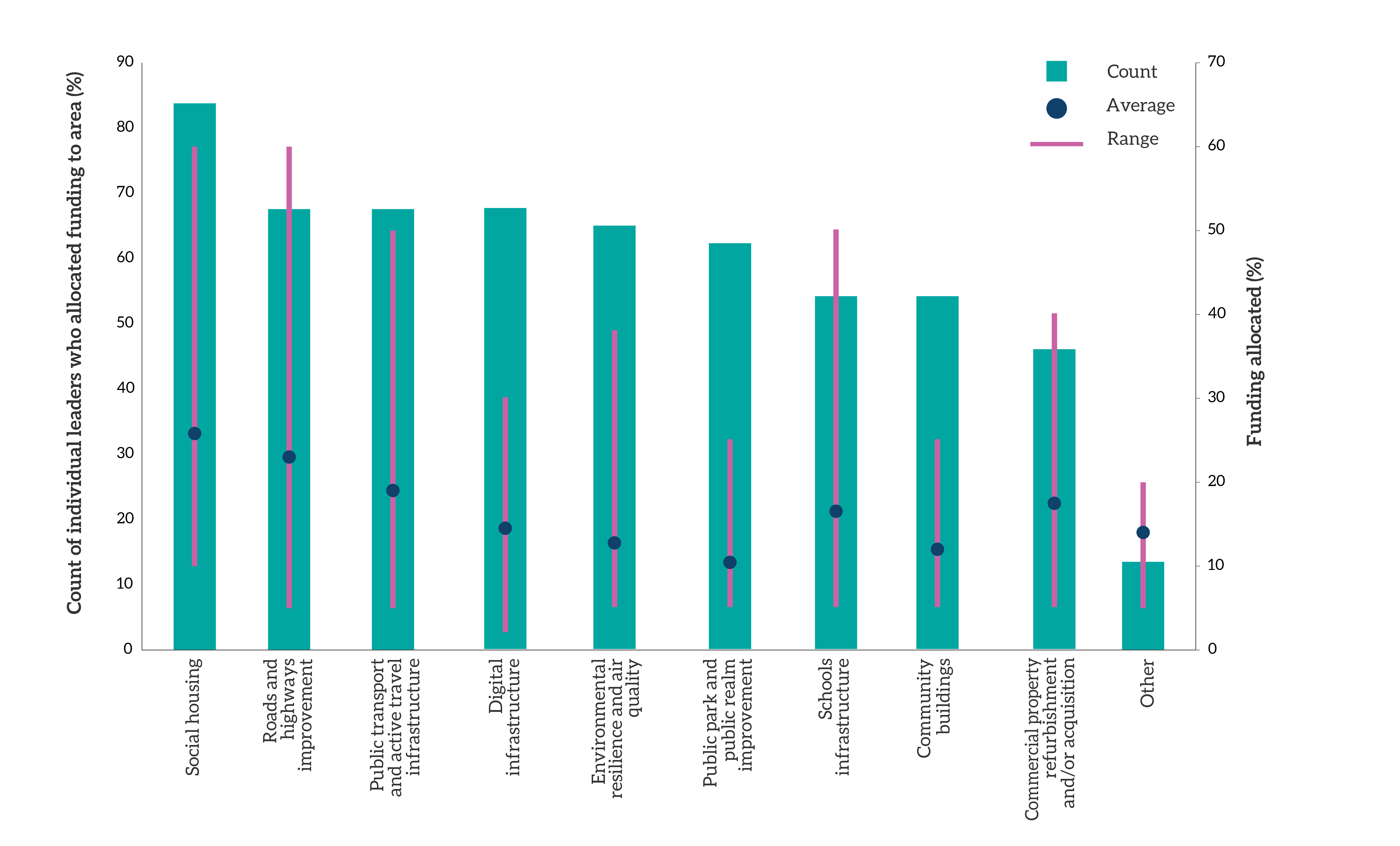 Social housing and public transport were also both selected by a high number of participants. 82 per cent of leaders would allocate some of their grant to social housing, and 73 per cent would allocate some grant to public transport. In contrast, fewer individual leaders chose roads and highways, despite having a higher average in spending terms. Those that chose to spend their grant on roads, tended to put more of the fund towards it.

Public realm improvement was allocated the least money on average, with 9 per cent, but once again a majority of leaders (62 per cent) put some money towards this area. The least likely areas to receive any money were commercial property refurbishment and community buildings (59 per cent of leaders each). But even where allocation was less likely, all of the options listed received at least some funding by at least one leader.

As well as receiving the most funds on average, social housing also tended to see high proportions allocated to it. At most, it was given 60 per cent of the funds. Similarly, the highest proportion given to roads and highways was 60 per cent, and public transport was given up to 50 per cent.