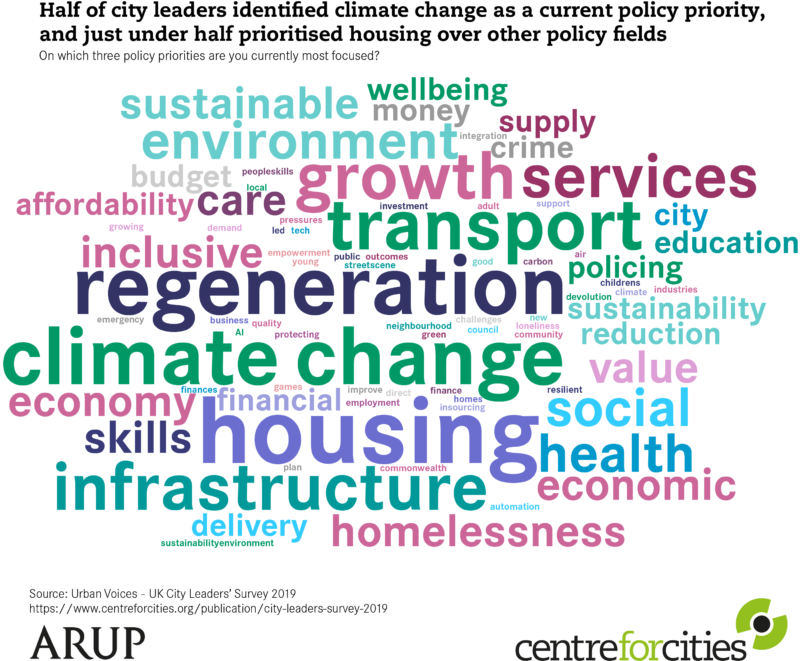 Half of the respondents (50 per cent) mentioned climate change as one of their top policy priorities. Challenges related to housing, such as affordability, availability of social housing and rising demand against supply, continue to be policy priorities. Almost half (44 per cent) of respondents said they are prioritising housing over other policy areas.

Almost one-third (29 per cent) of our respondents ranked either the development of local infrastructure or sustainable transport highly on their agenda. 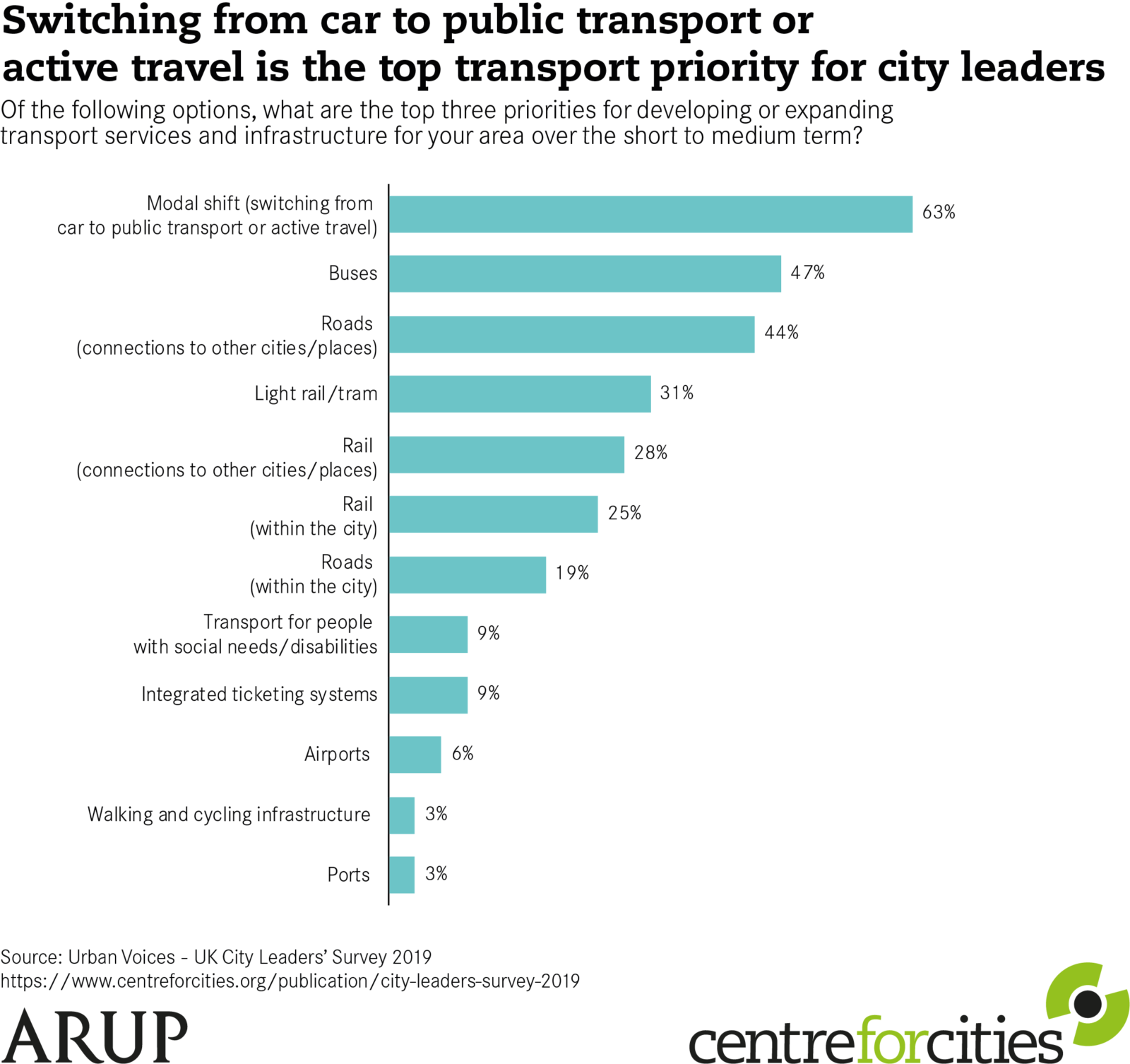 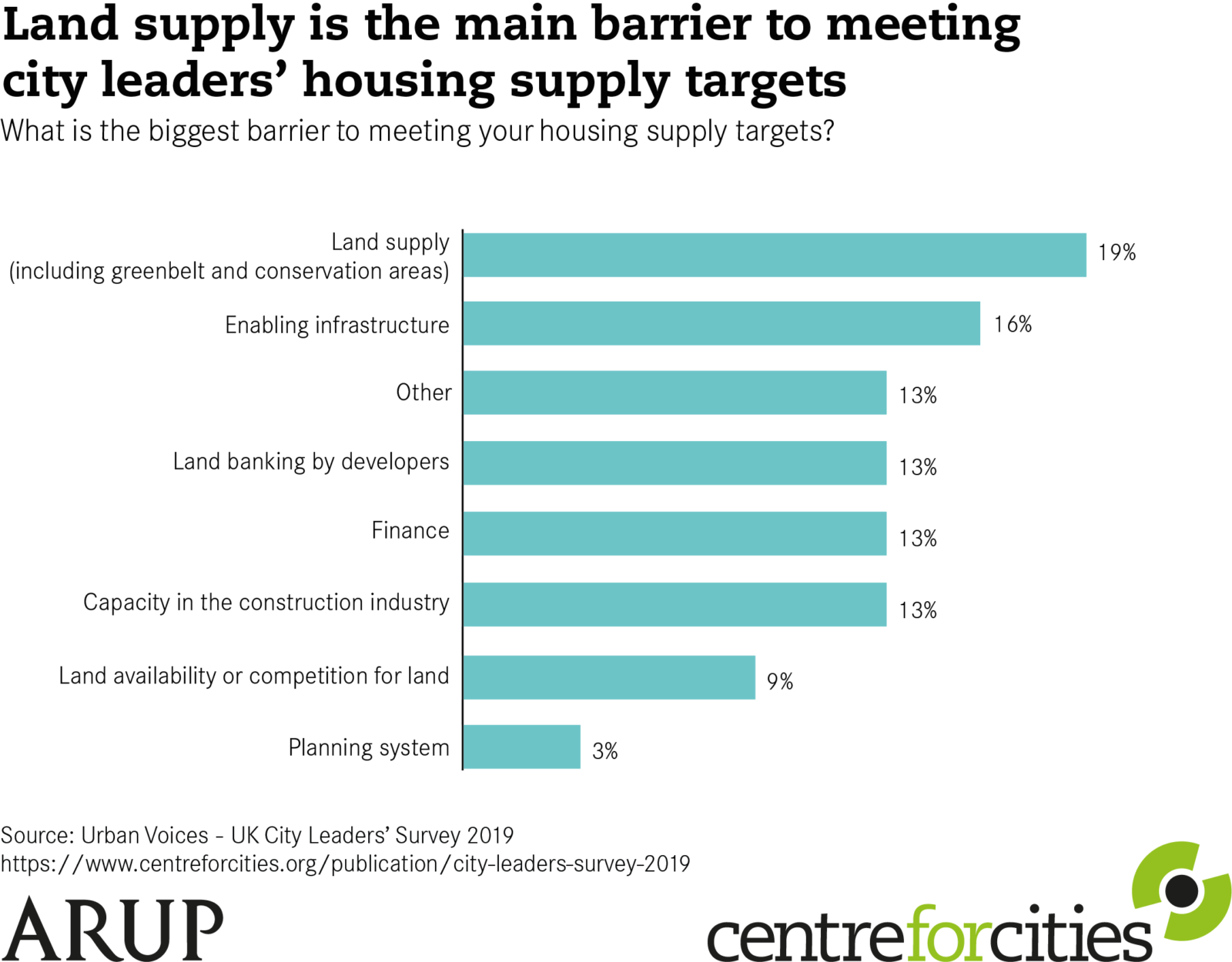 The UK still fails to build enough homes to meet demand. The strain on local areas varies across the country. Some areas have vacant homes and need regeneration, while other areas struggle to make housing affordable for many workers.

Land banking, finance, capacity in the construction industry and “other” (mostly financial and capacity barriers) all received an equal share of responses (13 per cent).

Only one respondent said that the planning system is the greatest obstacle to meeting housing supply goals, and no one reported that local opposition to development or low demand hinders the accomplishment of these goals. 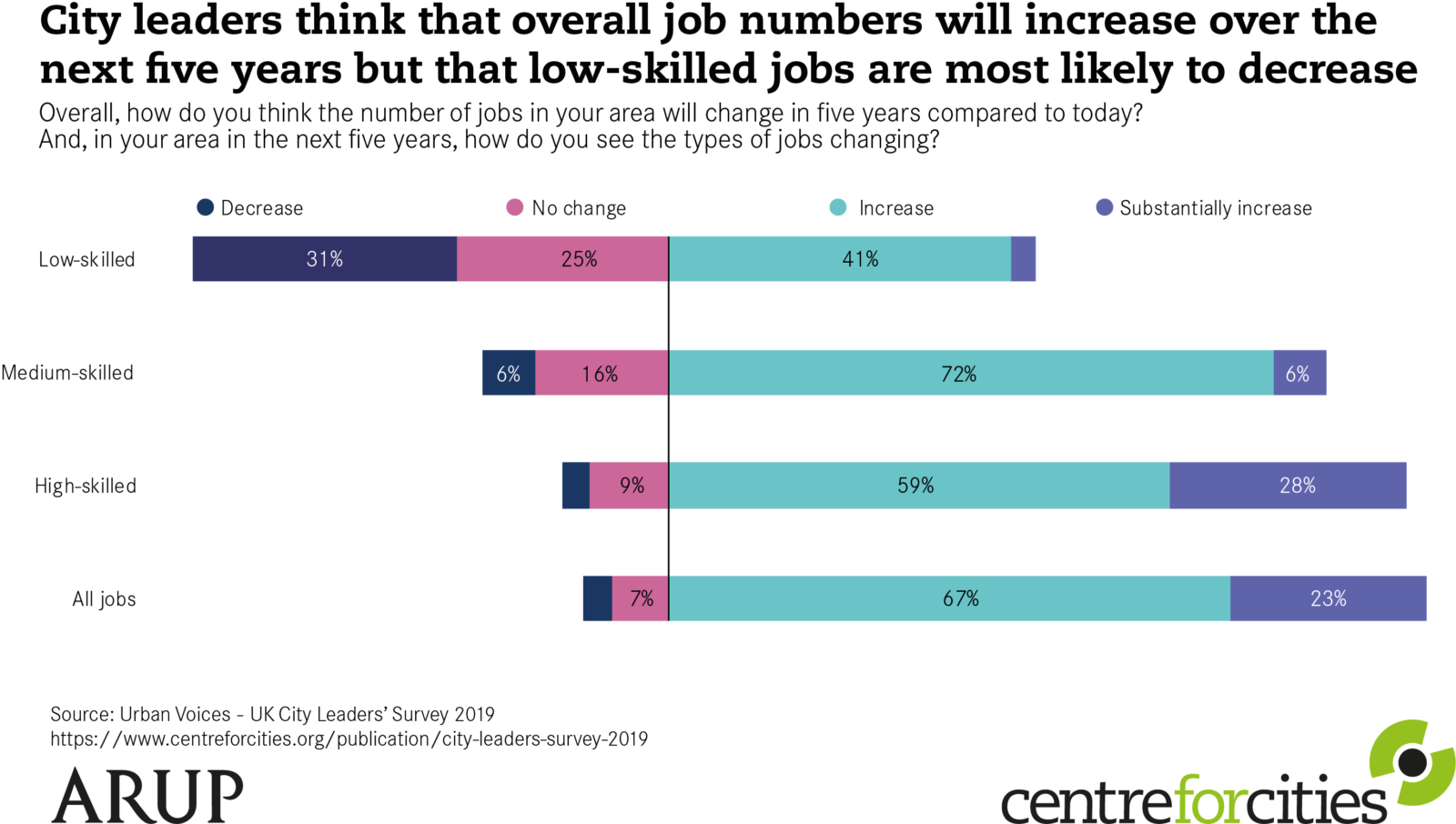 Technology is changing the way businesses work, and Brexit could change the types of jobs we have in the UK. So, we asked city leaders how they thought the types of jobs (by skill level) in their area might change in the coming years. 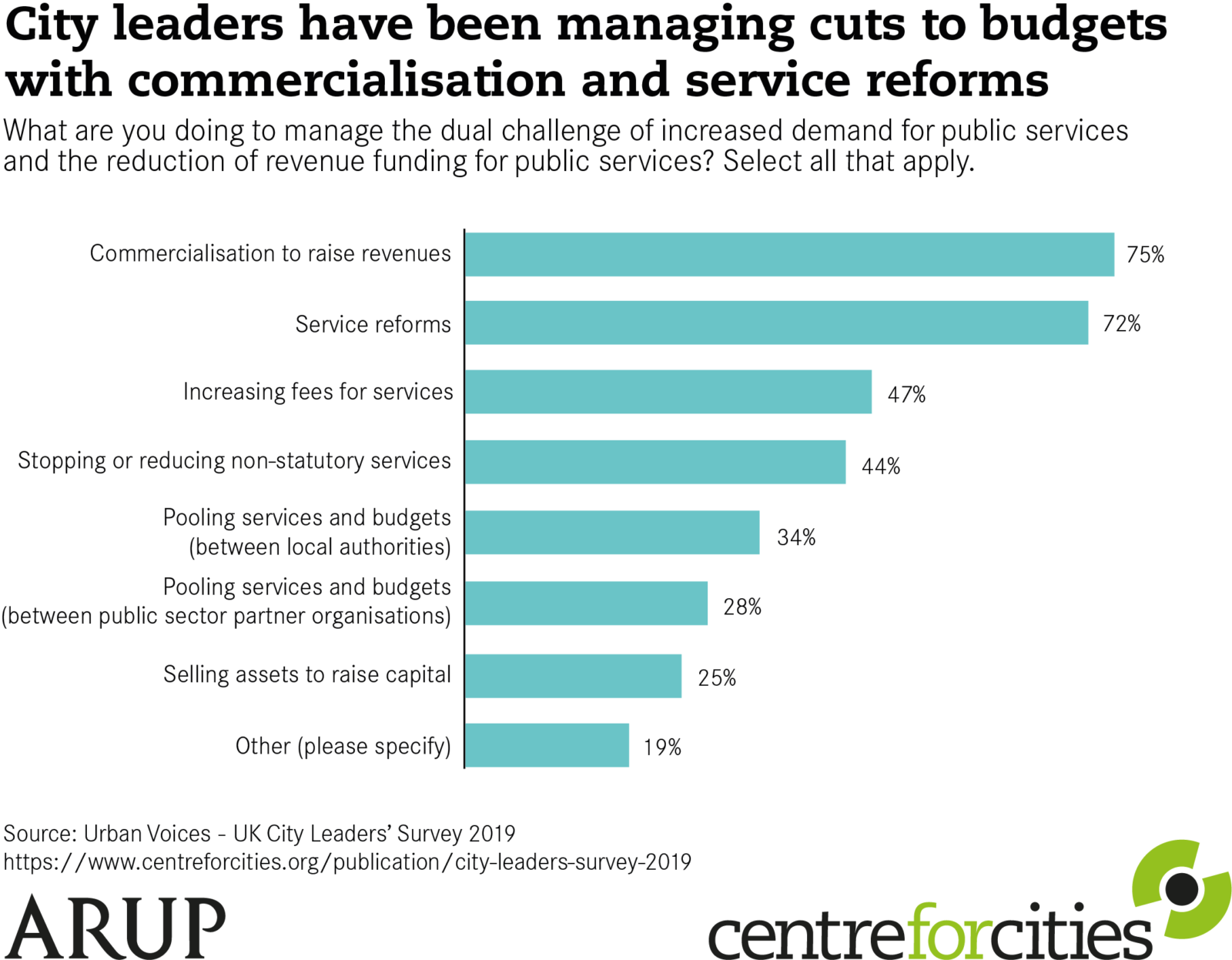 Since 2010, cities have borne a disproportionate amount of funding cuts. Nearly three-quarters (74 per cent) of all local government funding cuts in real-terms (accounting for inflation) have fallen on cities, despite being home to just 54 per cent of the population. Efficiencies have been made, but many areas now find it difficult to provide valuable services due to budget constraints.

Others were pooling services and budgets between public sector partner organisations (28 per cent) and selling assets to raise capital (25 per cent).

Almost one in five (19 per cent) chose “other” ways of coping with public service pressures. Leaders who chose this option mentioned that they are approaching public service challenges with alternative finance models and a focus on efficiency and preventive measures. 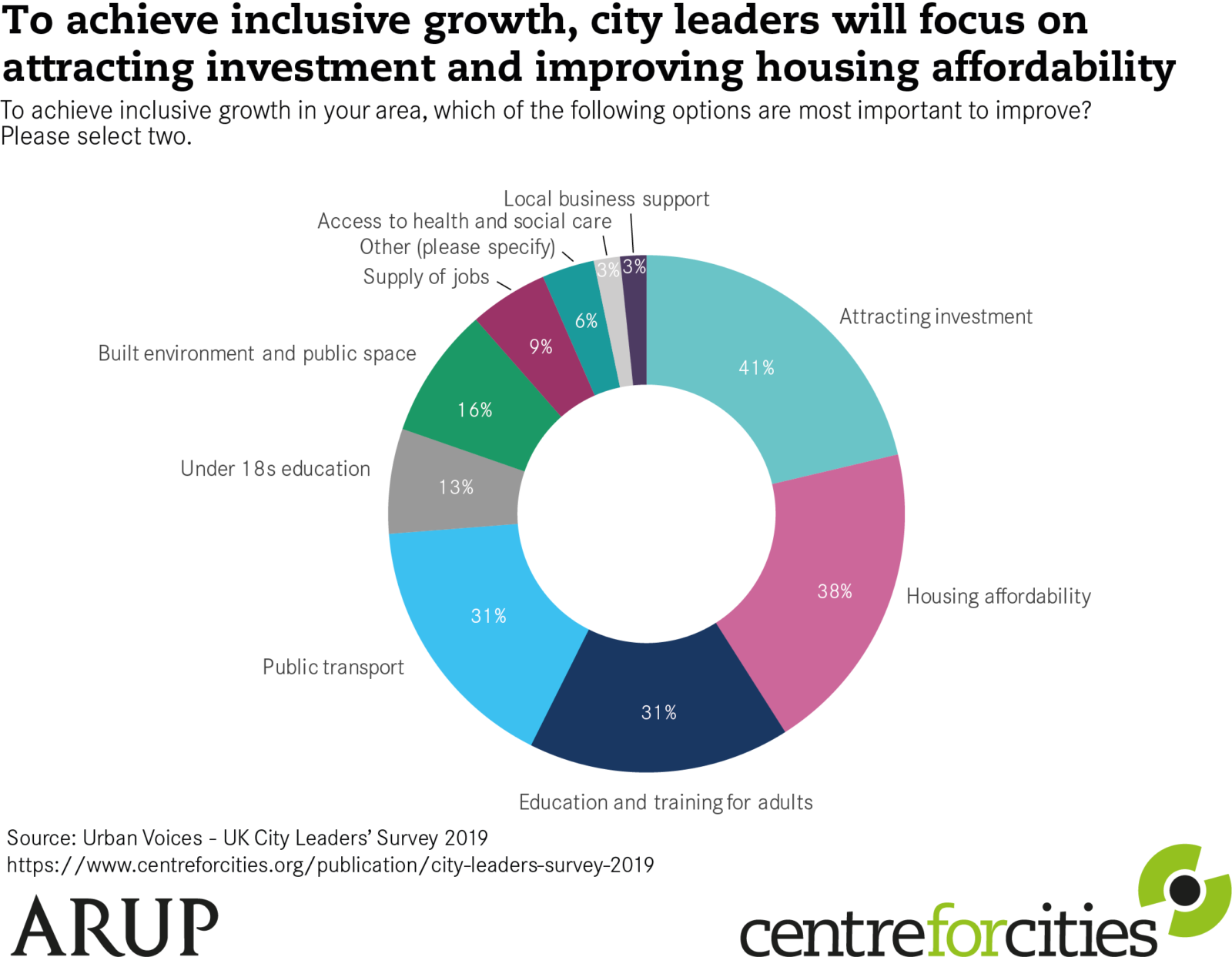 Inclusive growth is the idea that the distribution of the opportunities to benefit from growth in a city are more evenly spread. Many city leaders are considering inclusive growth in their economic development strategies.

Attracting investment is followed by housing affordability (38 per cent), public transport (31 per cent) and education and training for adults (31 per cent) as challenges to not just the levels of growth but how the benefits of that growth are distributed within cities.

Attracting new investment was only identified as a top barrier by about one in four of last year’s respondents. Similarly, local business support and access to health and social care are again perceived as less important than other factors to support inclusive growth. 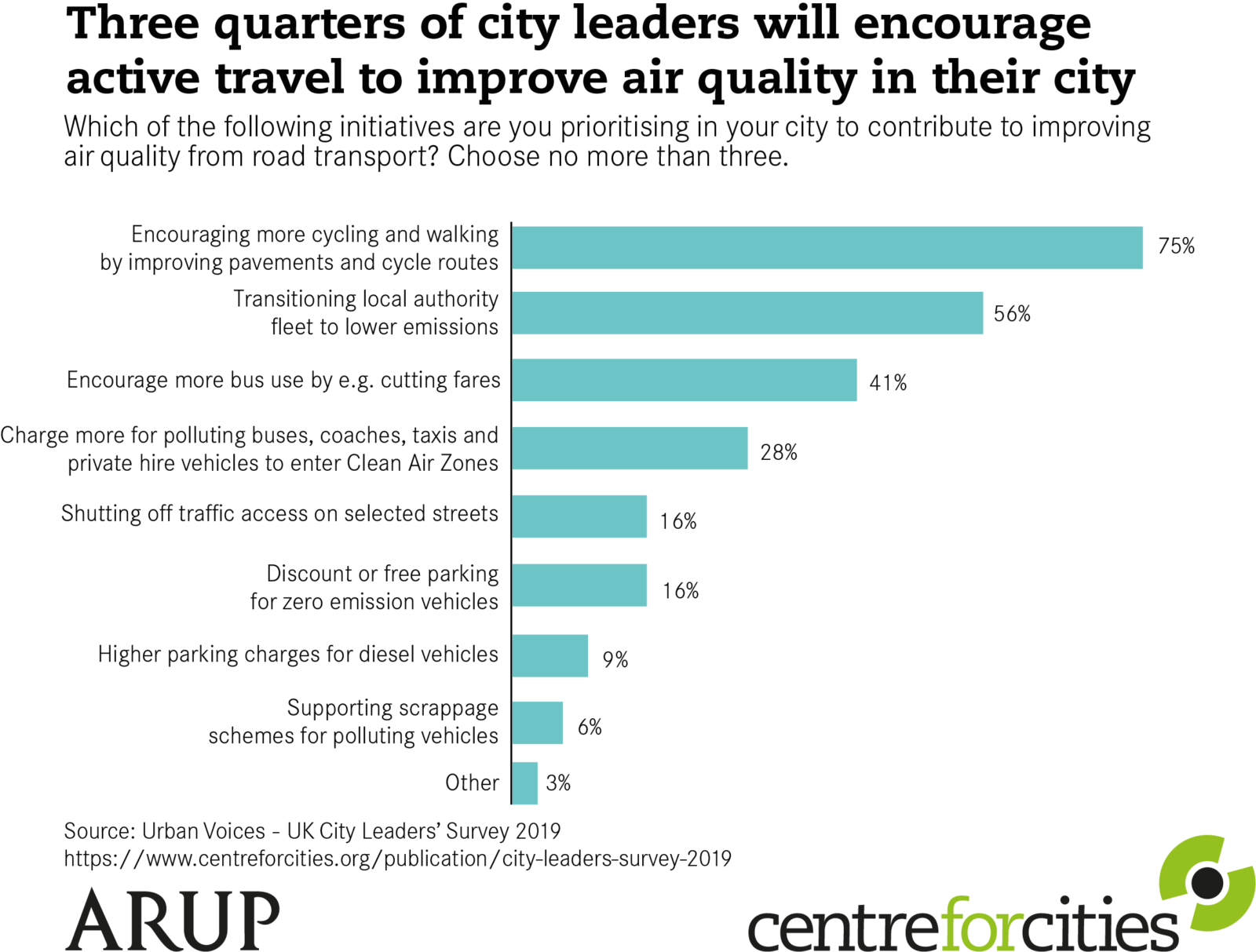 Air quality continues to be a local, national and international policy concern. But in particular, air pollution is an urban issue. According to the World Health Organisation (WHO), more than 80 per cent of people worldwide living in urban areas monitoring air quality are exposed to pollution levels that exceed their ‘safe’ limits1. In the UK, 40 cities and towns are at or have exceeded WHO air pollution limits.

The overwhelming majority of respondents (75 per cent) said that the encouragement of cycling and walking by improving pavements and cycling routes is critical to improve the air quality in their city. More than half (56 per cent) are prioritising reducing emissions from local authority vehicle fleets. Encouragement of bus use ranked third with 41 per cent, highlighting this year’s focus on the development of public transport.

On the other hand, higher parking charges for diesel vehicles and the support of scrappage schemes were only chosen by 9 and 6 per cent, respectively. 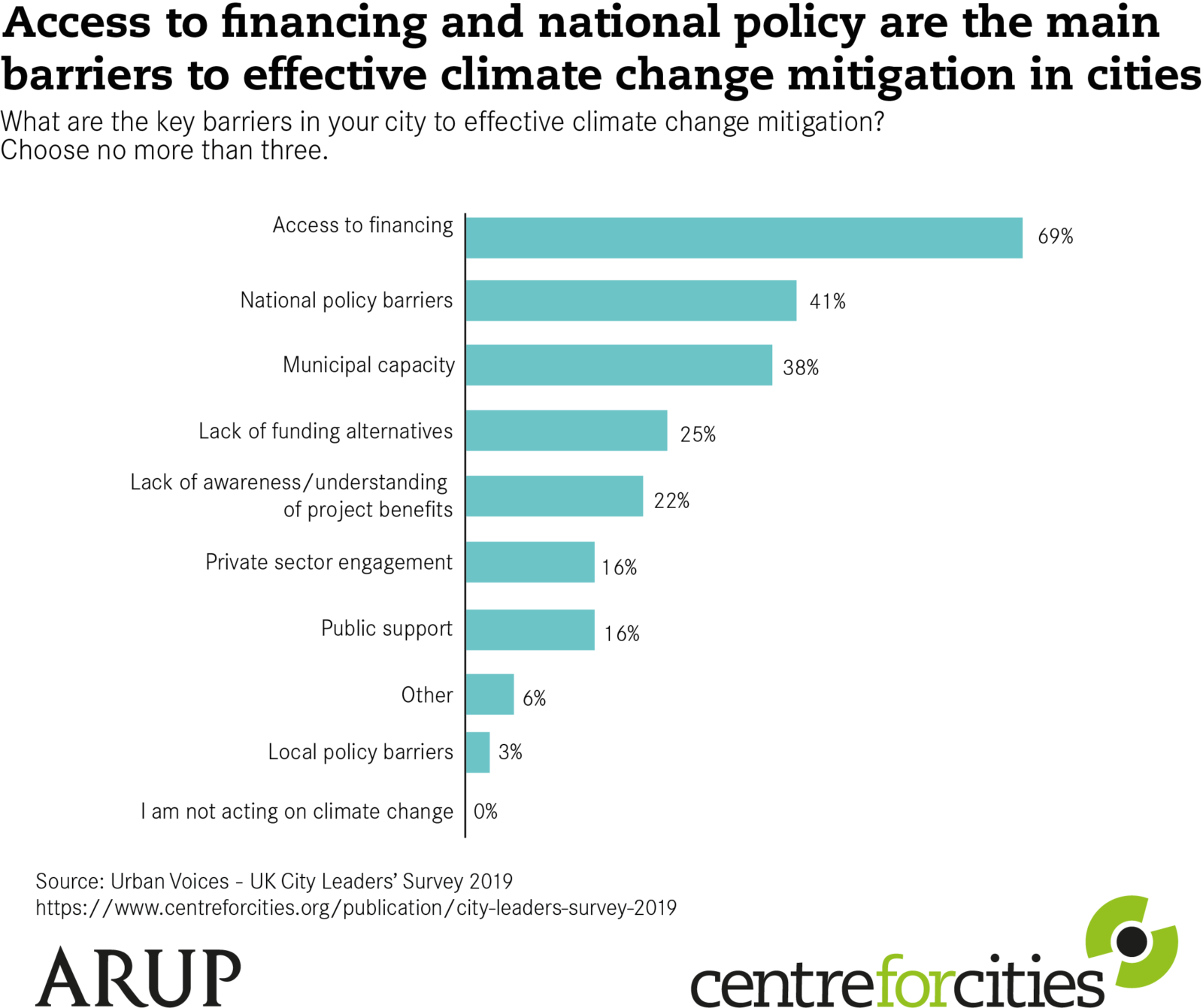 Climate change has gained more prominence in the media over the past year, with groups like Extinction Rebellion making the headlines and the implementation of UN Sustainable Development Goals. In the UK, 65 per cent of all 353 local authorities and eight combined authorities have declared a climate emergency.

Access to financing constitutes a major obstacle to addressing climate change. More than two- thirds (69 per cent) identified access to funding as one key barrier and 41 per cent of respondents highlighted national policy barriers as a significant obstacle in the fight against climate change.

Municipal capacity was chosen by more than one third (38 per cent), indicating the lack of resources at the local level to understand and address climate change. Moreover, a quarter of city leaders regarded the lack of funding alternatives as hampering climate action.