02Why do people live where they do?

Some people have more choice than others when planning where to live. But everyone operates under constraints – and there are both push and pull factors that play into the reasons why a person lives in a certain place (see Box 1).To better understand why people choose to live where they do, and how these preferences differ between places and people, two YouGov surveys were carried out – a national survey across Great Britain, and one across four case study cities, surveying residents from the city centres, suburbs and hinterlands of Manchester, Brighton, Sheffield and Swindon. The main questions asked respondents for the three main reasons why they chose to live in their neighbourhood, and for their three least favourite aspects of the neighbourhood that they live in.

Box 1: Push and pull factors in choosing a residential location

By asking about the reasons why individuals chose to live in the places where they do, we can understand the main constraints on where they live (for instance, those choosing cost of housing as a main reason are most constrained by finance), while asking about people’s least favourite aspects tells us about the important attributes that people are denied by the limited choice available (such as environmental quality and pollution in a city centre). The nature of these constraints tells us something important about their ultimate residential location (i.e., their choice) and what drives it, e.g. their stage of life.

The results showed that people have strong preferences that underpin their residential decisions, which relate both to their age, and to the attributes and amenities that different parts of cities are able to offer.

The cost of housing was the most commonly selected reason for why residents chose to live in their neighbourhood in the national poll (28 per cent of respondents). Being close to friends and family was second (28 per cent), and the size and type of housing available was third (22 per cent). And 21 per cent of respondents chose either being close to their own workplace or to their partner’s workplace as main reasons, suggesting that together, these are also significant drivers of residential location.

Living too far away from friends and family was the most common response given when asked for the least favourite attribute of respondents’ neighbourhoods (15 per cent), and similar numbers criticised the cost of housing available, availability of public transport and their neighbours.

However, these priorities vary according to an individual’s stage of life – which we can see by looking at the age breakdown of these polling results, as shown in Figures 1 and 2.

Figure 1: The main reasons why respondents chose to live in their neighbourhood by age 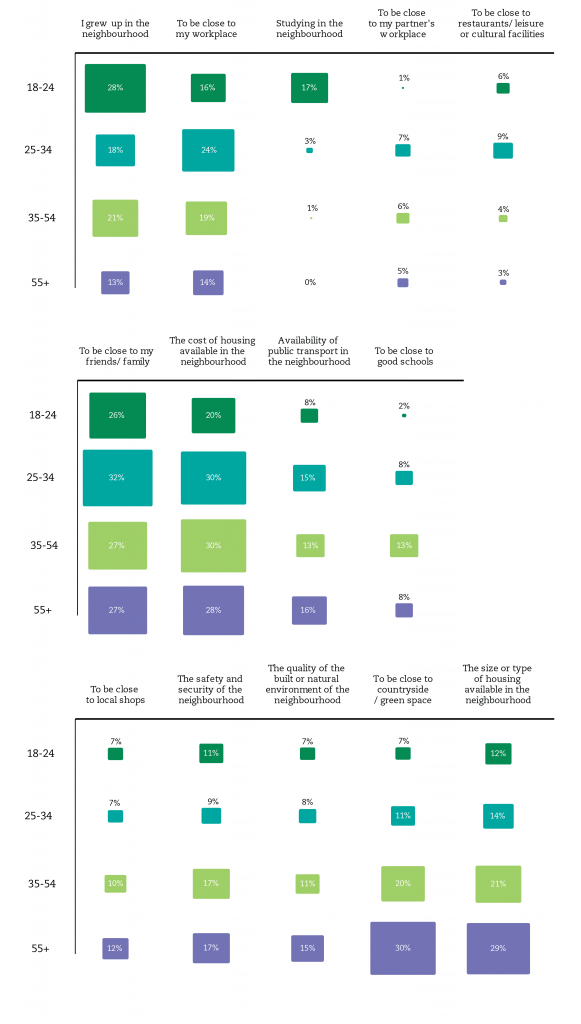 Figure 2: Least favourite characteristics of a neighbourhood by age 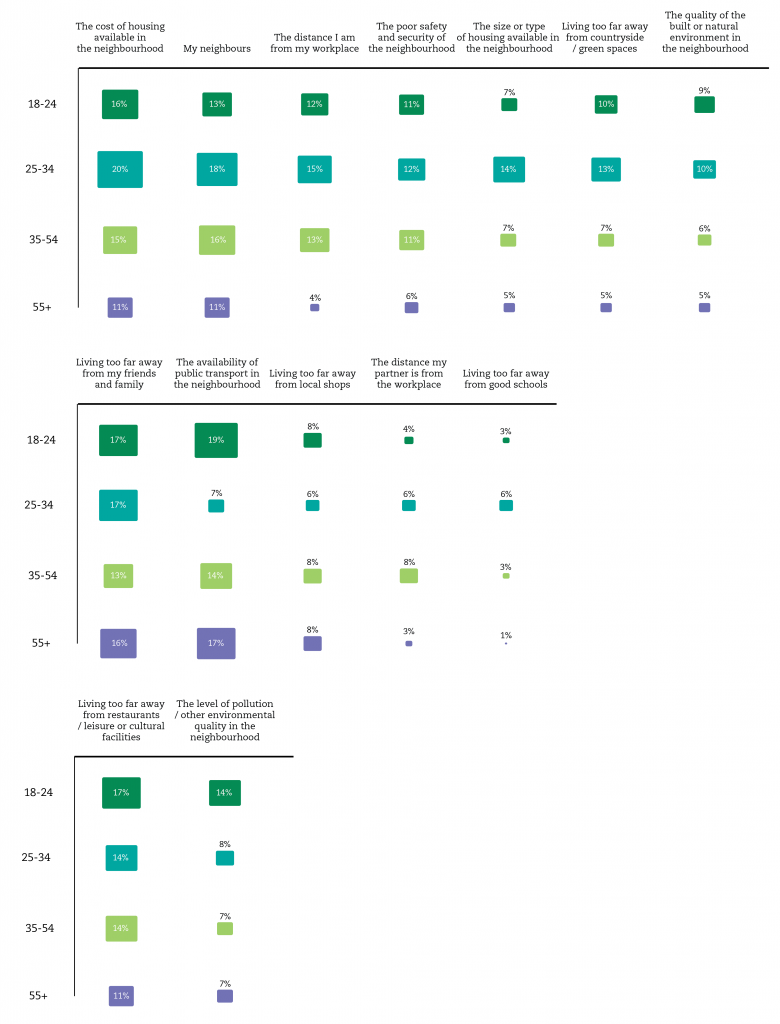 For those aged 25-34, proximity to workplace was a more significant reason than for any other age group (24 per cent), which relates to the greater likelihood of this age group to be working full time than any other group.5 They are also slightly less likely to have responsibilities such as caring for young families or elderly parents than other groups, so rather than valuing more domestic factors – such as size and type of housing – their priorities related to leisure and recreation, with this group choosing proximity to restaurants, leisure and cultural facilities (9 per cent) more than any other age group. But, particularly as a result of increasing property prices which is more likely to affect younger generations,6 they are more financially constrained. This is evidenced by the the large number choosing the cost of housing (30 per cent).

From age 35 onwards, being close to the workplace is less likely to be one of the main reasons why individuals choose to live where they do (19 per cent). Instead, the safety and security of the neighbourhood (17 per cent), being close to good schools (13 per cent), and the size and type of housing (21 per cent) become more significant – factors which relate to the need of young families to have safe environments in which to bring up children. The cost of housing (30 per cent) was a particularly important factor for this age group, indicating the financial constraints brought on by raising a family, while safety and security stood out as one of the most common drawbacks for the 35-44 year olds within the wider age category.

Empty nesters and retirees: over 55s

The two reasons given most commonly by those aged 55 and over, an age group more likely to be retired, and more likely to have non-dependent children, were being close to countryside and green spaces (30 per cent), and the size and type of housing (29 per cent). At this stage in life, when people are more likely to be retired, financial constraints are less significant, suggested by the low number of respondents giving the cost of housing as a drawback. Instead, people prioritise other factors, such as access to the countryside, over the needs brought about by raising a family and needing to be close to the workplace.

The geography of residential preferences

Certain parts of cities have different natural amenities, or are more appropriate locations for certain amenities, than others. As people’s priorities and needs change throughout their lives, these preferences are reflected in a demographic shift across a city-region (see Box 2 which illustrates the case of London) as well as in the preferences given by residents in different parts of the city region, illustrated by the case study city surveys (see Figures 3 and 4).

Box 2: The geography of stage of life: single and married residents across London

Across the city centre, suburbs and hinterland of London, people choose to live in those places that best suit their needs at a particular time in their life. The maps below show how single people are more likely to cluster in central areas, where houses are smaller and they are more likely to rent, but where they can easily access jobs, restaurants, and amenities. Married couples, by contrast, are more likely to locate further out, in suburbs, and particularly in rural hinterlands – reflecting the greater likelihood of these people to have children and to require cheaper housing, as well as bigger homes and proximity to schools and green spaces. 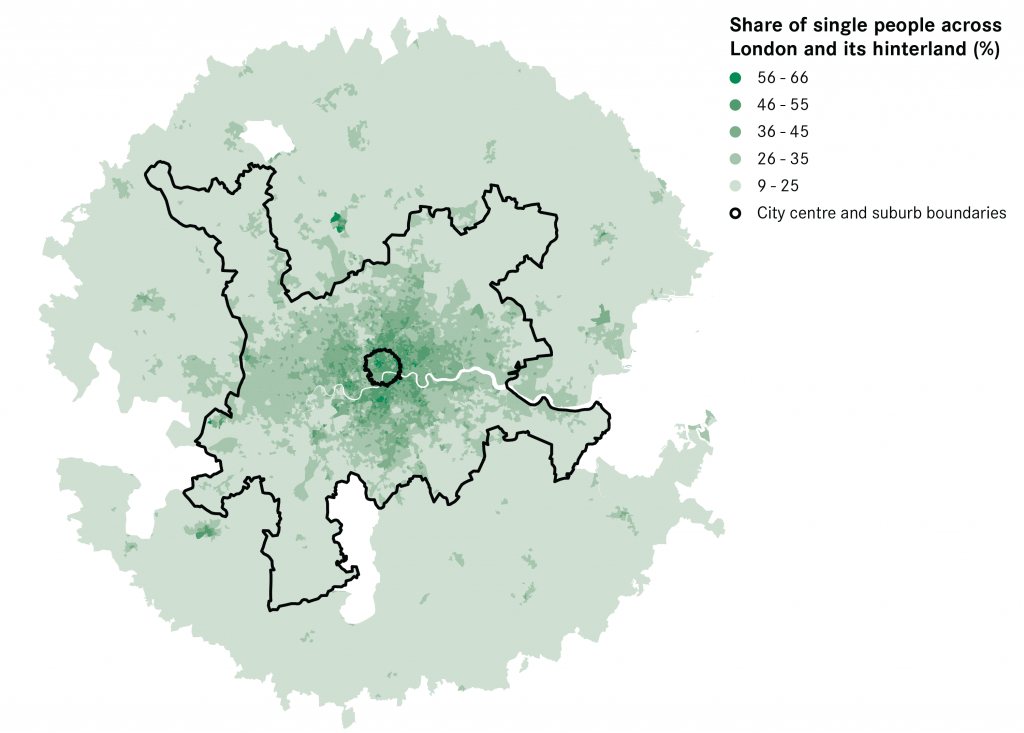 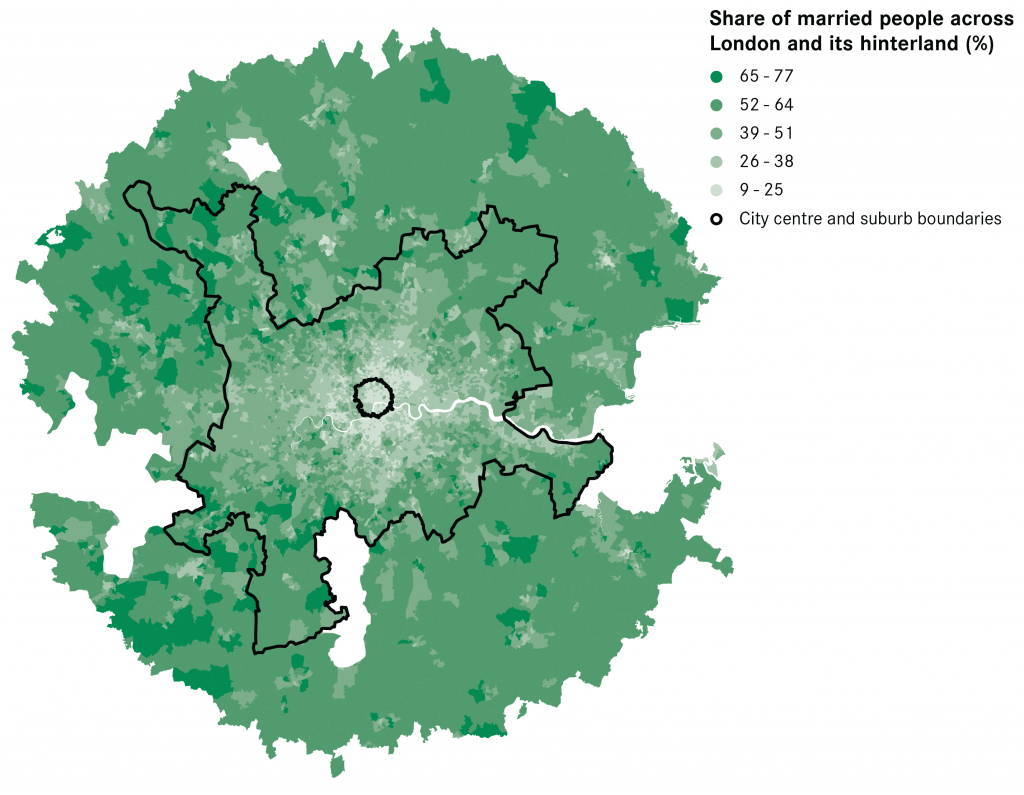 Figure 3: The main reasons why respondents chose to live in their neighbourhood 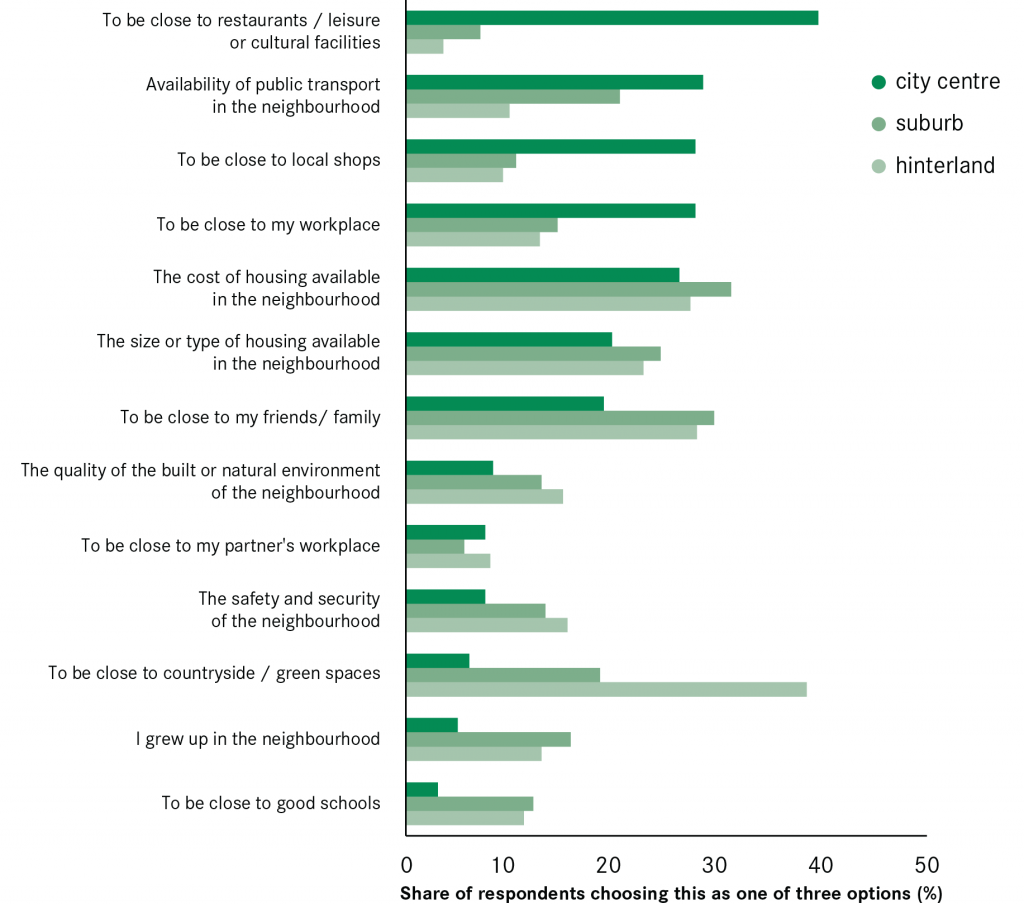 Figure 4: The least favourite things about the neighbourhood that respondents live in 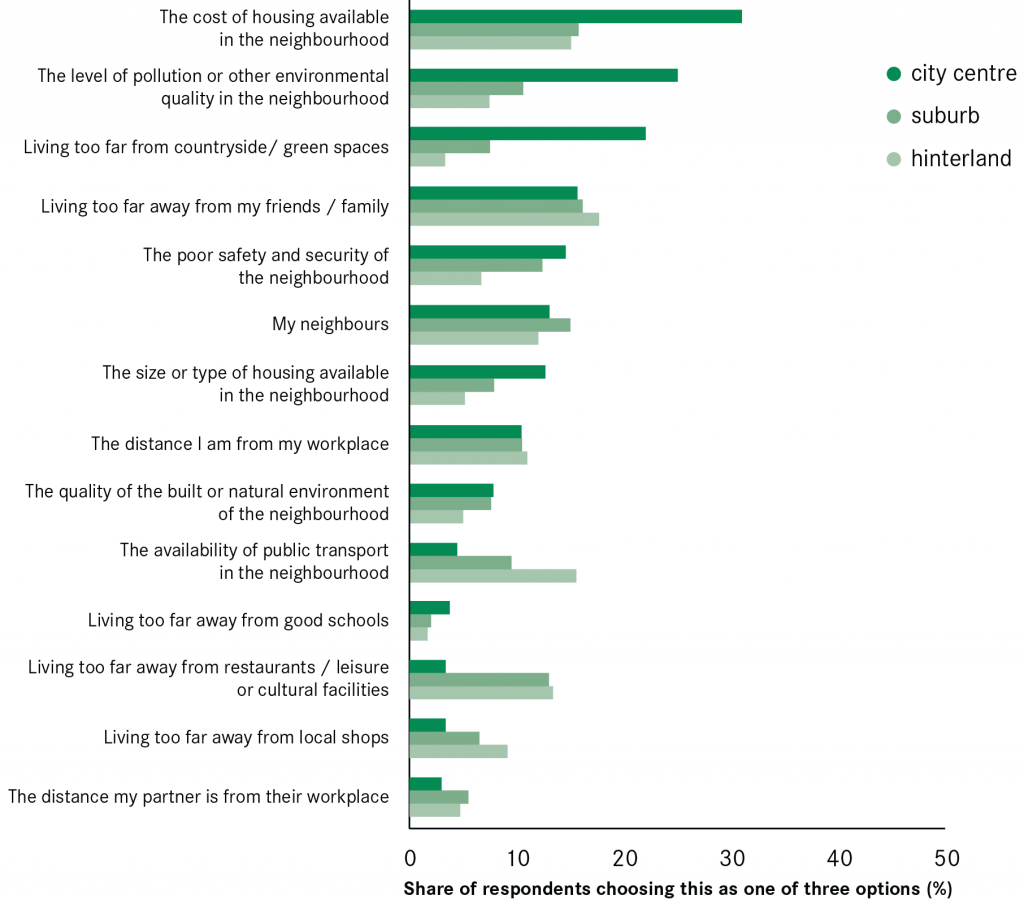 Unlike the national survey, among those surveyed in the city centres of the four case study cities, proximity to restaurants, leisure and cultural facilities (39 per cent) was the most frequently selected reason why residents chose to live there. It was a more important factor than access to local shops (27 per cent) and public transport (28 per cent), although these were significant too. This tells us something about how the young, single, highly qualified people who tend to make up the average city centre demographic prioritise leisure and recreation over everyday amenities, as well as being close to the workplace, which was more important for city centre residents than for any others (27 per cent).7 And although many city centre residents pay a premium to live there, there are some significant drawbacks – the cost of housing (31 per cent), pollution (25 per cent), and the distance of their home from countryside and green spaces (22 per cent), in particular.

Suburbs, as primarily residential parts of cities with a lower density of jobs and activity but with larger houses and more open space, tend to be home to families. Housing was the main reason given by those surveyed for why they chose to live in the suburbs. Both the cost, which was the most selected reason for residents (31 per cent), and the size and type of housing (24 per cent), which was a more pertinent issue in suburbs than in city centres, where residents were willing to make a space sacrifice. Suburban residents were more likely to choose access to good schools (12 per cent) than residents elsewhere, reflecting the needs of residents who are more likely to have children than elsewhere, while proximity to friends and family (29 per cent) was also a more commonly chosen reason for suburban residents.

The rural hinterlands around cities offer much more limited access to recreational amenities or jobs, but offer plentiful countryside and green space. This was significantly more important for those aged over 55 than for any other age group, and was the most commonly selected reason why residents surveyed in rural hinterlands chose to live there (38 per cent). This was traded off against the availability of public transport, which was one of the most commonly selected drawbacks of living in these places (16 per cent), when compared to those surveyed in city centres and suburbs. Although elderly residents tend to have more limited access to a car,8 this was an accepted trade-off for many residents.

The first part of this research series, Urban Demographics: Where people live and work, showed that different parts of cities are home to different types of people, at different stages of their lives. In 2011, city centres, especially in large cities, tended to be made up of students and single young professionals. Suburbs tended to be home to over 30s with children. And in rural hinterlands, a much larger share of residents were over 55.

The polling results suggest that this is because people’s preferences for where they live change as they get older. The amenity offer of city centres aligns more closely to young people’s preferences – with good access to leisure, culture and the workplace. Suburbs provide the space and the houses needed by families. And rural hinterlands offer the access to countryside and green spaces that over 55s have such a strong preference for.

But this movement across the city region, between city centres, suburbs and hinterlands, crosses the local authority boundaries in which housing, transport and public services are typically planned. Recognising how these patterns work across a city region require local authorities to cooperate at a strategic, city-regional level to deliver services in the places where people need them.