This is also likely to mean that demand to live in these city centre will also continue to increase. There are five implications from these patterns:

1. Successful city centres that continue to increase their housing supply will see populations continue to grow

Large cities have experienced an apartment boom in recent years. If housing supply continues to increase in line with demand, then the return to city centre living seen in these places will continue.

Both London and Brighton have seen demand for city centre housing outstrip supply. Not only has this limited the growth of their city centre populations, but it also seems to have altered their demographic profile23 – the older demographic of these two places relative to other city centres suggest that younger people have been priced out. Without an increase in housing other high demand cities are likely so see similar patterns in the future.

In cities where jobs are likely to continue to centralise into the city centre, the demand for city centre living will increase, too. But this increases competition over the use of land in city centres, between office and residential uses. Currently, the policy of Permitted Development Rights, which allows developers to convert office space to residential use without full planning permission,24 means that developers are incentivised to convert offices wherever there is higher demand for residential space. But this threatens the future of office spaces in the cities where demand from knowledge-based businesses for employment space is likely to increase, and could threaten the growth of city centre economies.

Businesses unable to find appropriate office space in the centre will harm the city’s economy as a whole – and with proximity to their workplace as one of the key determinants of why people live in city centres, this in turn will undermine the demand for city centre living, too.

4. The concentration of jobs in city centres is likely to alter the preferences of residents in the suburbs and hinterlands

The concentration of jobs in a city centre means that getting to work via private transport becomes ever less practical. In London, where 30 per cent of jobs are located in its core,25 90 per cent of the people who work in central London (who live either in the city centre, suburbs or hinterland) use public transport, walk or cycle to work.

This has an impact on where people choose to live in London. As Figure 13 shows, access to public transport was a much more frequently chosen reason by Londoners for why they chose to live where they do than elsewhere in Britain.

Figure 13: The main reasons why Londoners choose to live in their neighbourhood 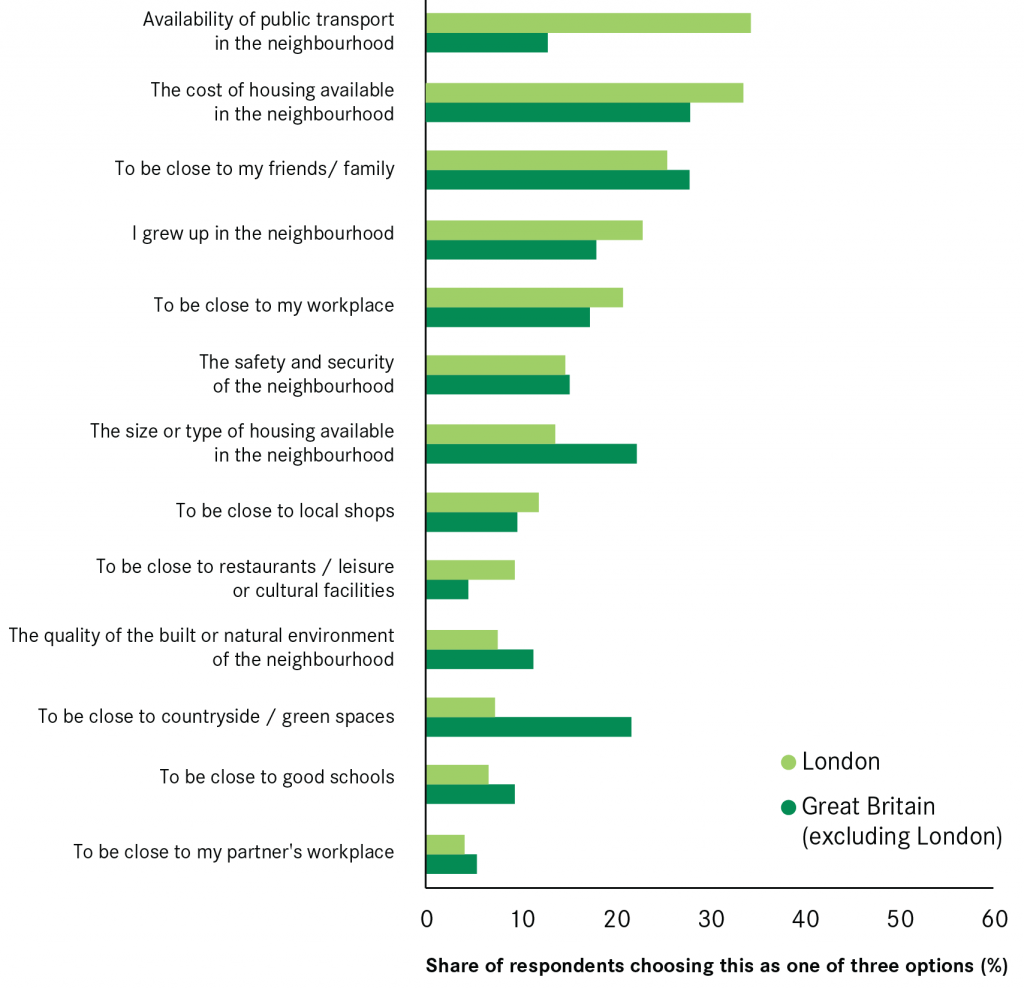 If other city centres develop in the way that central London has in recent years, then the provision of public transport will become a larger factor in why people choose to live where they do – something that is already seen in cities around the UK, where transport strategies such as the expansion of the Metrolink tram network in Manchester26 and the extension of the Nottingham Express Transit27 illustrate the increasing importance of good rapid transit between growing suburbs and city centres.

5. Without improving their city centre economies, many small and medium sized cities are unlikely to see a substantial increase in city centre living

In small and medium sized cities such as Swindon, which have seen slower city centre population growth, the future of city centre living will depend more on whether these cities are able to support jobs growth in their city centres, rather than across the city. Currently, people are attracted to live there because of cheaper housing. But in fast-growing city centres, it has been access to jobs, as well as their recreational and cultural offer, the types of housing available, and the quality of the built environment, that have driven population growth. Physical regeneration strategies that do not also address the geography of the economy are unlikely to have a long-term effect on their city centre populations.