05The nature of the new graduate workforce

The ability of a place to attract degree holders from other parts of the country depends on the economic opportunities that it provides for highly-skilled workers. This section looks at the characteristics of the new graduate labour market in Birmingham.

Figure 19 brings together all the graduates who decided to work in Birmingham on graduation to provide an overview of the nature of the graduate workforce. The largest share is represented by ‘home-grown’ graduates. This is higher than the figure for the UK as a whole and the second highest share among UK cities, after Middlesbrough. 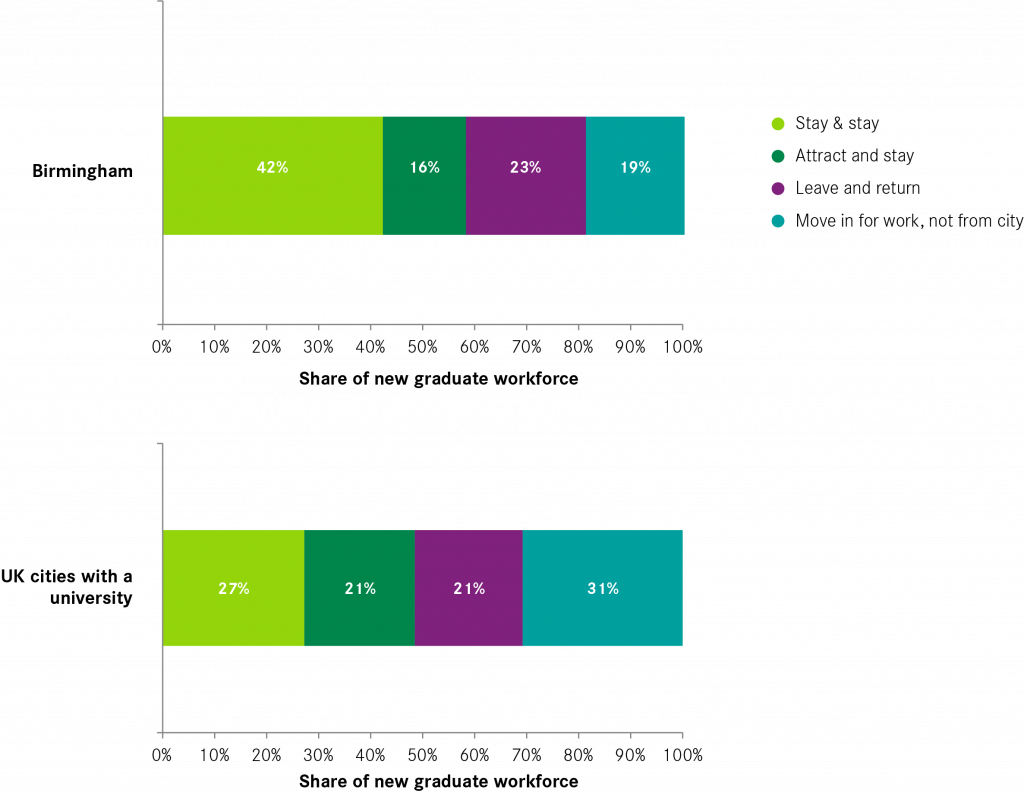 Graduates working in Birmingham earn on average £21,750 and this is below the mean UK graduate wage of £23,100. But while wages can play a role in the graduates’ decision of where to work, research shows that it is the job opportunities and career progression that matter the most: cities that gained the largest number of graduates were the ones with a high share of KIBS jobs.4 So this figure should not have much impact on the city’s ability to attract graduate workers.

And better job opportunities seems to be the reason why many graduates leave Birmingham after graduation. When we look at the sector breakdown of Birmingham’s graduates who left after university the share of new graduates working elsewhere in KIBS is higher than that of those who work in Birmingham, as shown in Figure 22.

If the number of new graduate opportunities in KIBS is to increase in Birmingham, it’s likely that the city centre will play a central role. In terms of all new graduate jobs, the B15 postcode (which is home to the University of Birmingham and the Queen Elizabeth hospital), was home to the highest share of all new graduate jobs. But the B1 and B3 postcodes were home to more than a third of all KIBS jobs. This reflects the trend seen in recent years of an increasing concentration of KIBS jobs both in Birmingham city centre and other successful city centres in Britain in recent years.5

This has occurred because of the particular benefits that city centres offer – namely access to large numbers of skilled workers and other higher-skilled businesses, be they clients, collaborators or competitors. As the UK continues to specialise in these types of activity, city centres are likely to play an ever larger role in the national economy.

Looking at the new graduates working in Birmingham reveals that: