This section compares the educational attainment of Birmingham’s population with the national average and other UK cities.

The skills profile of Birmingham’s resident population has been a reason of concern for its economy. In 2016, the city had a lower share of people with high-level qualifications (NVQ4+) than the Great Britain average (28 per cent versus 38 per cent), as shown in Figure 1. This is the 15th lowest among UK cities. Keeping everything else constant, to close the gap with the rest of the country, Birmingham would need an extra 153,430 degree holders in its economy.

When we look at this indicator over time, the share of people with this type of qualifications has increased by 7.5 percentage points since 2006. While this is a positive development, this increase is lower than the UK average for the same period — 10.6 percentage points — suggesting that the gap has become wider in recent years.

Looking at the other side of the skills spectrum, its share of people with no qualifications –16 per cent — is twice the GB average of 8 per cent, and this is the highest among UK cities. This has fallen over the past 10 years by 4.9 percentage points but again this decrease is lower than the national average (5.8 percentage points). 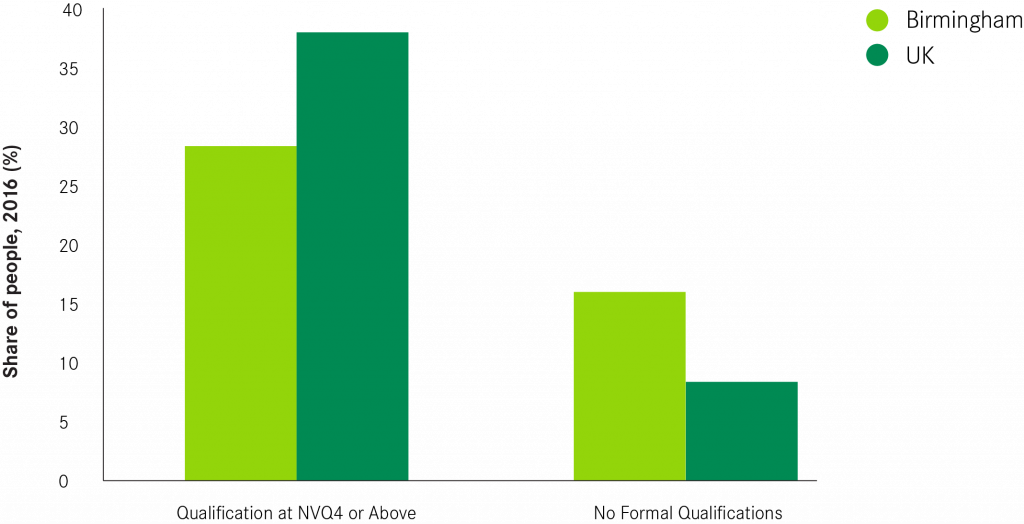 That employment rates differ according to the qualification level comes as no surprise. What is more interesting is that all skills groups in Birmingham are less likely to be in work than in the rest of Great Britain, including degree holders. This suggests that there might be issues with the way the local labour market operates. It could mean that skilled workers are not able to access jobs that match their skills because of information problems. But it might also mean that there is not enough demand for this level of skills in the local economy. This suggests that upskilling people is likely to be insufficient and highlights the need for the appropriate mix of supply and demand-side interventions. 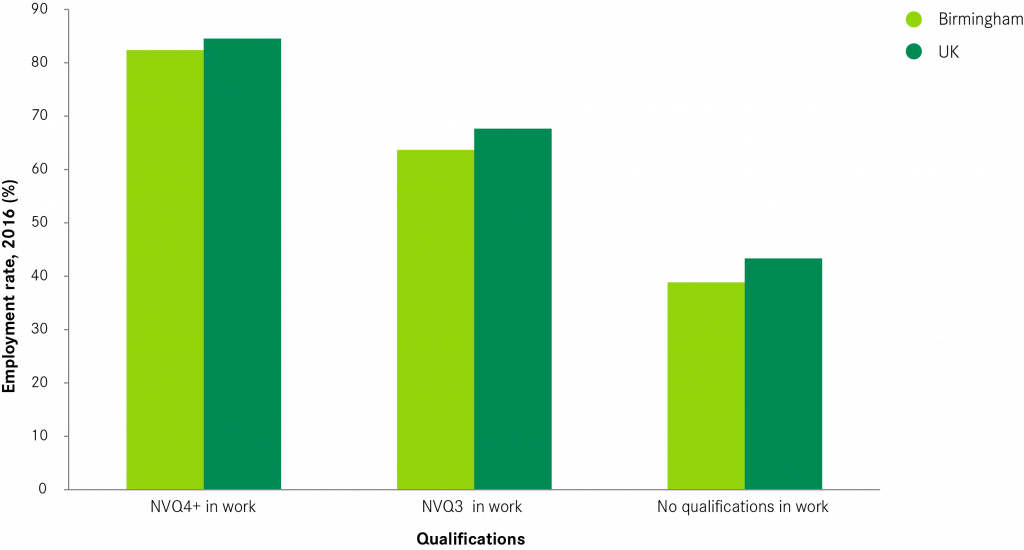 Looking at the share of people with a university qualification or equivalent by age groups reveals that all age groups underperform when compared with their counterparts in the rest of the country. But Figure 3 shows that the gap is smallest for the youngest age group with older people lagging further behind.

Figure 3: Share of residents with a university degree, by age group, 2016 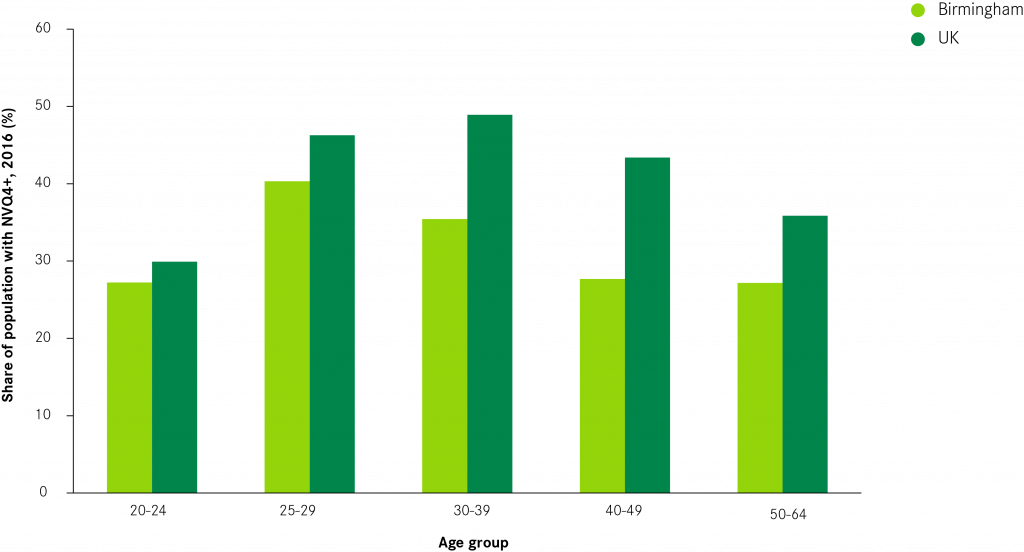 Figure 4: Share of residents with no qualifications, by age group, 2016 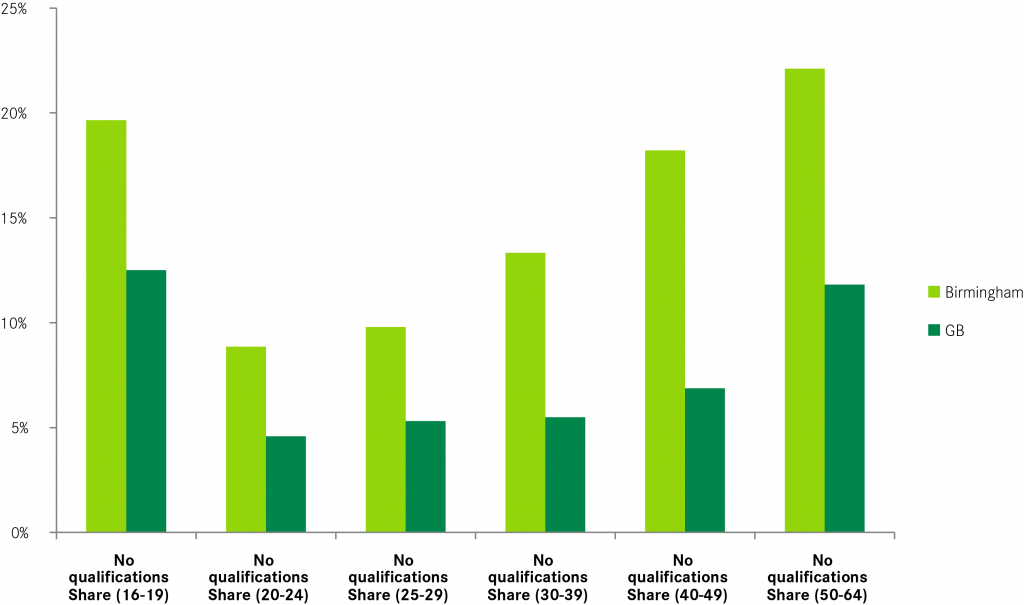 Despite the weaker qualifications levels of older age groups, it is younger people in Birmingham who appear to find it hardest to get on the job ladder. Figure 5 shows the employment rate by different age groups. People in the 35–49 age group are the most likely to be in work, although like all other age groups it trails the national average. The gap between Birmingham and the UK is most significant for those aged 20 to 24, followed by those in the 16–19 age group. When compared to other cities, the employment rates for these two age groups are the 8th and 5th lowest, respectively. 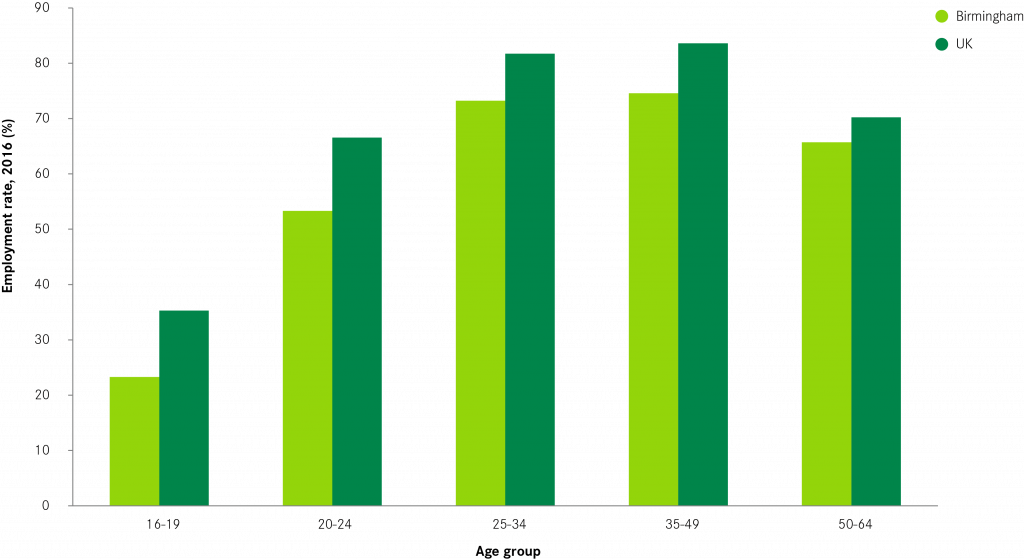 The skills issue does not only concern Birmingham’s working age population. A gap with the rest of the country is also seen during school years. Figure 6 shows that the share of pupils living in Birmingham obtaining 5+ A*-C GCSEs including English and Maths — 53 per cent — is lower than the average for England – 58 per cent. This too has improved over the past 10 years: in 2006-2007, just 40 per cent of Birmingham’s pupils achieved these grades. However the gap with the rest of England has remained the same.

Continuing to improve school performance is important for two reasons. At the individual level, research shows that there is a strong link between the performance at GCSEs in English and Maths and the job prospects of an individual. At the local economy level, educational attainment seems to affect the youth claimant rate of a place, with higher unemployment in places where school performance is weaker.1 In this context, the performance of pupils in Birmingham helps explain the lower employment rate of younger people discussed above. 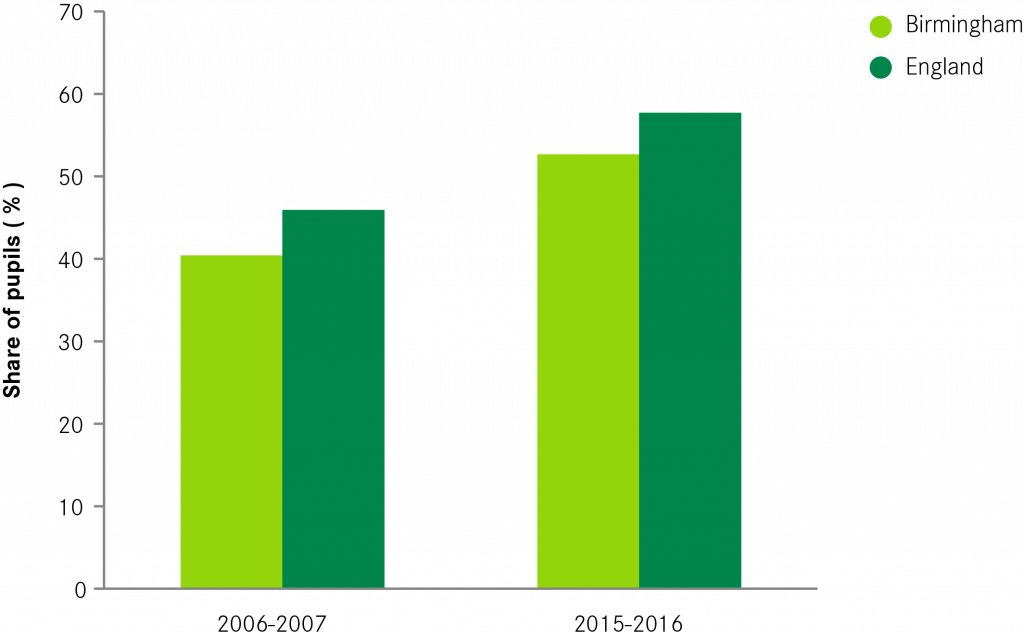 Despite this, participation in further and higher education is high

However, underachievement at GCSE level does not appear to stop young people from entering Further and Higher Education. Figure 7 shows that 83 per cent of the 16 to17-year-olds living in Birmingham are either in full-time education or training and this is the same as the figure for England. Meanwhile 7 per cent of the people in this age group are not in education, employment or training (NEET) and this is greater than the national average — 6 per cent. It is also comparable to Manchester’s share of NEETs — 7 per cent — and is lower than the 10 per cent in Liverpool. 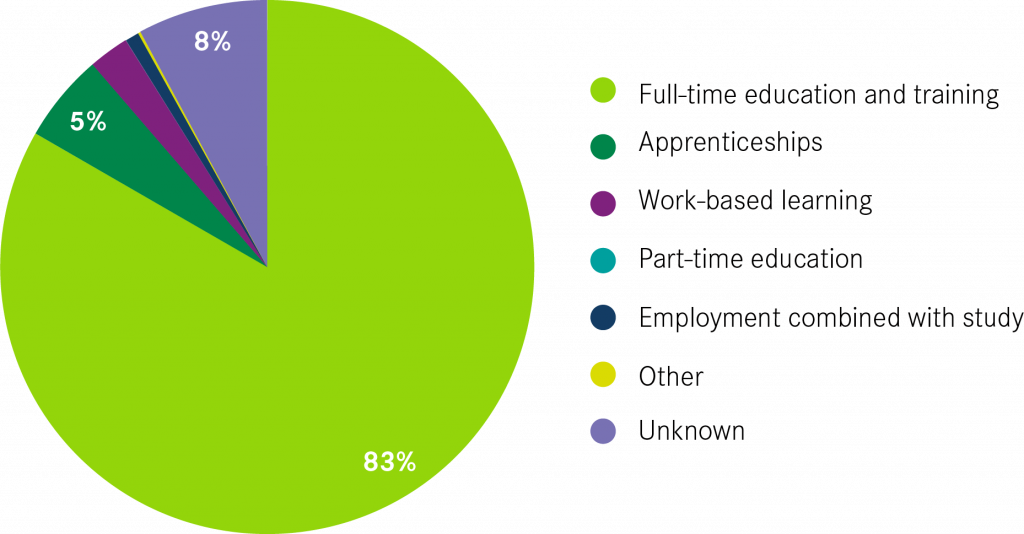 Looking at how likely young people are to go to a higher education institution shows that in Birmingham, 34 per cent of those aged 18–19 between 2009 and 2015 went to university and this is below the national average — 38 per cent. Cambridge and London had the highest rates with 58 and 49 per cent respectively.

Looking at apprenticeship starts by type and age groups shows that the picture in Birmingham is not so different from the national one. The majority of apprenticeships in the city — 63 per cent — is of intermediate level and this is slightly higher than the share for England (see Figure 8). When we look at age groups, the largest share of apprenticeships — 46 per cent — are for those over 25 and this is also higher than the figure for England. While this is a positive, as it improves the skills level of the population overall, apprenticeships do not currently appear to be providing a clear alternative to the academic route as they do not target the group for which they were designed, those looking for an alternative to university at 18. This isn’t just a Birmingham issue, it is also the case at the national level.

Figure 8: Apprenticeship starts in Birmingham, by levels and age groups, 2015 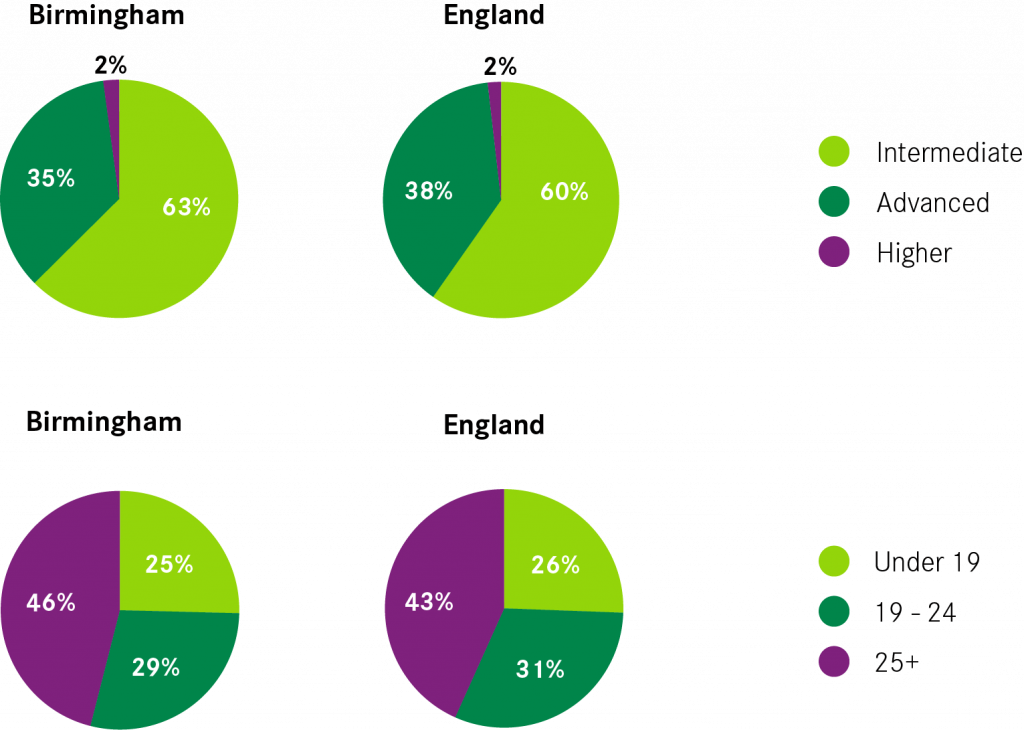 Looking at the demand for labour shows that that the skills patterns are reflected in the city’s labour market and industrial structure.

Figure 9 shows that Birmingham has a lower share of workers in high-skilled jobs and a higher share in low-skilled ones than the UK average.

Looking at knowledge-intensive businesses services (KIBS), with 12 per cent, its share is lower than the national average —14 per cent. Comparing Birmingham with other cities, its share of KIBS jobs is lower than Manchester —15 per cent — but higher than Liverpool — 11 per cent. Publicly funded services, at 27 per cent, is one of the largest employers in the city. 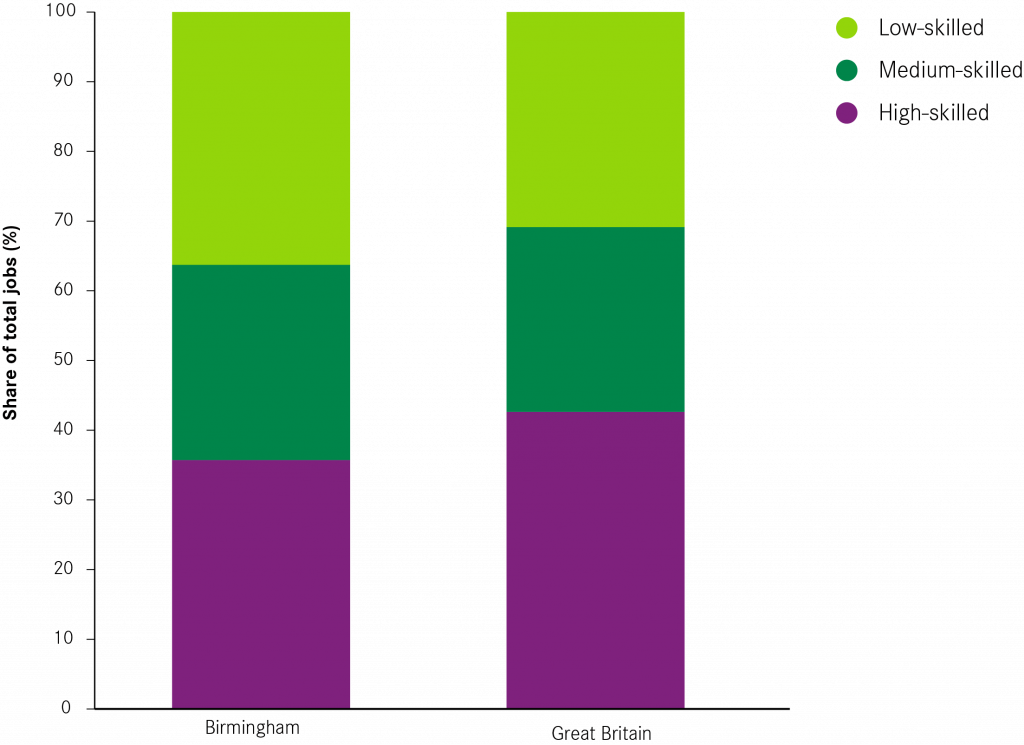 With regards to skills, Birmingham underperforms when compared to the rest of the country. Looking at the skills profile of its population shows that:

Improving the skills of its existing population will be crucial in closing Birmingham’s skills gap with other cities. But attracting skilled workers from other parts of the country will also play an important role. This is what the next section looks at.