In the wake of the EU referendum result, encouraging economic growth right across the country has been put front and centre of Theresa May’s ambitions for her premiership. The new prime minister has called for a “plan to drive growth up and down the country – from rural areas to our great cities”.3 And it appears that a new approach to industrial policy will form the central plank of approaches to achieve this.

For this to happen, all areas of the country will need to provide the conditions for business investment, either from indigenous companies looking to set up or expand, or from those located elsewhere in the country or overseas.

In particular, they will need to create conditions that attract investment from ‘exporting’ businesses, which export either to a regional, national or international market. Attracting these businesses is crucial for three reasons. Firstly, they bring in income to an area through the selling of their products elsewhere. Secondly, they drive productivity growth in an area, being best able to make the most of new innovations. And thirdly, they both create and drive up the wages of jobs in local service sectors, known as the ‘multiplier effect’.4 So while they make up a relatively small part of the economy themselves, they have an important indirect effect on other parts of a local economy.

Because they serve regional, national or international markets, these businesses could choose to locate anywhere, from the centre of London to the middle of the Highlands. But it is clear from any walk around a city centre, drive along a motorway or view from the window of an intercity rail journey that they do not. This suggests that different parts of the country have very different appeals to certain types of business. And it has implications for political aspirations to encourage growth across the nation.

To make the most of each place, we need to understand the different roles they play in the national economy. This report does this by splitting Britain into four areas – city centres, suburbs, hinterlands and rural areas (see Figure 1) – and considers what their varying roles mean for industrial and wider economic policy. It presents five findings on the geography of businesses across the four areas, offers reasons for why these geographic patterns occur, and offers policy reflections on what this means for the new government’s commitment to encourage growth across the country.

This research paper is the first of two papers in this series. The second, to be released later this year, will look in more detail at why businesses choose to locate in some cities over others. 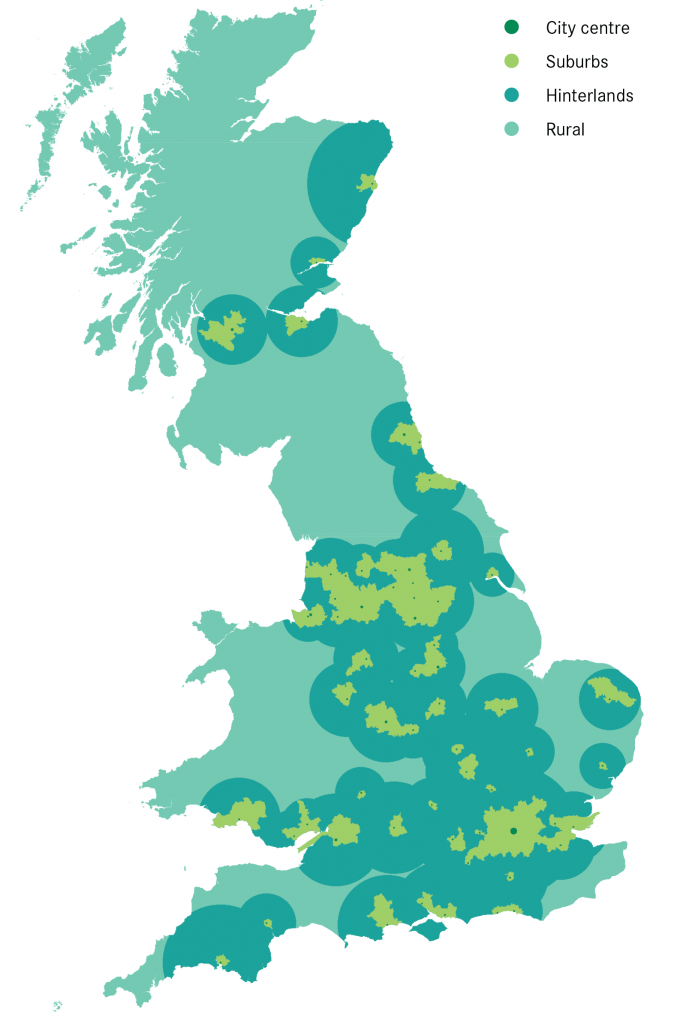 The analysis in this report splits Britain into four areas: city centres, suburbs, hinterlands and rural areas. Cities are split into two areas – city centres and suburbs – because of the different role that previous work by Centre for Cities suggests that they play.5 Non-city areas are also split into two – hinterlands and rural – to investigate whether they too play differing roles:

The rural areas make up the remaining part of the physical landmass of Britain and fall outside of the travel catchment of cities.