04Businesses locate where they do because of agglomeration

The patterns of business location seen across Britain can be explained by agglomeration. Agglomeration is the process by which concentrating economic activity in one place makes businesses more productive. It works through three main channels:12

The combination of these factors helps explain why 52 per cent of Britain’s 2.5 million private sector businesses, and 59 per cent of the country’s 21 million private sector jobs, cluster in cities; and why the urban economy plays a much larger role in the national economy than the rural one. It also helps explain why we see the differences set out above between different types of businesses in terms of the location decisions that they make.

Some businesses benefit to a much greater extent from knowledge spillovers than others. Because of the non-routine nature of their work, high-skilled, knowledge-focused businesses are the ones that benefit from the access to knowledge that a city location offers.13 And this knowledge is most easily accessible in dense areas.14 This is why, even though they could in theory locate anywhere, services exporters show a preference for a city centre location – their location is in part driven by where they can access knowledge.

Of course, businesses who locate in city centres pay a premium to be located there. Using rateable values as a proxy, Figure 9 shows city centres on average to be almost three-and-a-half times more expensive than rural areas. This means that the benefit of a city centre location for those who locate there must offset the higher costs of doing so.

Figure 9: Trade-offs firms consider when deciding where to locate 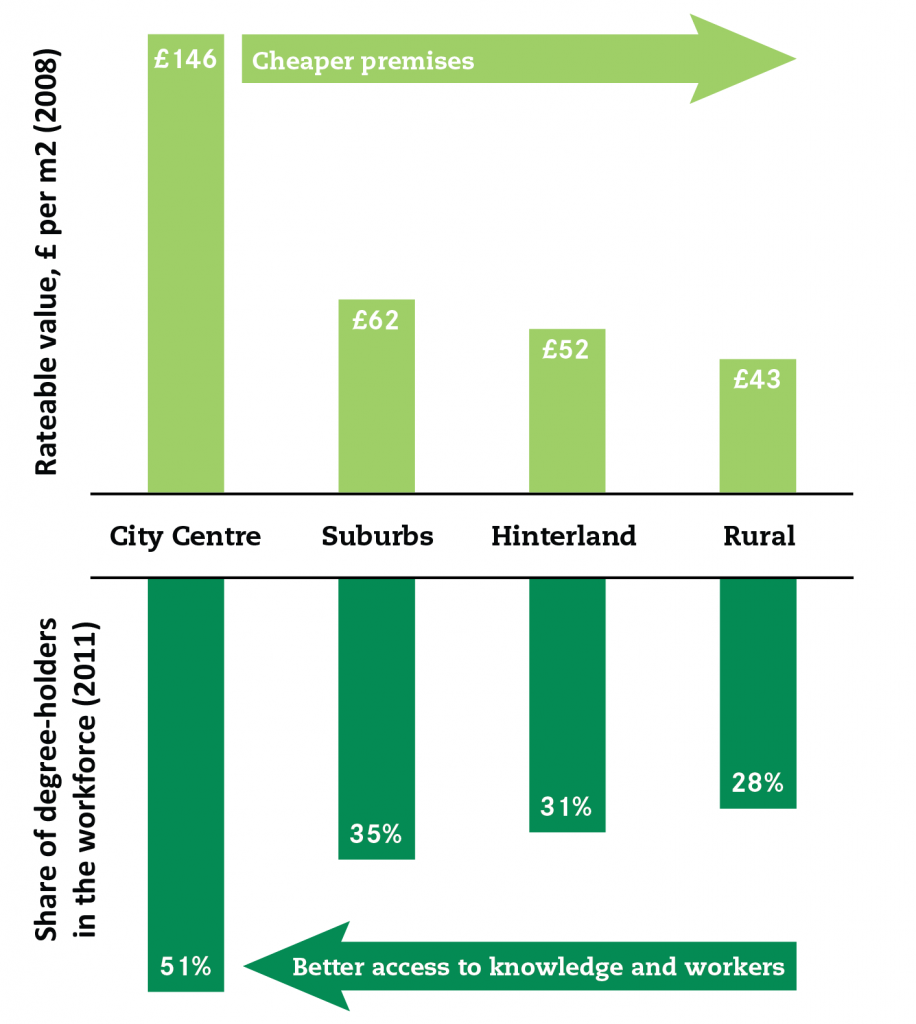 Lower-skilled, more-routinised businesses, such as call centres and more traditional manufacturers, have much less need to access knowledge.15 For this reason, more expensive city centre accommodation offers little appeal for them. That said, agglomeration is still important to these businesses, particularly in terms of recruitment. This helps explain why we see a differentiation in terms of where manufacturers locate, with larger firms tending to locate in the suburbs because of the greater access to workers that it gives them. In this instance they have chosen to more expensive premises to improve their access to workers.16

It also helps to explain why not all high-skilled services exporters locate in cities. As Figure 10 showed above, those services-exporting businesses that locate in the hinterland or rural economy tend to be much smaller than those in cities, meaning that having access to deep pools of workers becomes less important. But it does also mean that they do not benefit from knowledge spillovers, which may make them less productive as a result.17 Unfortunately we do not have the data to look at this.

The make-up of the export base of Britain has gone through big changes since 1998. Figure 10 shows that in terms of businesses and employment, the goods-exporting sector has declined across all areas, with sharpest decline in cities. Meanwhile the services-exporting sector has grown across all four geographies, with the strongest growth in the suburbs.

Figure 10: Percentage change in the number of businesses and jobs by industry across four geographies, 1998-2015

While the growth of service exporters was lower in city centres than in suburbs and hinterlands, it is likely that given what we know about the occupations found in city centres as a result of agglomeration, a greater proportion of city centre growth would have been in higher-skilled, services-exporting occupations. Data limitations mean that we have been unable to measure this.

City centres were also the only geography to see their export base expand in employment terms over the period – all other areas saw a contraction. This partly reflects the much smaller goods-exporting base present in city centres in 1998, so meaning that in absolute terms the number of job losses they had to offset was smaller. The result was that the export base of Britain has become more concentrated in city centres since 1998 (see Figure 11). 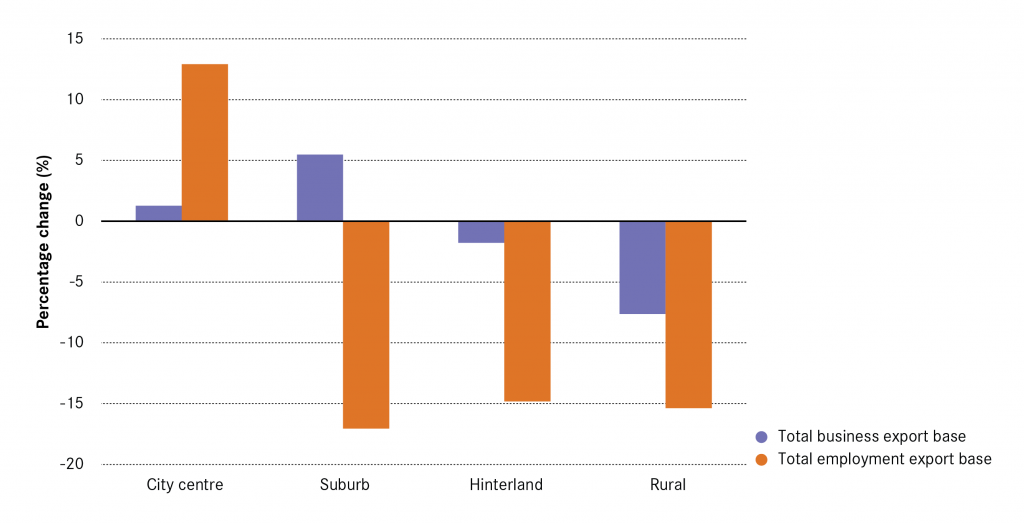 Overall, this data also suggests that the export base for Britain as a whole, in terms of businesses and jobs, contracted over the period. This is a surprising result, and could be down to increases in productivity seen in exporting sectors. Since 1990, productivity has more than doubled in the manufacture of computer and electrical equipment and information and communications, and has almost tripled in chemicals and pharmaceuticals. By way of comparison, it has increased by just 0.7 per cent in food and accommodation, and has declined in real estate and arts, entertainment and recreation (all local services).18