04Factors that shape the nature of the export base in cities

This section explores how the place-based characteristics that enable agglomeration economies – the quality and size of the labour pool, density and proximity to markets – are likely to have impacted on the nature of the export base across city centres and suburbs.

Cities that offer better access to lots of high-skilled workers tend to have a larger and more highly-skilled export base – both in city centres and suburbs. This means that investment in skills and the infrastructure that improves businesses’ access to skilled workers (i.e. housing and transport) will play an important role in growing the export base. 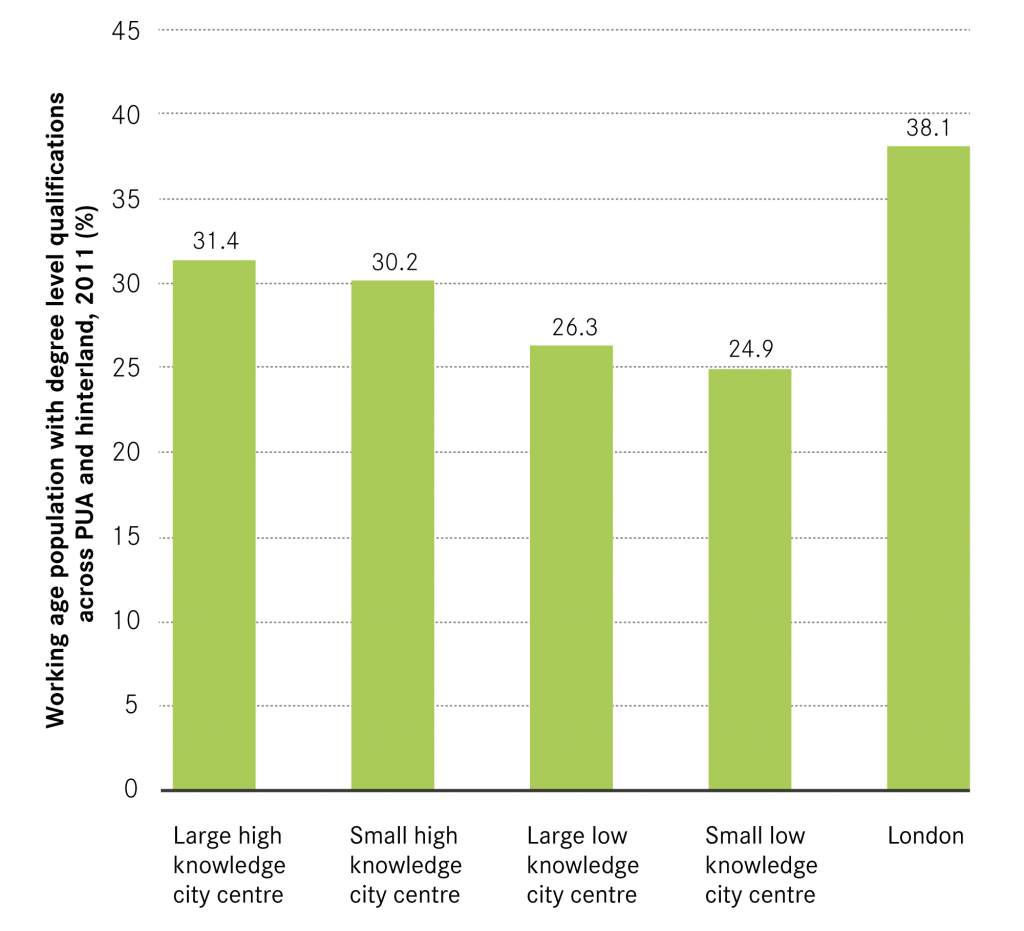 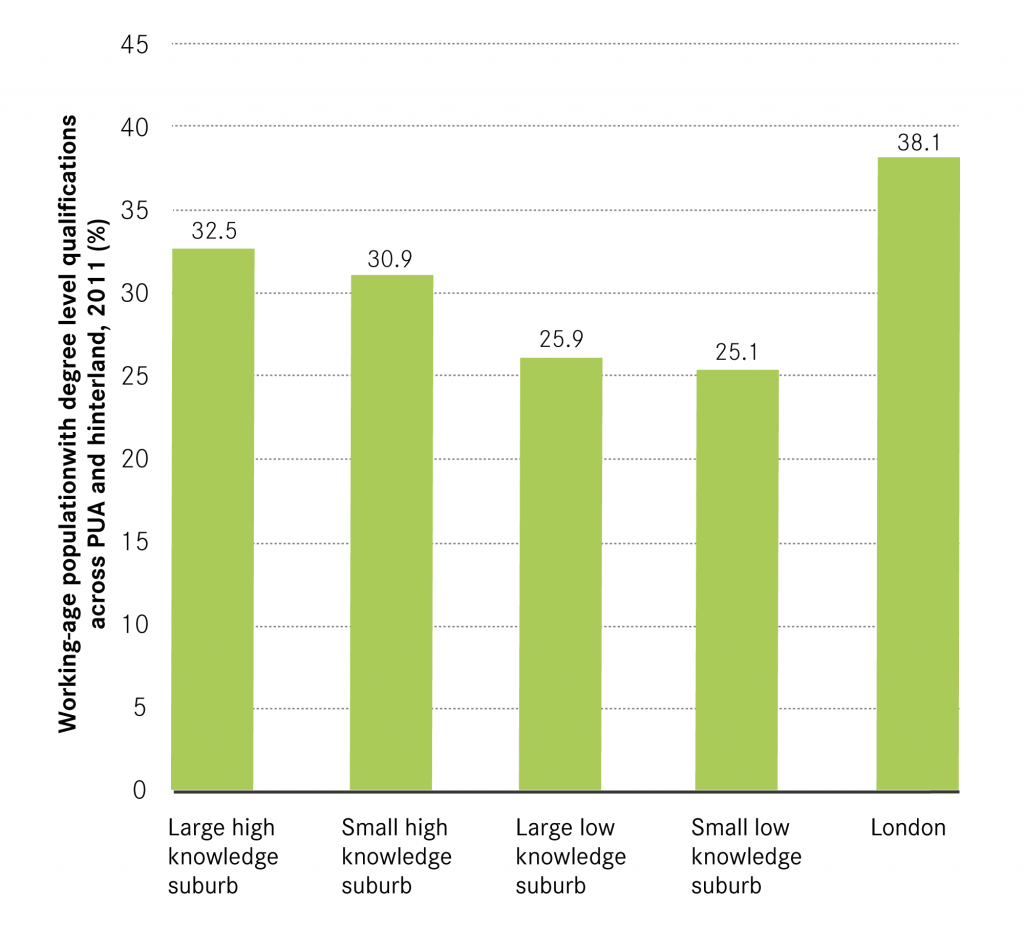 This relationship holds at city level where cities that offer better access to deep pools of skilled workers tend to have more highly skilled exporting jobs. Across all cities, there is a positive relationship between the proportion of the working-age population within the city’s wider hinterland, graduate level qualifications and the share of jobs in the export base that are high skilled (Figure 9).

Figure 9: Relationship between percentage of the working-age population with degree level qualifications and the skill profile of exporting jobs in cities 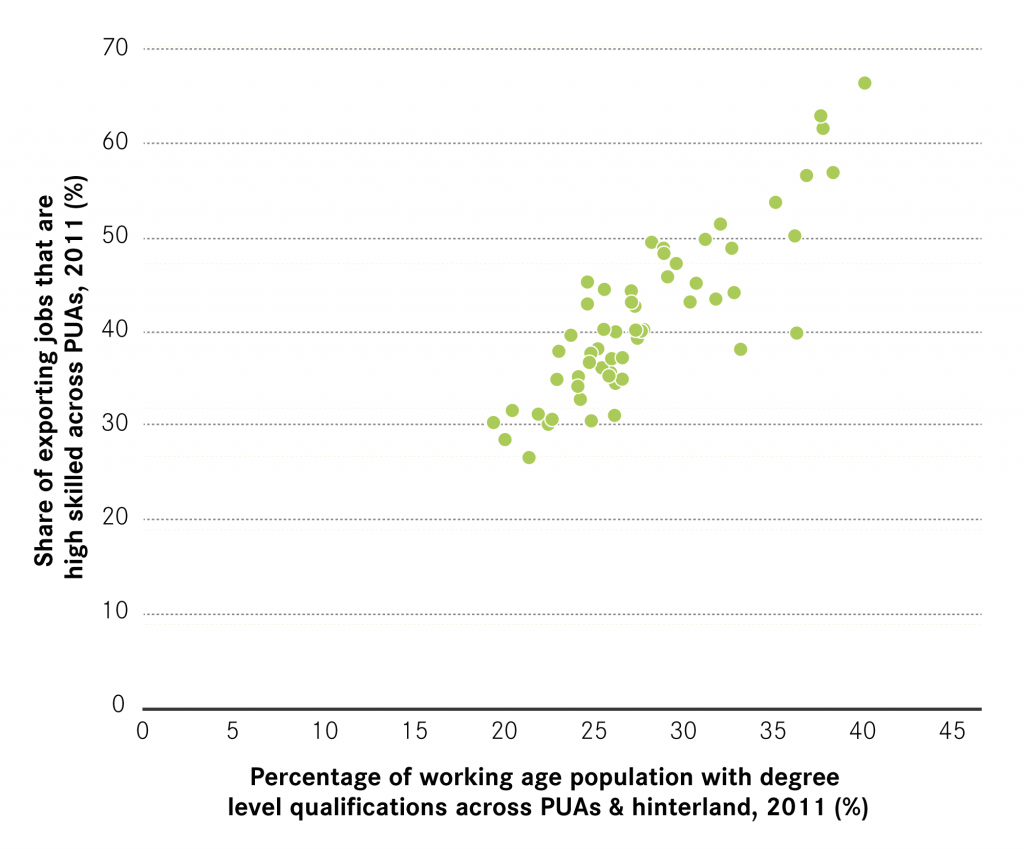 Cities with a bigger share of high-knowledge exporters tend to have dense city centres. Policy makers should aim to encourage firms to locate in city centres through strategic planning, public realm and transport improvements. 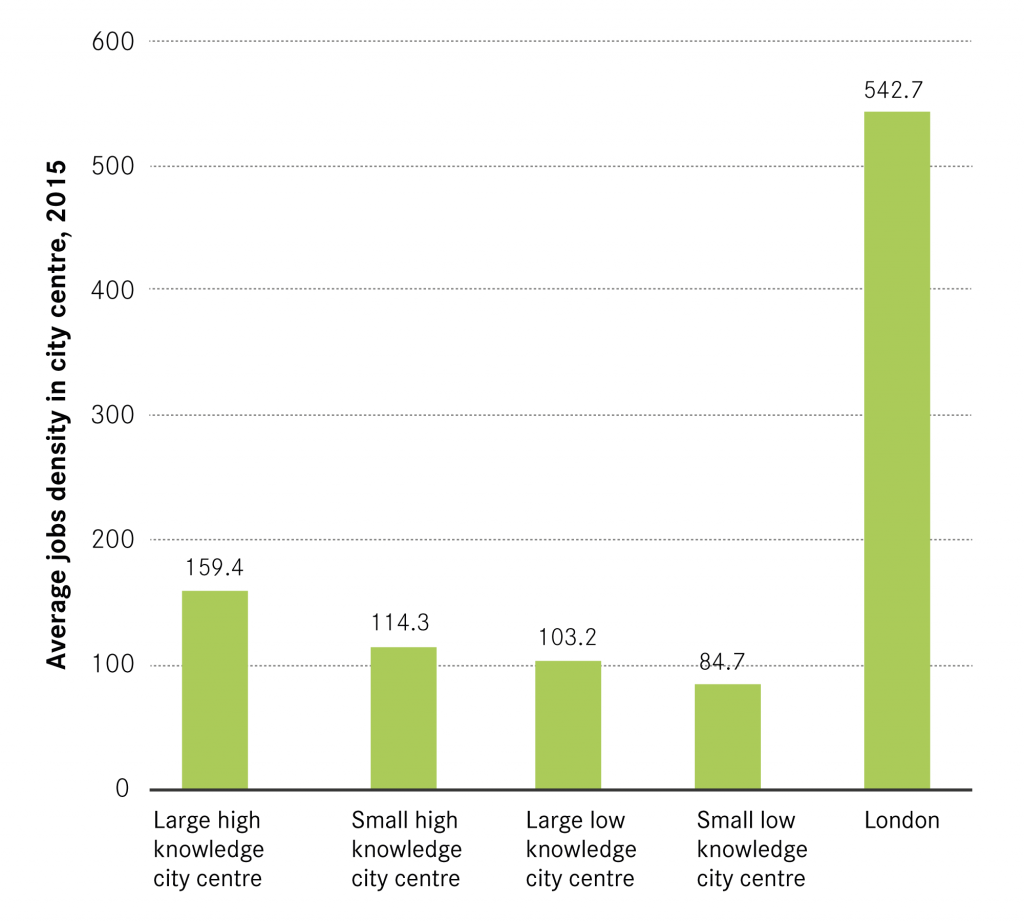 The relationship between density and knowledge exporters is also evident when looking at the nature of the export base across individual city centres (Figure 11). On average, city centres that are more dense have a higher proportion of high skill export jobs.

Figure 11: Relationship between density of jobs and the skill profile of exporting jobs in city centres 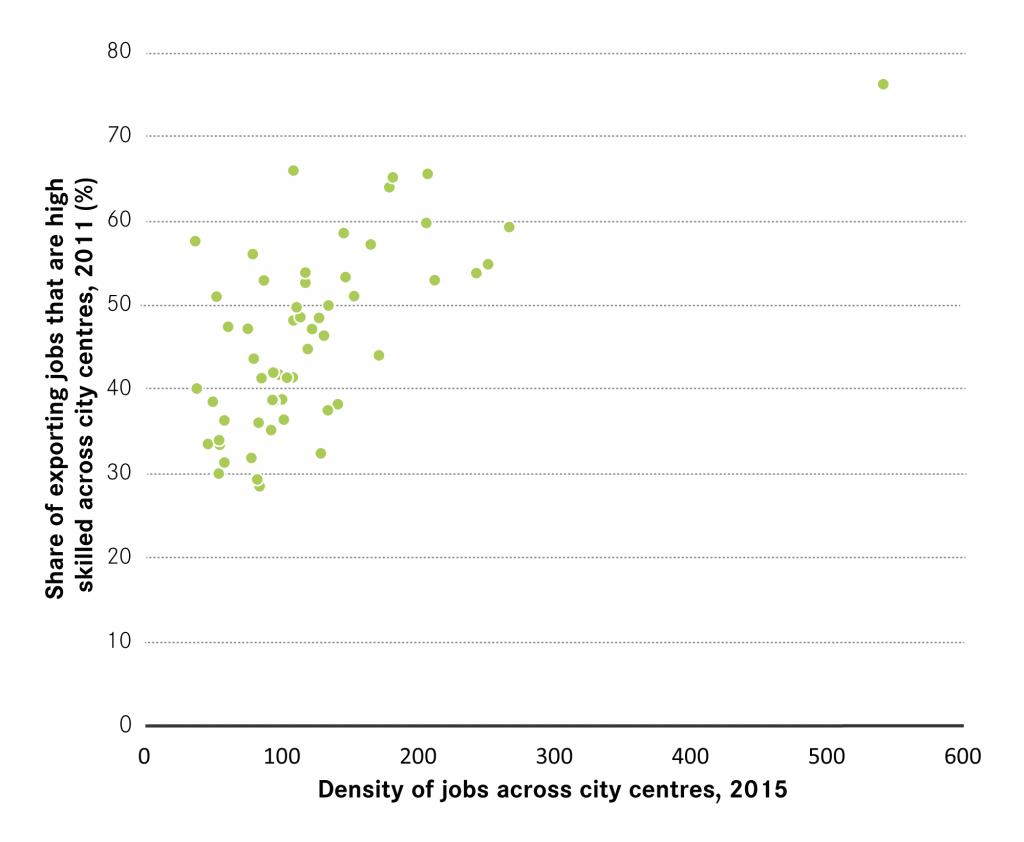 There is also a positive relationship between density and high-skilled exporters in suburbs. The relationship is weaker compared to city centres, however, reflecting the fact that knowledge spillovers operate most effectively over dense, small geographic areas.

Cities with high-knowledge city centres and suburbs tend to be closer to London. While it is often more important to improve intra-city connectivity, improving the links between cities may help to boost the export base.

City centres with a ‘large, high-knowledge’ export base are closer to London – a proxy for a large market-based on average travel times (see Figure 12). By contrast, city centres where the export base tends to be ‘large, low-knowledge’ are located furthest away from the capital. 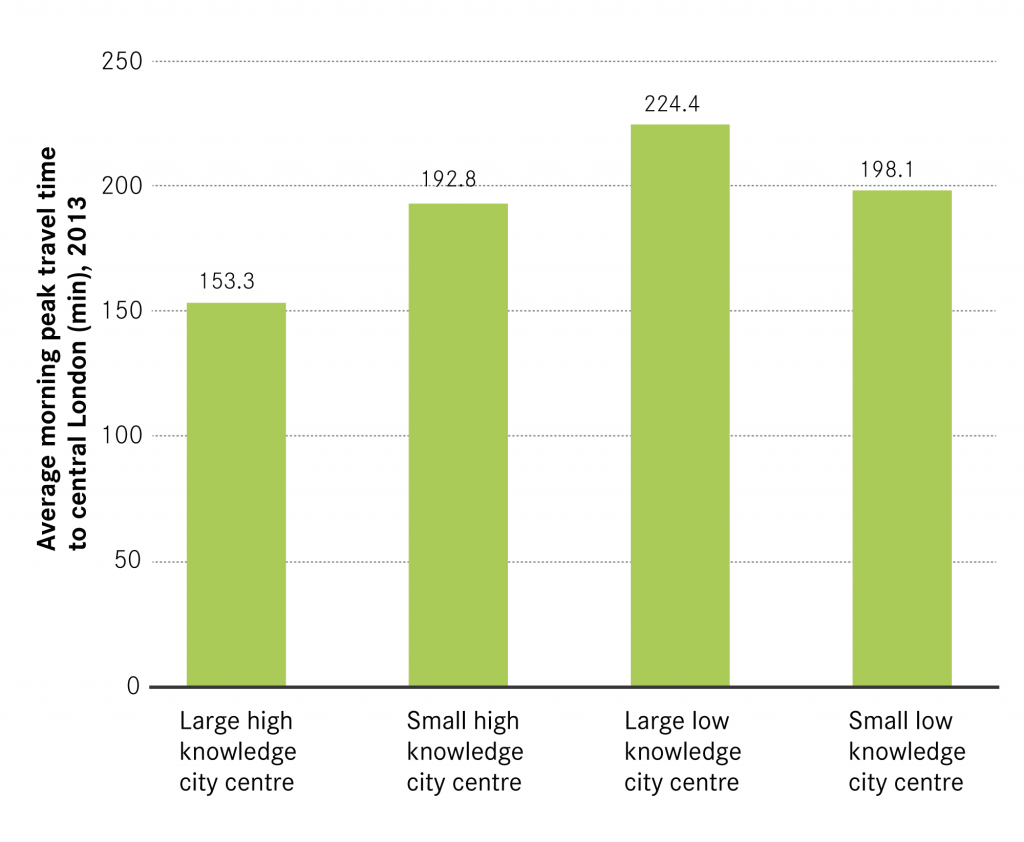 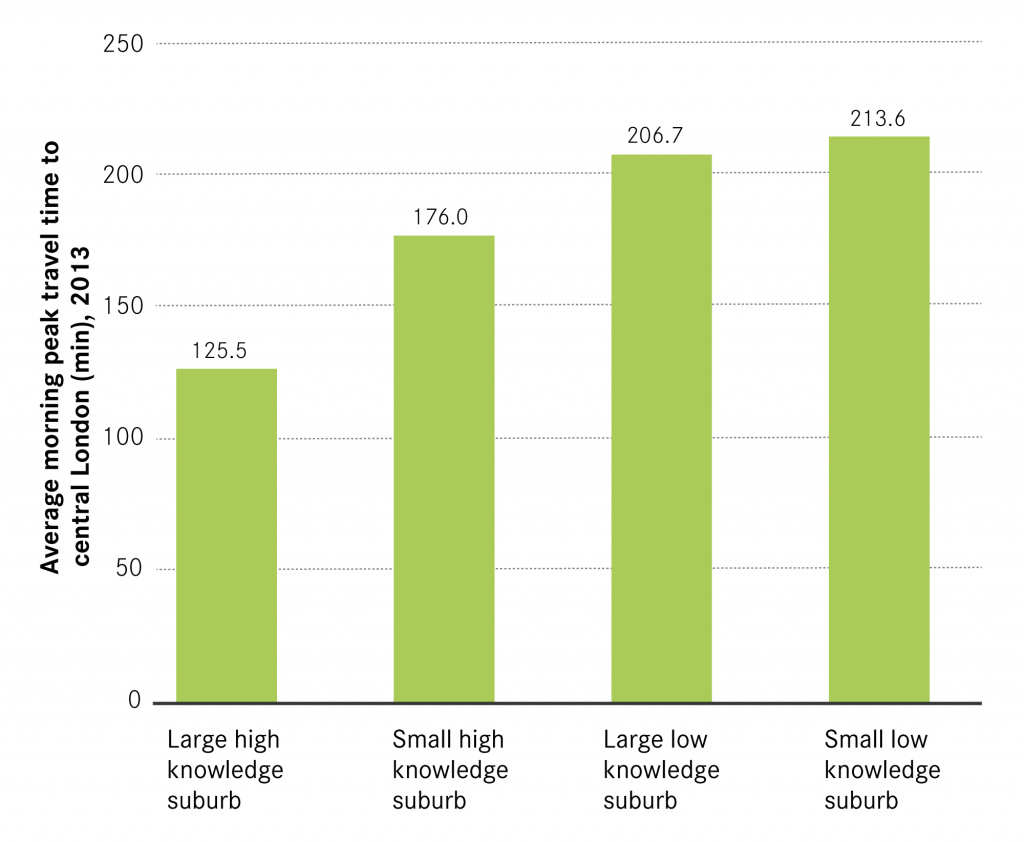 Cities with high-knowledge export bases tend to be located in the Greater South East and the further away a city is from London the less likely it is to have knowledge-exporting jobs. Across all cities there is a negative relationship between average travel times to London and the proportion of exporting jobs that are high skilled (see Figure 14).

Figure 14: Relationship between travel time to London and the skill profile of exporting jobs in cities 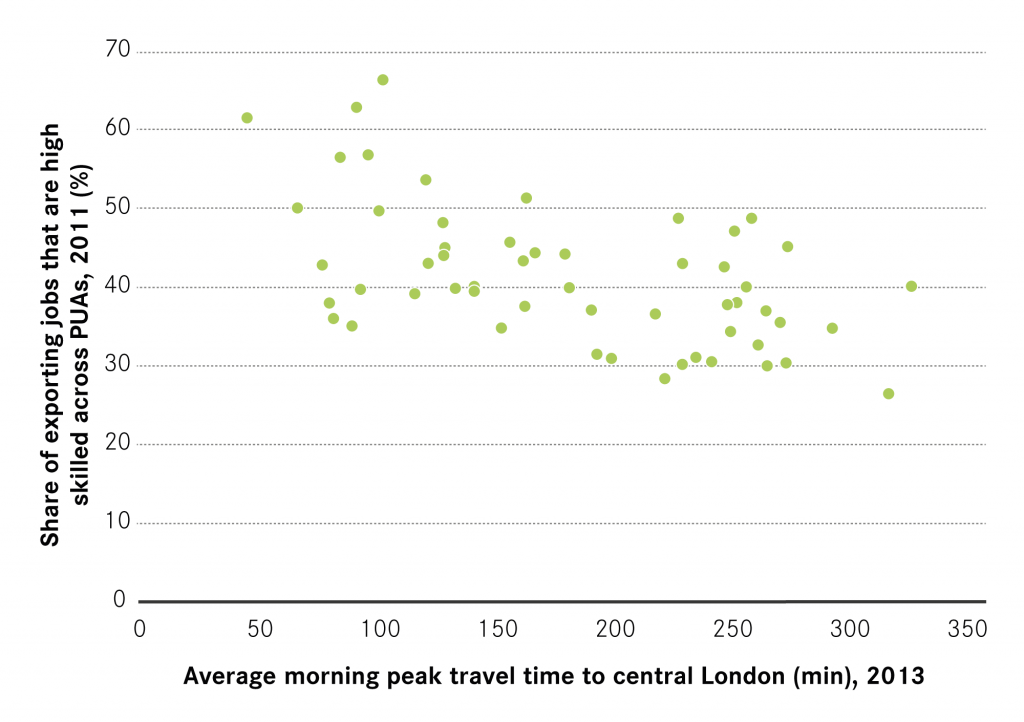 Although Britain’s knowledge exporters tend to locate in the Greater South East, not all cities in the region have a high-knowledge exporting sector. Less than 40 per cent of exporting jobs in Southend, Chatham, Luton and Crawley were high skilled.

Limiting the costs of co-location

Land and property costs tend to be higher in cities with large concentrations of high-skilled exporters. Managing the costs of growth by investing in public transport and maintaining the supply of affordable, high-quality business premises and housing will need to be balanced against policies to improve access to skilled workers and markets. 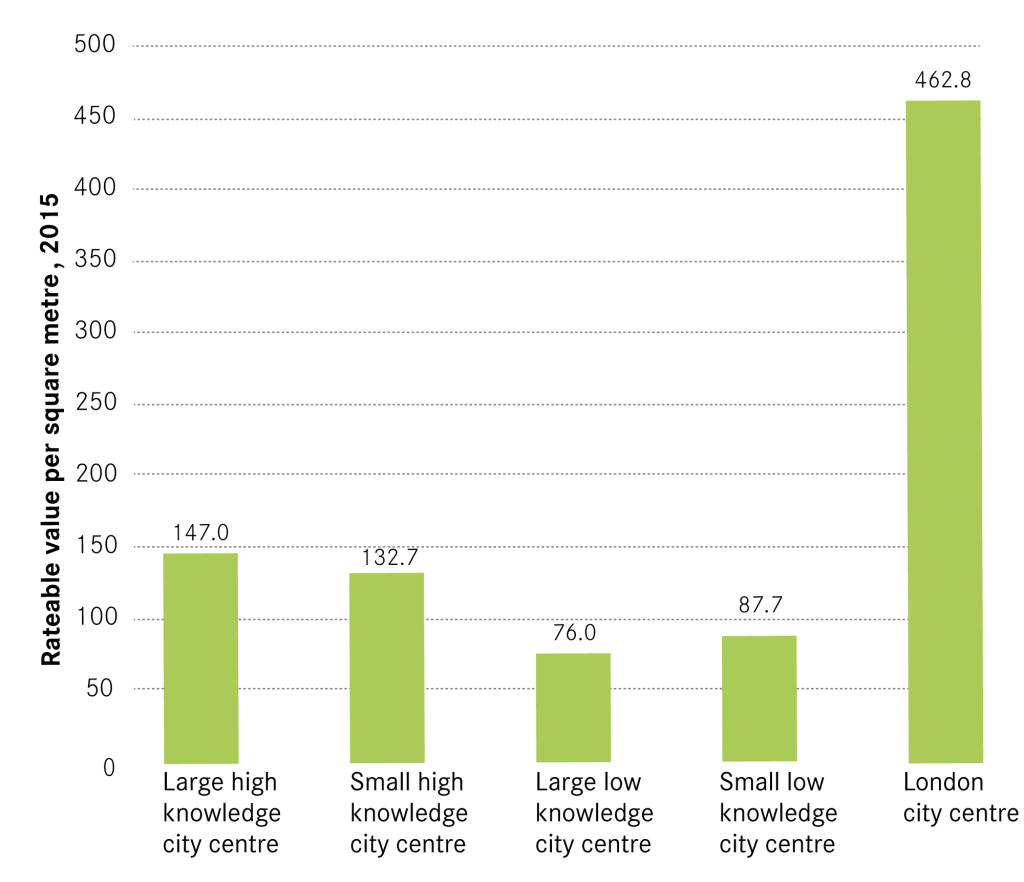 Those cities with a ‘large, low-knowledge’ export base in their suburbs have the lowest average land and property costs (see Figure 16). Average costs are highest in the suburbs with a ‘large, high-knowledge’ export base. Large export businesses are likely to benefit from the availability of low-cost land and property in ‘large, low-knowledge’ suburbs – export businesses in these areas employ an average of 16 employees compared to the national average of 10 employees. 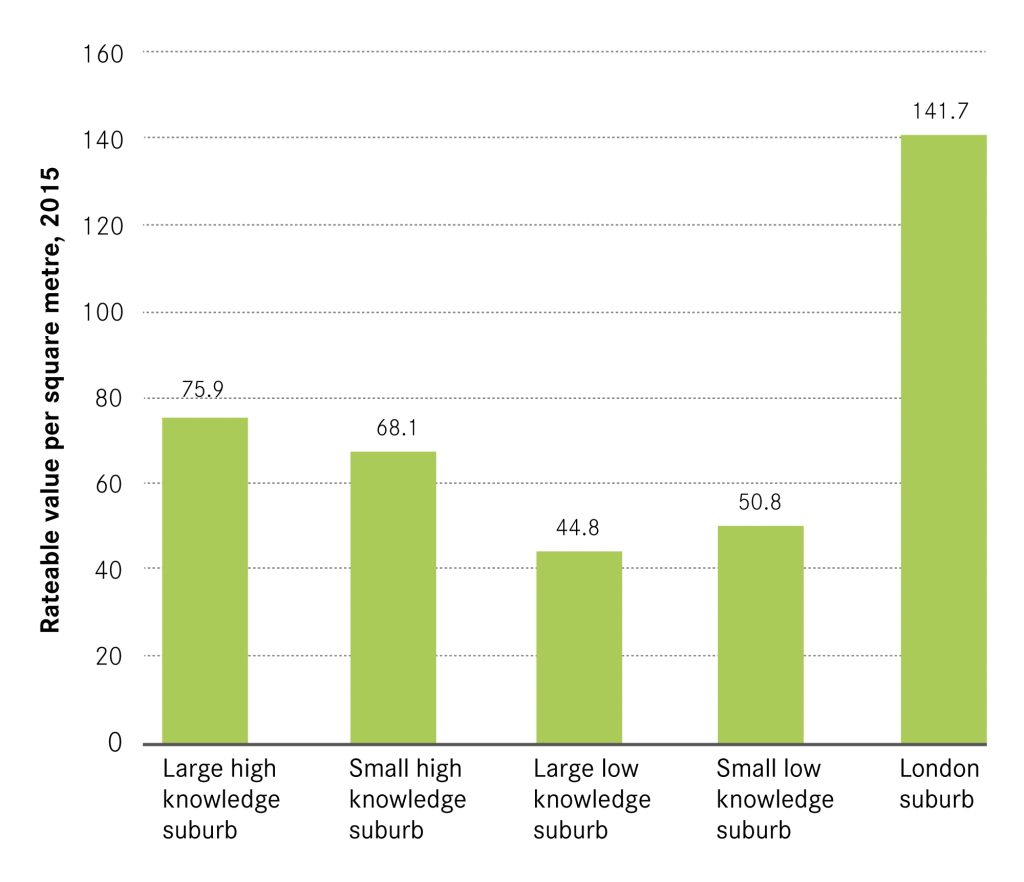 It is important that cities manage the costs of agglomeration in order to continue to attract and maintain knowledge exporters. Agglomeration benefits must at least initially outweigh costs; otherwise all economic activity would be geographically dispersed. The benefits to geographic concentration of economic activity are also often self-reinforcing, creating virtuous circles over time. However, at some point as a particular city grows, costs will begin to outweigh benefits and workers and firms will be better off choosing to locate elsewhere.