02Exporters play an important role in the national economy

Exporters, businesses that trade services and goods in Britain and overseas, account for over five million jobs in the UK economy. While exporters account for a smaller share of businesses and jobs compared to the local services sector (25 per cent of employment compared to 75 per cent in local services), exporters play an important role in the UK economy for several reasons:

It is for these reasons that the industrial strategy should focus on growing Britain’s export base if its strategic objective is to promote economic growth and boost productivity.

Having a large number of exporters does not necessarily mean a city is more productive, however – it is the nature of the export base that matters. Some cities have a large export base but are less productive: 35 per cent of jobs in Sunderland are in exporting firms 1.6 times the national average, but productivity (as measured by GVA per worker) is less than 90 per cent of the national average. In particular, cities that tend to have a larger proportion of their export-base jobs in the service-exporting sector are on average more productive than cities that tend to have a larger proportion of goods-exporting jobs (see Figure 1)

Figure 1: Relationship between productivity and the sectoral profile of exporting sector in cities 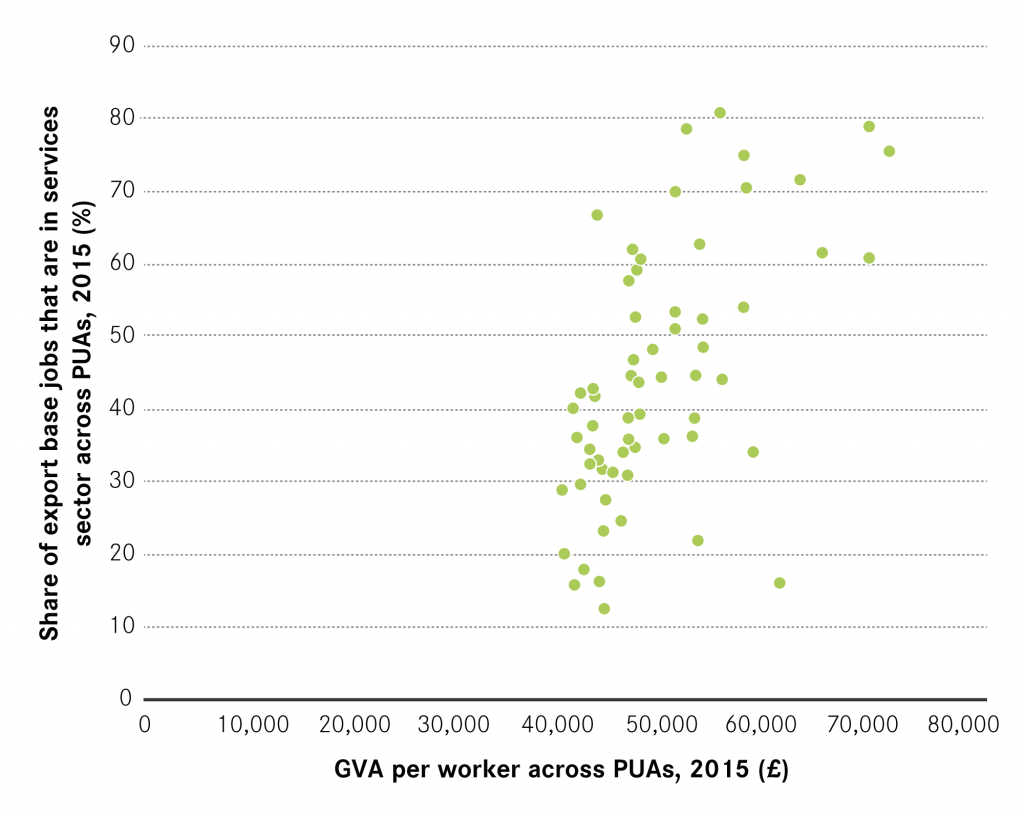 Figure 2: Relationship between productivity and the skill profile of exporting jobs in cities 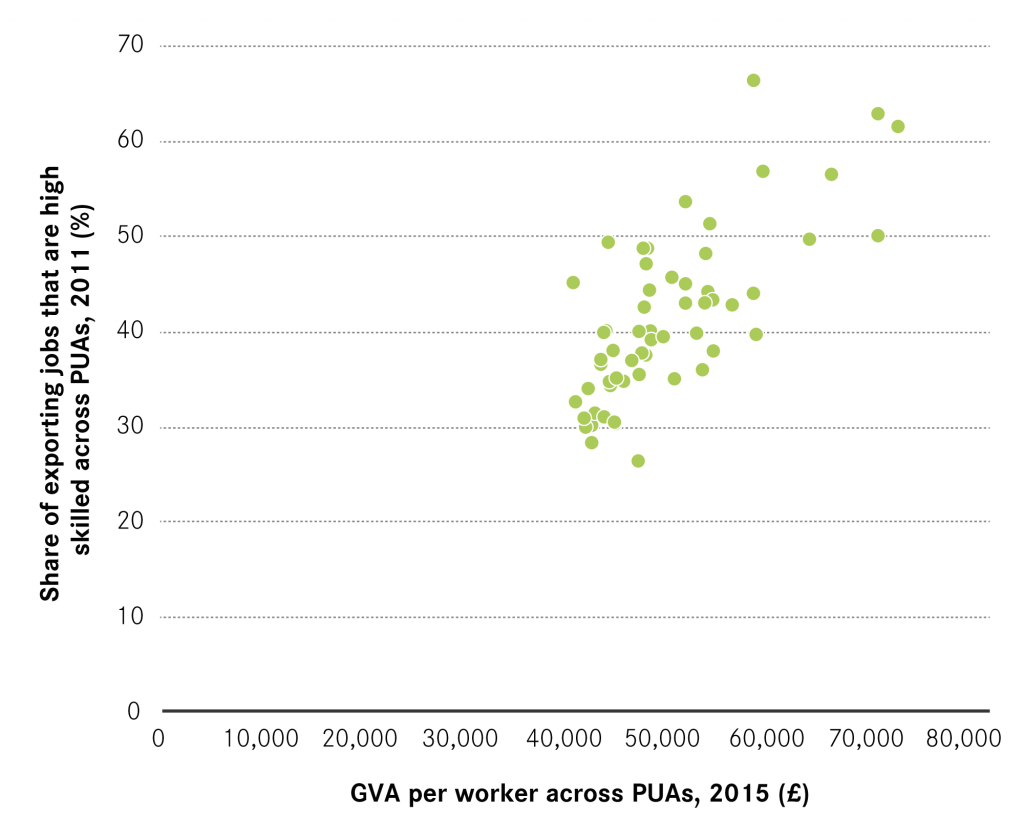 High-skilled exporters are particularly likely to concentrate in cities because of the benefits that are derived from co-location.

Exporters tend to cluster in cities because of the benefits that density and proximity bring – the returns to agglomeration. Agglomeration is the process by which concentrating economic activity in one place makes businesses and workers more productive.

There are three main mechanisms through which the benefits that businesses and workers derive from locating in close proximity to one another are generated:

The benefits businesses derive from being in close proximity to other businesses helps explain why British cities are home to 52 per cent of all businesses and 59 per cent of all jobs – despite covering just 9 per cent of land across the country. But the returns to co-location are higher for some types of firms meaning that some firms are more likely to locate in urban locations and this is true of exporters.

The export base varies across different cities

The size and nature of the export base in a city is driven in part by the place-based characteristics that cities offer different types of firms.

Businesses benefit from locating in cities whether they are located in city centres or suburbs but in different ways. High-skilled and knowledge-focused exporters tend to favour city-centre locations because city centres tend to be denser, which facilitates the exchange of knowledge and ideas.

Cities also offer important benefits to lower-skilled and more-routinised businesses but because access to knowledge and ideas are less important they are less likely to locate in dense city centres and are much more likely to be found in suburbs.

But city centres and suburbs do not play the same role in all cities which has an important bearing on the geography of exporters more generally.

This section examines the size and the skill profile of exporters across city centres and suburbs of different cities.

The analysis in this report makes a distinction between two parts of a city: city centres and suburbs.

City centres are defined based on all the postcodes that fall within a circle from the pre-defined city centre point. The radius of the circle depends on the size of the residential population of a city and its size is as follows:

Suburbs are defined based on the postcodes that fall within the rest of a city (defined as primary urban areas (PUAs), the standard definition of cities that Centre for Cities uses). In some areas, the suburbs will include towns, such as Oldham in Manchester.

City centres with a large proportion of exporters also tend to have a more highly-skilled export base.

Figure 3: Relationship between the size of the export base and the skill profile of exporting jobs in city centres 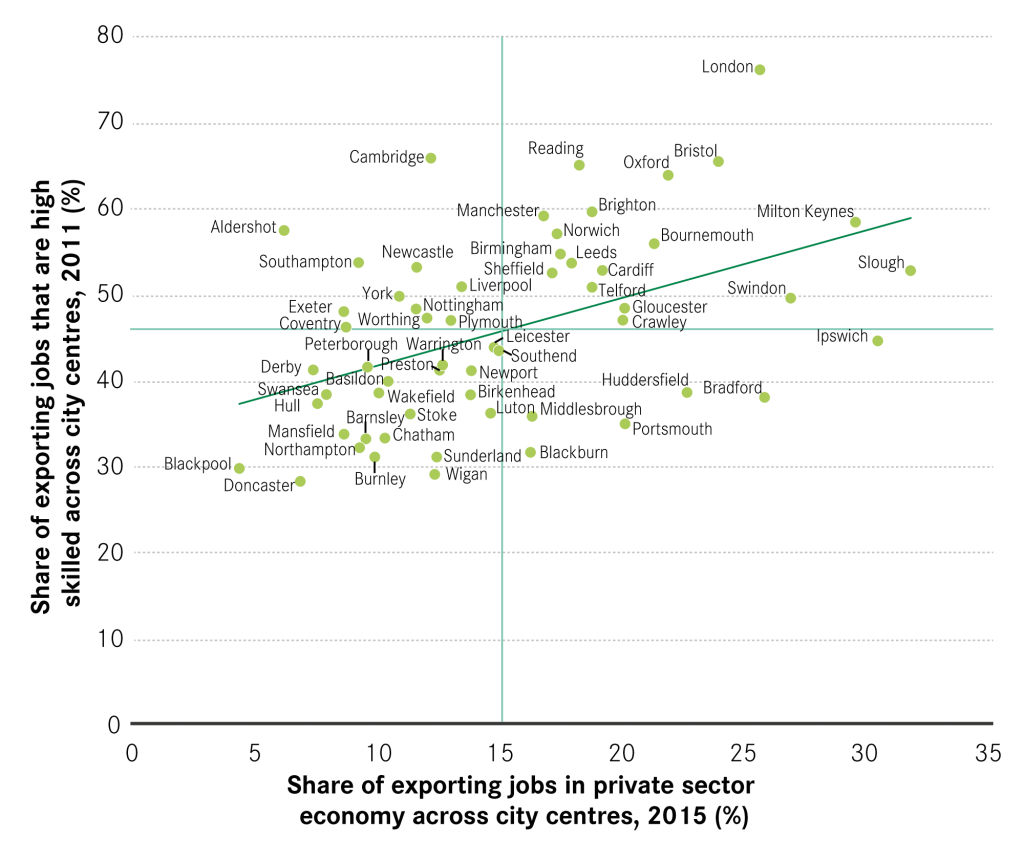 Some city centres have a relatively small, high-knowledge export base. City centres in this category included Aldershot, Cambridge, Coventry, Exeter, Liverpool, Newcastle, Nottingham, Plymouth, Southampton, Worthing and York. In Cambridge and York in particular, their historic city centres have tended to constrain city centre development, which means that high skilled exporting businesses tend to locate in their suburbs.11

The larger the export base in a suburb, the lower skilled those jobs tend to be

The suburbs of Burnley had one of the highest concentrations of export jobs – 39 per cent of jobs were in the exporting firms, 12 percentage points higher than the city average. But less than a third of these jobs were high skilled, compared to 40 per cent across city suburbs as a whole. Similarly, in Sunderland 38 per cent of jobs in the city’s suburbs were in the exporting businesses but just 26 per cent were high skilled.

In contrast, just 18 per cent of jobs in London’s suburbs were in the exporting firms but more than half (54 per cent) of those jobs were high skilled. The proportion of jobs in the exporting firms in Exeter’s suburbs was also low, less than 17 per cent, but nearly half of those jobs also tended to be high skilled (49 per cent).

Figure 4: Relationship between the size of the export base and the skill profile of exporting jobs in suburbs 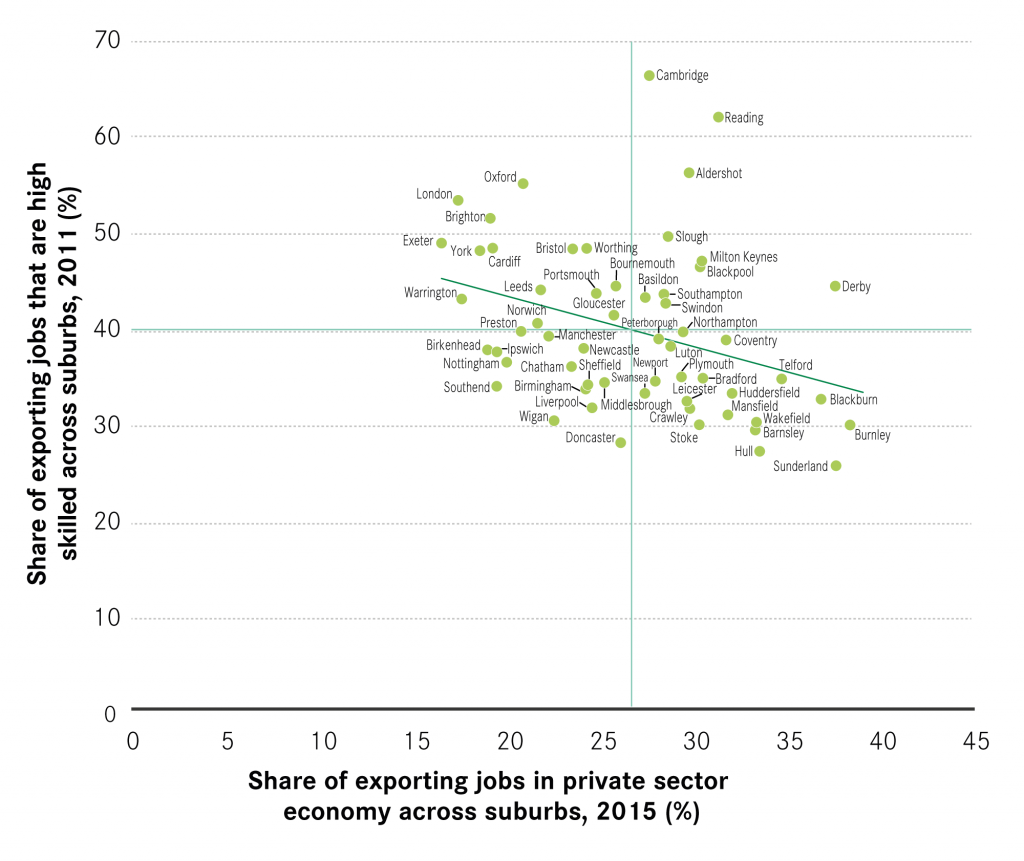 The export base in the suburbs of Aldershot, Cambridge and Reading were large and highly skilled. A far larger proportion of jobs in Cambridge’s suburbs were in the exporting firms, 28 per cent, compared to its city centre, and two in three of those jobs (67 per cent) were high skilled. Data shows that all three cities had a relatively high concentration of R&D activity. This type of activity tends to be high skilled and concentrated in suburbs (see the Cambridge case study).12